Kenway Family In Assassin’s Creed Franchise: Everything To Know About Them 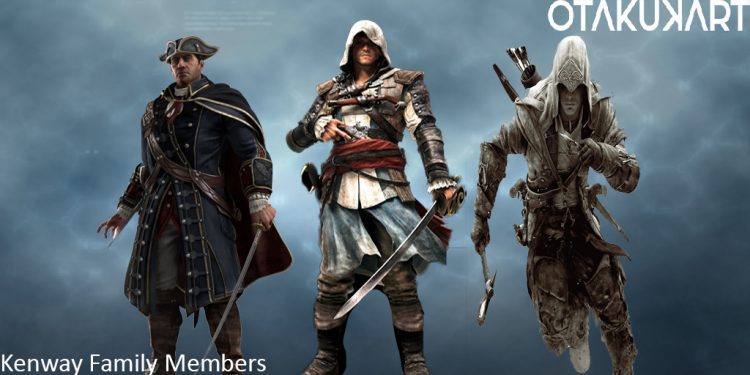 Desmond Miles had many great ancestors like Altair and Ezio family, but one other prominent ancestor family in the Assassin’s Creed series was the Kenway family. The Kenway Family was a wealthy family during the Golden Age of Piracy and the American Revolution. This article will discuss every key member of the Kenway Family that influenced the Assassin’s Creed world. Assassins Creed III is an action-adventure video game by Ubisoft in 2012. It follows two storylines of Haytham Kenway as Templar and Ratonhnhake:ton, or Connor as an Assassin, and their struggle to gain control of the colonies during the American Revolution. The game received positive ratings after its release. It has sold 7 million copies.

Assassins Creed IV is an action-adventure video game by Ubisoft in 2013. The game follows the storylines of Edward Kenway and his journey to get the riches, where he gets embroiled in Assassin Order and Templars Order war. The events of Assassin’s Creed IV take place during the Golden Age of Piracy. The game was a bit different from other Assassin’s Creed games as it allowed the players to explore the vast world in the Ships. The game was successful critically and economically, selling over 10 million units. Assassin’s Creed IV Black Flag: Freedom Cry follows the story of Adewale, the right-hand man of Edward in ACIV.

Key Members of the Kenway Family:

Edward Kenway was the son of Bernard Kenwway and Linette Hopkins. He met Caroline Scott and later married her. After marrying her, Edward wanted to provide her with everything, so he became a Privateer and set sail to West Indies. After the end of the War of the Spanish Succession, Edward became jobless. So he turned to the world of piracy along with Edward Thatch and Benjamin Hornigold.

He first learned the existence Assassins Order and Templar Order in 1715, where he accidentally killed an assassin, Duncan Walpole. Edward wore his assassin outfit. He later learns that Walpole was to get money in exchange for information, so he went in disguise of Walpole and gave the information. The information was the location of Caribbean Assassins headquarters, to Grandmaster of Templar Order, Laureano de Torres y Ayala.

Edward later found out everything about the two orders, but even so, he wanted nothing more but riches. This selfishness resulted in the death of several of his friends and family members. These events impacted Edward very much, and he aligned with Assassin Order and worked with them to protect the world’s peace. He then met his daughter Jennifer Scott from his first wife, Caroline. He joined British Assassin Order, and in the disguise of Enterprise owner, he traveled many places for the Order’s related works.

Edward later married Stephenson Oakley and had a son, Haytham Kenway. On Haytham’s tenth birthday, an employee of Edward, Reginald Birch, who in reality was the Grandmaster of the London Templar Order, orchestrated the murder of Edward. Birch burned his house, kidnapped and sold Jennifer, and indoctrinated Haytham into Templar Order.

Also Read: Assassin’s Creed Valhalla Wrath of the Druids: All About The New Expansion

Haytham had started the search for his father’s death. He later learned that Edward’s true allegiance was with the Assassin Order. Reginald Birch did everything to cover his involvement in Edward’s murder. He then killed the leader of the British Assassin Order and took the key of Grand Temple Key. Birch then sent Haytham to find the Grand Temple in the colonies. He then met a member of Kanien’kehá:ka, kaniehti:io. Here he started the Colonial Templar Rite.

During this expedition, he learned about Jennifer Scott’s whereabouts from Charles Lee. He then started his search for her and found her in Damascus, where she told him that the perpetrator of Edward’s Death was Reginald Brich. Both Haytham and Jennifer find and kill Birch. He returns to America, and with Assassin-turned-Templar Shay Cormac, he almost removed the Assassin order of America. Haytham’s many plans came to foil when a new assassin, Connor, came. To further increase the influence of Templars, Haytham decided to murder George Washington and put Charles Lee in charge. Connor foiled this attempt. Haytham later learned that Connor is his son and even saved him once from an execution.

Haytham and Connor once formed a truce to capture a mutual target named Benjamin Church. The relation between Connor and Haytham strain, and Connor started hunting the templars for the Grand Temple key. To protect the key, Haytham gave it to Charles Lee. Haytham died fighting Connor with his hidden blade.

Also Read: Does Arno end up with Elise? What Happened Between the Assassin’s Creed Duo?

Ratonhnhake:ton was born when his mother Kaniehtí:io met Haytham and had a brief relationship. Kaniehtí:io then found out about Haytham’s true allegiance and asked him to leave. Ratonhnhake:ton was raised by his mother and her clan members. At age four, Charles Lee and his Templars assaulted him and asked the whereabouts of his village, which he refused. They knocked him out, and when he came to his sense, he went back to his village, which was burning. He tried to protect his mother but could not. This event created a burning passion for revenge against the perpetrators.

He finally found out why his people were not allowed to leave the village, and it was a crystal ball, Piece of Eden. One day he was contacted by Juno, an Isu Civilization member, who asked him to join the Assassin Order to protect the Grand Temple from Templars. He went to Boston and asked Achillies, a former Assassin, to train him. Achillies denied the plea several times. He finally agreed to train Ratonhnhake:ton when he fends off thugs from Achillies’ estate. Achillies later led Ratonhnhake:ton to a hidden basement where all the Assassin-related stuff was present. He led Ratonhnhake:ton to a wall where all the Templars leaders’ names were displayed, along with Haytham’s.

Connor fought to revive the Assassin Order of America back as when he arrived; the Order was in shambles. He tried a truce with the Templars, which did not work well. When he found out the truth of his Village massacre from Haytham, he was furious and cut all his ties with him. Then he started his Assassin work again by searching for the Key of Grand Temple. He learned that Haytham had it. Haytham gave the key to Charles Lee to prevent Connor from getting it. Connor killed both Haytham and Lee and retrieved the key. Juno contacted Connor again and asked him to hide the key, which he did.

Jennifer Scott was the first daughter of Edward Kenway from his marriage to Caroline Scott. She was raised solely by Caroline, so she kept her title name Scott instead of Kenway. She met Edward at age seven when her mother died. Jennifer Scott was renowned beauty in her younger days and wanted to learn the ways of Assassin, but Edward did not teach her.

In her twenties, she found Reginald Birch’s Templar allegiance, which she tried to tell her father. At the same time, Birch orchestrated the murder of Edward, burned his house, sold Jennifer to Turkish slavers. In her forties, Jennifer was sent to Damascus as a concubine for the Ottoman governor in charge, As’ad Pasha al-Azam, but was too old to be a concubine and instead worked as a servant.

When Haytham finally found her, she told the truth about the Birch to him. Together they attacked Birch and Jennifer killed Birch herself. She returned to London and lived in one of his father’s mansions. She was disappointed in Haytham as he remained with the Templars even after finding out about Birch. Jennifer remained unmarried till the day she died in 1805. She had always wanted Templar and Assassin to unify.