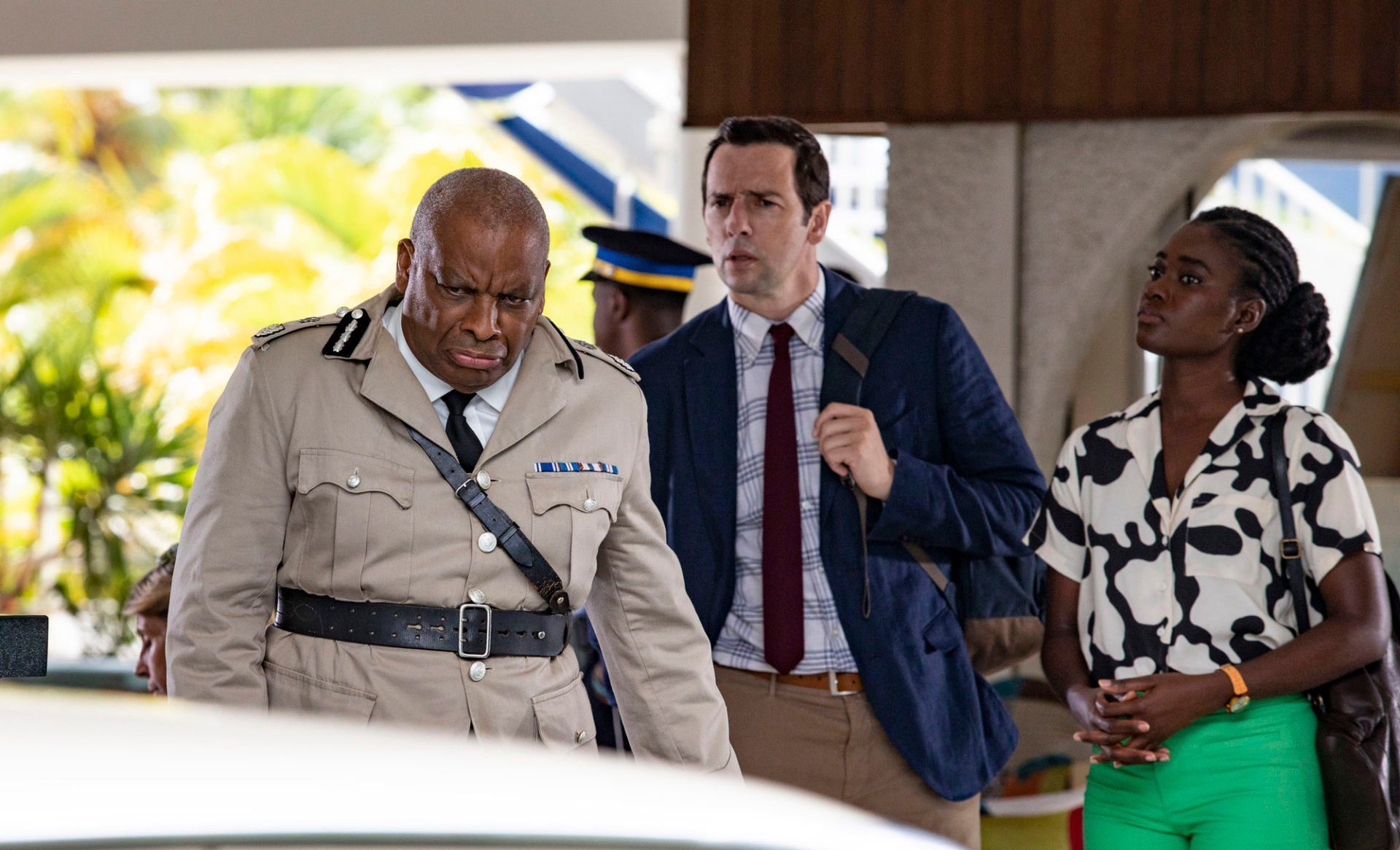 Commissioner Selwyn Gets The News That He Has A Daughter

On February 25, the BBC’s Death in Paradise’s latest season came to a conclusion. With fresh arrivals, unexpected suspicions, and one final mystery to solve, the season 11 finale was a huge one. The team scrambles to figure out how – and why – a prestigious chess match ends in murder. The investigation, however, is soon complicated by a flashback for the Commissioner.

Everyone engaged prefers to play the game of love. Even familiar faces from Saint Marie are expected to appear in Series 12, implying that some exciting things are in store. Neville (Ralf Little), eager to move on from his emotions for DS Florence Cassell (Josephine Jobert), chooses to test out dating apps for his most difficult case yet: figuring out how to seduce the opposite sex. His new partners, DS Naomi Thomas (Shantol Jackson) and Darlene Curtis (Ginny Holder), are there to help him out. Neville’s search for love has been evident since his entry into Saint Marie, and while Florence hasn’t reciprocated his sentiments, it’s clear that he has a good heart and a lot of love to give.

And, based on the fact that he was swiftly matched up with someone on the dating site, it may be paying off sooner than expected. It appears that Harry the Lizard will have to compete for Neville’s attention. Will the lovely and lovable detective eventually find someone to share his feelings within Death In Paradise Season 12? What can we expect from season 12 of Death in Paradise? Is there anyone here now? When can we expect to see it on our televisions?

The criminal cases solved by a Detective Investigator team that has varied over the years are told in Death in Paradise. It usually consists of a British detective and a team of police officers from the Caribbean. Now, without wasting any time, let’s get started on Death In Paradise Season 12.

What Happened In ‘Death In Paradise Season 12 Episode 8’? Recap

Maggie Harper, a journalist, began the show by interviewing chess champion Julius about his years of accomplishment. He was fighting to breathe and collapsed during the chess championship versus the up-and-coming Lucas Magnussen (Anders Hayward). The fact that Neville Parker (Ralf Little) had been poisoned was found by his team, but that was not the only mystery. 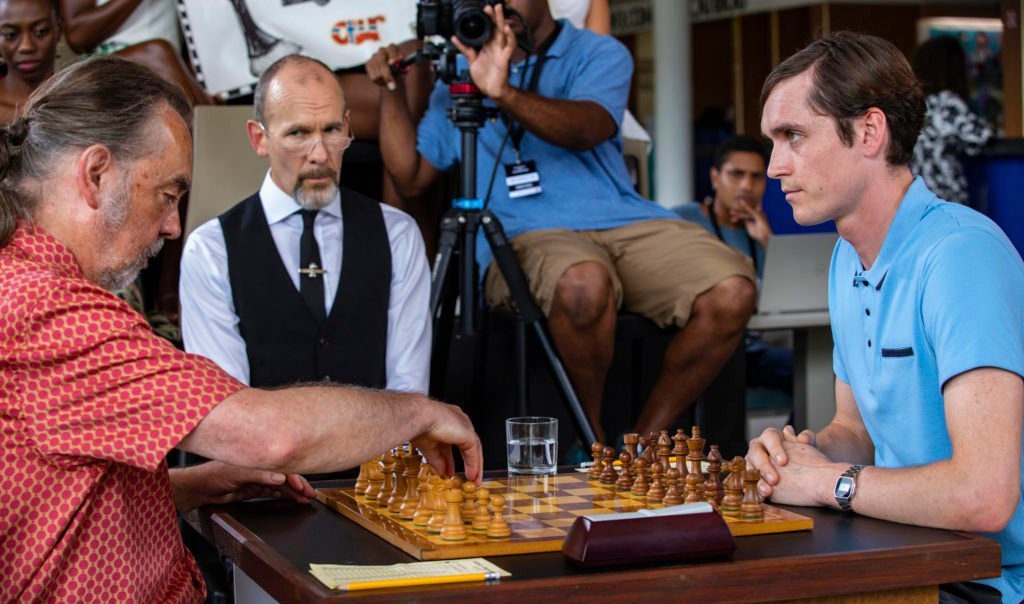 Maggie was particularly taken with Commissioner Selwyn, who appeared to be upset when he saw her. He referred to her as a “friend of sorts” and claimed it had been “a while” since she had seen him. Maggie was the Commissioner’s ex-wife, according to Catherine Bordey (Elizabeth Bourgine). He went to see Maggie and told her that he had been a shock the day before. If he had appeared rude, he apologized.

Maggie would never believe Commissioner wasn’t glad to see her. He invited her to supper so that they could thoroughly catch up. Maggie confessed that she had been in a previous relationship but that her partner had passed away. She has a grown-up daughter as well. She appeared to be thinking about rekindling their romance, and they spent the remainder of the evening together, with the Commissioner admitting to being “mad and wounded” when their relationship ended.

Despite having had numerous relationships since Maggie, he never married again. They enjoyed a kiss on the beach after a deep talk. Due to Maggie’s involvement and personal connection with the commissioner, the murder investigation became more convoluted than before. The Commissioner was hurt by her betrayal, as she had destroyed part of a recording from her interview with Julius. Following her active engagement in the investigation, the Commissioner advised them to keep their distance. As part of a revenge plot, Maurice Holburne (Paul Brown) murdered Julius. 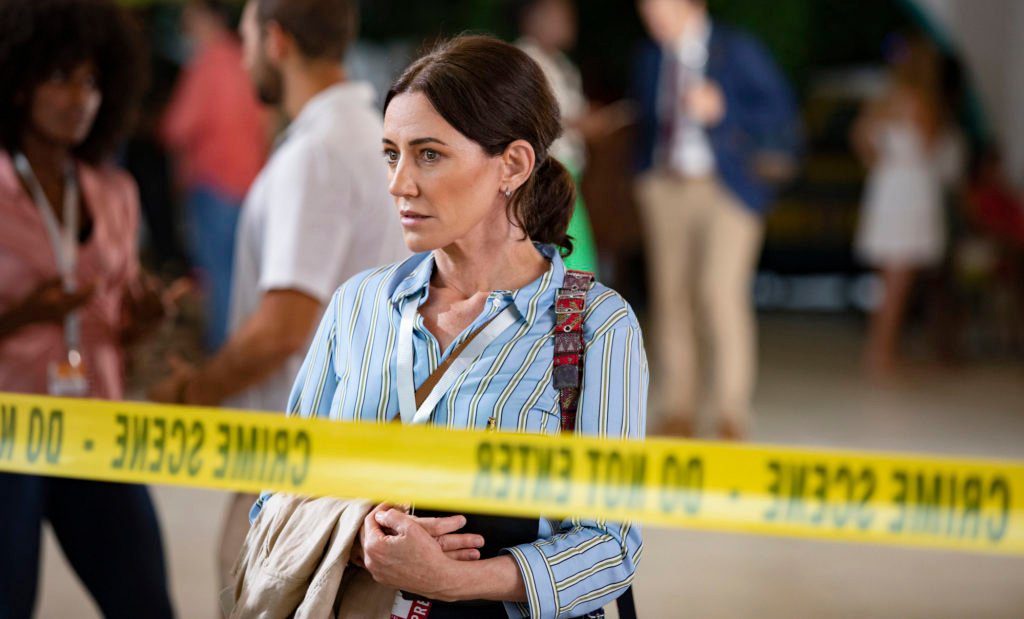 Orla Brady, who takes on the role of Maggie Harper

The Shocking Ending: Commissioner Selwyn Has A Daughter!!!

Maggie was on her way back to England after the case was settled when the Commissioner stated he needed to know more. She was lying to his cops behind his back one moment while they were as close as they’d ever been. And the truth is something he deserves to know. Maggie was concerned that he would despise her because Edwina, her daughter, was his. She showed him a snapshot on her phone, but the image on the screen was not visible to the spectators.

The Commissioner was taken aback by the news, but once he has processed it, he may choose to meet his hidden daughter. Maggie described her as a “very powerful and ambitious daughter” who would now be an adult. Selwyn could take a break from the island in the coming season to spend more time with his child.

He and Maggie parted on friendly terms, so they still have time to reconstruct the family they may have been. Edwina’s identity is unknown at this time, however, she appears to be identical to her mother. Following the departure of Florence Cassell (Joséphine Jobert), Neville was busy creating a dating profile. In the coming season, he, too, could discover a new love.

Fans of Death in Paradise will be happy to learn that the BBC has just renewed the long-running crime thriller series for a second season. Season 12 is expected to follow in the footsteps of its predecessors, with eight hour-long episodes. While the premiere date for Death in Paradise season 12 has yet to be confirmed, it is expected to premiere in the UK on BBC1 in January 2023. It will be broadcast in the United States at a later date. 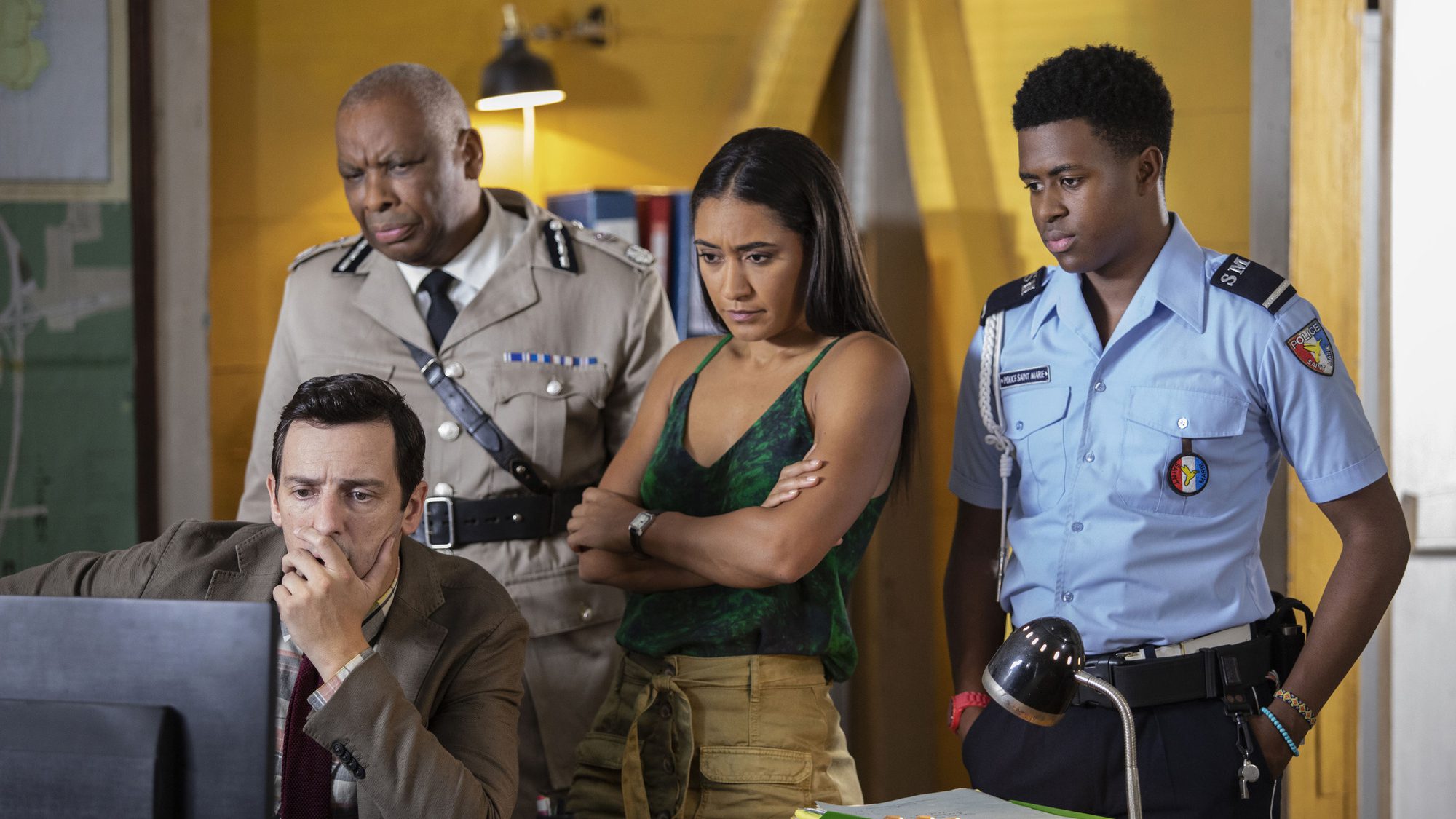 On Boxing Day 2021, the show’s first-ever holiday special, which broadcast on December 26, 2021, was the most-watched program. Following its success, the BBC has confirmed that a second feature-length Death in Paradise Christmas special will be released this year.

Don Warrington, who plays Commissioner Selwyn Patterson, confirmed that the group will be returning to Guadeloupe to film season 12 soon. They’re still in England, Warrington replied, and they haven’t started yet. He anticipates that they will begin in May. So he has no idea what they’ll do once they’re out there.

The new series’ plot is still a mystery. We do know, though, that all of the major characters have returned. Neville’s quest to get over Florence, who rejected him in season 11 of Death in Paradise, will undoubtedly continue. Meanwhile, both Marlon and Naomi’s plots should be developing. We can also anticipate additional instances for Neville to solve that are appropriately nefarious. Florence’s return will also be exciting to watch. And if Dwayne, who was last seen in the holiday episode, will be seen again.

Who Will Be Returning For Death In Paradise Season 12? – Cast

Season 12 will see several of the show’s most beloved characters return to Saint Marie. In addition to a brand new roster of killers, victims, and special guest performers, the upcoming series will include one of two new faces. Ralf Little, one of the cast members of the BBC drama, has been particularly evasive about his or her future on the show. However, Ralf Little’s return as DI Neville Parker for Death in Paradise season 12 has been announced. 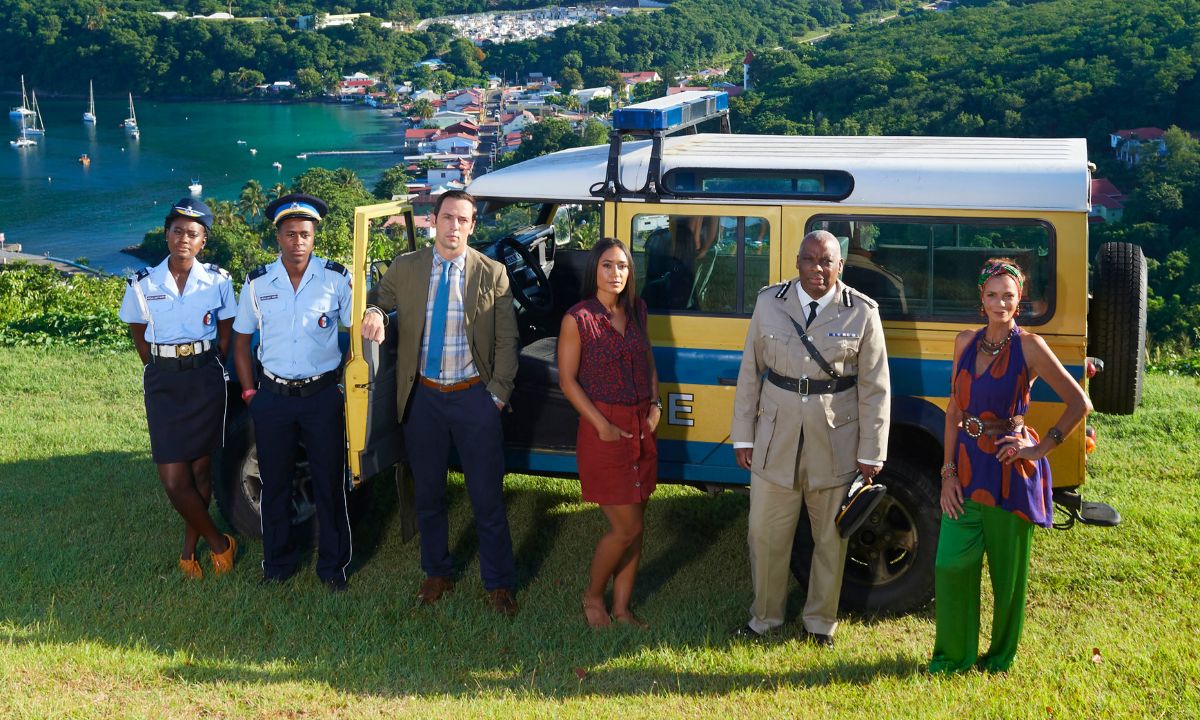 The Commissioner is likewise played by Don Warrington, the only surviving cast member from the show’s debut episode. Catherine Bordey will be played by Elizabeth Bourgine, who has been on the show since the first episode. Also announced for the new season are Tahj Miles (Officer Marlon Pryce), Shantol Jackson (Sergeant Naomi Thomas), and Ginny Holder (Darlene). Former actors like Florence Cassell (Josephine Jobert) and Dwayne Myers (Danny John Jules) could return for the upcoming season.

How To Watch Death In Paradise Season 12? – Streaming Details

BBC Studios is releasing Death in Paradise on DVD. The episodes are shown on BBC One in the United Kingdom, and France 2 on cable in France. On BBC iPlayer, the episodes will also be available. These one-hour episodes are rated TV-PG for parental advice and have a running time of one hour. On the above-mentioned date, at 9 p.m., you can watch the freshly released episodes on BBC One.

Depending on your interests, you can watch the eleventh season of Death in Paradise on cable networks or OTT services. Sky Go and Brit Box all have the show accessible. Death in Paradise episodes has just been released on PBS and Ovation in the United States and Canada.