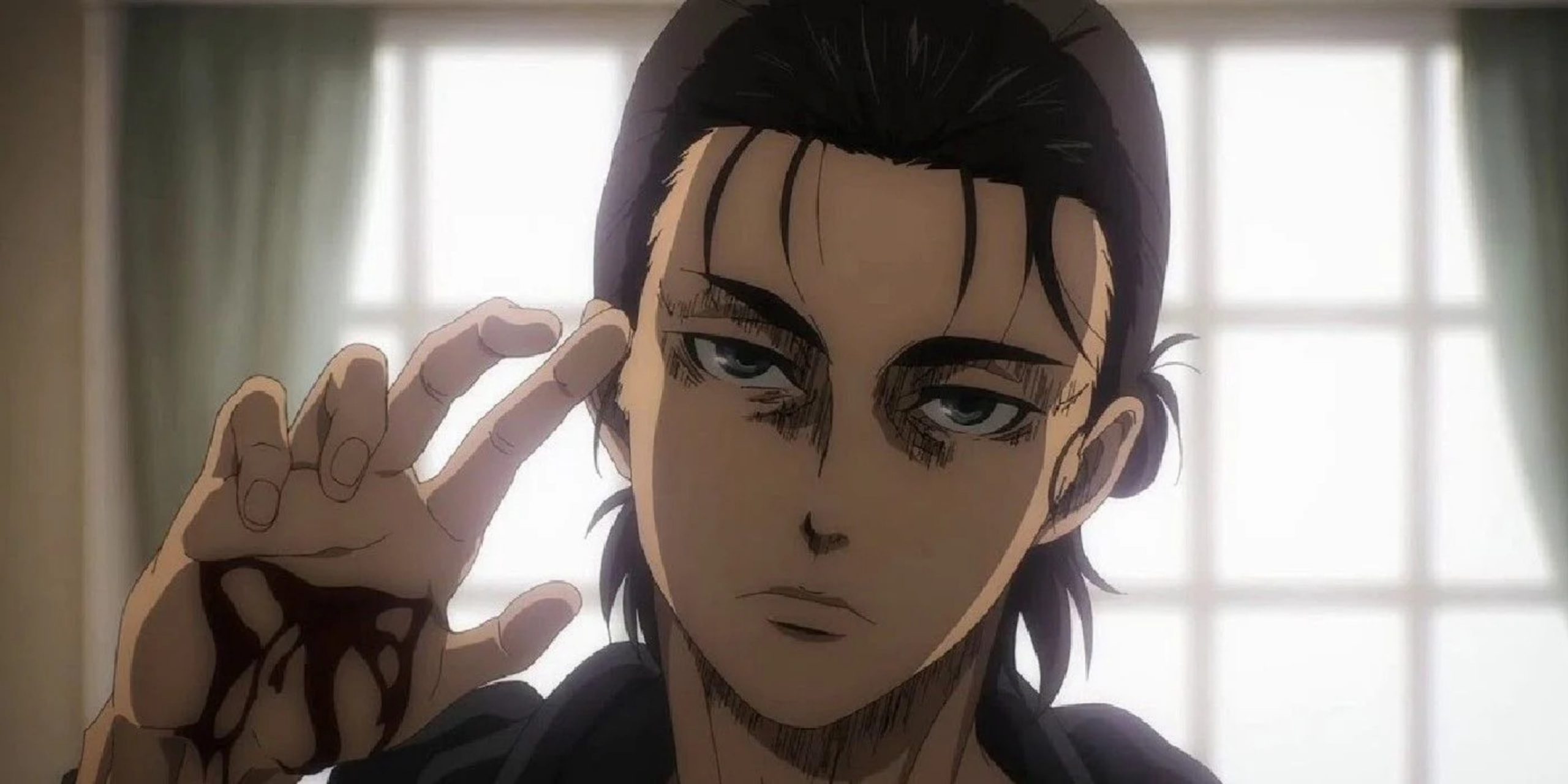 Attack on Titan fan’s all-time favorite manga and anime, the story that should not be missed in the discussion of shonen manga and anime. Even though the ending was predictable, Isayama made sure to complement the predictable outcome with several well-fabricated characteristics that added to the enjoyment of reading the manga. In this article, we will see Attack on Titan Ending and Eren’s Fate Explained.

Hajime Isayama’s manga has grown to become one of the most popular. It ran for 12 years in Kodansha’s Bessatsu Shonen Magazine. Isayama has crafted the story with so many delightful twists, each bigger and better than the last. Eren Yeager’s journey from wanting to eliminate all titans to becoming someone who can own them all was long and fascinating. It is worth applauding how the talented mangaka concluded the series. Attack on Titan Volume 34 featured exclusive extra pages written by Isayama. let’s see who is Eren? and Attack on Titan Ending and Eren’s Fate Explained.

It is believed that the last remnants of humanity live within three walls, which divide the regions according to class. Beyond the walls are gigantic creatures called “Titans” that eat humans, but the origins of their behavior and life are unknown. Since the titans broke the first wall, Eren Yeager’s mother has been eaten by a smiling titan. Having witnessed his mother’s death, Eren becomes determined to hunt down and kill these giants, and thus joins the elite bodyguards who specialize in tracking these giants: the Survey Corps.

Eren Jaeger is the main protagonist of Attack on Titan, which is also known as the manga and anime series with the largest fan following. The series follows the adventures of Eren, his friends Armin and Mikasa, and other characters as they try to survive in a world where humanity is under attack by the Titans, gigantic humanoid monsters that want to eat humans. The majority of the series takes place in the town of Shiganshina, which has been turned into a fortress to keep the Titans out.

Eren was so obsessed with joining the Scout Regiment as a child that he yelled at his mother and argued with her, calling the people in the village “silly” and comparing them to complacent livestock. He has been described as hardheaded, strong-willed, passionate, and impulsive, all of which reflect his strong desire to save humanity from the Walls. 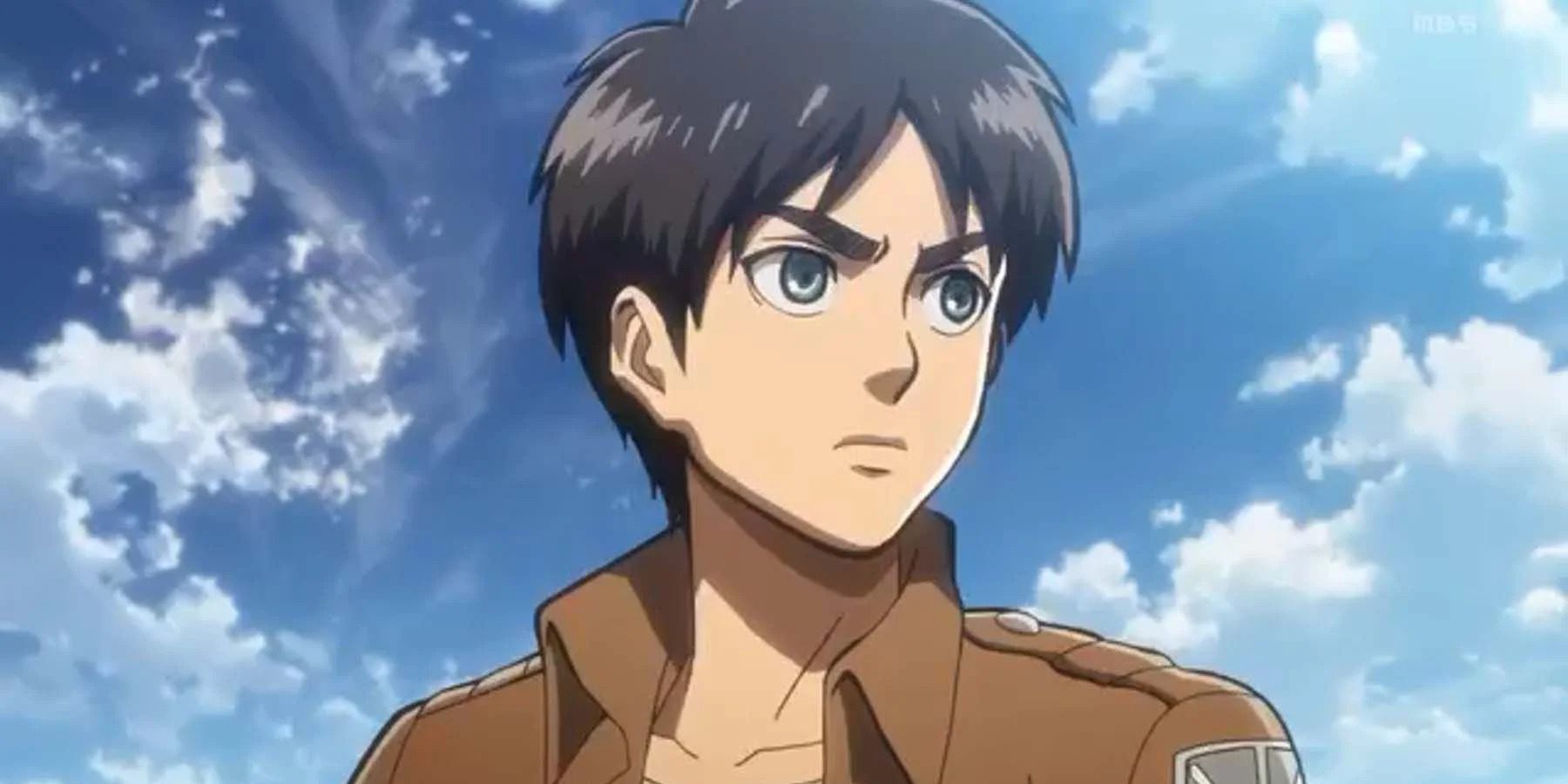 A compassionate child, Eren always went to great lengths to help the ones he loves, including his best friend, Armin, and most importantly, his family. This quality was often displayed by his willingness to take on bullies with no remorse; more tragically, during the Titans’ assault on Shiganshina, when he desperately tried to lift rubble crushing his mother.

The opposite is also true for Eren, who displays very violent behavior in the defense of people he is not even familiar with. He brutally slaughtered two human traffickers who captured Mikasa to rescue her, even though they were strangers at the time. Since losing contact with his father and witnessing the gruesome death of his mother, Eren has become even more protective of those he left behind. 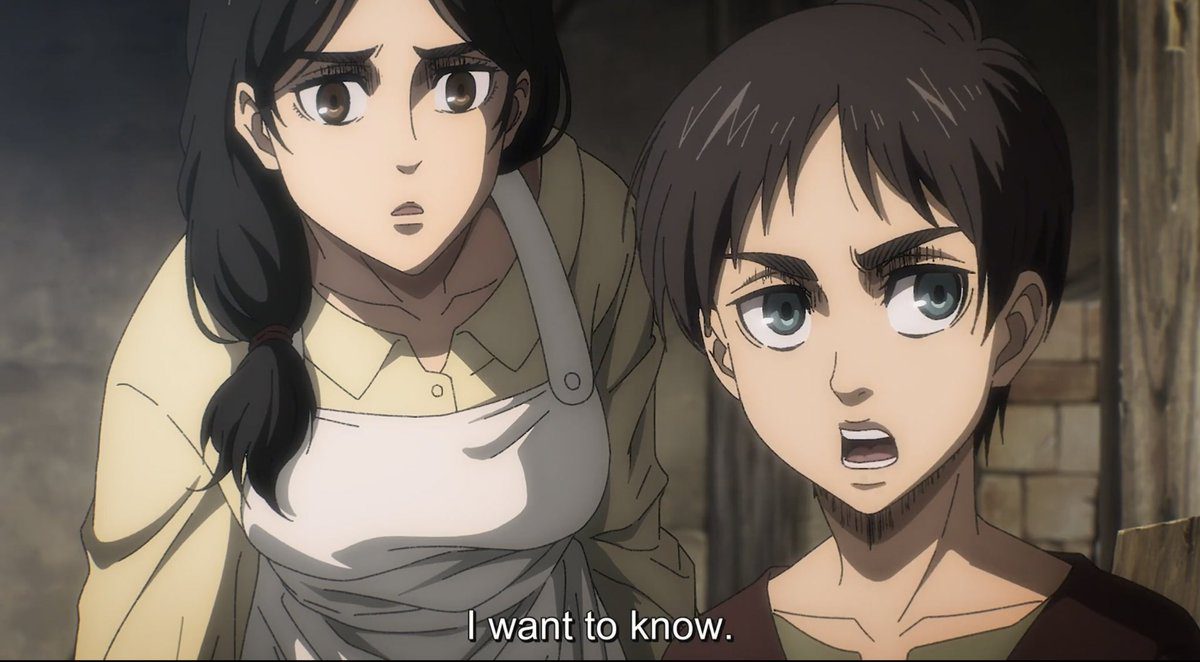 Eren’s temper was often short at best and murderous at worst, despite his lack of self-control. His uncontrollable rage would cause him to lose control, resulting in heinous violence. His lack of self-control got him into trouble, which worried both friends and family. Children frequently see the world through black-and-white lenses, feeling great compassion for humanity and its struggles while dismissing those who deny others their freedom as worthless scum who should be abandoned. He also tended to think from his heart rather than his head, even when his life was in danger.

It is revealed at the end of Attack on Titan that Eren first planned on being killed by his friends, and later on, he planned to lose the power of the titans. Mikasa was the one to kill Eren, and Mikasa killing Eren freed Yimir Fritz from the realm of titans, where she was a slave and had to make titans out of the sand. According to Mikasa, Yimir’s blind obedience to whatever King Fritz said, and her being bound to make titans out of sand in the titan realm were due to her love for him.

Mikasa’s killing of the man Yimir loved allowed Yimir to realize how to let go of love, allowing Yimir to be free and end the cycle of her making titans. After this message, it is implied that Yimir has passed into the afterlife. Since Ymir is no longer making titans, the Eldians are no longer titans and have become normal humans.

As a result of their saving the world from Eren’s wrath and their inability to turn into titans, Eren believed that the world would no longer hate them and that Eldians can live in peace. Eren even played a role in his mom’s death by manipulating Dina’s titan to move away from Bertolt after the fall of wall Maria, since Bertolt’s titan would be important in the final battle. After that battle, eighty percent of humanity has been wiped out and much of civilization has been destroyed. Mikasa bury Eren under a tree in Paradise three years after the battle, as she wanted to ensure that non-Eldians could not retaliate after the rumbling and there would be fewer people in the world who could threaten the Eldians. Three years later Eren’s body is buried under a tree in Paradise and Mikasa continues to live there. Meanwhile, Paradise views Eren as a hero and begins to build up militarily, hoping to protect itself from the rest of the world. At the same time Armin, Jean, Reinner, and some of the other former scouts and warriors (apart from Mikasa) become ambassadors for the rest of the world and try to make peace with Paradise.

During the story, Mikasa visits Eren’s grave with her husband and children, and eventually grandchildren. Meanwhile, the forest where Eren was buried gets transformed into a large city. Mikasa gets married to someone who is suggested to be Jean, though it is never explicitly stated if this is Jean. 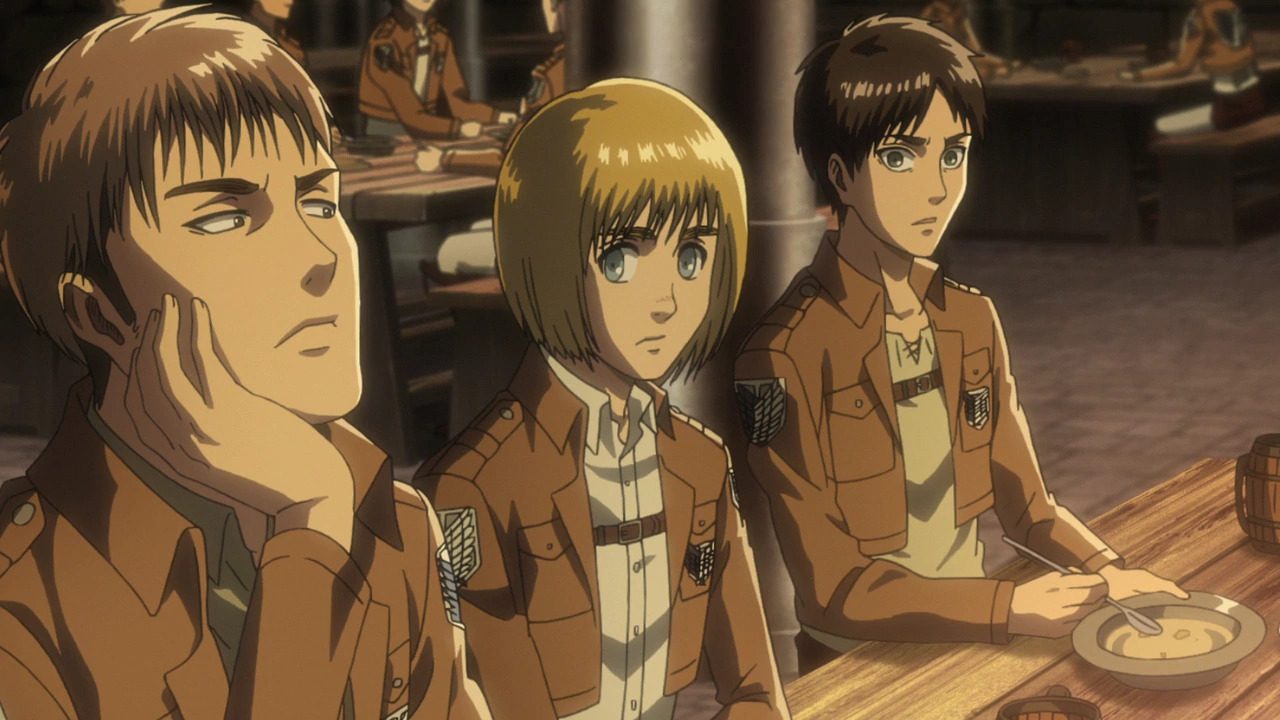 Jean, Armin, and Reiner from Attack on Titan

She is shown visiting Eren’s grave with her children and eventually grandchildren. Eventually, Mikasa dies and is buried in the forest with her red scarf. Later planes destroy the city that was built in the forest where Eren was buried. Some believe that this means Paradise has been destroyed, but we only see one city being destroyed so we don’t necessarily know its fate. After a few years, the fallen buildings of the city decay and the area becomes a forest again. A boy walking a dog that looks like a descendant of Jean and Mikasa approaches the tree where Eren is buried. 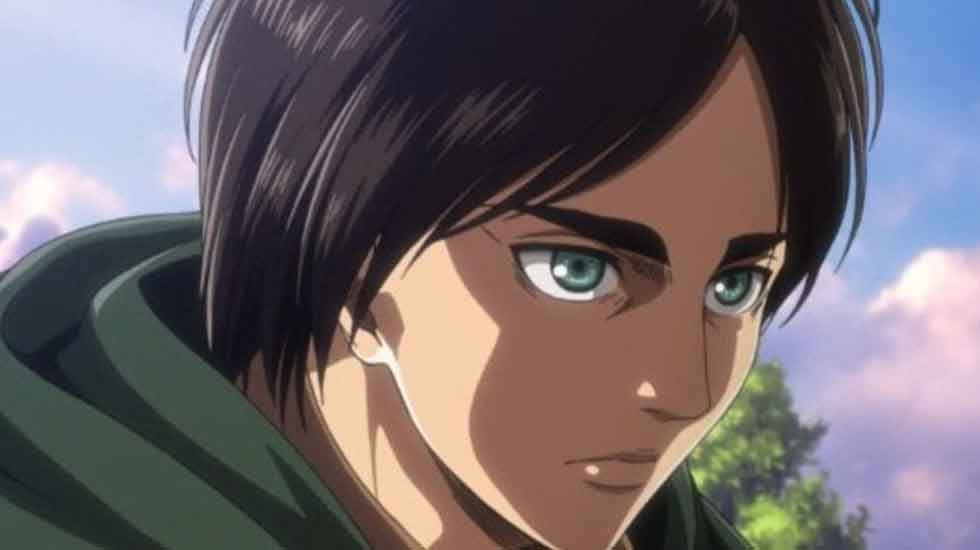 Eren Yeager from Attack on Titan

Now Eren did not want to die and he wanted to be back with Mikasa and everyone, but he was willing to lose his life for the sake of his friend. According to Eren, Mikasa’s killing of Eren was an important part of his plan. He was not supposed to do it, rather Mikasa was. All he did was to make sure she chose to kill him, ending Ymir’s existence and getting rid of the Titan race.

Where to Read Attack on Titan

Fans can read Attack on Titan on Various digital manga editions available on Comixology, Crunchyroll, INKR, Kindle, Mangamo, and Inkypen for Nintendo Switch. and also fans can buy Physical books of Attack on Titan they are available at Amazon, Barnes and Noble, and Books-A-Million.

Also Read: The Executioner and Her Way of Life Episode 10 Release Date: Manon is Akira’s Daughter?