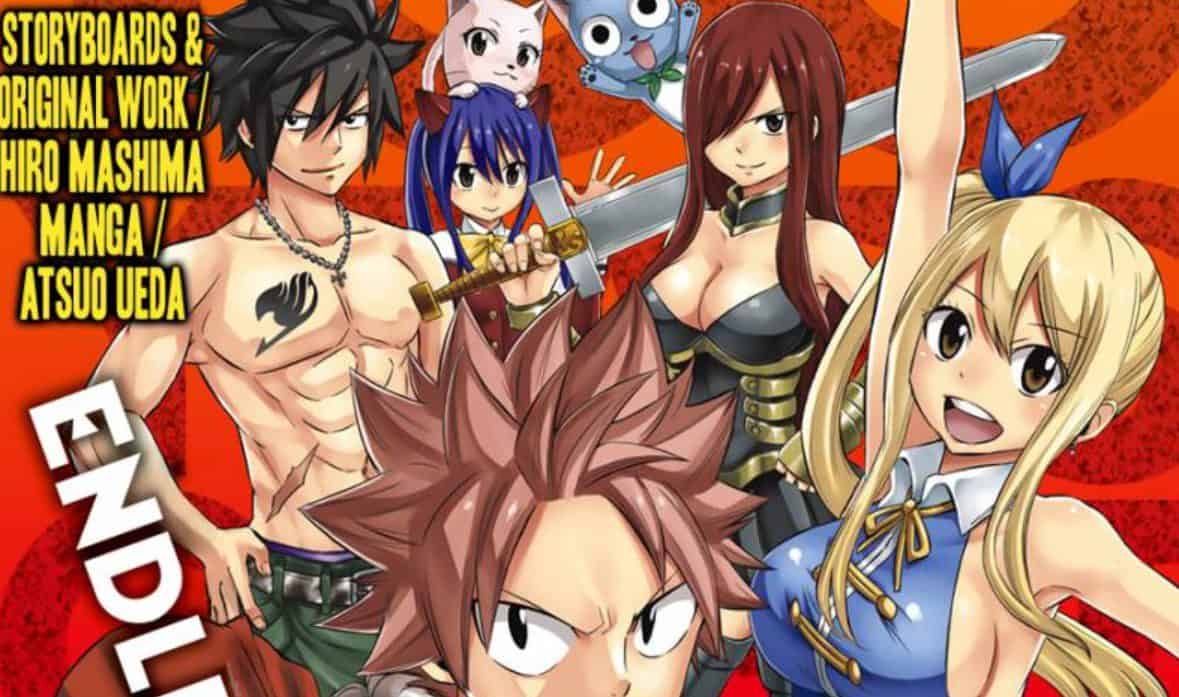 Each one of them has magical powers related to any one matter responsible for the existence of humans. Fairy Tail Guild has become stronger after dealing with Acnologia and Zeref. They will follow their journey until they get 100 years’ quest unreached by any mage. The Authors and Artists of this entertaining manga are Mashima Hiro & Ueda Atsuo.

It is a Shounen manga with themes including Action, Adventure, Magic, Fantasy, Loli, Monsters, etc. It follows the genre of Slice of Life with Romance.

We see Sabertooth Guild members at Lucy’s house, including Sting, Rogue, Yukino, and Minerva with Frosch. They inform that they went to the Fairy Tail Guild some days ago but in vain as there was no one to meet too. Minerva states they were told to wait and, in search of an Inn, ended up here by the landlady. Lucy remembers the magic of White Wizard, and everyone leaves to meet Natsu and the team. Upon reaching the guild, Erza welcomes them by calling them Devils.

The Oldman of the guild recalls and talks about the greatest library on the continent which is under the Sabertooth guild called ‘The Great Study Hall Of Saber’. Fairy Tale Guild proposes to conduct research there. Sting agrees on the thing with one condition the library is not open to the public. Every member of Fairy tale will compete with the member of Sabertooth in a game in which the content and rule will change after every win or loss. Natsu fills with energy with Erza is in doubt.

The 5-o-5 match starts. The first match happens between the animals Happy and Frosch. Frosch wins the game as voted more as cutest by the people of Magnolia. The second game is of shadow stepping against Rogue. Gray does not lose confidence that rogue is a mage of shadows and can control it. By escaping from Gray’s step as Rogue was about to step on the shadow Gray forms a big Frosch ice statue behind him covering his own shadow with his. By getting the opportunity Gray steps on Rogue’s match and wins. 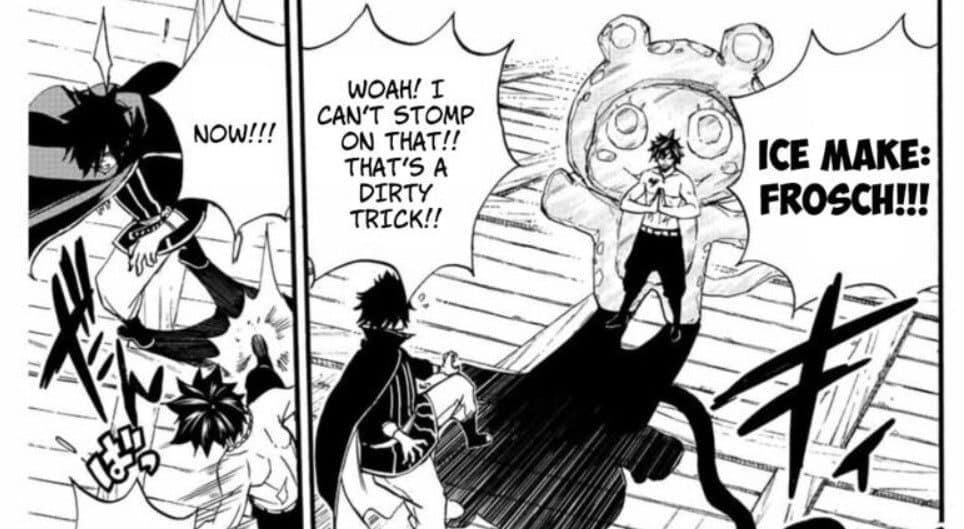 Gray is playing tricks with Rogue

The third game happens to be a quiz game between Lucy and Yukino. Every single question was related to Sabertooth. But still, Lucy gives every answer before Yukino can think of any. Lucy wins the game of Sabertooth, beating Sabertooth. Round 4 is of eating challenge between Minerva and Erza, which is won by Minerva calling it just as less. Now, the final and ultimate round between Natsu and Sting comes out as Arm Wrestling. Both start with full power, eventually trashing the guild in the dust.

As stated before, Natsu is superior to Sting in terms of raw strength. Ezra confronts Sting to take them to the library as the prize of winning. Sting put a condition before moving to which Erza reminds him of who’s the winner. Sting says it is a simple condition that he has to bring Jellal. The chapter ends with Erza in Doubt and shock.

What Is The Release Date For Fairy Tail 100 Year Quest Chapter 125?

Where Can One Read Fairy Tail 100 Year Quest Chapter 125?

One can read Fairy Tail 100-Year Quest on its official publisher’s site i.e Pocket Magazine. You have to get a subscription to read on the platform. Except, it has recent chapters 121,122,123 available to read free by signing up first. Besides the official publisher, one can read or buy the volumes and chapters from sources like Official Raw, Official English, Book Walker, Amazon, Ebook Japan, and CDJapan.

Also Read: The Classroom Of A Black Cat And A Witch Chapter 26: Release Date, Preview & Where To Read