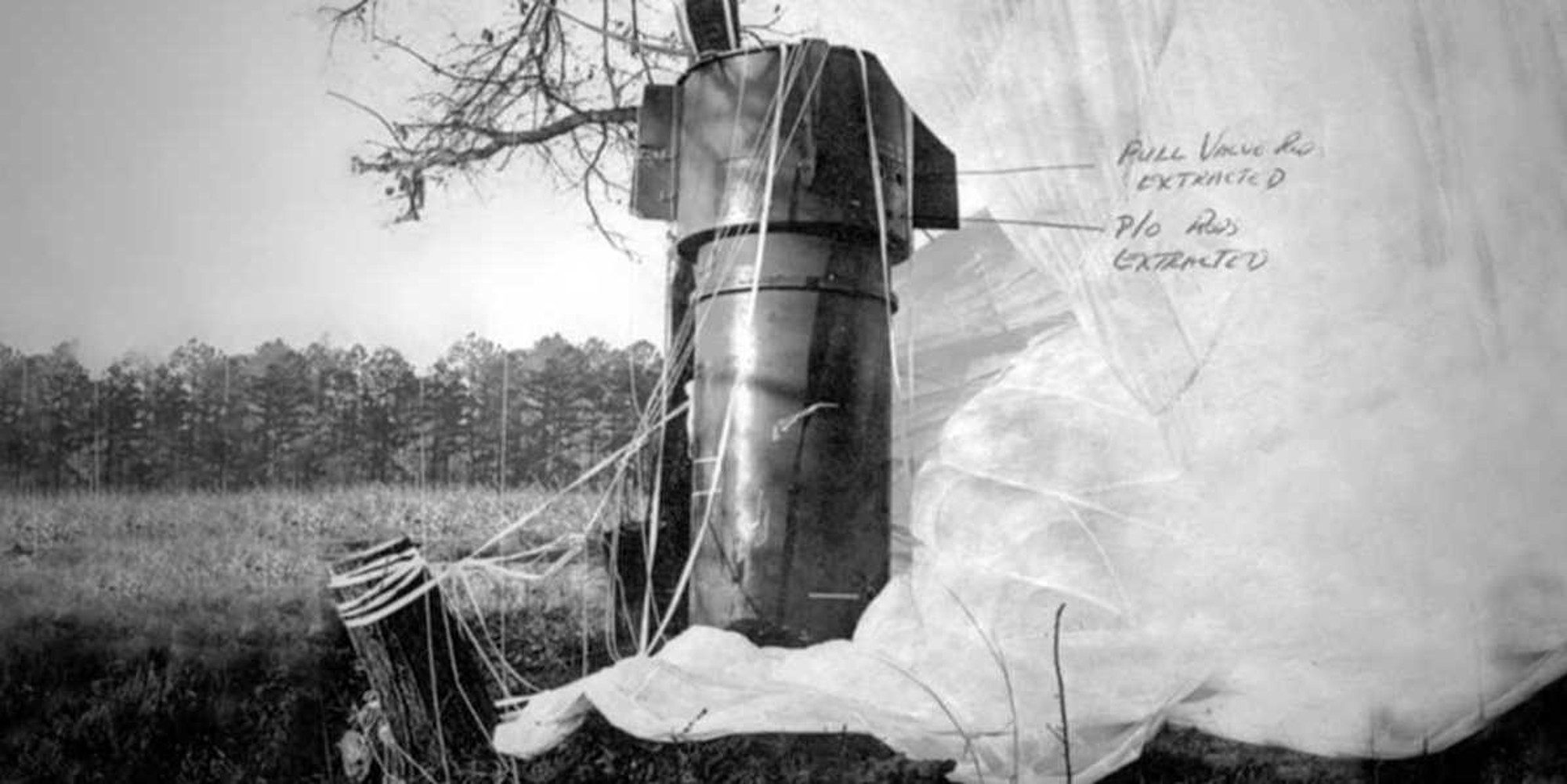 The Nuclear Bomb That Could Have Destroyed North Carolina

The Goldsboro B-52 disaster of 1961 occurred on January 23, close to Goldsboro city in North Carolina. Two huge Mark 39s that were 3 to 4-megaton weighing nuclear bombs were carried by a Boeing B-52 Stratofortress when it disintegrated while airborne, dropping the explosive. The crew was instructed to evacuate at 2,700 meters by the flight’s captain, Walter Scott Tulloch.

Two crew members perished in the accident, one ejected but failed to make the descent, and five crew members safely jumped out of the flight and made an emergency landing. Currently, a peculiar clump of trees stands in the center of an unremarkable field to commemorate the location of a single nuclear bomb’s detonation.

A gasoline leakage occurred during the flight, and the B-52 abruptly started to disintegrate mid-air. Centrifugal forces tugged on a rope in the cabin as the airplane was whirling and returning to earth, just as a crew member might if he intended to drop nuclear warheads over a hostile area.

A fire warning was transmitted as one of the guns proceeded through the entire arming process to explode and strike the ground. Some of the bomb’s fragments are believed to be buried roughly 200 feet below the surface since personnel failed to recover all of them.

The fine folks of Goldsboro were unaware that the regional Air Force station had been secretly chosen as one of many American airbases for Operation Chrome Dome, an apocalyptic scheme during the Cold War that maintained numerous B-52 bombers airborne around the Northern Hemisphere relentlessly, despite a noticeable rise in air activity in later 60s. There were two nuclear weapons on each aircraft.

Normally, bombers traveling out of Johnson AFB did perform a few practice laps right off the North Carolina shoreline, then traverse over the Atlantic en route to the Azores before turning around. It was necessary to replenish the B-52s, nicknamed by pilots as BUFFs, many times throughout each flight. The crew of Captain Walter Tulloch’s jet first became aware that it was depleting fuel quickly after undertaking one of these refueling procedures. Tulloch first disobeyed a directive from Air Control for an immediate retreat to Goldsboro to test the waters, but he quickly obeyed and started back. Tulloch completed the last turn at around 5,000 feet in height, arriving first from the south and roughly 24 kilometers from the Goldsboro base. The B-52 disintegrated at that point.

Even around North Carolina, according to Billy Reeves, that January night in 1961 was unusually warm. But soon before dusk, when a weird light started flooding through his glass, the temperature increased significantly. The sides of his bedroom started to glow red. A blazing B-52 bomber with one wing broken and hot debris shooting out from all angles suddenly dropped from the skies and plowed into a field less than a quarter mile away as the 17-year-old hurried outside to the front of his farmhouse. He dashed towards it, but it blew up.

Within about an hour, on January 24, in the wee hours, a combat chopper was circling overhead, and an augmented speaker kept shouting, “Evacuate!” The people of Goldsboro had no idea that twin 4-megaton hydrogen nukes were still within the misfortunate B-52’s debris, hidden away in the wintry pitch-blackness as “broken arrows” by the government.

What Would Happened If The Hydrogen Bombs Exploded?

Each one had greater potency than the total amount of destruction produced by all manmade explosions from the dawn of humanity until the conclusion of World War II. Considering how the winds blew during the explosion and the radioactive plume that followed, countless individuals may have perished. Raleigh, then Chapel Hill, and the neighboring cities would have been destroyed if it had struck Raleigh. In their search for explosive fragments, officials excavated 900 feet deep into the soil with a hole that was 400 feet wide until they came across a groundwater basin, which caused a murky muck. 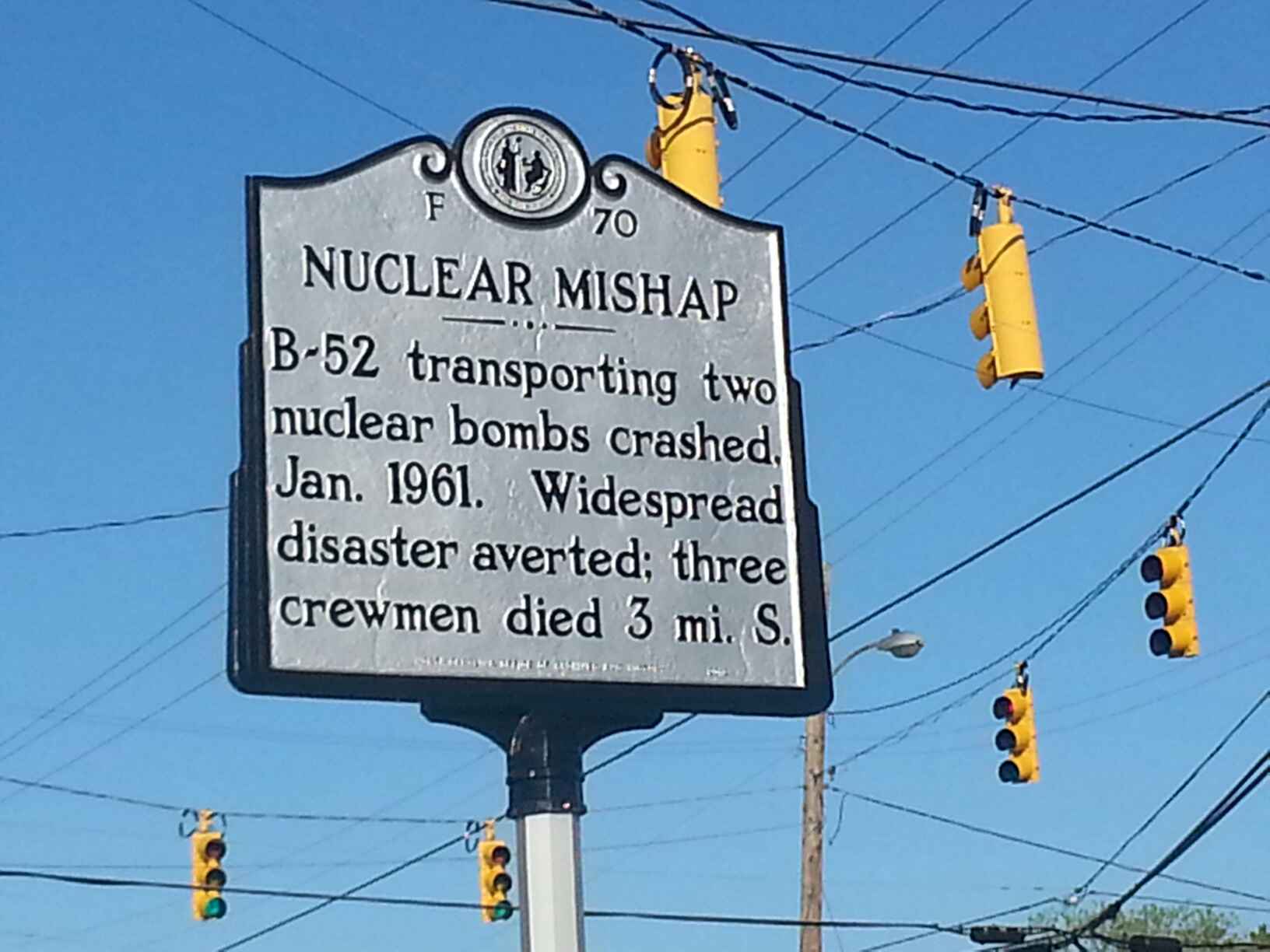 The plutonium core is still underground. One switch separated each weapon from detonating a North Carolina nuclear catastrophe. The region would have a much-increased long-term incidence of cancer. The locals believe their prayers saved them from the disaster. Three miles distant from the location of the Goldsboro “Nuclear Mishap,” near Eureka, North Carolina, a historical sign plaque is still visible today. All that remains of the tragic evening, which occurred precisely 61 years prior, is a modest clump of woods and a few discolored piles of earth in a field.

Also Read: The Solway Firth Spaceman: Jim Templeton And The Photo Of The Astronaut Overhead