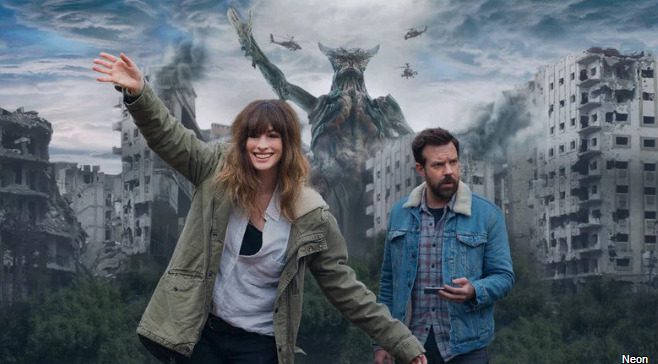 Here’s the Colossal ending explained. While there are a lot of movies released left and right, only some movies are able to leave their mark with their unique plot. Seems like science fiction is one genre that just keeps on giving and is very trending. People want to watch science fiction movies because of their Mind Bending plots and the ability to make you think. The plot of these movies seems simple but is, in fact, very complex. Colossal is one such movie that was released in 2006. The movie is directed by Nacho Vigalondo. The movie is a great exploration of mental health and the demons within.

The movie follows a struggling and unemployed writer Gloria who also suffers from addiction and alcoholism. She lives in her New York apartment with her boyfriend, Tim. She is forcefully kicked out by her boyfriend, who is frustrated with her girlfriend’s addiction. Gloria then surprisingly discovers that she has the ability to discover a life-sized monster in Seoul. The monster is a replica of Gloria and does whatever she does in the US. The discovery shatters Gloria as she realizes the destruction it has left in its wake.

Things start to go awry when Gloria discovers that her monster is not the only one existing in Seoul. When she meets her friend Oscar and gets hooked up in a bar as a bartender. She realizes that Oscar also has a monster replica creating havoc in Seoul. If your mind couldn’t comprehend the ending, we don’t blame you. We are here to aid you in this Colossal ending explained article.

Gloria soon realizes that the monster is a way by which Oscar can control Gloria. In a final showdown, the monster of Gloria flings over the monster of Oscar in the Seoul playground. Since the Oscar monster disappears, it is assumed that he is gone for good. We can expect Gloria wins in this battle of monsters.

What do the monsters represent in the Colossal movie?

While this was very on the surface, the Colossal ending explained. This is the type of movie where there is more than what meets the eye. The monster Gloria summons initially is uncontrollable to her because the monster is a metaphor for the mess that is her life. Gloria is fighting off her own demons in the form of addiction, and the monster represents just that. When she realizes the extent of her self-harm, she starts to control the monster well. In the final showdown, when Gloria fights off the Oscar monster, she wins over her own demons in a way.

The cast of Colossal movie

Apart from a fantastic plot, the cast of the movie was phenomenal. The movie works so well because of the amazing cast who was able to pull off such a unique plot. The titular character Gloria is played by the actress Anne Hathaway. The actress needs no introduction of her own. She is one of the pioneering ladies in Hollywood. Other actors include Jason Sudeikis, Nathan Ellison, Dan Stevens as Tim, Austin Stowell, and Tim Blake Nelson.

That was it on Colossal ending explained.