Following a royal road to a magical fantasy, the Witch Hat Atelier manga has been selected for an anime adaptation. The manga is one of the most excellent works of fantasy to have ever been created, with unique magic depiction and outstanding character development. Given its popularity among manga readers, it is quite evident why the upcoming Witch Hat Atelier anime adaptation is such sensational news. For those who are unaware, Witch Hat Atelier is a fantasy manga that was nominated for the Kodansha Manga Award twice and has won three French Awards.

The manga is written and illustrated by mangaka Kamome Shirahama and was launched by Kodansha in 2016. It was then translated to English and published by Kodansha USA and is currently available on the website for reading. The manga has been serialized in the Monthly Morning Two since its launch and has produced 9 volumes to date. Witch Hat Atelier is currently ongoing and has shown very promising progress in terms of both sales and story.

This is, however, not the first brilliant work of Kamome Shirahama. The mangaka of Witch Hat Atelier has drawn several covers of American comics such as “Marvel Comics,” “DC Comics,” and “Star Wars” as a freelance illustrator and manga artist. In his active years, he also wrote Enidevi, a 3-volume manga published by Kadokawa. His most recent work has reached a new milestone, being selected to be animated. Here is all that we know about the Witch Hat Atelier anime adaptation and a brief introduction to what to expect from it.

Also Read: Yu-Gi-Oh! New Spin-off Manga Announced: What is it About?

Magic flows through the world where the story of Witch Hat Atelier is set in. Humans who live in it are called Witches, irrespective of their gender. Magic in this world is drawn rather than being cast with the use of a specific ink. The ink can be used to draw various patterns, each symbolizing different spells and hence giving out different magical effects. But magic needs to be used with great precision and accuracy, for even a slight mistake can bring harm. 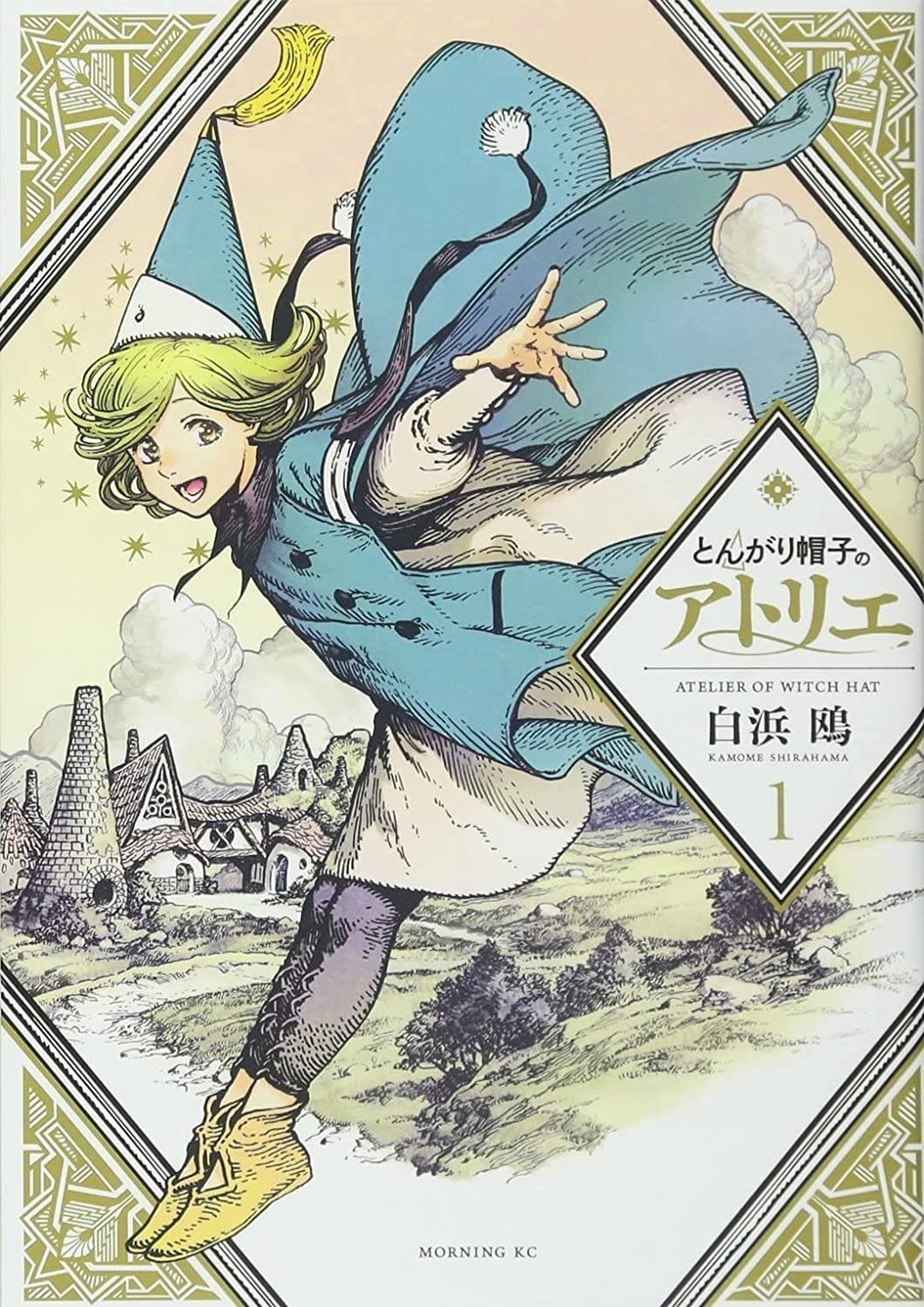 Coco, a girl from a small village, wants nothing more than to be a witch. But if one is unable to use magic from birth, it is said that one cannot ever become a witch. Coco is just about to give up on her dreams of becoming a witch until she sees Qifrey, a witch using magic. Things change further for Coco when she realizes that the picture book she had has been a magic book all this time. Curious, Coco tries to use different spells. But accidentally, she ends up using a forbidden spell which turns her mother into a crystal.

Desperate to save her mother, Coco seeks the Tower of Tomes, the only place where she can find the spell to undo the forbidden magic she cast on her mother.

Now a part of Qifrey’s Atelier, Coco takes her readers on the most exciting and magical adventure ever. 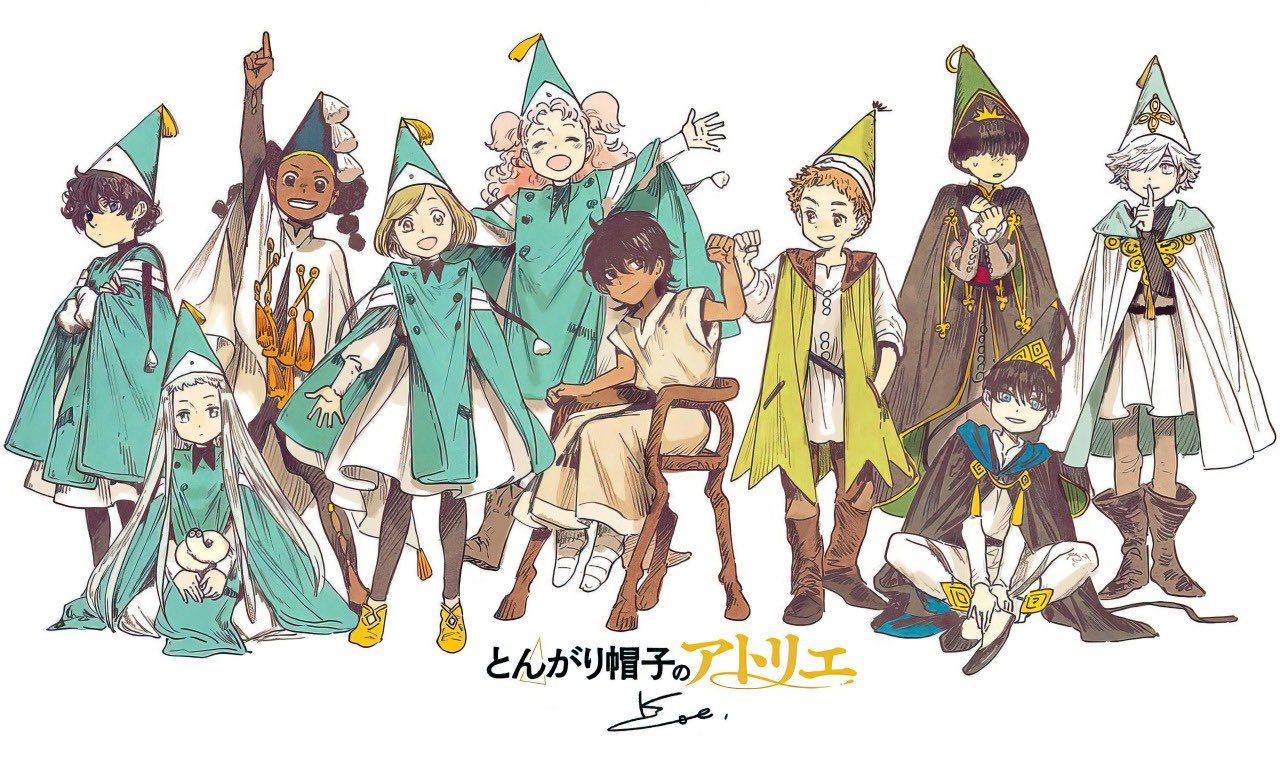 On 5 April 2022, the official Twitter page of Witch Hat Atelier made public that an anime adaptation is under production. The news was first announced in Kodansha’s Monthly Morning Two magazine. In commemoration of the announcement, the first PV of Witch Hat Atelier was released.

So far, there has been no announcement regarding its release date, studio, cast, or staff. However, we expect more information on the anime to be released soon as the release date nears.

The main characters of the Witch Hat Atelier manga belong to Qifrey’s Atelier, a workshop of a kind that comprises witches who are all apprentices of Qifrey. 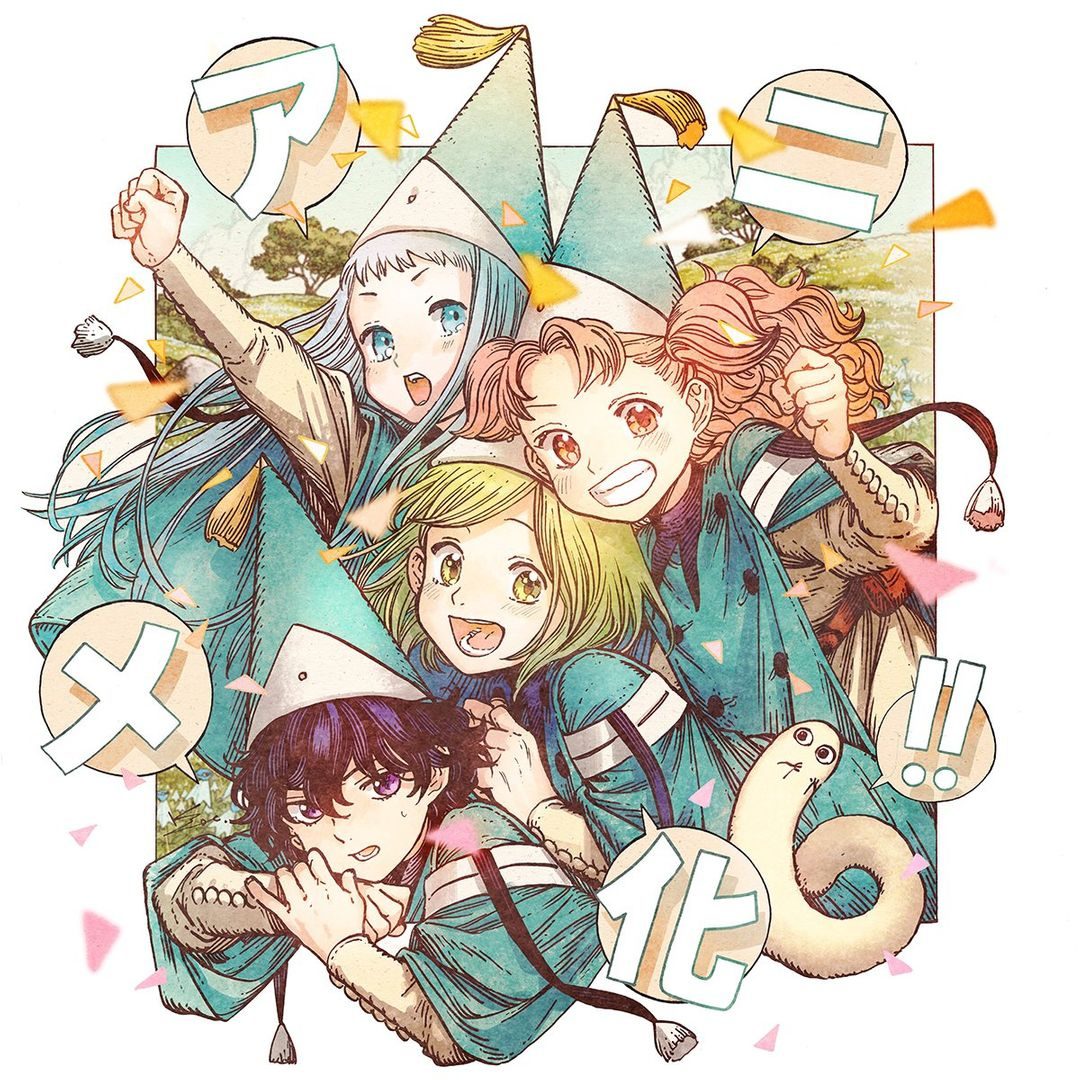 Coco is the protagonist of the story. She is the 12-year-old daughter of a dressmaker who was born without any ability to cast magic. On discovering that the picture book was a magic book, she accidentally casts a forbidden spell that turns her mother into a crystal. She is deeply inspired by Qifrey, a skilled witch, and later becomes his apprentice.

After turning her mother into a crystal, Coco dedicates her time to searching for the Tower of Tomes. The Tower of Tomes is a special location where all magic books or magic-related books are reproduced instantaneously the moment they are written. Thus, Coco hopes to find a spell that can break the forbidden curse.

Personality-wise, Coco is a very positive person and is deeply enthusiastic about using magic. Having been born without magic, she is new to all sorts of magical things but with time, she grows. Initially, she only uses simple magic and illustrates it using simplified shapes. However, she infuses this simplicity with smart tactics that make simple spells very powerful. As the story progresses, she grows stronger.

Qifrey is the deuteragonist of the Witch Hat Atelier manga and anime. He is a young man of unknown age and the leader of his Atelier. He is also the teacher of four other witches. Qifrey is introduced as a very skilled witch with a very handsome face. He excels at using magic with water attributes especially. His extravagant water attribute magic skills developed due to his hate for water as he worked more on trying to control water to escape it.

As a teacher, he is gentle and patient with his students and does not give up on them. He pays attention to their queries and observes their skills. This makes it easier for him to identify their weakness, strengths, and style of magic usage. He also shows a deep attachment towards his students as he feels obligated to protect them from all harm. 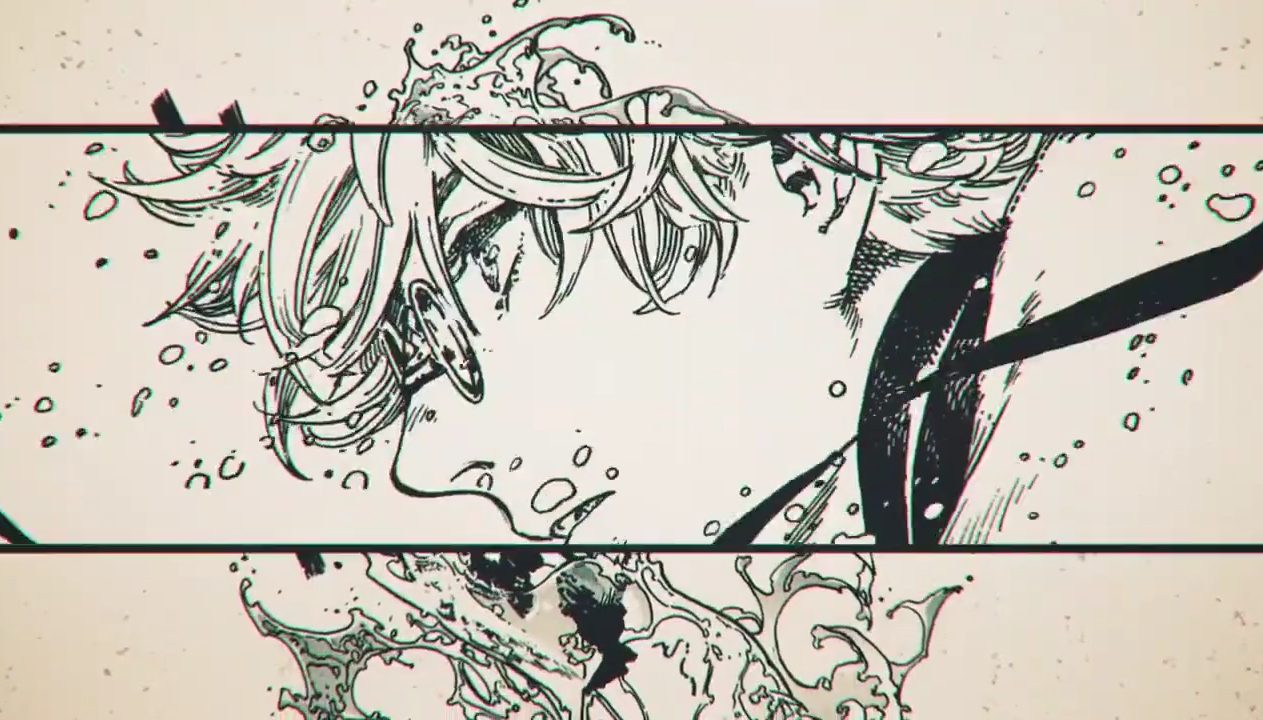 Despite his positive side, Qifrey has a darker side to him which is filled with resentment towards the Brimmed Hats for primarily unrevealed reasons. He is always in search of the Brimmed Hats, a powerful group that makes use of forbidden magic. In fact, he takes in Coco as an apprentice solely because he believes that she can lead him to the Brimmed Hats. However, his hidden motives have never forged any negative emotions towards Coco as he continues to train and treat her like other witch apprentices.

Agott is a major supporting character from the Witch Hat Atelier anime and manga. She is 12 years old and of noble birth. She was born as a daughter to the Arkrome house– a family of renowned librarians of the Tower of Tomes. Agott approached Qifrey to sharpen her skills as a witch so that she can prove her worth as a member of the Arkrome family. She then became his apprentice and a part of Qifrey’s Atelier. Belonging to the noble class, she held a certain amount of pride and initially looked down upon Coco, who had no magic. However, her superiority complex came from her own low self-confidence.

Despite this, Agott has proven to be extremely hard-working. In fact, she might even be the most hardworking witch among Qifrey’s Atelier. She studies with dedication for all tests and makes a lot of effort to actually improve. Even with all her pride, she refuses to settle for her performances and always seeks to do better. Her motives are pretty clear in her actions. As the story progresses, she becomes more open-minded and shows a lot of improvement in her skills.

Olruggio is Qifrey’s childhood friend and also the Watchful Eye of his Atelier. The Watchful Eye has special authority to look over ateliers and ensure that there is no usage of forbidden magic in them. He is yet another skillful witch who specializes in fire magic. However, despite being a fire attribute user, Olruggio has proven to be extremely reliable when it comes to creating magic items. At Qifrey’s Atelier, he looks over all the young witches and cares about them deeply, not only regarding their training but also in their daily activities. He helps them get enough sleep by providing them with special magic tools and teaches them tricks and hacks to using magic.

Olruggio comes off as rather cold initially with a straight face. He does not like to twist his words and is honest about his opinion. However, Olruggio means no harm and is actually a very kind-hearted person. He believes in treating everyone equally and often doubts the ideals of society. Olruggio has very often shown his disapproval of certain norms and laws among witches.

At the same time, Olruggio is a tsundere and shows disregard towards compliments of all sorts.