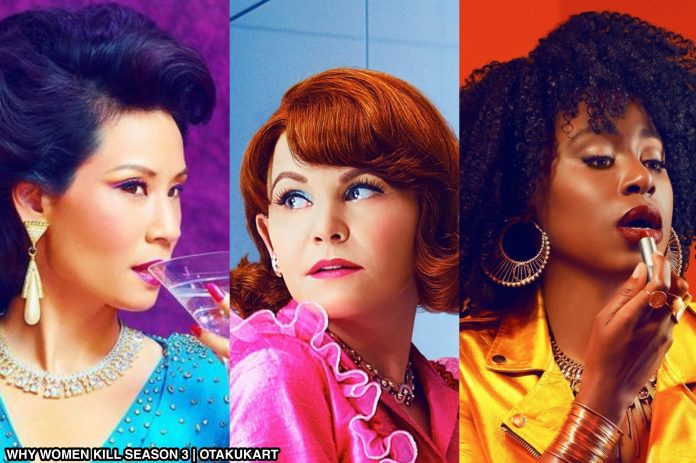 This dark-comedy drama became one of the most popular shows! The most interesting part about this series would be its phenomenal approach to casting women as the lead characters of the story. Fans found this show to be amazing and many fans were obsessed with the main narration of the story. Well, the main reason behind all the enthusiasm for this series would be Ginnifer Goodwin’s acting skills. Every scene will bring in a new plot twist for you to enjoy and guess what? Recently, fans have been speculating different details to know more about season 3 of Why Women Kill.

This time everybody is sure that the creators of this show will come up with more interesting details. However, the concept of the plot makes it very complicated but still, the makers made sure that you will be entertained with the presence of comedy in this show. It’s good to see Women stand up to protect themselves from the pain of infidelity. Season 3 of Why Women Kill will give us more information on how women can turn everything upside down, once they’re hurt. Moreover, the series highlights the same context, as the whole dynamics of these women change for once and all.

When it comes to the main storyline of this show, the thing that attracts more attention would be the way it portrays the life of three different women from distinctive timelines. This show helps us understand that women will handle anything but they won’t accept cheating. Fans were excited about the way, the whole narration described the efforts of these women to step out of their partner’s infidelity problem. Moreover, every woman in this series is phenomenal when it comes to being an ideal wife.

But their partner’s infidelity changes everything for them. The first episode begins with Beth Ann’s story which is set in the year 1963. At first, things are going well as the couple decides to change the whole course of their life after their daughter passed away. But soon, rumors began to swirl around her husband – Rob’s life. Moreover, she dismisses all the claims. But one day, she catches her husband with a waitress. Beth is devastated and she couldn’t believe that Rob would do something to hurt her. Things take a different turn, as Beth decides to make amends with the Waitress April.

But guess what? The story gives another surprise, wherein Beth generates a malicious plan in her mind. And over time she creates a strong friendship with April. Since April is young and naive, she doesn’t understand her true motives and befriends her. On the other hand, the show also takes us on Simone’s journey with her husband Karl. Simone believes that she’s living her dream life until she learns about her husband’s sexuality. It seems he was homosexual for a very long time. Moreover, the third story depicts the life of Taylor and Eli and their marriage is pretty different. They allow each other have their partners.

Well, if you look carefully, season 2 of Why Women Kill is pretty different and has a distinctive storyline too. Even though the main genre is about infidelity, this series will give you more insight into the changing personalities of men and women. But guess what? There’s a different kick to this season! Moreover, the second season premiered in October 2019. Followed by the success of season 1, the creators had to opt for more seasons. Speaking of the second season, the first episode begins with the glamorous life of Alma Fillcot.

At first, things were beautiful for her, and it equally worked for her personal as well as professional life. On the other hand, the problem arises when Alma gets to know about her husband’s dark secret. According to the storyline, he is a beloved veterinarian, but little did she know, that Bertram has a different way of his living his life too. Alma also realizes that Bertram likes to maintain his collection of different accessories. And these accessories included items like a brooch and hairbrush. Well, in the beginning, she doesn’t understand a thing about this weird obsession.

Also Read: Sonic 3 Movie: When Will It Come Out?

But soon everything becomes clearer and clearer. Well, the series gives a lot of scary experiences, wherein we understand that Bertram had vague intentions about Maisie. He decides to visit her with a bouquet and together they have wine. But as time passes by, Maisie is getting dizzy with each minute. And soon viewers are sure that, Bertram added something to her wine causing her to fall asleep. But guess what? Bertram decides to end her life. And he just wanted to relieve her of her problems. What will Alma do to stop this?

When it comes to the role of Alma is portrayed by Allison Tolman. And the transitions in a housewife’s daily life were amazing to watch. The ending of season 2 garnered massive attention towards the increasing popularity of this show’s theme. Well, speaking of the finale it is pretty complicated but in the end, everybody knew what the outcome was going to be. Moreover, Alma becomes more and more curious about her husband’s behavior. And this plays a very important role in the proceedings and development of this series.

Moreover, these dynamics brought in a lot of changes in general. And these changes were specifically based on Alma and Bertram’s married life. Nobody accepted this change from Alma since, towards the end, she became an entirely different person. Well, Alma becomes a full-fledged murderer by the end. It becomes pretty evident that Alma was not at all happy with her current life. She wanted more from it. Well, many people still believe that Alma’s husband played a very important role in her life. However, she just wanted people to notice her. But still, this doesn’t sum up her need to become just like her husband!

Even though she committed heinous crimes, guess what? Alma was never ashamed of it. She just wanted to acquire her dreams. From the very first day, Alma’s enemy was Rita. And she knew that Rita loved to stereotype everyone. Moreover, Alma’s destructive mind came up with numerous plans to infiltrate Rita’s life. And it began with her murder. Little did you know, that Alma became an antagonist as the show ended. But still, viewers loved her character a lot. Towards the finale, Alma was caught for her crimes, and guess what? Now nobody is going to be towards her.

The release date of Why Women Kill Season 3 became a very popular topic on the internet. Moreover, the previous seasons came in with a huge bang. And this time fans expect more from the franchise. Since there were around 20 episodes in total and each episode had its emphasis on the viewers of Why Women Kill. Moreover, there are huge chances that this season will bring in a very distinctive storyline and that’s the main reason behind all the enthusiasm for the context of this series. Well, the creators of Why Women Kill announced their contentment wherein they revealed this news on December 15, 2021.

Moreover, there are several speculations wherein fans believe that this show will be officially released on July 28, 2022. And guess what? This series is created under Paramount Plus. The whole show highlights the main point that women in this series had a reason to change the whole course of their behavior. And guess what? Every woman in this show turned extremely malevolent when they were treated badly by their lovers or husbands. Usually, there are several programs, wherein a woman is often portrayed as a weak human being. The character of a man plays a very important role in their life.

But that’s not the case with this show, the creators made sure that none of these stereotypical topics are present. Well, there are several predictions, wherein it is believed that the show will last for two months. Little did you know, that this show is an amalgamation of different genres and topics. And these topics are often sensitive to bring out to the public. As of now, all the dark-comedy fans are desperately waiting for the arrival of this one. Nevertheless, the upcoming season might bring in more and more fan following!