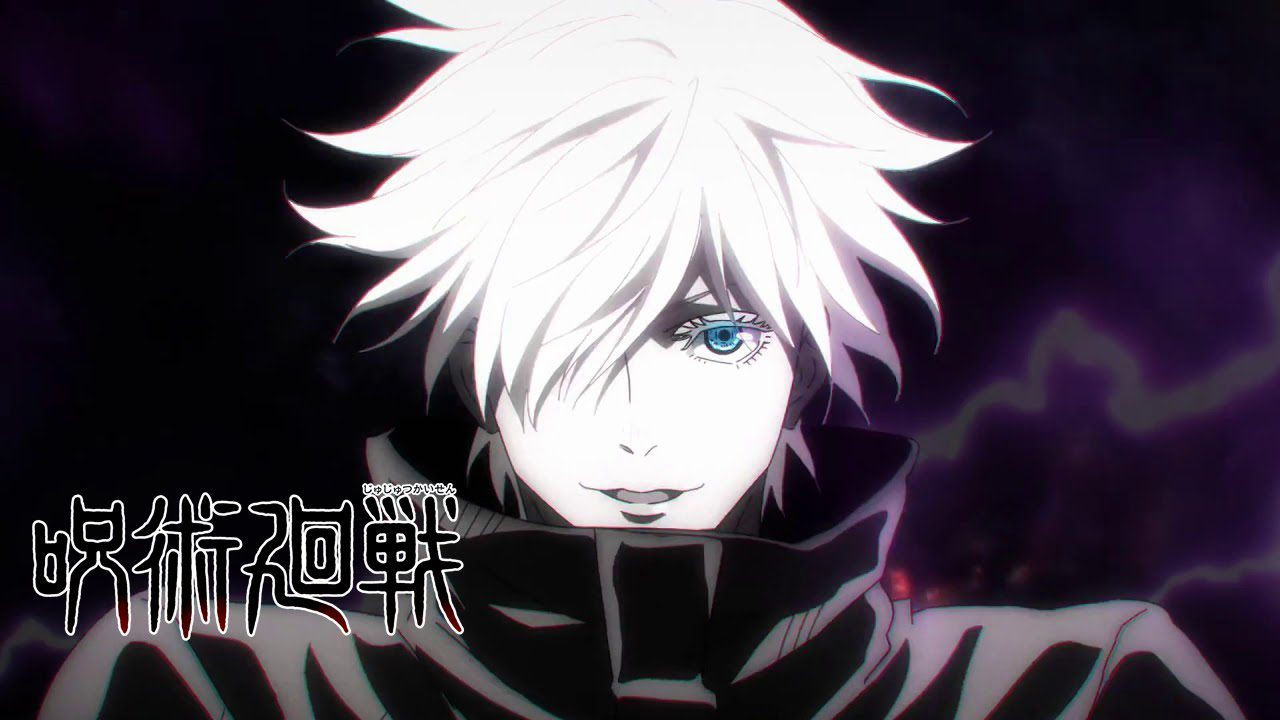 There’s no doubt that Satoru Gojo himself is one of the aspects that makes Jujutsu Kaisen so special. He is basically the walking resemblance of power and unpredictability, thus becoming the sole symbol of fear even in the hearts of special grade curses. Be it a curse or a sorcerer, there isn’t anyone who can defeat him in a fair fight. It was only after the introduction of the Prison Realm that we realized that the six eyes bearer could be defeated too. He couldn’t help letting his guard down when his dead best friend showed up before him after years.

Coming to his personality, he never gets tired of his self-centered talks and is often seen as a nonchalant and playful character. However, don’t get deceived just by his lack of seriousness. We, the manga readers, know that his early life was far from a happy one. Naturally, the heavy emotions often seep into his words, thereby giving them a deeper meaning. Here’s the list of 10 Satoru Gojo quotes that make him one of the best anime senseis of recent times. The list will be a mixture of narcissistic and deep quotes, reflecting his nature perfectly.

1. It’s ironic, isn’t it? When granted everything, you can’t do anything.

Satoru Gojo never misses a chance of breaking his opponents’ spirit before rag dolling them in a fight. He goes the extra mile just to ensure that his opponents realize how inferior they are to him. Call it confidence or arrogance; that’s what makes his fights more like a one-sided rampage. Before beheading Jogo with his bare hands, he reminded him how it feels to be useless despite having power. Jogo’s situation must have been relatable for Gojo. There were instances where Gojo had failed his friends even with the power of his six eyes. However, Gojo couldn’t help rejoicing to see Jogo in a similar position. 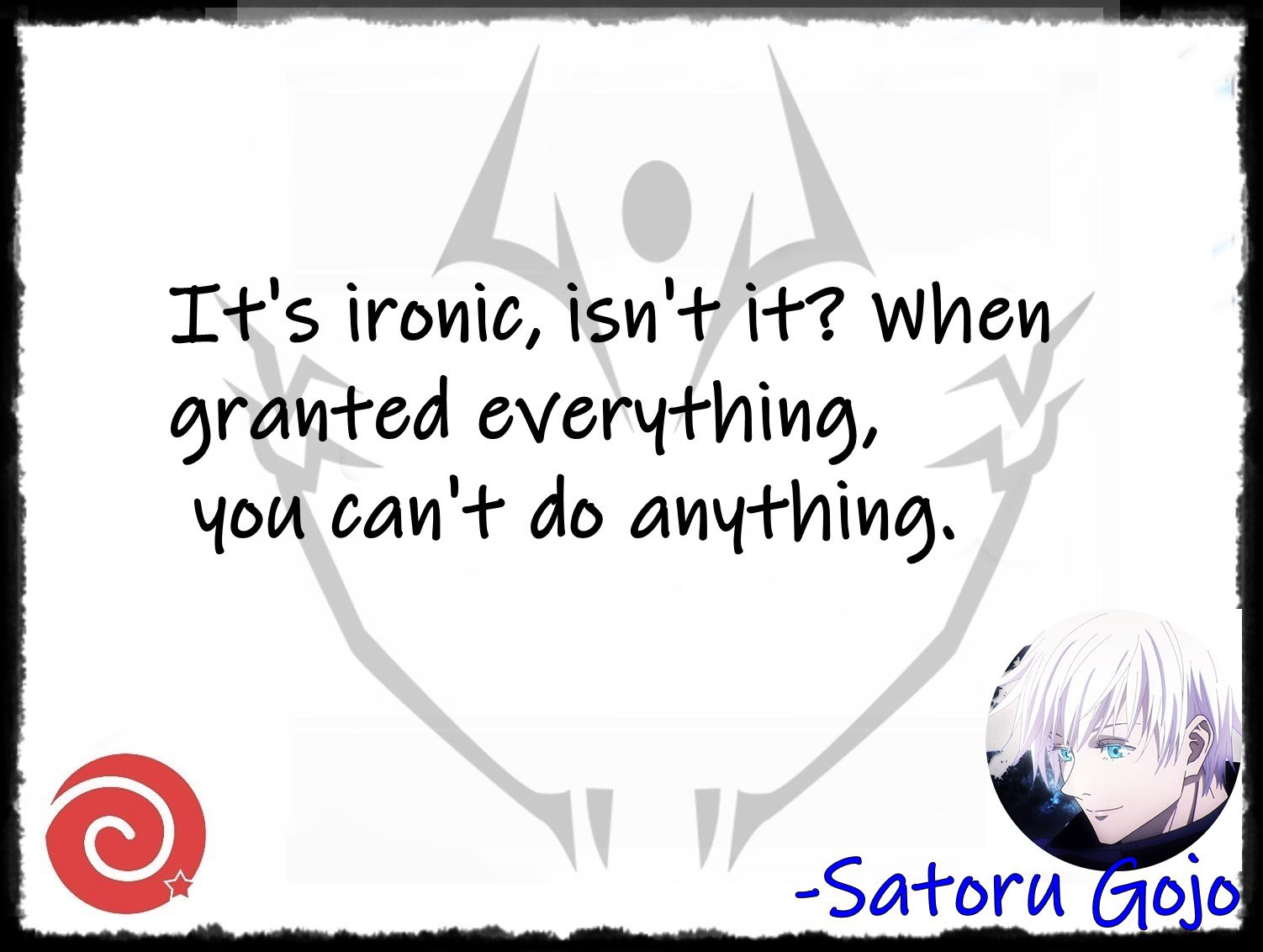 Yes, that’s the confidence he had in himself, even when the King of Curses was right in front of him. When Itadori was concerned that switching to Sukuna could be a bad idea, he assured him by claiming himself to be the strongest. He proved that he wasn’t at all joking in the next ten seconds when he played around with Sukana. Sukuna couldn’t lay a finger on Gojo even after his best attempts. The fight was over before we realized and Itadori switched back to his senses. 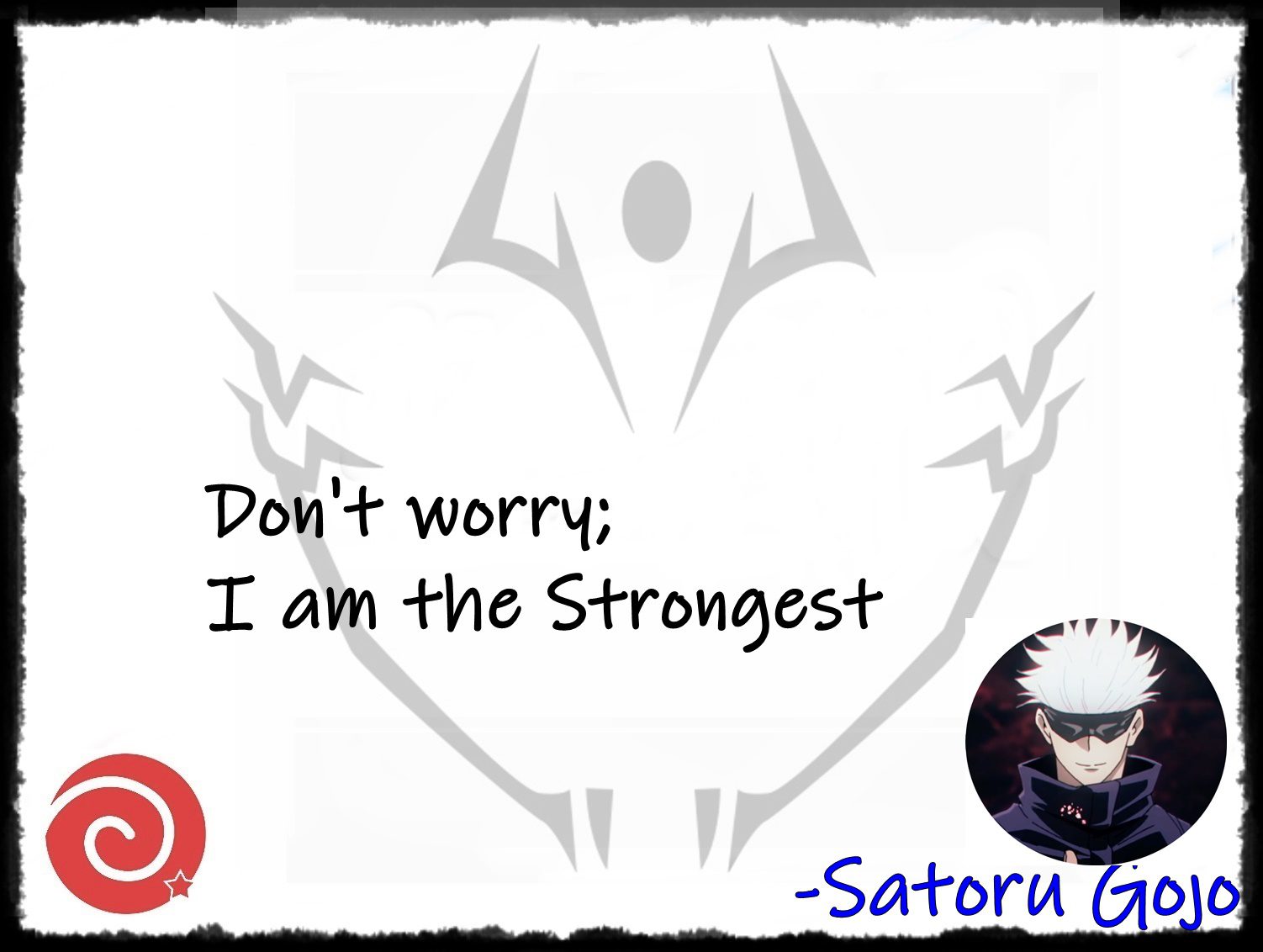 3. “I’ve always been a nice guy who cares for his students.”

It’s no secret that Gojo sensei has always protected his students like an unshakable canopy. He didn’t think twice before breaking into the anti-Gojo barrier when his students were fighting Hanami alone. The Jujutsu High higher-ups didn’t have the guts to lay a finger on Itadori and Yuta, knowing that they were Gojo’s students. He knew that he would be targeted sooner or later, so he asked Yuta to take care of Itadori if anything happens to him. 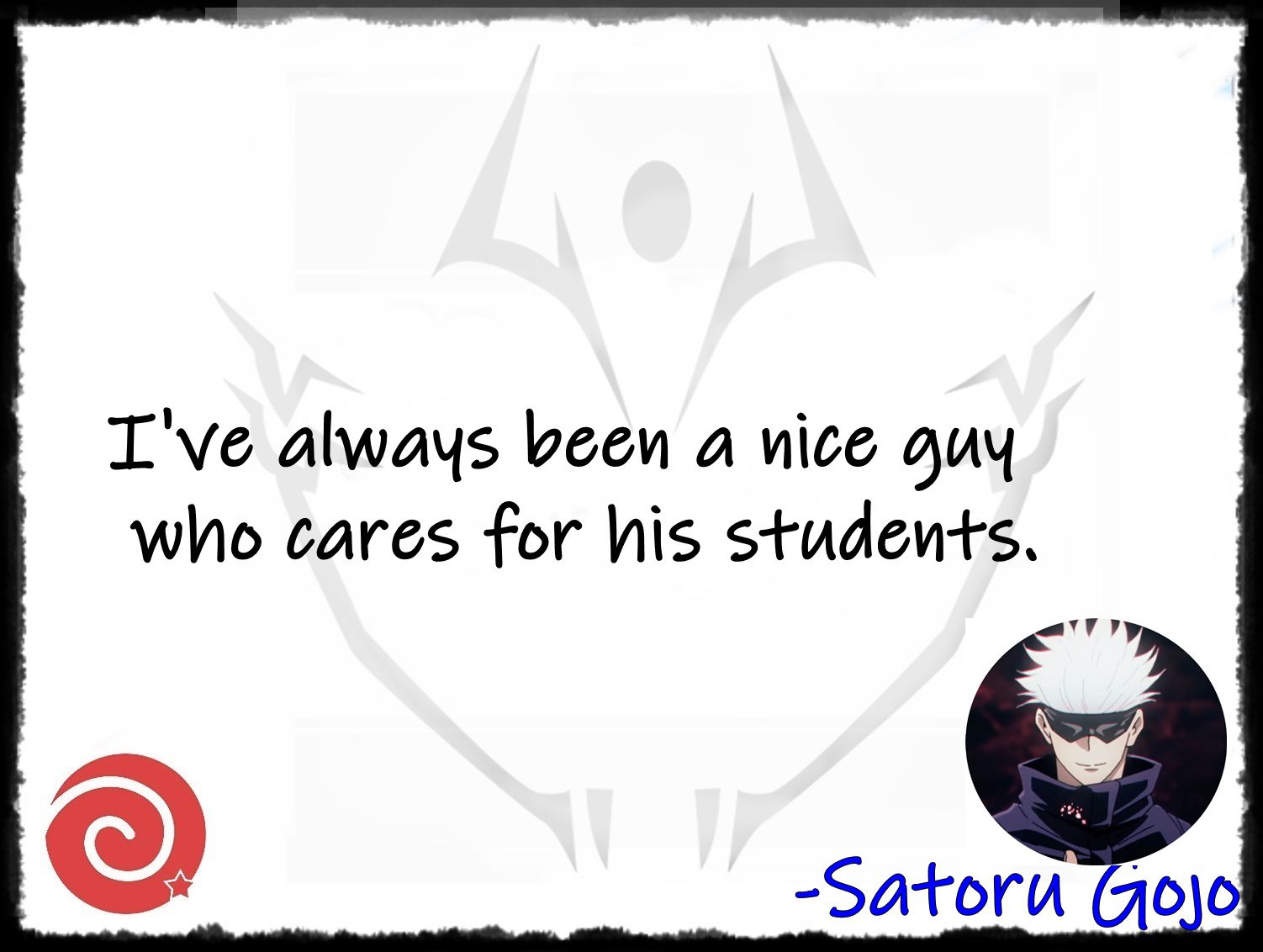 4. “No matter How many allies you have around you, when you die, you will be alone.”

Megumi has this bad habit of focusing more on teamwork over individual strength. He is undoubtedly a great leader, but is he a good jujutsu sorcerer as well? Not so much. Gojo reminded him that jujutsu sorcery is an individual sport. When someone dies on the battlefield, they die alone. There won’t be anyone else following him to the grave. 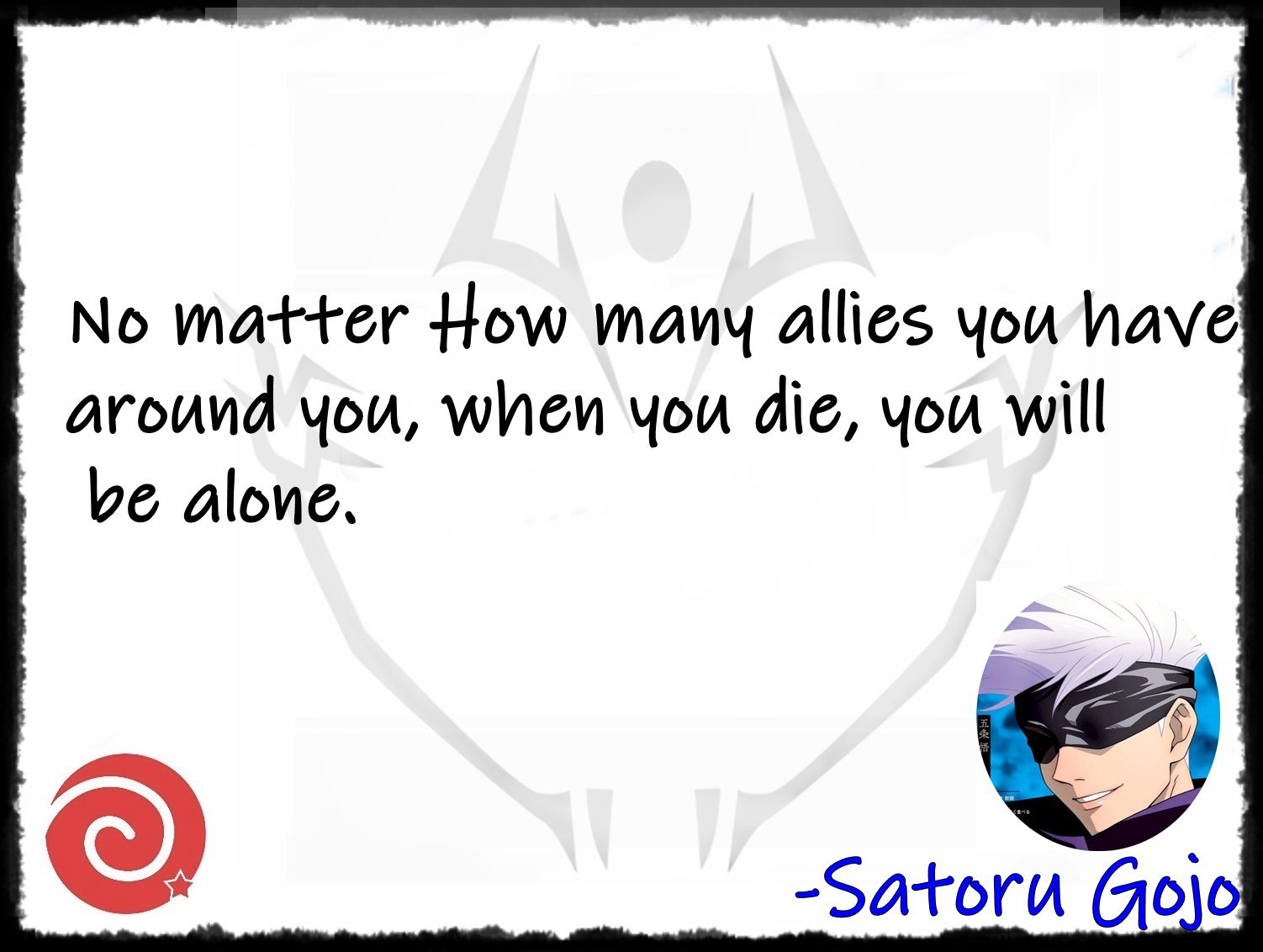 This was Gojo’s way of encouraging Megumi to grow stronger for his selfish reasons. He doesn’t want Megumi to rely on Itadori and Nobara for the combat. Thanks to these words, Megumi explored the evil within him and went on to unleash the Chimera Shadow Garden domain expansion.

Also Read: Strongest Domain Expansions We Have Seen In Jujutsu Kaisen So Far: Ranked in 2021

5. “Dying to win, and risking death to win… are completely different, Megumi.”

We are already halfway in the top 10 Satoru Gojo quotes, and here’s the one that inspired me the most. Gojo was disappointed at the way Megumi threw off his strike in the baseball game. He did this so that Nobara could approach her bases. However, Gojo saw this as Megumi’s inability to rely on his own strengths. As I said before, unlike baseball, jujutsu sorcery isn’t a team sport. Here, personal strength is enough to turn the course of a battle. 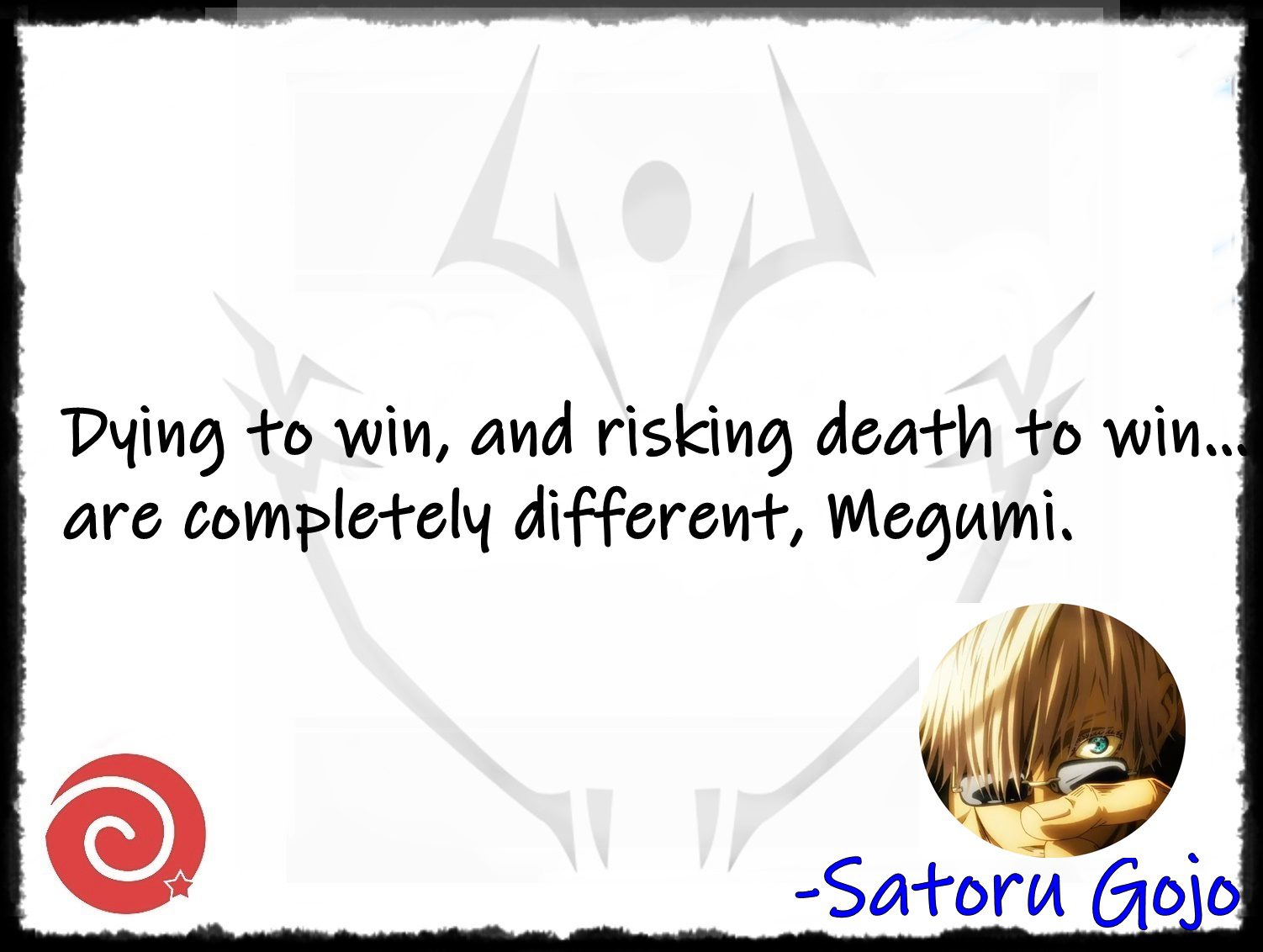 Gojo has fought Togi Fushiguru in his early days. So, he knows how strong Megumi’s father was and wants him to achieve the same rank. Moreover, he is well aware of Megumi’s innate powers that remained unexplored due to his defensive mindset.

6. “I am surprised, you thought you could beat me using your sorry excuse for a brain”

Among all the Satoru Gojo quotes, this one accurately reflects his arrogant side. He was initially irritated at Jogo for daring to face him a second time, even after what he had done to him before. He was absolutely furious when Jogo tried using non-sorcerers as a shield to limit Gojo’s movements. 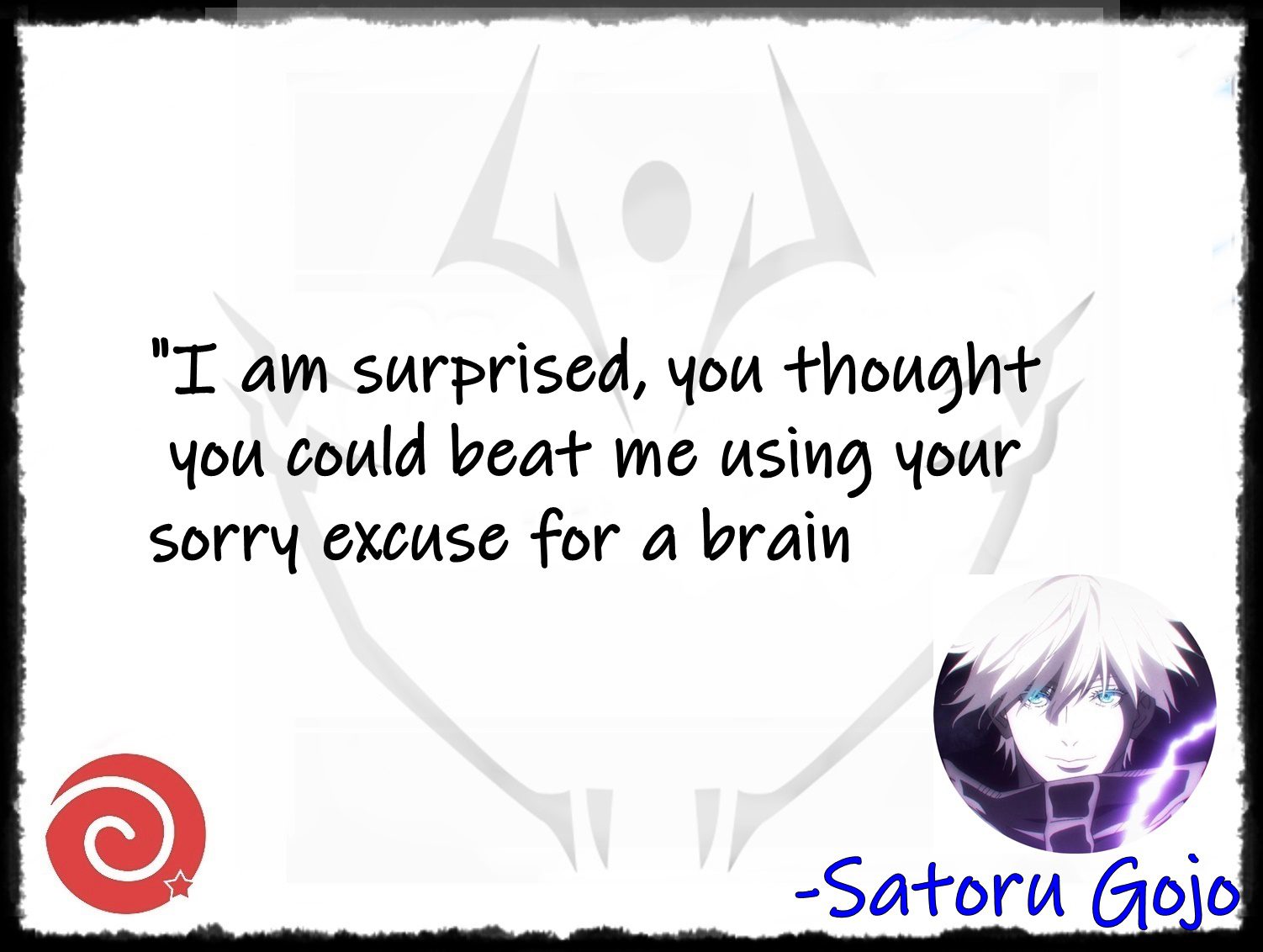 These strong words were followed by panels of absolute Gojo supremacy. He rendered Jodo inactive by breaking his arm and then going after Hanami. Before Jogo could recover and attack the sorcerers, the special grade curse Hanami was already taken care of.

Did you ever think that Gojo sensei would give such cold threats? Neither did i. But after seeing countless men getting slaughtered and transfigured by the curses. Satoru Gojo just turned into an emotionless curse-killing machine and stopped caring about the innocent lives around him. He went as far as unleashing his Immeasurable Void domain expansion for 0.2 seconds. 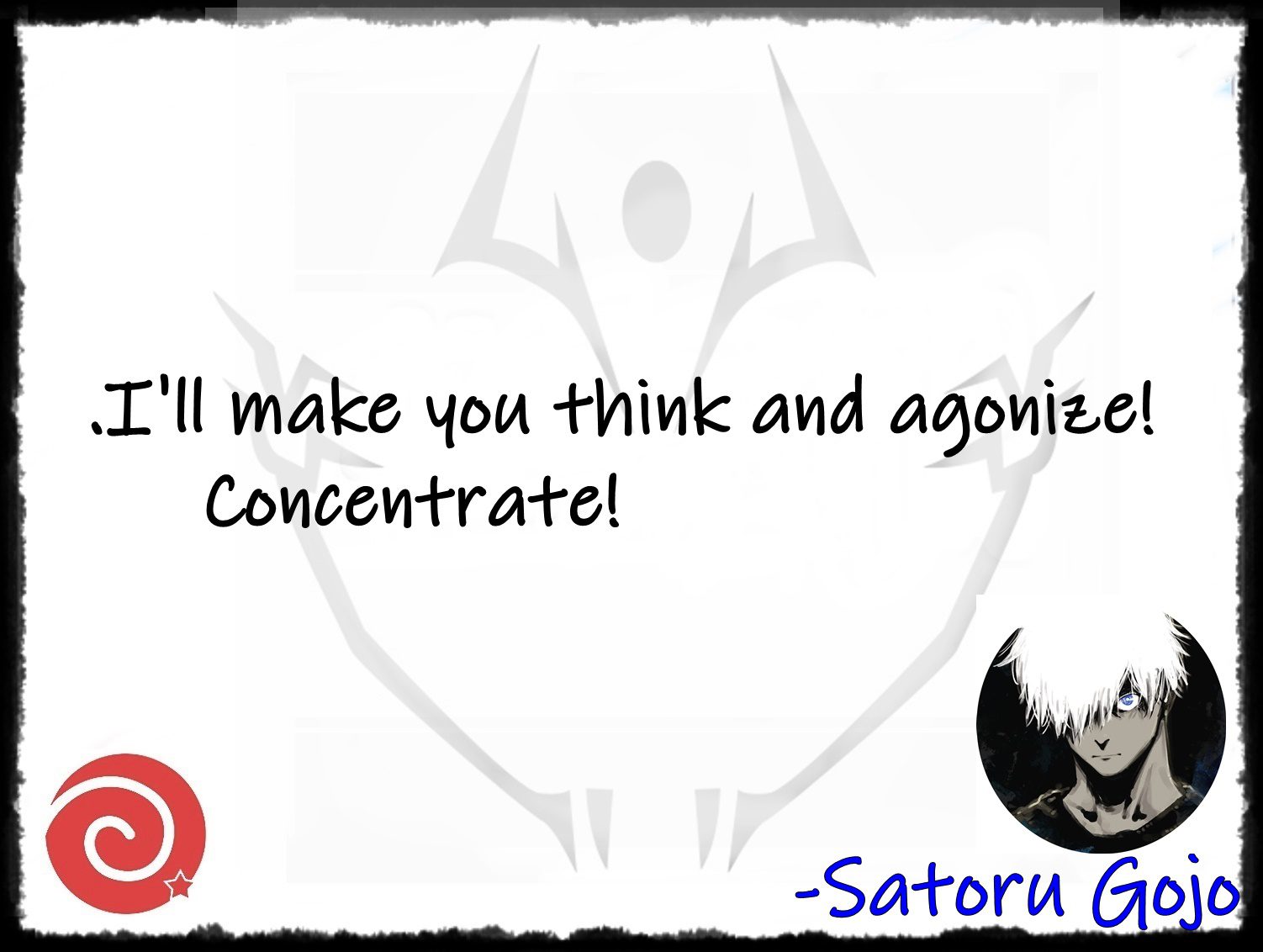 A non-sorcerer can stand Gojo’s immeasurable void for maximum 0.2 seconds without having any long-lasting effect. Yet, the amount of information flooding in everyone’s brain will be approximately half a year world. Thus, it will take any ordinary human two months of counseling for recovery.

These were Gojo Satoru’s final words before getting trapped into the Prison Realm. Considering that getting sucked into the Prison Realm is almost equivalent to death, I was expecting something more emotional. Then again, we are talking about the unpredictable Satoru Gojo here. He must have a plan for escaping, or he trusts his students to free him someday. 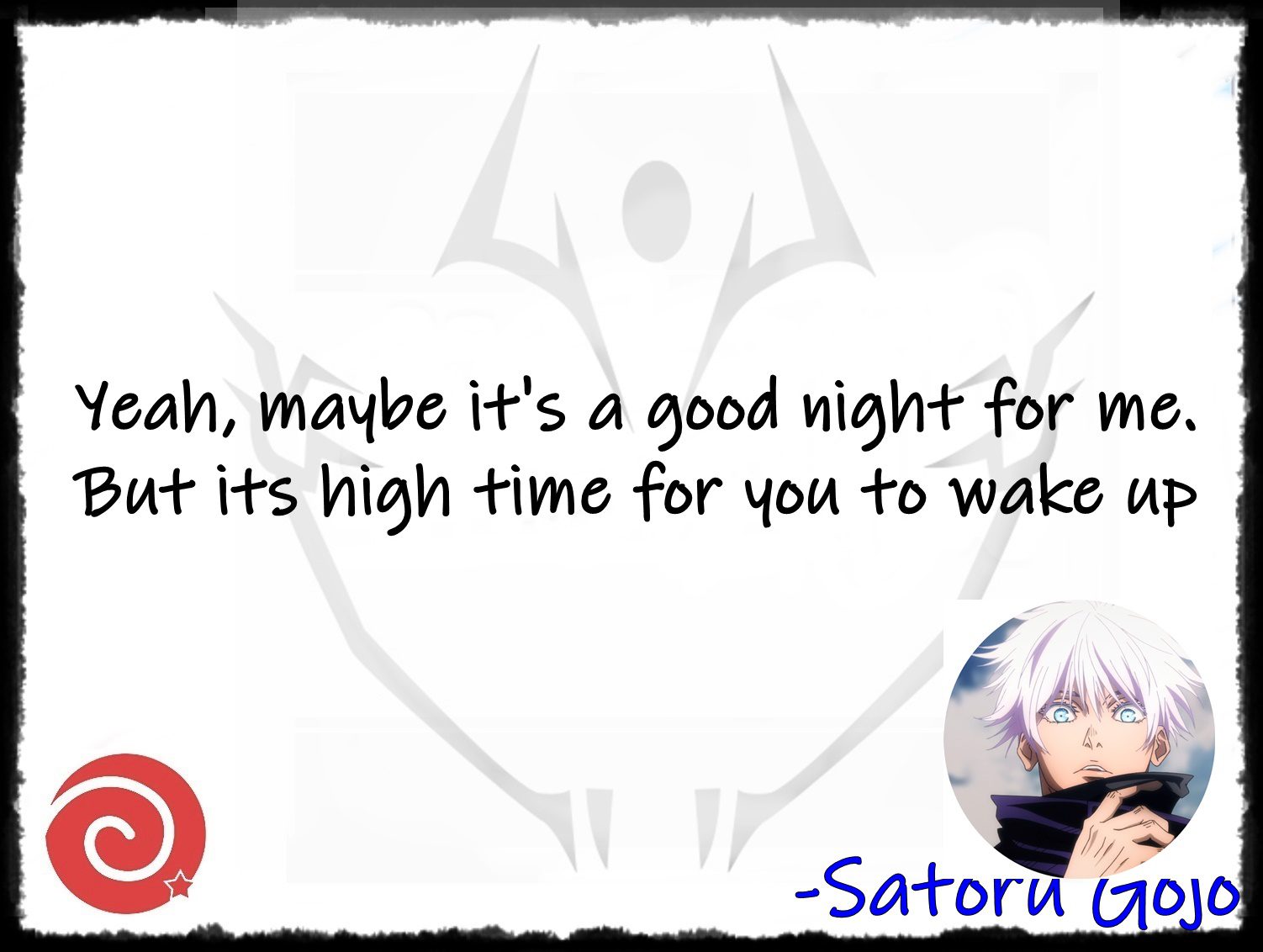 By this final quote, Gojo bids farewell to his Kenjaku-controlled old friend and asks him to wake up. This was more like screaming before deaf years since Getou is already dead. However, Gojo couldn’t resist admitting that he wanted his former best friend to wake up again for one last time. (or from Kenjaku’s control). It’s this subtle sense of sadness in his words that has inspired me to list down my favorite Satoru Gojo quotes.

9. “My six eyes tell me you are Suguru Geto…. But my soul knows otherwise.”

Gojo couldn’t believe what he saw right before his eyes. The Suguru Geto he admired so much would never have been a mindless puppet to someone else. Gojo’s six eyes are immune to illusions, so there isn’t any doubt that the person is Geto. However, his soul refused to accept the fact. We have never seen Gojo getting so emotional before. You can call this one desperate attempt to bring back the friend he lost. 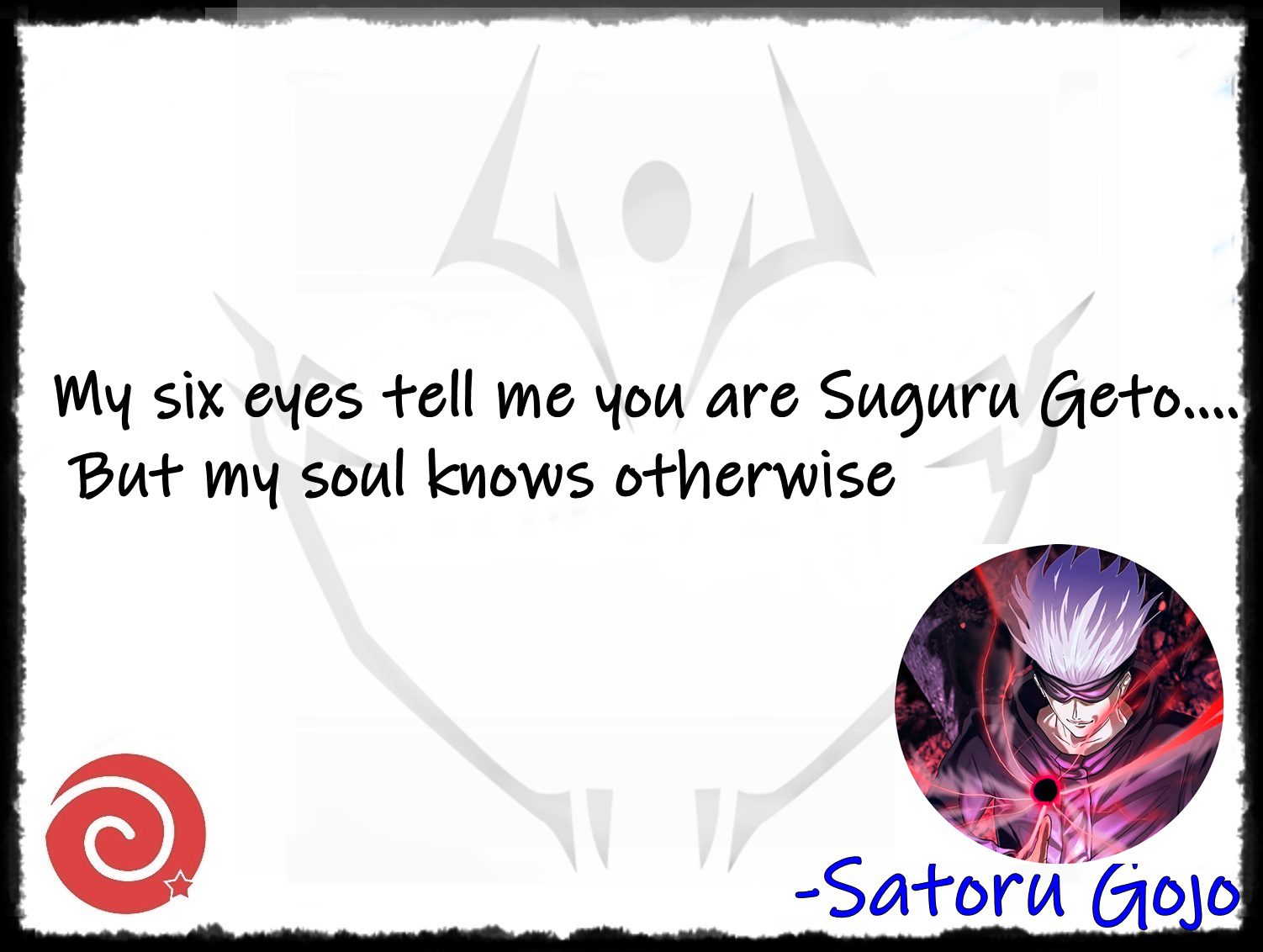 10. “Throughout the heavens and Earth.. I alone am the honored one.”

Let’s conclude this list with another one of typical Satoru Gojo quotes, where he shows off his powers. These were the words he said just before unleashing his finishing move, Purple. For those of you who don’t know, Gojo used his first Purple years before his fight with Hanami. 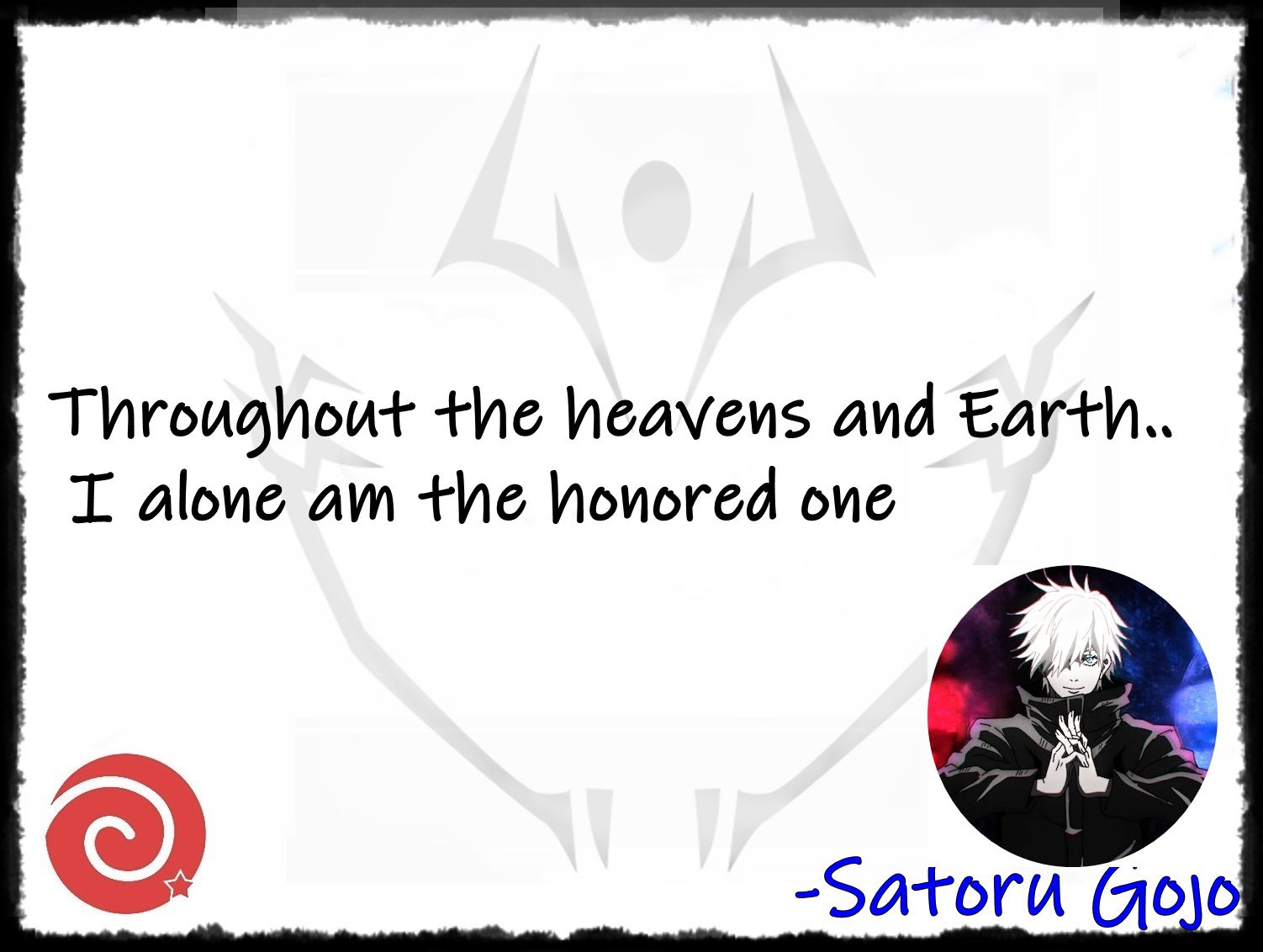 It was directed towards Megumi’s father, Togi Fushiguru. He was a gifted individual with zero curse energy, and yet he became the only person to stab through Gojo’s infinity. Despite his fatal injuries, he landed the killing blow and brought the epic fight to an end.

Also Read: Top 10 Madara Uchiha Quotes About The Messed Up World We Live In