Top 10 Erwin Smith Quote that Will Keep You Motivated

It’s not always about UwU, or ara-ara, or onii-chan; sometimes, it’s just about………. ‘Shinzou Sasageyo.’ Erwin Smith is the name that resonates in our mind everytime we hear this phrase, and why won’t it? Despite being a disposable side character, he gained groundbreaking popularity among the fans. I guess that’s the beauty of Attack on Titan: flashy things like strength, bloodline, and titan powers always fall far behind personality and charisma.

You can guess how strong Erwin’s personality was from the fact that someone like Captain Levi used to follow his orders like Bible. His leadership is the only reason why the Paradisians could explore what’s beyond the wall, and I doubt if the story would have turned out the way it did (yes, I am talking about 4/5th of the human population getting massacred) if he was the in-charge of the survey corps instead of Hange or Armin.

Erwin’s inspirational words are a source of motivation for many Attack on Titan fans even years after his death. Furthermore, a hardcore fan like me will happily watch Season 3 again just to see Erwin leading his men towards a suicidal attack just through his words, and I wonder how many other characters could have done something like that. Here’s a list of Erwin Smith’s top 10 inspirational quotes that never fail to give us goosebumps no matter how many times we hear them.

1. “If You Begin To Regret, You’ll Dull Your Future Decisions And Let Others Make Your Choices For You.”

This is the quote that led to Levi growing so much respect for Erwin and making him someone on whom he can trust his life. He said those words bluntly when Levi was in his most vulnerable state after losing Isabell and Furlan to a titan. None of us would have been surprised if Levi had sliced Erwin’s throat for being philosophical in such a situation, but instead, he realized that these unfiltered words made the most sense.

2. “Nobody can foretell the outcome, Each decision you make holds meaning only by affecting your next decision”

Erwin said these words to emphasize how uncertain the future can be. He didn’t want his soldiers to accept this messed up world as their fate, so he tried explaining to them the importance of free will. Just like how a butterfly flaps its wings, and it starts to rain, a single decision made at the right time can change humanity’s fate completely.

3. One day, we’ll break it down. This wall hiding the truth… will fall.

Being the commander of the Survey Corps, it was on him to give hope to his men on accomplishing impossible tasks, and he did that pretty well. Little did they realize when these seemingly impossible achievements started getting graspable gradually. Thanks to Hange’s in-depth research, and everyone else’s support, the survey corps did solve the mystery behind the Walls.

4. So Many Times I Thought Death Would Be So Much Easier.

Peace wasn’t the luxury that Erwin could afford at any point in his life. From seeing his teammates die right before his eyes to the citizens gradually losing faith in him, Erwin had a pathetic life. Yet, he never gave up his dream of exploring what’s beyond those walls, and that’s what makes him the greatest Survey Corps commander of all time.

5. Sir, How Do You Know For Sure There’s Nobody On The Other Side Of The Walls?

That’s the question Erwin asked his geography teacher back in his school days. This single question changed Erwin’s life from the day his father went missing trying to unravel the secrets of the walls. Totally ignoring all the brain-washing words of the military police, he grew up to become the thirteenth commander of Survey Corps, and he dedicated his life to finding the answer to this question.

What makes the phrase even more special is that these were also Erwin’s dying words. When Levi was about to inject him with titan serum, Erwin asked him the same question before his last breath.

6. It’s Us Who Gives Meaning To Our Comrades’ Lives

It’s no secret that Erwin had a lot of respect for his slaughtered comrades, who led down their lives to achieve freedom. Moments before his suicidal rampage, he reminded his men that they weren’t the only ones who walked this bloody path, and if they gave up now, the sacrifices of their predecessors would probably go in vain.

7. They Want To Know What Became Of The Hearts They Gave.

By “they,” Erwin referred to all the Survey Corps members who walked down the path of death. As Erwin was running out of options on their mission to retake Wall Maria, he could see his dead comrades right before his eyes as if they were questing the significance of their sacrifice.

8. “Everything that You Thought Had Meaning, Every Hope, Deam or Moment of Happiness, None Of It Matters As You Lie, Bleeding Out, On The Battlefield.”

Personally, this is my favorite Erwin Smith quote in this list, and even now, I am getting a chill in my spine as I recall the iconic scene. He said this when Floch tried to defy their plan that involved a reckless charge towards the Beast Titan. Instead of sweet-talking or sugarcoating his words to bring back everyone’s morale, he bluntly revealed that it’s a one-way journey, and none of them will be coming back alive. We didn’t expect him to say something like that, but miraculously everyone accepted their death and went along with the plan. 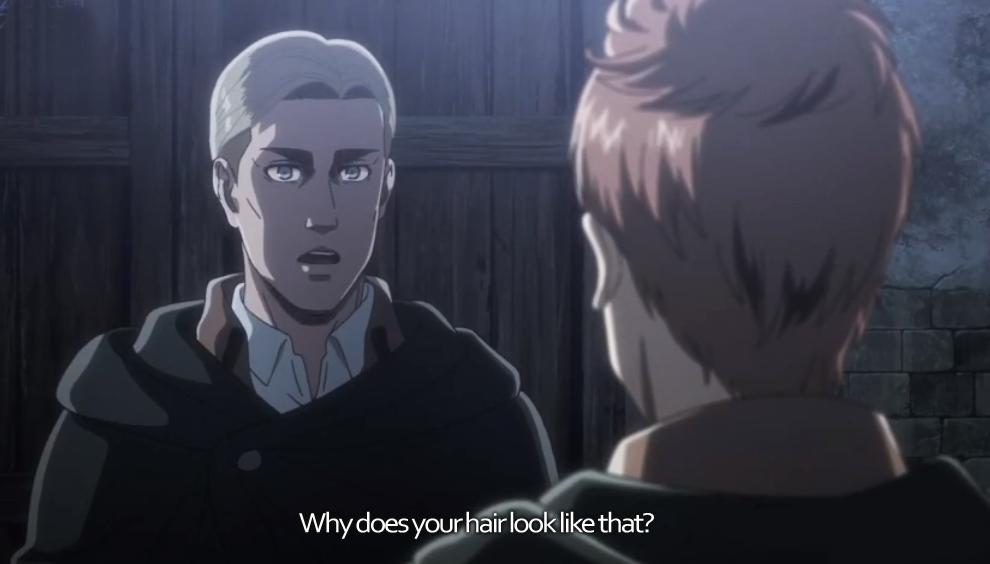 As Erwin heroically led his team towards the Beast Titan, and these words were his final attempt to let them know how precious his soldiers were to him, and all these deaths wouldn’t be meaningless at all. He was shouting out these words when he got hit by a speeding boulder and dropped from his horse.

10. “As We Ride to Certain Death, We Trust Our Successors to Do The Same For Us”

The goal of Survey Corps isn’t just to dedicate their lives to the cause of freedom but also to ensure that the ideologies of the ‘Wings of Freedom’ are passed on to the next generation of soldiers. Erwin did that pretty well by telling everyone that we expect our successors to sacrifice the same way we did, hoping that these words will somehow find their way to an aspirant soldier and ignite the flames of ‘free will’ within the people.

Beth Mead Partner: Who Is The English Footballer Dating?

48 Hours Season 34 Episode 11 may give us a glimpse into another one of the criminal cases that impacted...

How Many Episodes are there in Hunter X Hunter? Synopsis, Watch Guide, Hiatus & Comeback