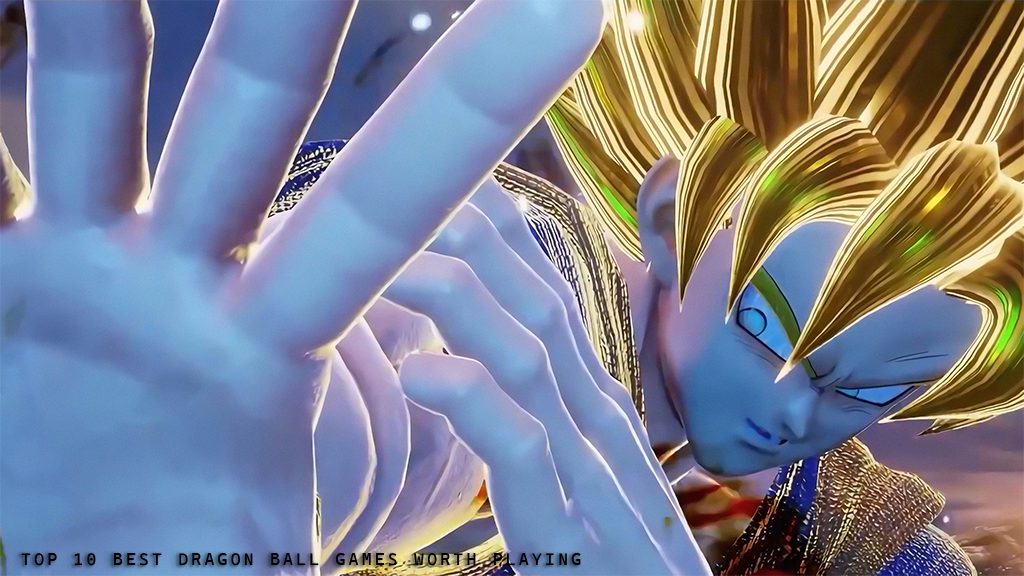 Which Dragon Ball games are worth playing? Undoubtedly, the DBZ series is one of the most popular anime series in the world. Dragon Ball is the creation of mangaka Akira Toriyama. The manga series began serializing in 1984 and still continues. Dragon Ball anime adaptation is divided into three parts: Dragon Ball, Dragon Ball Z, and Dragon Ball Super. The series follows the journey of a boy with a monkey tail, Goku. He sets on a journey to explore the world with his friend Bulma to becoming the strongest warrior in the world.

It’s been three decades since the Dragon Ball series is going on. However, the anime’s hype is not going down at all. Instead, it just keeps growing with each day. We all fell in love with the characters and especially Goku and Vegeta. We all wanted to become Saiyans like them. There is no denial that as a child we all screamed our lungs out to transform into Super Saiyan. But all that was in vain. However, there are Dragon Ball games that fulfill these wishes. As we can play as our favorite characters. Therefore, let’s take a peek at the top 10 best Dragon Ball games worth playing.

This is the first-ever Dragon Ball video game title released for Xbox 360. Dimps developed this game and Atari published it in North America and Australia whereas, Bandai Namco published it in Europe and Japan. In 2008, the game was not only released for Xbox but also available on PlayStation 3. This game became an enormous hit after its release because of the 3D Graphics and the easy-to-understand graphics. 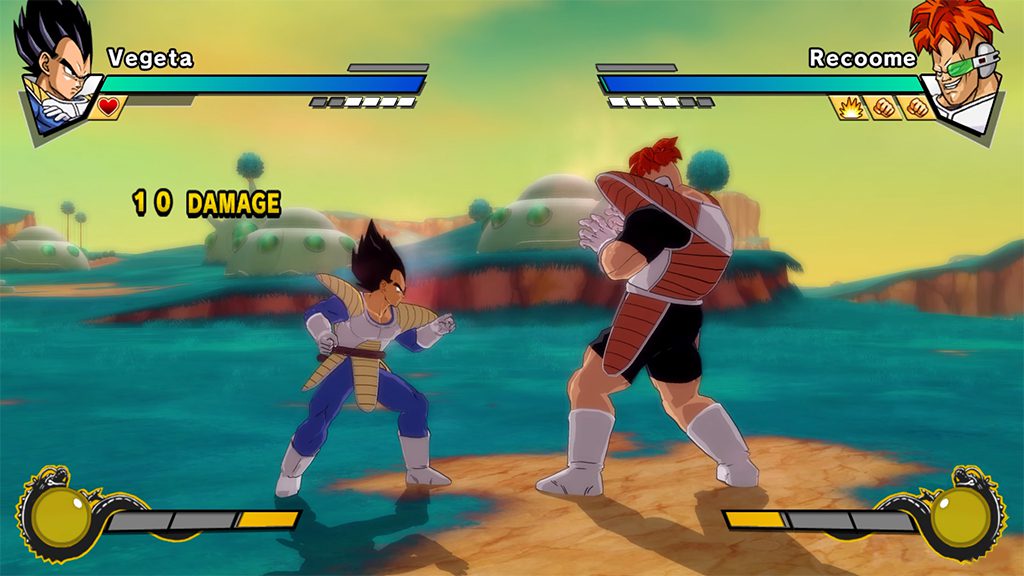 However, the game’s hype faded over time because of the lack of characters, only 21 playable characters. The game’s story only covers the Saiyan saga to Cell Saga. Further, the game also received a little criticism because many missions were repeating in nature. Also, the game couldn’t impress hardcore fighting gamers, but it is still one of the best light-hearted fighting games for spending some spare time.

Nintendo Gameboy might not have the capabilities to mimic the high-quality graphics as a Playstation 2. However, it never failed the gamers with the gaming experience. As the Dragon Ball Z Legendary Super Warrior, being a Gameboy Color game, outperformed even the likes of Playstation and GameCube in the experience. Japanese video game developing company, Flight-Plan developed the game. In 2002, Banpresto released the game in Japan whereas, Bandai released it in Europe. 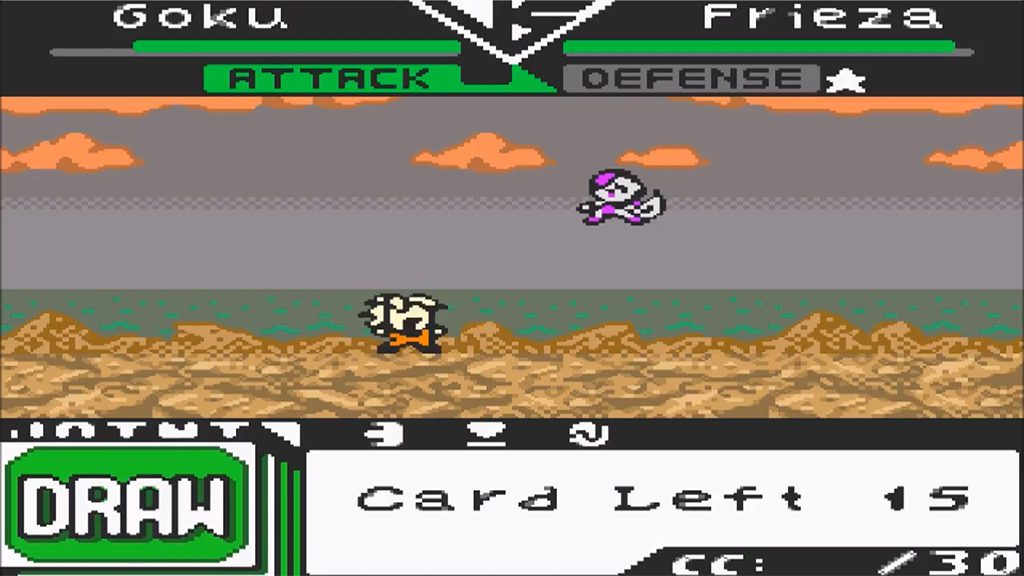 The game covered the DBZ anime’s plot from the Vegeta Saga to Majin Buu Saga. Further, the game’s mechanics are a blend of cards and turn-based strategy. There is no doubt the game’s unique mechanics and storytelling attracted the gamers to play it. This game is a classic and is one of the best Dragon Ball games which is worth playing.

We all fan went gaga when fusion was introduced in Dragon Ball Z. Gotenks is one of the coolest characters in the series. However, we all got chills when Goku and Vegeta fused into Vegito via potara earrings. Although Goku and Vegeta also have another fusion, Gogeta, when Vegeta agrees to perform the hilarious Fusion Dance. 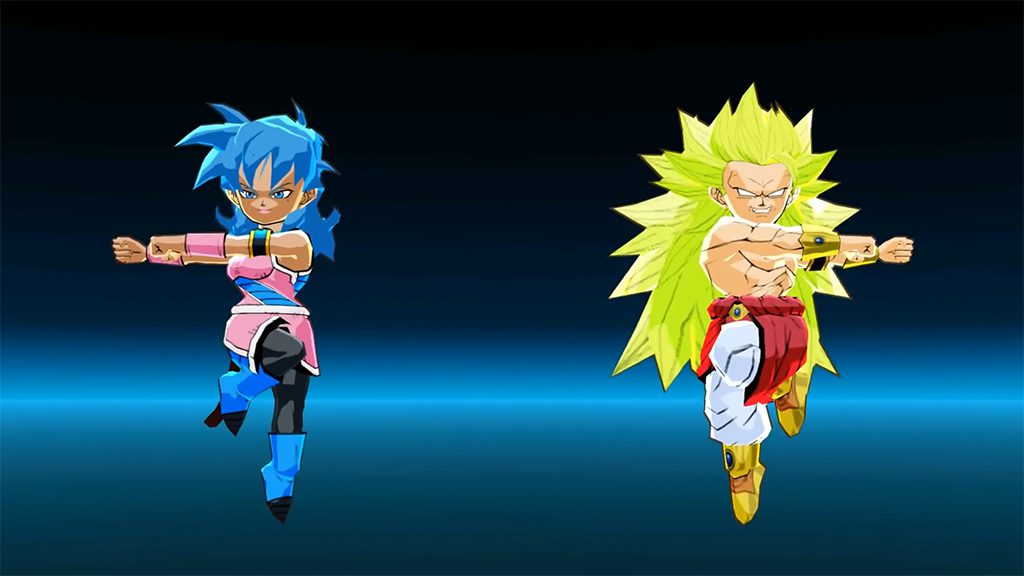 Undoubtedly, these fusion characters are insanely strong but not to forget their arrogance, which makes the character funny. We all wanted more of such fusions but couldn’t in the series. However, Bandai released Dragon Ball Fusions in 2017 for Nintendo 3DS. The game doesn’t follow the plots from anime or manga but introduces a new plot about two characters who wish for a Martial Art tournament where characters appear from the entire DBZ timeline. We also witness some unexpected fusions, which is the reason behind the game’s success.

This 2004 Gameboy Advance game covers the story of the original Dragon Ball series. The game’s story follows the journey of kid Goku when he first met Bulma and then up to when he fought King Piccolo. This came covers the entire DB series except for the Junior Piccolo Arc. The audience well received the game because being a GBA game, it offered more than expected. 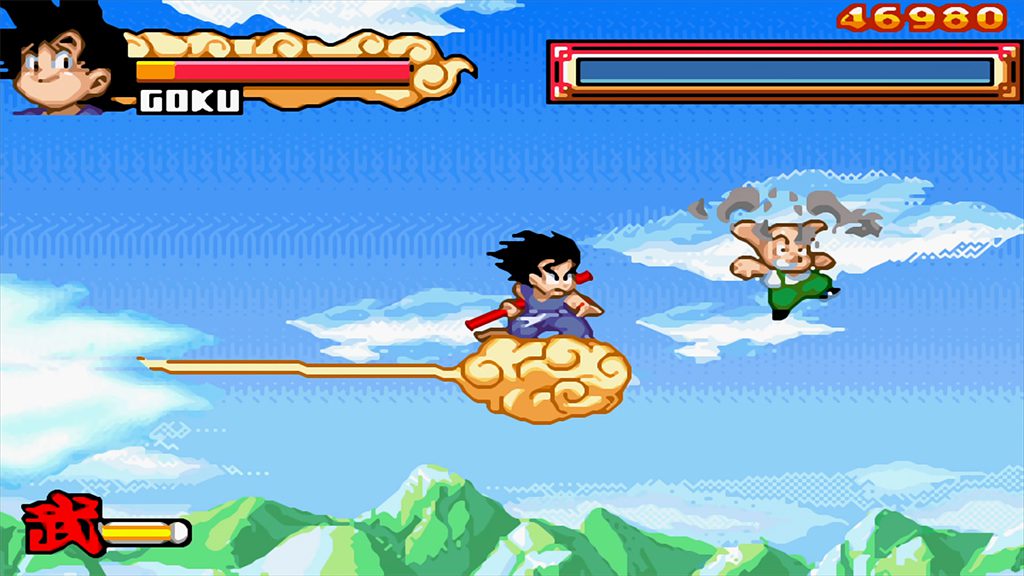 The game had over 30 playable characters. Further, the game has five modes, like story mode, one-on-one mode, versus mode which is the online multiplayer, and finally the Extra mode which unlocks after completing the story mode with Goku. The Extra mode is very similar to the present-day game’s “Game Plus” where we can revisit the story but with more content and inventory. Dimps did a great job with developing this Gameboy game. This is one of the best Dragon Ball game which is worth playing.

Fans were really digging the mechanics and art style of the Dragon Ball games like Budokai and Budokai Tenkaichi. Super Dragon Ball Z follows more of the traditional fighting style of the games like Tekken and Street Fighter II. Further, Crafts & Meister developed this game and Bandai Namco published the came in 2006 for Playstation 2. This game project was headed by Noritaka Funamizu, who was also behind the game, Street Fighter II. This game’s default mode is similar to Street Fighter II, where players keep fighting opponents one after another until they meet the final boss, Perfect Cell. There is also a training mode to master your moves and you can summon Shenron after collecting the Dragon Ball throughout the game. You can wish for unlocking character and moves, but after granting the wish the Balls will disappear and have to collect them against. Further, in this game, you can customize your character.

It seems Gameboy Advance games really gave a tough fight to console games, which had better graphics. This game is a sequel to Dragon Ball Z: The Legacy of Goku. This entire game adapts the plot of the anime and follows after the events of the first game. This DBZ game covered the entire Future Trunks Saga, Android Saga, Imperfect Cell Saga, Perfect Cell Saga, and Cell Games Saga. 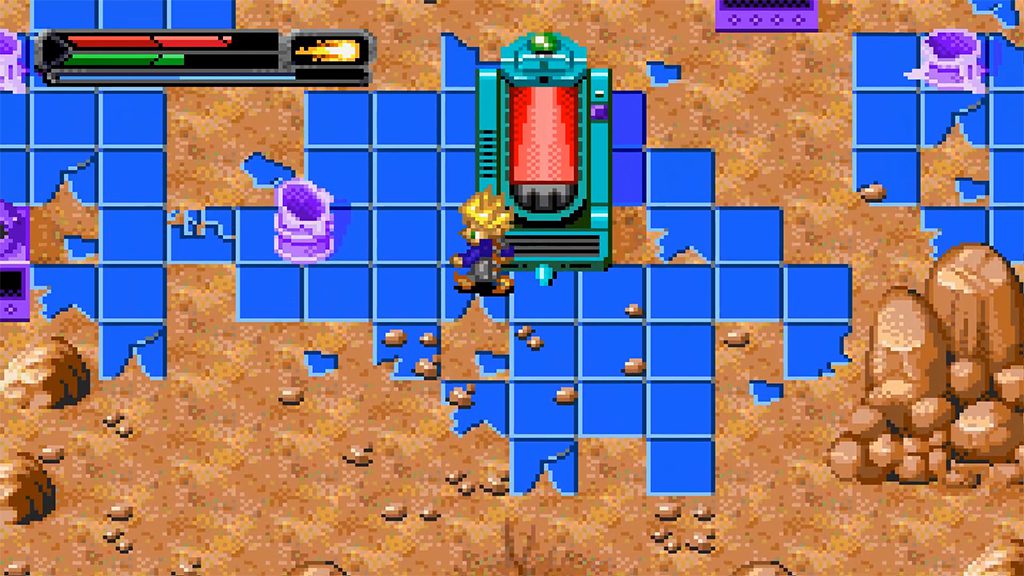 DBZ: The Legacy of Goku II

The game features a classic 2D RPG mechanic which is really easy to understand. This game is a classic and still hits with a lot of nostalgia. If you are a DBZ fan, then playing this game is a must. Dragon Ball Z: The Legacy of Goku II is one of the best Dragon Ball games.

Every DBZ fan wanted to become a Dragon Ball character, that’s where this game helps you. This game allows the players to create their own characters. There are five races, Human, Saiyan, Namekian, Majin and Freeza Race. Further, three races out of the five have the option to choose the gender. 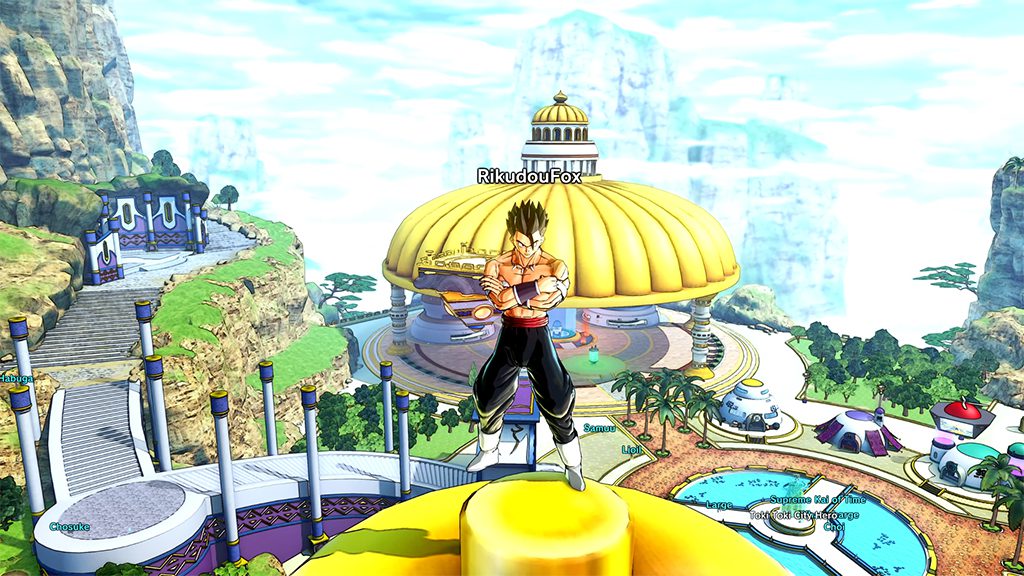 This game is a sequel to the 2015 game Dragon Ball Xenoverse. This game had similar gameplay to the first game. The game has an original story but it has events from the original manga and anime. The game is one of the best Dragon Ball games which is worth playing. Dimps developed this game and Bandai Namco published this in 2016 and by 2020 it has sold over seven million copies.

Budokai is one of the most successful Dragon Ball video game titles. Dimps developed this DBZ fighting game and Bandai Namco release it in 2002 for PlayStation 2 and GameCube. Further, in 2012 a remastered version of Budokai 3 was released for PlayStation 3 and Xbox 360. This was the first game released with dual audio, Japanese and English, in America and Europe. Since then all future DBZ games released outside Japan also have Japanese audio besides English. This game covers the plot of all the sagas from the Dragon ball series. it even includes characters from the original Dragon Ball and Dragon Ball GT. Apart from the story mode, there is World Tournament and Dueling Mode, where you can play against the CPU or other players.

Not to confuse Budokai 3 and Budokai Tenkaichi 3, as both are different games. This game was released in 2007 by Bandai Namco for PlayStation 2 and Xbox 360. the game was a huge hit that year. Budokai Tenkaichi 3 has 161 characters, which was the largest roaster of characters available in a fighting game during that time. This game is the most recent addition to the Dragon Ball video game series. Bandai Namco released this Arc System Work’s DBZ game in 2018. It is playable on multiple platforms like PC, PlayStation 4 and 5, Xbox  One, and one year later also released on Nintendo Switch. The game received huge praises for its graphics and fluid mechanics. This game story mode doesn’t attempt that from anime or manga but has its own plot. However, this game features all characters from every Dragon Ball series, even GT and the latest Super. However, players appreciated multiplayer more than its single-player story mode. Because of the multiplayer’s success, Dragon Ball Fighter Z is also a part of many esports tournaments. Undoubtedly, it is the best Dragon Ball game and it is worth playing,