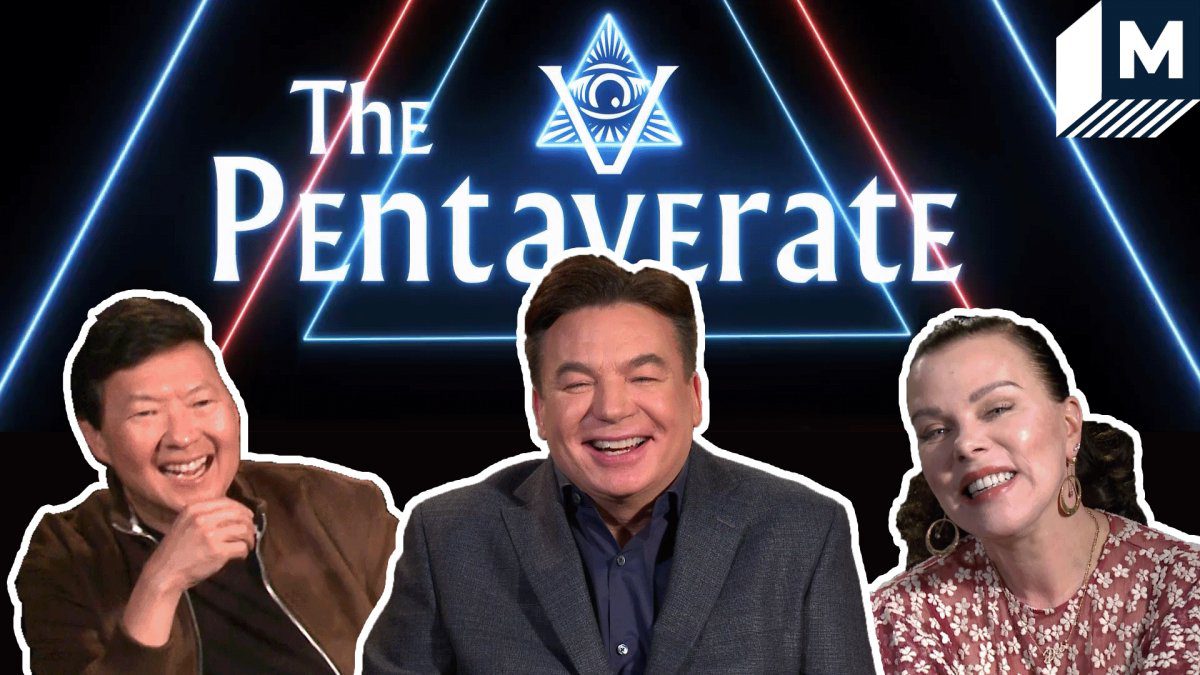 Do you love thriller shows? Here is a very interesting suspense-oriented miniseries for you. The Pentaverate ending has so many mysteries that will keep your interest alive. Mike wonderfully plays many characters in this show and excelled in all those.

The Pentaverate is an American comedy conspiracy streaming television series. Actually, it is a spin-off of Robbie Fox’s romantic black comedy film of 1993 named “So I Married an Axe Murderer”. This television miniseries has a total of 6 episodes and all the episodes together premiered on 5th May 2022 on the famous OTT platform, Netflix. This amazing show involves Jax Media as the production company. It has a rating of 6.0 out of 10 according to IMDb. The Pentaverate is filmed in London, England, UK.

What is the storyline of The Pentaverate? Who are the cast and characters involved in this TV show? What will happen at the end of the miniseries? Who are the crew members in the show? This blog contains the answers to all these questions in brief along with the other details you need to know about The Pentaverate.

Summary of the miniseries

The Pentaverate is a miniseries that focuses on the solution to global climate change and the conspiracies and thrills while doing so. Hobart, a nuclear professor, is kidnapped by a secret intelligence group, the Pentaverate. They kidnapped him to take over his place of Jason. There were four other members and Jason died. Meanwhile, Ken, a news reporter, promises his boss to bring a wonderful piece of news after he gets fired due to a lack of viewership.

After Hobart realizes his fake death in the real world, he agrees to be a part of the group working on the climate change issue. Ken went to the Canadian Conspiracy Convention with a camerawoman, Reilly. There they met Anthony who told them about The Pentaverate and Ken sees this as a great opportunity for him to get back to his job. Maester examines Jason’s body and declares that he had been actually poisoned. After this Hobart also dies because of poison.

The supercomputer they made was named mentor. Bruce, a group member, thought that people doesn’t deserve their help. Thus he wanted to sell it and become the richest person. For this, he needed 3 keys at least. To get three keys he wanted his partner-in-crime, Skip Cho to take over Jason’s place. This was the reason why he poisoned Jason and then Hobart.

Ken touched the spare key accidentally and then the key got attached to his DNA i.e. now only he could use that key. Bruce conspired again Zen and accused him of trying to expose The Pentaverates. Reilly revealed that she was actually a part of Fimbra Manus and was sent to bring Zen to the headquarters due to the lack of diversity over there.

Ken manages to escape from the lockup. Bruce and Cho were now surrounded by Ken and his allies. Bruce then threatened them to kill Reilly by pointing a gun at her. Meanwhile, Anthony rushed towards Bruce and they both fell into the moon door.

Now, Lordington dissolves the secret society. They revealed their actual plan of bringing Zen over there. They wanted Zen to give his soul to the supercomputer, Mentor, to make it a kind terminator who would never turn against humanity. Zen agrees and did the needful. The other three members took the pill and died.

Years later, the narrator told about the success of the Mentor i.e. the attempt of The Pentaverates against the problem of global climate change. The last scene shows Bruce on a beach with the face of Rob, a famous actor, with the help of the Face/off surgery. His survival after falling into the Moon Door is still a mystery.

Cast and crew of The Pentaverate

The creator of this TV miniseries is Mike Myers and its director is Tim Kirkby. Jeremy Irons is the narrator of The Pentaverate. The executive producers of this show are Mike Myers, Ed Dyson, Roger Drew, Tim Kirkby, John Lyons, Jason Weinberg, Tony Hernandez, and Lily Burns.

The roles played by Mike Myers in The Pentaverate are Ken Scarborough, Anthony Lansdowne, Rex Smith, Lord Lordington, Bruce Baldwin, Mishu Ivanov, Shep Gordon, Jason Eccleston, and Shrek. The other cast and characters of the miniseries include Ken Jeong as Skip Cho, Keegan-Michael Key as Dr.Hobart Clark, Debi Mazar as Patty Davis, Richard McCabe, Lydia West as Reilly Clayton, and Jennifer Saunders as The Maester and Saester of Dubrovnik. Also, Rob Lowe and Maria Menounos appear as fictionalized versions of themselves in the series.