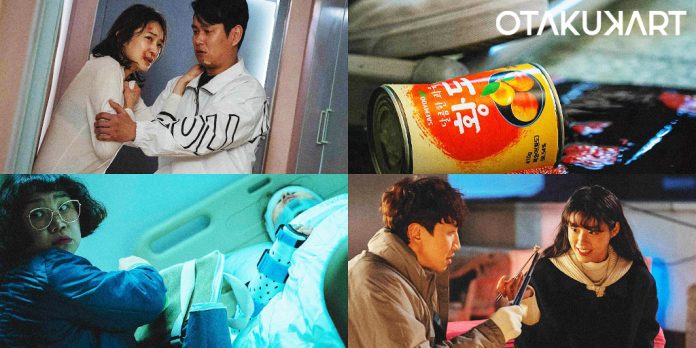 With the release of The Killer’s Shopping List Episode 8, we will come to the conclusion of the short yet sweet murder-mystery drama set in a small-town neighborhood of Nawoo Dong. While it will be sad to let the stellar cast of characters go, viewers can only feel grateful since the director of The Killer’s Shopping List, Lee Eon Hee, originally planned for the on-screen adaptation of the novel by the same name by author Kang Ji Young to be a movie! But fret not, since the popularity of the show may give the showrunners a little push into adapting yet another novel by Kang Ji Young, similarly named “The Killer’s Shopping Mall”. All we viewers can do is keep our eyes open and our fingers crossed.

The near-death of the Chairwoman Yang Soon, which caused her to go into a state of comatose has also spread an atmosphere of silent chaos amongst the workers of MS Mart. Meanwhile, viewers can’t help but be frustrated at some of the fallacies in the story. If the police officers know the kind of danger the women of the neighborhood after the death of two young women, why in the world are they going out their day normally without arranging special forces for the protection of the inhabitants?

Furthermore, why is Oh Cheon Won not kicked out of Nawoo Dong after all of the havoc he has caused? We already know that Oh Cheon Won met the Chairwoman right before she was attacked. And the police are lenient enough to take him as a reliable eye-witness. To avoid pulling our hairs out in frustration, we shall talk about the possible fan theories, possible plot points, and the release date of episode 8 of The Killer’s Shopping List.

Meat Is Finally Off The Chopping Board

Meat, who had been acting suspicious about Veggie all week, is finally off the list of suspects as we find out his reason for tailing Veggie was to protect her from her abusive husband, who’d had just returned from overseas. Veggie, who was frazzled to the point of quitting her job in the mart, can finally live in peace as her husband has been arrested. It doesn’t excuse the fact that Meat stalked Veggie to the point he knew her apartment floor number and her predicament related to her husband despite her not telling him.

The Killer’s Shopping List Episode 8 will be released on 19th May 2022 (Thursday) at 10:30 PM KST. For other time zones, that is 11:30 PM AEST, 7 PM IST, and 8:30 AM EST. With a plethora of fan theories and a lack of the English translation of Kang Ji Young’s novel by our side, all we can do is speculate on who the serial killer of Nawoo Dong might be.

On top of the list of the suspects is Seo Chun Kyu, aka Yul’s dad. Fans are not the only ones suspecting him, either, since Products Aunt possibly suspects him too. Her taking the pine-cone scented bleach to get some kind of affirmation from the Chairwoman who had had barely woken from comatose is proof enough of that. Furthermore, we have also discovered that his wife is Vietnamese and has stopped coming to the hospital despite him maintaining that she is still there. As a cherry on top, we find out that both his wife and his daughter Yul have been victims of physical abuse.

Fans are also not leaving Oh Cheon Won and the old policeman, Kim Doo Hyun, alone either. They think they are suspicious, and some of the wildest fan theories suggest that they are in it together. But for lack of motive (or because it hasn’t been revealed yet), this theory doesn’t stick too much.

The Killer’s Shopping List Episode 8 will first air on Korean television channel tvN. After that, viewers can stream Ep 8 with subtitles in any language of their choice on Rakuten Viki by clicking here. Furthermore, The Killer’s Shopping List Ep 8 is available for streaming on Viu and iQiyi from the day after airing, i.e., 20th May 2022, which you can access if you live in the limited regions they provide their services to.