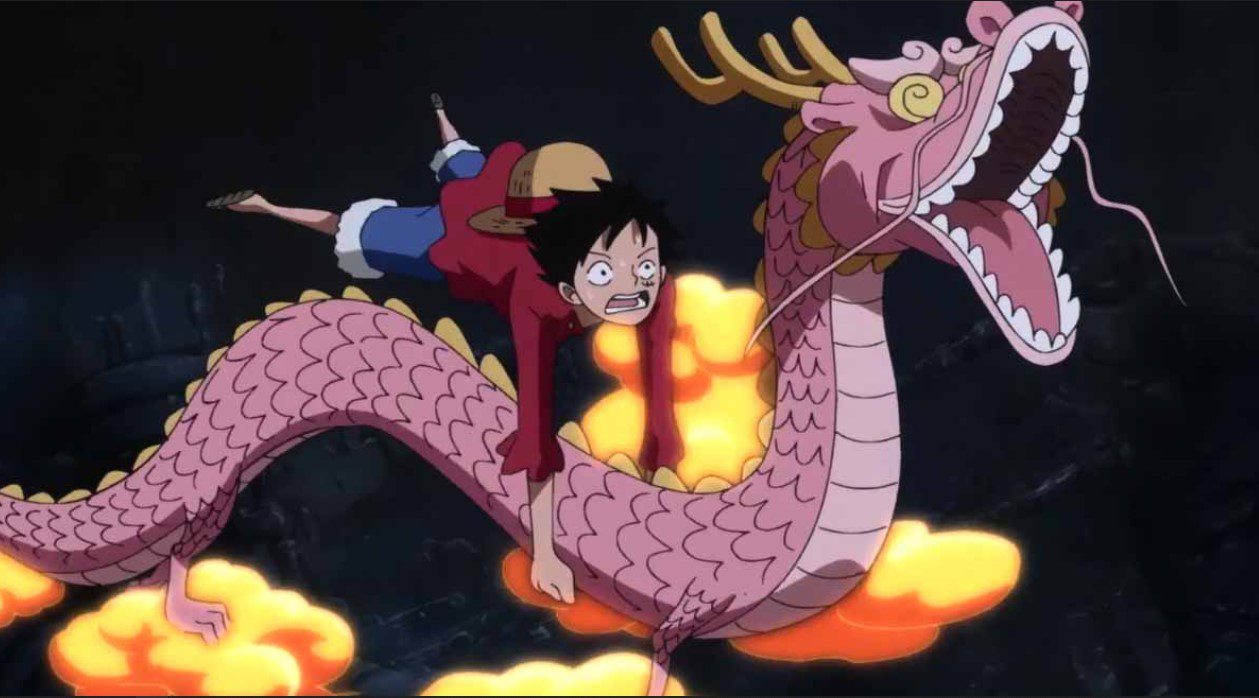 One Piece 1023 spoilers have been released early this week, and it will be interesting to see what will happen next. The previous chapter of the manga saw Sanji and a newly revived Zorro take on two of the All-Stars in an epic battle that has just begun. There are several developments from the last chapter that will be interesting to look at as they will determine the course of this war. We also got the latest updates about the Tobiroppo, and it looks like they are all defeated, so that we won’t be seeing them for a while.

So for the upcoming chapters and spoilers, we expect to get updates from Zorro and Sanji’s battles together with Momonosuke’s side as these two areas seem to be amongst the most interesting ones. To simply sum things up, the big battle that would impact this war heavily is that of the All-Stars and the commander of the Beast Pirates himself. We have already seen the side of the All-Stars, but at the moment, Kaidou faces off against Yamato, and we have not seen more than their hybrid forms at this moment.

One Piece chapter 1023 will officially release over the weekend following the usual schedule. The full spoilers for the upcoming chapter are expected to come later this week. Then this Friday, we will get the fully translated scans for the upcoming weekend’s chapter. 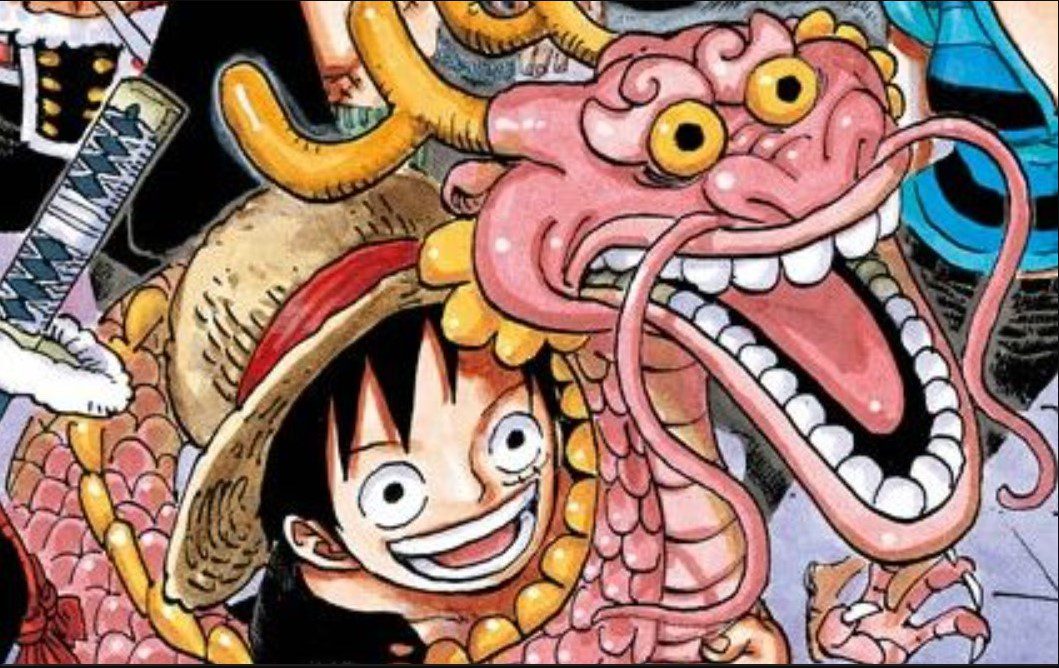 We have received the full spoilers thanks to Redon, courtesy of the One Piece subreddit.

The Chapter will be titled “As alike as two peas in a pod.” (might differ from official translations)

In the cover, Vivi appears sitting on top of the tree branch while some birds perch on her arms. Carue appears angry on the ground below as he is jealous of the birds.

One of the beast pirates tries to shoot at Zoro, but Kawamatsu knocks him out before he could shoot. Hyougoro tells his team to stop anyone who would interfere and warns them not to get in the way of Zoro and Sanji.

Marco watches King and Queen as they get up and thinks back when White Beard was talking to him. He once told him that a long time ago, before the time of Mary Geoise, there was a country of gods above the red line.

While Marco is still lost in his thoughts, some of the beast pirates tried to sneak a shot at him. Izou arrives in time to protect him and shoots back at them as he takes Marco to safety.

Queen and King return to the battle while Queen raps. He tells Sanji that his attacks did not affect him at all and revealed that the all-stars are the Drought, Plaque, and the Wildfire, the three calamities that protect Kaidou.

Queen attack Sanji with laser beams, but they dodge; Zoro noticed that something seems to be worn with Sanji as Sanji tells him that after wearing the raid suit for the second time, his body feels strange.

As they talk, King attacks Sanji with his sword, but Zoro intercepts him with his swords. Queen tries to attack Zoro, but Sanji steps in and blocks him with his flaming kick. Queen thinks that Sanji’s legs are those of a robot and can create fire as he wishes as a form of modification by Germa 66.

Sanji tells him that he is 100% human as Queen wonders if humans who are not from the Lunaria race can create fire. As he talks, we see King watching from a distance, listening in silence. Sanji continues with his flaming kicks assaults at Queen, but he defends with his arms encased with his Busoshoku Haki. Queen ends by saying that it doesn’t matter what Sanji is since he is facing a cyborg that even Vegapunk could not create.

Zoro and King continued with their fight, and King transformed his sword into a comb-like shape. He takes Zoro’s two swords away from him a punches Zoro. Zoro blocks with his third sword, which was on his mouth, while he tells King that his battle style is strange.

Luffy and Momonosuke Return to Onigashima 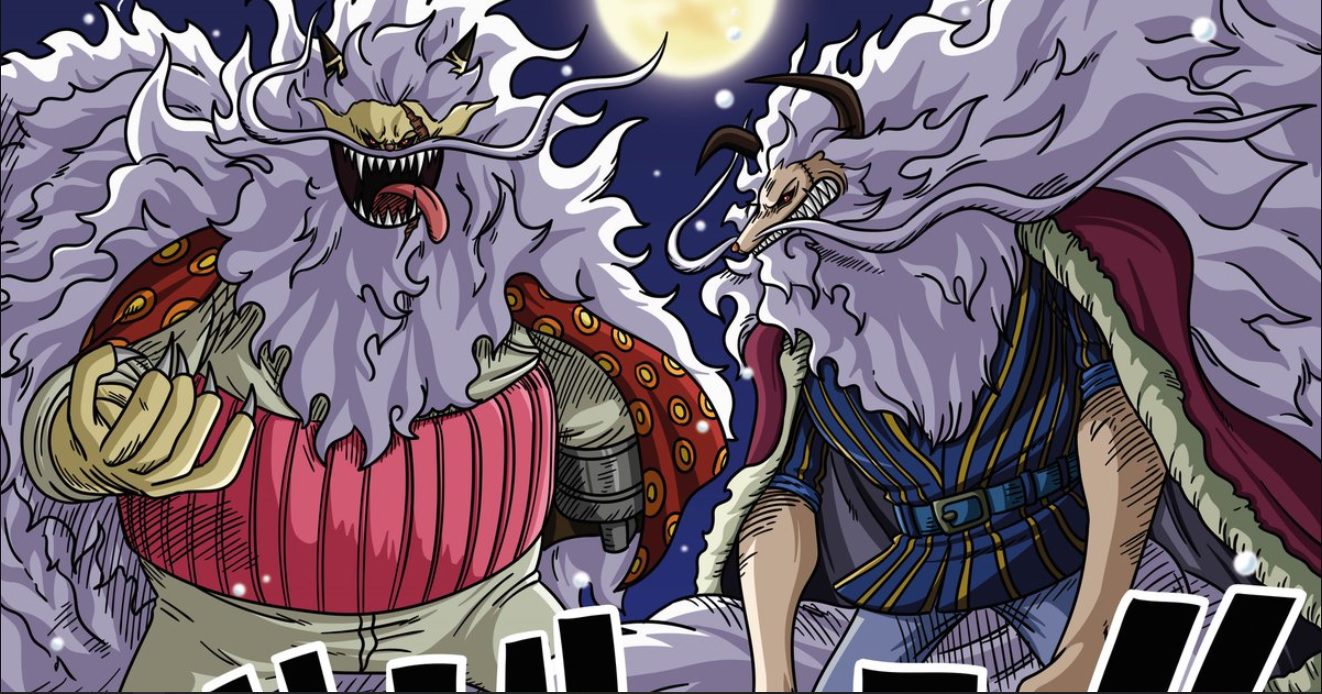 King continues with his mixed fighting style, telling Zoro that there is no need for a fixed form and style in real battle. Zoro agrees and tells King that he never declared himself a swordsman while he picks up his two swords and returns to the fight.

Zoro is determined to win, and if it is necessary, he may need to win this battle by biting King’s neck and tearing his windpipe.

Hyougoro and Kawamatsu watch from a distance as they realize that Zoro is proving to be a formidable swordsman. Zoro reminds Hyougoro about Ringo’s lord, Shimotsuki Ushimaru, in his younger days, and his fighting style is similar. They also say that Zoro’s returning of Shusui, the sword of the legendary samurai Shimotsuki Ryuma to Wanokuni must be by fate.

While King and Queen continue their fight, we see an image of Ryuma, and his left eye was also damaged in the same way Zoro’s is.

On the second floor of Onigashima castle, Jack and Inuarashi are fighting. Jack is in his hybrid form, and his legs are still that of a mammoth. His torso and arms are still of a human. His head is a mix of his mammoth and human form, and he maintains his large trunk and large fangs with a smaller head with no mammoth ears.

Outside the Onigashima caste, just when Nekomamushi attacks Perospero. In front of Carrot and Wanda’s gaze, Nekomamushi approaches Perospero, saying that he wants to avenge Pedro’s death. Thanks to the hole left by Kaidou on the roof, Nekomamushi transforms into his Sulpng forms before Perospero’s frightened gaze.

On the second floor of Onigashima’s castle, Raizo and Fukurokuju are still fighting. Fukurokuju tells Raizo that Wano can not trust a child as Shogun. But Raizo tells him that he should not underestimate youth since people can grow.

On Wanokuni’s coast, the Heart Pirates are upset and have drawn their weapons at something that reminds them about Kaidou. On a huge double spread page, we see a giant dragon planted in front of Luffy. It’s Momonosuke, and Luffy remembers the first time they met.

Momonosuke is now 28 years old, and Shinobu has made him grow 20 years with her powers. Shinobu cries aloud as she remembers the moment she raised Momonosuke. We only see a part of Momonosuke’s arm, and his entire body did not appear.

Adult Momonosuke appears to be taller than Shinobu, and his size is about Luffy’s, and Shinobu’s head only reaches Momonosuke’s elbow. Shinobu also noticed that he looks exactly like someone who was not revealed at this point. Luffy calls Momonosuke, and they leave to take back Wano from Kaidou.

Momonosuke and Luffy Returns to The Fight

The spoilers have finally revealed more developments towards the final fight on the rooftop. But it will be likely that before that happens, we will get some time on how Yamato has been holding up in Luffy’s absence. And before the fight could continue, we will likely see how Kaidou managed to defeat Luffy once again.

The last time Luffy was on the rooftop, he appeared to be evenly matched against Kaidou, but out of the blue, we saw him falling into the ocean. So it will be interesting to see what new technique Kaidou used to knock Luffy out despite him showing conscious control and infusion of his Hakushou.

Momonosuke taking Luffy to Kaidou shows how determined he is this time as he even went as far as having Shinobu use her powers to turn him into an adult.