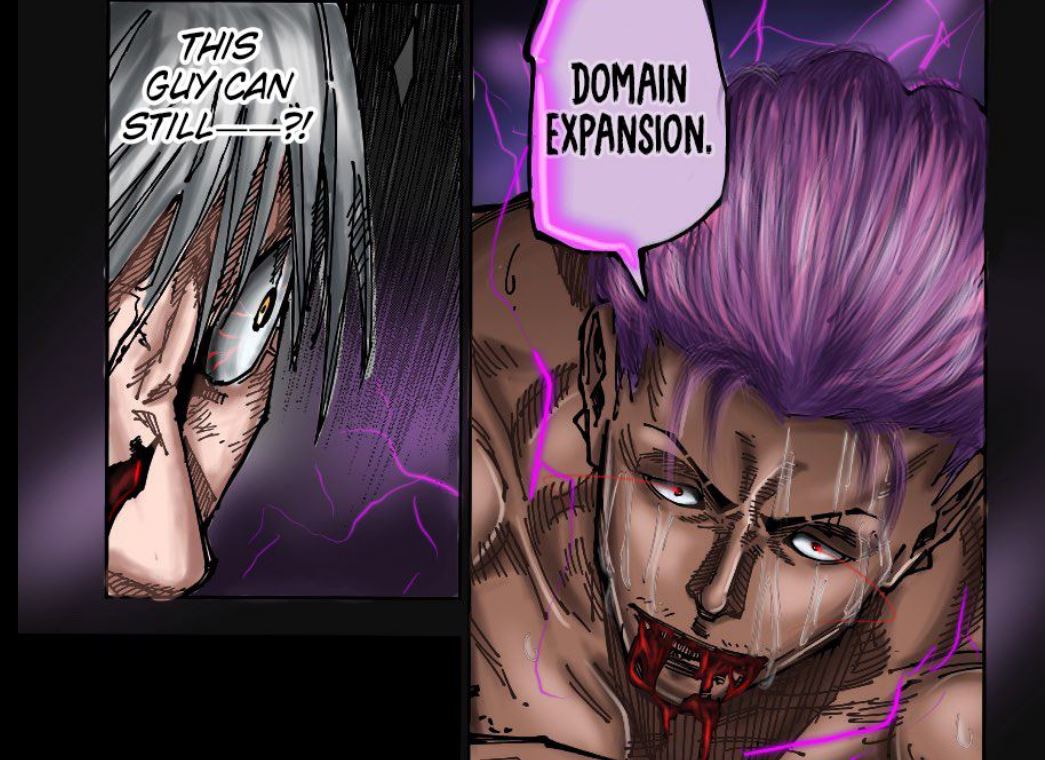 The spoilers of Jujutsu Kaisen Chapter 188 have just dropped, and let me assure you that the chapter will be nothing less than an action-packed rollercoaster. Kashimo having a lot more battle experience, is well aware of the ways to counter Hakari’s reversed cursed technique. He almost gets him by landing a fatal blow on Hakari’s head, but the third-year student somehow manages to regain his composure. Thus, Hakari confirms that he wasn’t joking when he claimed himself as unkillable after hitting the jackpot.

On the other hand, Hajime Kashimo, someone arrogant enough to challenge Sukuna, won’t go down without a fight. He lands a fatal blow on Hakari moments after his invincibility ceased. Bleeding alarmingly, Hakari tries to unleash his domain expansion once again. This is undoubtedly Hakari’s biggest gamble, and we can’t wait to see if it will work out. Here, we bring you the latest updates and spoilers of Jujutsu Kaisen manga.

The chapter continues with the fight between Kanji Hakari and Hajime Kashimo. The two sorcerers are seen dashing parallelly at high speed amidst the metal containers. They make the most of the environment around them and keep throwing scrap metal at each other. The fight continues for some time, and then Kashimo smashes Hakari’s face from a point-blank range. He knows that curse energy primarily originates from the stomach, but the reversed curse energy comes from the head. So, landing a fatal blow on the face will effectively cut down the flow of cursed energy.

However, Hakari starts healing from the point it was broken, and he recovers in no time. While healing his damaged brain, he expels out Kashimo’s excess cursed energy from his nose. To Kashimo’s despair, Hakari keeps growing faster and strong at an exponential rate as he heads toward the time limit of his invincibility. In other words, Hakari sacrifices his immortal body to narrow down the power gap between them. He keeps beating Kashimo into a pulp till Kashimo finally unleashes the trump card he has been holding up his sleeves.

It turns out that Kashimo has accumulated charge elsewhere just to strike Hakari down the moment he loses his invincibility. He connects with his Ruyi staff, thereby resulting in a massive charge flow stabbing through Hakari’s vital organs. The plan works out pretty well, and Hakari loses a large part of flesh on the right side of his abdomen. Even in such an awful state, he tries to unleash the Restless Chamber again. This can cost him his final seconds, but what other option does he have? We will update this section if more raw scans surface later.

Chapter 188 of Jujutsu Kaisen manga is not on a break this week and will be released on Sunday, June 19, 2022. The manga is heading towards the climax of Kinji Hakari vs Hajime Kashimo due, so don’t miss out on the new chapters dropped every Sunday.

Where to Read Jujutsu Kaisen Chapter 188?

Jujutsu Kaisen Ch 188 will be free to read on different online platforms like vizmedia, mangaplus, and Shonen Jump’s official application. If you want to access the entire catalog of 188 chapters, you must switch to a paid subscription. As a fellow reader, I suggest you not ruin the experience by resorting to piracy.