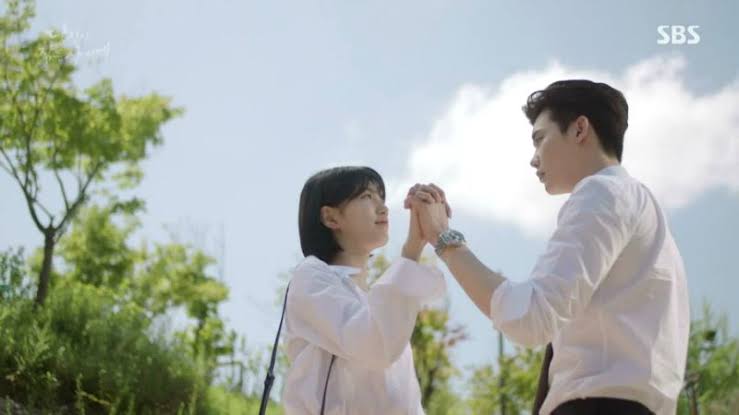 While you were sleeping

This series has a perfect harmony between various genres like romance, mystery, drama, fantasy, and of course, comedy. And we can definitely not forget its beautiful OSTs which melted everyone’s heart. So to sum up, you should definitely watch this amazing Korean drama this summer.

“While You Were Sleeping” is one of the best Kdramas of Lee Jong Suk and Bae Suzy. They have really raised our standards after this series and we cannot help but re-watch the drama again and again. Talking about raising our standards, let us not forget how Jung Hae In grabbed everyone’s attention with this drama and gained instant fame because of his amazing acting skills.

Along with the cast, the direction and the writing are mesmerizing and the way they have made everything so relatable is very amusing. Here is all the information about where to watch “While You Were Sleeping” episodes so that you can see what happens in the Kdrama.

All about “While You Were Sleeping”

At first, Nam Hong Joo could not change anything which she saw in her dreams and was quite disappointed, but then came Jung Jae Chan who changed the future that he saw in his dream, giving a ray of hope to her. The three main leads end up connected to each other through their dreams and start searching for the meaning behind them. Will the trio be able to use their abilities to protect their loved ones?

Lee Jong Suk in While you were sleeping

Meet the talented cast of “While You Were Sleeping”

Lee Jong Suk – Playing the role of Jung Jae Chan is Lee Jong Suk. He plays a rookie prosecutor who is playful but very hard-working. He too suddenly starts getting these dreams and gets entangled with Nam Hong Joo. Lee Jong Suk is 32 years old internationally. Fans love his charming personality and acting skills in more dramas like “W: Two Worlds”, “Pinocchio”, and “Romance Is A Bonus Book”.

Bae Suzy – Bae Suzy plays the role of Nam Hong Joo, who starts having these peculiar dreams in her childhood. The audience loved her performance as she made the character very relatable. Bae Suzy is currently 27 years old internationally. She is also popular for her amazing roles in “Start-Up”, “Vagabond”, and “Uncontrollably Fond”.

Bae Suzy in While you were sleeping

Jung Hae In – The character that gave us a huge second lead syndrome, Han Woo Tak was played by Jung Hae In.s old internationally. Currently, Jung Hae In is 34 years. Many viewers were highly charmed by his role and fell for his personality and talent. He is also famous for his exceptional performances in “Snowdrop”, “Something In The Rain”, and “D.P.”.

So Where To Watch “While You Were Sleeping” Episodes?

For all the excited fans who are curious about where they can watch “While You Were Sleeping” episodes, we have a piece of good news. The Kdrama is available on several platforms. You can watch the series on Rakuten Viki, WeTV, Hulu, Apple TV, and iflix. All these streaming platforms also provide subtitles in various languages, so rest assured. So what are you waiting for? prepare your popcorn and get ready for an exciting journey filled with mystery, heart-tickling romance, comedy, and a wholesome plot.