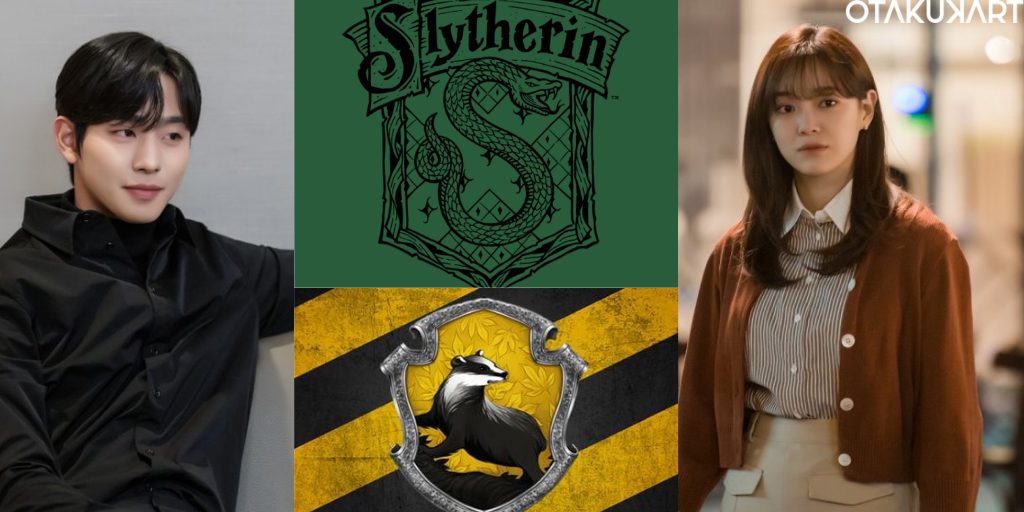 The story of the boy who lived and Hogwarts and the K-drama series A Business Proposal are unarguably two of the best things that have ever happened on this planet. The sorting ceremony at Hogwarts is one of the most traditional and important events that take place in the Harry Potter universe. According to our personalities, the sorting hat (although battered very important) sorts the students of Hogwarts into the four houses Gryffindor, Ravenclaw, Hufflepuff, and Slytherin. In Dumbledore’s words, the people in your house were to be as close to you as your own family. Now that we have summarised how crucial but fun the sorting ceremony at Hogwarts is, let’s get talking about A Business Proposal.

A Business Proposal is a K-drama that has been stealing hearts every second. Shin Ha Ri seems to get wound up in trouble when she goes on a blind date in place of her rich best friend Jin Young Seo, since Jin Young Seo’s blind date turned out to be Kang Tae Mu, the CEO of the company Shin Ha Ri worked for. Mixed with the right amount of cliche and humor plus romance, A Business Proposal is becoming every person’s favorite K-drama at this place and time. A Business Proposal has a wide range of fun characters, which makes it even more fun guessing which houses they would have been sorted to if they ever studied at Hogwarts School of Witchcraft and Wizardry!

There is no better way to start off with A Business Proposal’s female protagonist Shin Ha Ri. Shin Ha Ri brightened our day by figuring out how to live as two people, one as her real self and the second as Shin Geum Hui. Ar first glance, we might see the Sorting hat placing her in Gryffindor for her braveness. When facing her boss, aka Kang Tae Mu, even after she found out, she was able to stand up for her and Kang Tae Mu’s relationship when his grandfather Kang Da Goo found out about them. We would not have been able to last in front of Kang Da Goo’s dangerous glares. 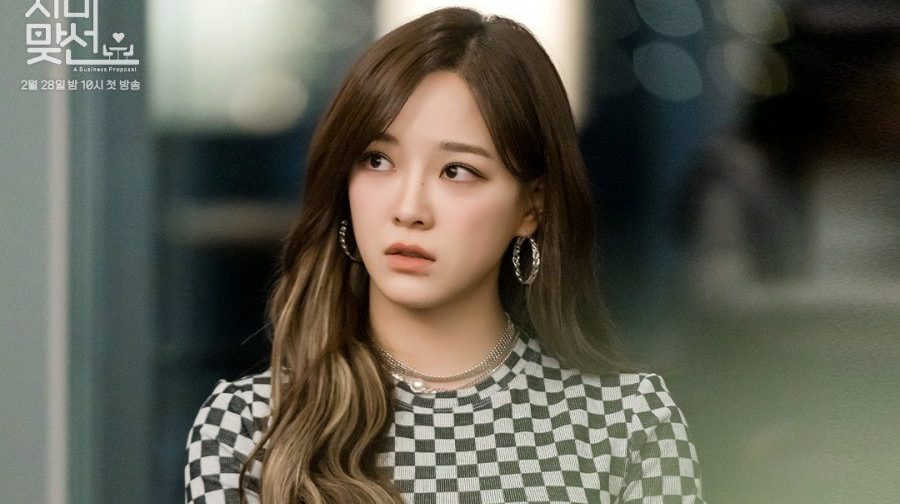 But we can see the sorting hat having a hard time choosing between Gryffindor and Hufflepuff for Shin Ha Ri since she goes out of her way to help people around her. We have not forgotten the adorable part where she tried helping Kang Tae Mu get rid of his fear of the rain.

Next up is our charismatic male lead Kang Tae Mu. From the beginning of the series, Kang Tae Mu has proven he is a true workaholic and wants his company to heights it has never reached before. He shows great leadership qualities and is an amazing human at the same time. Unlike other K-dramas where the CEO seems like they do not care about their company, Kang Tae Mu is a person who would have a hard time choosing between work and Shin Ha Ri herself. 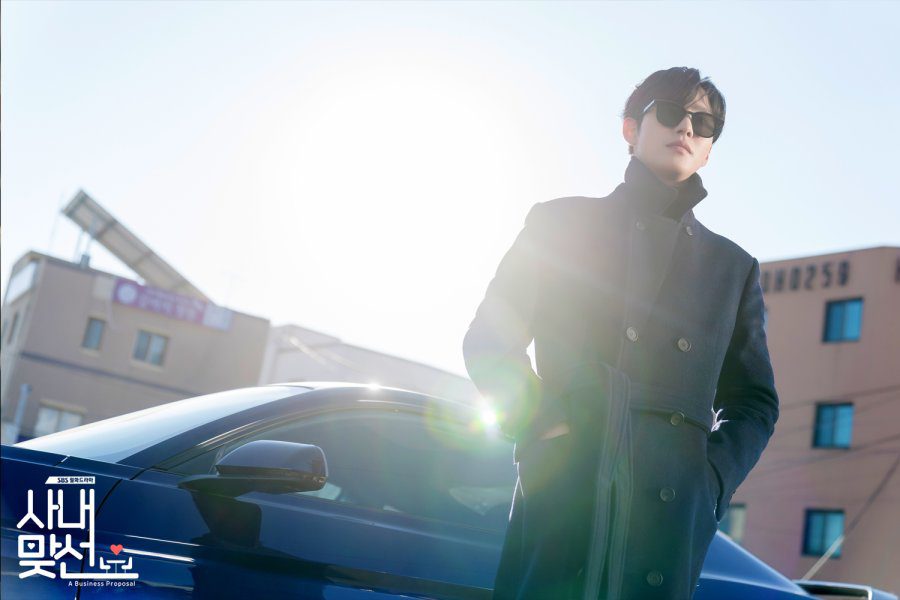 Although the sorting hat would consider putting him in Ravenclaw due to his knowledge, his ambition and leadership qualities seem to outweigh his knowledge. That is why we think that Kang Tae Mu would have been a Slytherin if he had attended Hogwarts.

Next up is Shin Ha Ri’s bestie, who wound her into trouble in the first place. Not angry here since the end result was not that bad. Jin Young Seo is introduced as Ha Ri’s best friend and as a rich chaebol who is also the daughter of Marine Group’s Chairman. Jin Young Seo, even though very stubborn, shows a lot of chivalry and determination for what she wants. Even when her father threatened to take her card from her if she moved out, she could not care a bit. 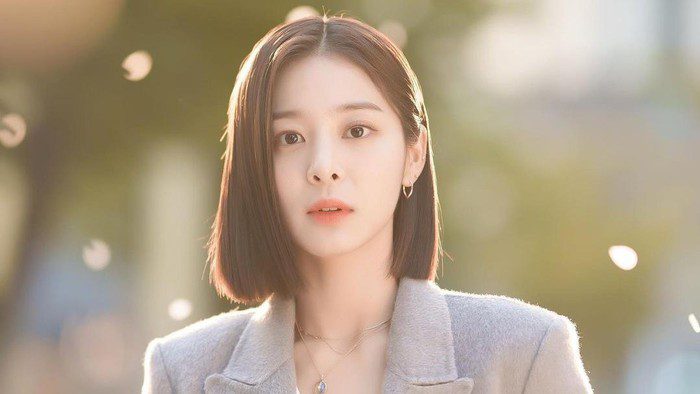 Moreover, she did not cower down in front of her father when he told Cha Sung Hoon to break up with her. She literally handed in her resignation letter and did not ever plead with her father to bring her back into his company. Instead, Jin Young Seo went along and opened a company of her own. Although, like Kang Tae Mu, we could have sorted her into Ravenclaw as making a whole new company by standing on your feet requires quite a lot of brain. What do you think?

Here we are, finally, on the heartthrob of the K-drama A Business Proposal Cha Sung Hoon, we bet you skipped the others to see his Hogwarts house first, and we don’t blame you. Cha Sung Hoon is no doubt the most popular A Business proposal character. It’s just his and his dimple’s world, and we are living in it. Cha Sung Hoon is the loyal secretary slash brother of Kang Tae Mu and is the caring and loving boyfriend of Jin Young Seo. To be honest, we have never ever come across such a sweet character. 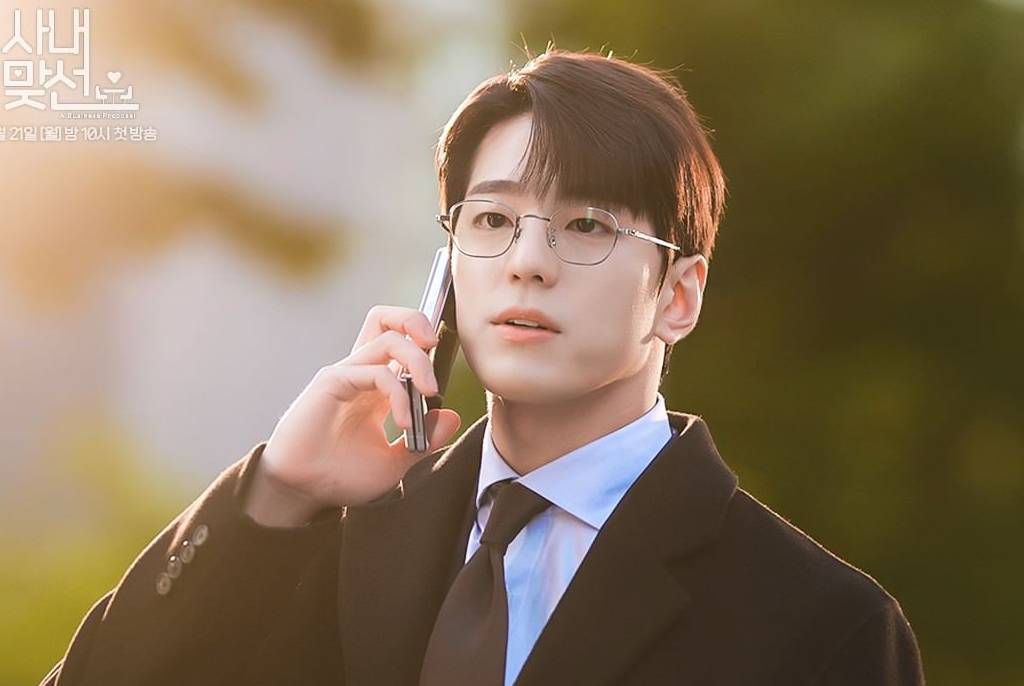 He and Kang Tae Mu were so close that people thought they were dating. Sung Hoon cared about Kang Tae Mu so much that his girlfriend Jin Young Seo would get jealous. Talking about Jin Young Seo, Sung Hoon was very patient with her. Anyone would have gotten annoyed by Jin Young Seo’s outbursts; that is why Cha sung Hoon is not anyone. Not to mention, he firmly denied breaking up with Young Seo when her father had ordered him to do so. All of these kind acts of his prove that Cha Sung Hoon would have been sorted into Hufflepuff without a doubt.

Lee Min Woo is the long-time crush of Shin Ha Ri. Moving his stupidity aside, many admire him as a very talented chef. Even though he is not that great in his love life, he knows cooking like the back of his hand. Not trying to paint Slytherin as a house of bad people, but Lee Min Woo was truly ambitious in the wrong way, i.e., he was selfish. Despite liking Shin Ha Ri all those years, he never decided to confess his feelings and just sat there while Yoo Ra and Ha Ri suffered. And when Ha Ri started dating Kang Tae Mu, he decided to jump in again and confess his feelings for Ha Ri, as if Ha Ri would care. All in all, Lee Min Woo would be a pretty bad egg from the house of Slytherin. 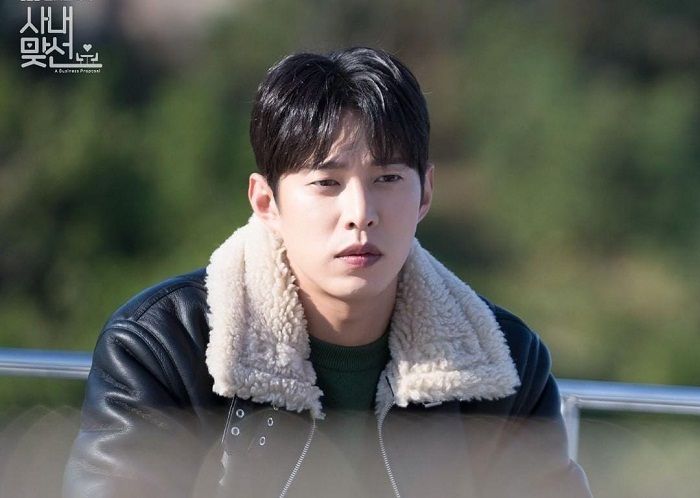 Ko Yoo Ra, aka maybe the most hated character of a Business Proposal. Yoo Ra is the jealous and totally immature girlfriend of Shin Has Ri’s long-time crush Lee Min Woo. She always felt like Shin Ha Ri tried to outshine her every time, and the fact that she found out that Shin Ha Ri too liked Min Woo did not make things better. Rather than being happy about Shin Ha Ri having a great and handsome boyfriend, she was angry that Ha Ri had a better boyfriend than hers. Yoo Ra took immaturity to another level by spreading false rumors about Shin Ha Ri, saying that she two-timed Min Woo and Kang Tae Mu and thus giving Ha Ri a real hard time wherever she went. 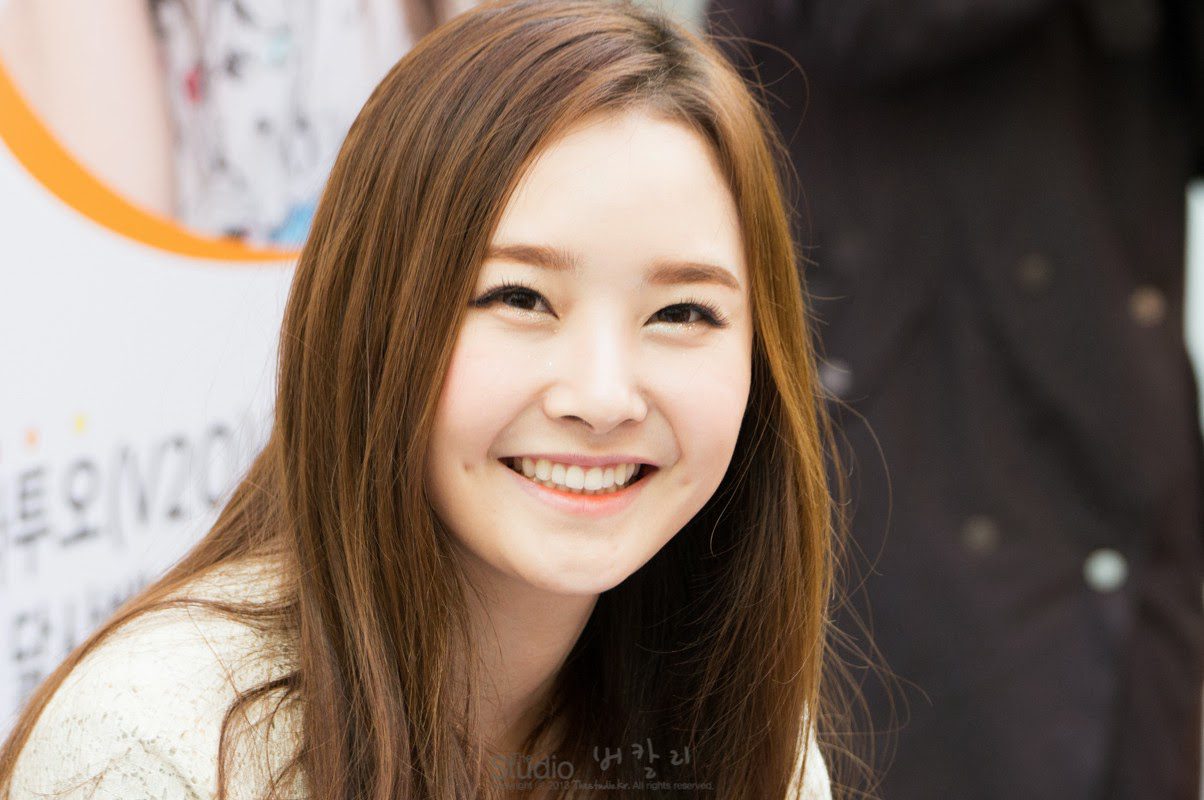 But what is the most outrageous thing about her is that she thinks of Min Woo just as an accessory. She herself told Ha Ri that she started dating Min Woo just because Ha Ri liked him. If we have no choice but to sort her into a Hogwarts house, it would be the bad side of Slytherin. Trust us, she and Pansy Parkinson would have become best friends. Additionally, A Business Proposal’s fans would rather like her to end in Azkaban with the dementors.

Finally, we will be sorting the happy pill of A Business Proposal Kang Da Goo into his Hogwarts house, aka the jolly old grandfather of Kang Tae Mu. Funnily, due to his joyful personality, many would compare him to one of the most beloved Harry Potter characters, Hagrid. No one can disagree that Kang Da Goo always wants things to go his way. To pursue his grandsons to hurry up and marry, he acts like he is severely sick and tells the doctor to make his grandsons worry so much about him and make them think he will die any second, just because he wants them to go on blind dates. 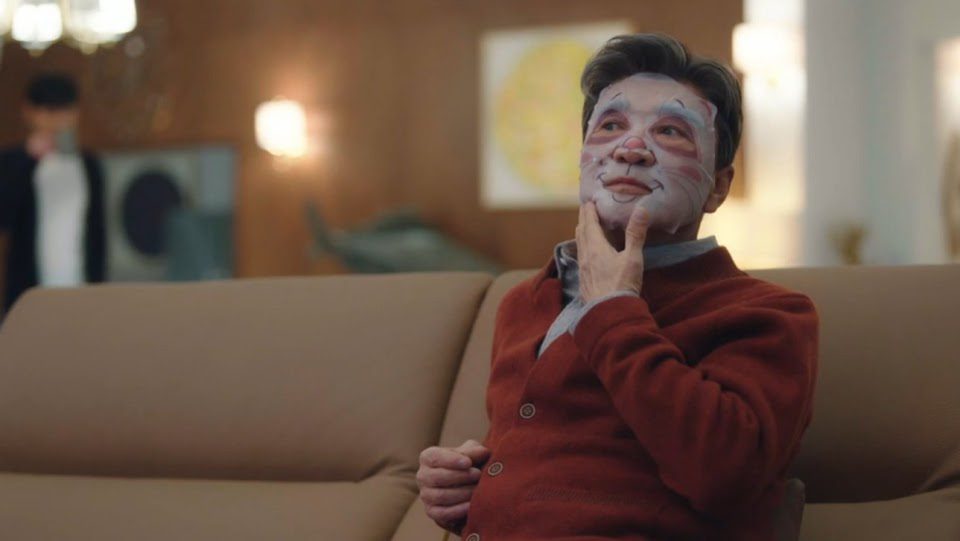 Now we all know what house comes into our minds when thinking of people who would do anything to get what they want. Yes, you are right. It is Slytherin. We could see where Kang Tae Mu got that ambitiousness in his blood.

If you are yet to watch A Business Proposal, you can do so on Netflix.

Also Read: Best Moments From A Business Proposal That Will Make You Believe In Love