The art of cosplaying is glittery and absolutely mesmerizing. Seeing our favorite characters brought to life is in itself a dream come true. However, it’s far from being easy. Cosplaying comes hand in hand with several months of hard work and planning. Despite this lengthy process, cosplaying remains an underrated talent. But despite the challenges that come along with it, several cosplayers have flourished and set new standards of cosplays. Thanks to our favorite cosplayers, it’s all that we can see, such refined live versions of our favorite 2-D characters.

Cosplaying takes a deep understanding of the character you are portraying in order to correctly represent that character on social media or in any other environment. Art forms like Makeup and needlework are essential in order to bring the character’s essence to life. In addition, what never fails to amuse us are the beautiful props that cosplayers prepare. This is how we discovered Akai, a man who shows a profound skill in prop building. We are especially taken aback by the accurate Chainsaw Man props that he has built. Amazed by his progress so far, we decided to invite him for an interview. Fortunately, he agreed to share a portion of his story with us at OtakuKart.

Akai is an Indian based cosplayer from Chennai. He is also a budding YouTuber. His profile at a glance speaks a lot about his love for Chainsaw Man and Berserk. To know more about the journey of Akai, scroll down below, and don’t forget to follow him on his socials if you haven’t already. 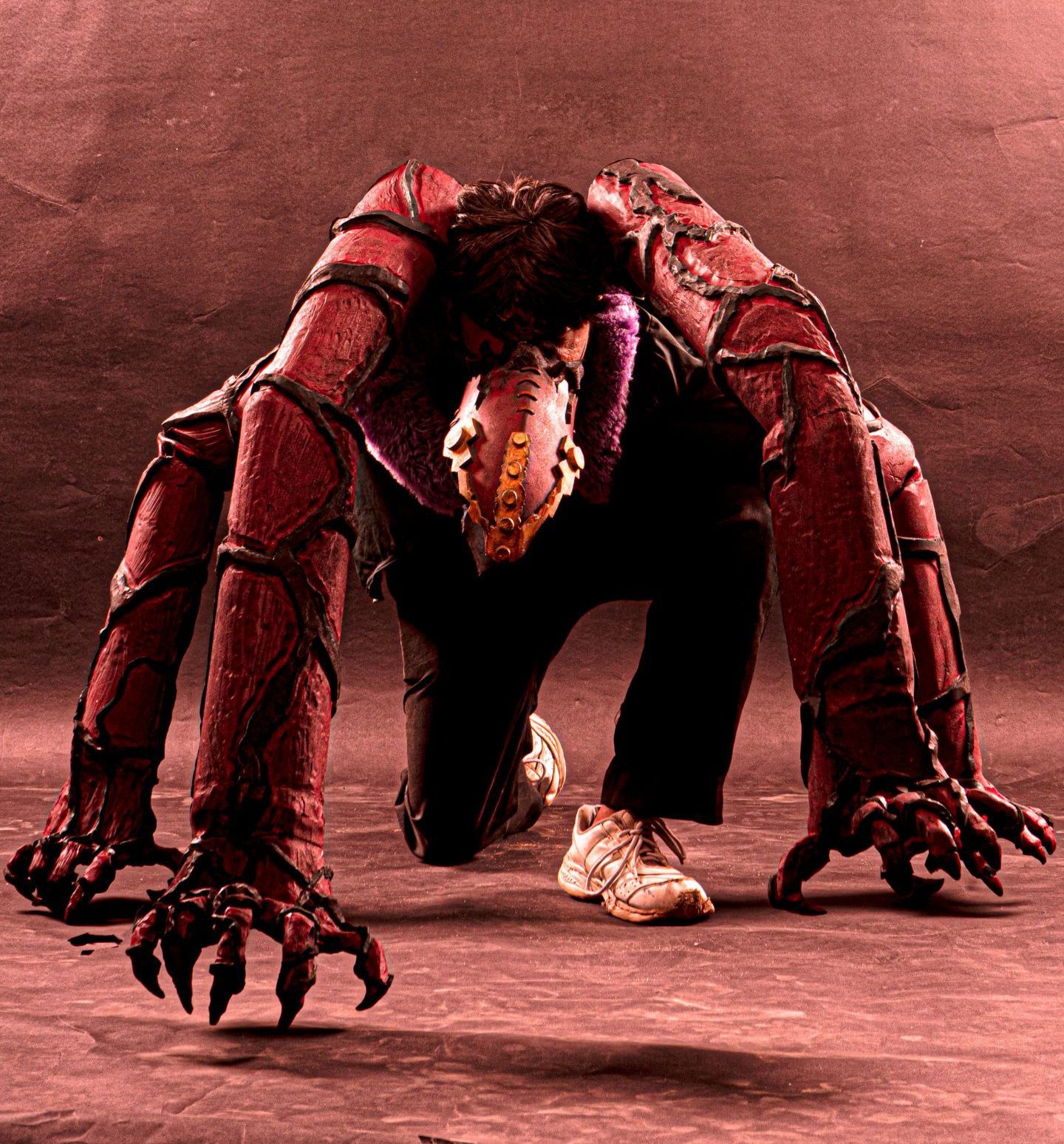 Hello Akai, Before we start the interview, why don’t you introduce yourself to our audience.

Akai: My name is Arvind, but I’m mostly called Cos or Akai. I work at Amazon as a 3D artist, and I’ve been cosplaying for roughly over two and half years now. I love cosplaying, Metal music, Playing Drums and Guitar, and love playing a good round of chess from time to time. I am also a slight fan of Seinen type of content, along with love for horror, thriller, and gore themes from all pop culture media. I mostly cosplay characters that fall under these genres and am a fan of the underdog and underrated characters for my cosplay. I prefer to make my cosplay as realistic as possible, sometimes deviating slightly from the initial design of the cosplay to make it my version adding my own flair to the cosplay.

Question: So Akai, jumping into the interview questions, why did you choose cosplaying? What sparked your interest in cosplay and your real motivation behind it?

Akai: My main reason for being a cosplayer is to present the characters I love in the best and most brilliant way possible and to show everyone why they’re such awesome characters, and to share how personally bonded with these characters I am especially since I have a habit of cosplaying underrated and more revered characters from most series. Cosplaying, going on stage, and performing as my favorite character is such a magical experience, and I love being on that stage so much that it’s one of the best feelings I can get in the world.

Question: Did you ever feel the characters you cosplaying were challenging?

Akai: Managing my time between my personal life, professional life, and my cosplay endeavors till I can achieve my goal of making cosplay my primary source of income is the most common challenge that I face every day. Being perceived as a bad person or misunderstood because of the characters that I cosplay, being told it’s useless to cosplay the characters that I cosplay, and often ridiculed because I never bother to cosplay the most popular characters because those characters often do not resonate with me personally.

Question: So previously, you said cosplaying is a magical experience. What do you think was the most unforgettable and precious moment for you till now as a cosplayer?

Akai: My performance as an overhaul for Nagpur Coscon 2019 would be my most unforgettable moment as a cosplayer because the way I could just be myself on stage and also have super fun with the cheering crowd behind my back was such a powerful and magical feeling that it’s still etched in my memory even now.

Question: Being to cons and getting recognized must be a really good feeling. But tell us something; what do you feel is your inspiration in the motivation behind being a cosplayer?

Akai: My inspiration to become a cosplayer is my love for the characters that I want to cosplay and to show that those characters are brilliant even though they’re not the first pick with most people out there in the community. I am Inspired by cosplayers like Purple Paw, Scytheskunkworks from India, and Trisrex, Kamui Cosplay, and Littlejem from other parts of the world, just to name a few of my favorite cosplayers.

Question: With all the conventions you have attended and the characters you have cosplayed, did you ever feel like the road you are in demands too much from you and felt like quitting?

Akai: Never have and hope to never give up on this because I could not imagine not being a cosplayer anymore after having experienced what it’s like being a Cosplayer.

Question: Among all the cosplays you have created to date, what do you think was the most fun in the making?

Akai: My Berserk Armor Guts cosplay was the most fun because of all the carvings and details that I had to do on the whole body and also because Guts is my all-time favorite character for which watching the character come alive before my eyes were the most fun I’ve ever had so far.

Question: Now that you have mentioned your fun cosplay, why not also talk about the cosplay you had the most challenging time creating?

Akai: Every cosplay I do is a new challenge; however, I’d have to say my Overhaul Nemoto Fusion cosplay was my hardest cosplay because it was my first time making giant hands and making it blend well with a normal human build. But, my hardest cosplay is my current ongoing Cosplay project which is the Full Demon Ancestral Chainsaw Man.

Question: We have talked a lot about your cosplay. Now tell us what are your favorite TV shows or anime you enjoy the most?

Akai: Berserk is my favorite, and Guts is my favorite character with whom I connect on a very personal level and can relate to due to some experiences I’ve had in my childhood.

Question: What other interests do you have besides cosplaying?

Question: So Akai, speaking of characters, do you have any specific type of characters you like to cosplay? If so, what is it about the character that piques your interest?

Akai: I have a habit of cosplaying underrated, gore-themed and characters that are perceived as scary by most because I usually resonate and like those characters and want to show my love for them by cosplaying them and showing them in the most brilliant and best way possible.

Question: Now that you have cosplayed as Chainsaw Man and Berserk characters, What other characters have you lined up for the future?

Akai: Chainsawman Ancestral Devil form ‘Chainsawman’ Manga is what I’m making currently and planning to finish within the month of November, and I’m planning to cosplay the horseman of apocalypse War from the game ‘Darksiders I,’ Carnage from the ‘Marvel universe,’ Gurren Lagann from the anime ‘Gurren Lagann’ in the near future over the next two years and I’m super excited about all of it. 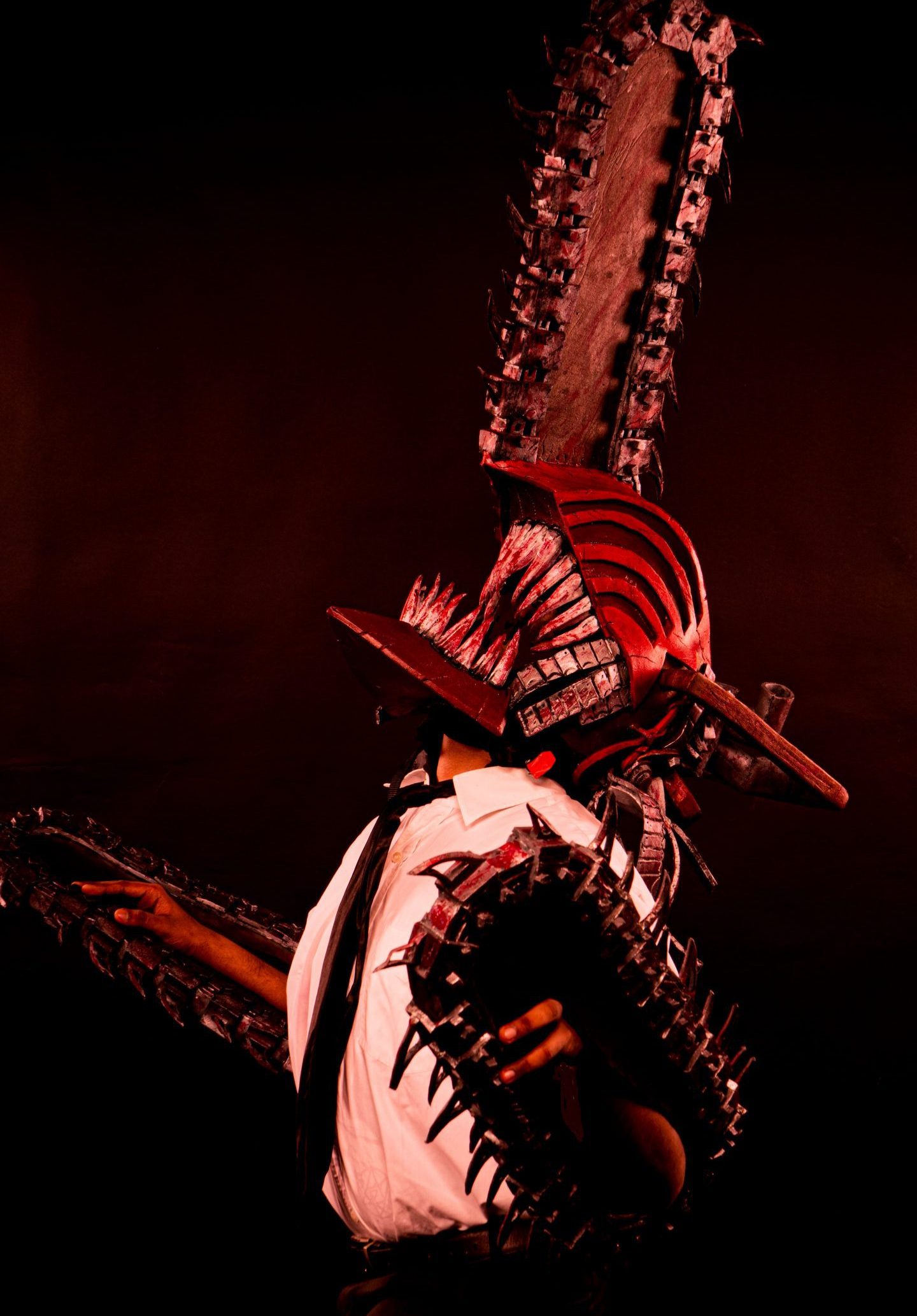 Question: We’d like to hear about some of your experiences at conventions. If you could attend any event, what would it be and why?

Akai: Yes, I’ve been to a couple of Cons, and my biggest Con would be Nagpur Coscon 2019 at Nagpur. My performance as overhaul from Nagpur Coscon 2019 would be my most unforgettable moment as a cosplayer because the way I could just be myself on stage and also have super fun with the cheering crowd behind my back was such a powerful and magical feeling that it’s still etched in my memory even now.

Question: Which component of cosplay is your favorite, and what makes you so invested in it?

Akai: The challenges and figuring out how to make every cosplay I decide upon and the whole process of making the character come alive right before my eyes.

Question: Your cosplays have gotten a lot of praise and attention. What advice would you give to the next generation of cosplayers, if you had the chance?

Akai: Don’t be afraid and don’t think you need to do huge and extravagant cosplay to be recognized; just do your best and love the entire cosplay journey and everything that it has to offer to you and have fun above all else doing any character you want irrespective of it being anyone or anything from any media.

Now that we have come to an end to this interview, please link your socials. We wish you all the best in your future endeavors.

Who is Craig Revel Horwood’s Partner? All About His Relationship

Tara Sutaria Boyfriend: Is The Tadap Actress Seeing Someone?

Tara Sutaria Boyfriend: Is The Tadap Actress Seeing Someone?

Will Rihito and Mikaido Exorcise Evil Spirit In Episode 10 of The Night Beyond the Tricornered Window?

The Night Beyond the Tricornered Window Episode 10 reveals Mikaido and Rihito trying to get rid of the Evil Spirit...

Another Kdrama is coming soon to your tv screens. After making you hate him in the 2021 hit Vincenzo, Ok-Taecyeon is coming...