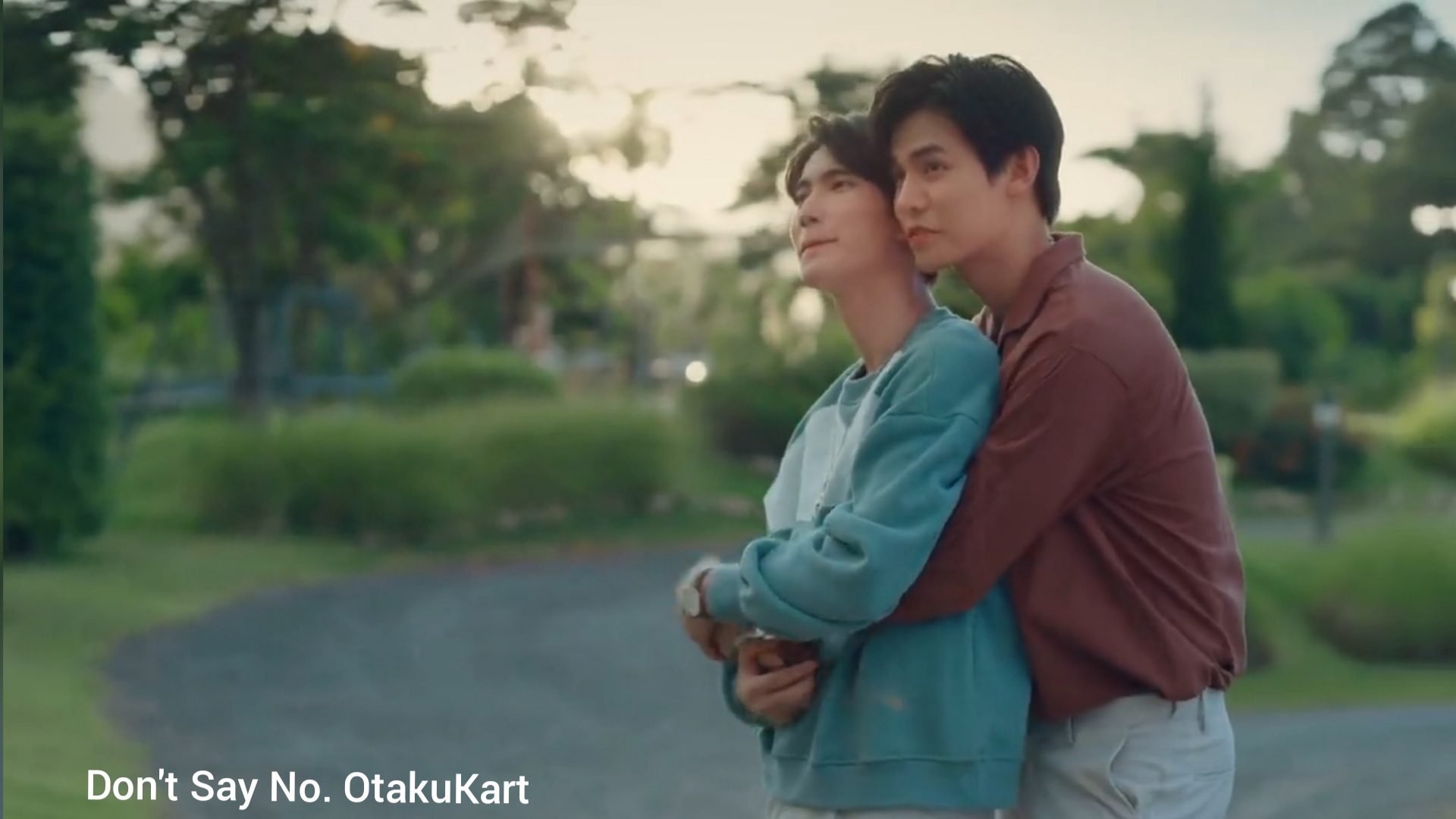 Thai drama Don’t Say No ended quite a while ago. The show completed on a bittersweet note after a journey of 12 episodes. It gained massive popularity, and naturally, so, fans do want a season 2. It is quite natural as the chemistry between the characters is extremely lovable. A spin-off of Thai series TharnType2: 7 Years Of Love, this drama is directed by Pique Passawut Sukbua. In this article, you will get to know about the updates regarding the possibility of a Season 2 and many more.

The story is about Leo and Fiat, who went from being best friends to each other’s lovers. They both knew they felt for each other from the very beginning of their childhood, however they never confessed. Leo and Fiat embark on a journey filled with love, friendship, laughter, sadness to find themselves and who they are to each other.

Unfortunately, no. Till now, no official confirmation has been made either by the director of the series or any of the cast members about the release of a second season. 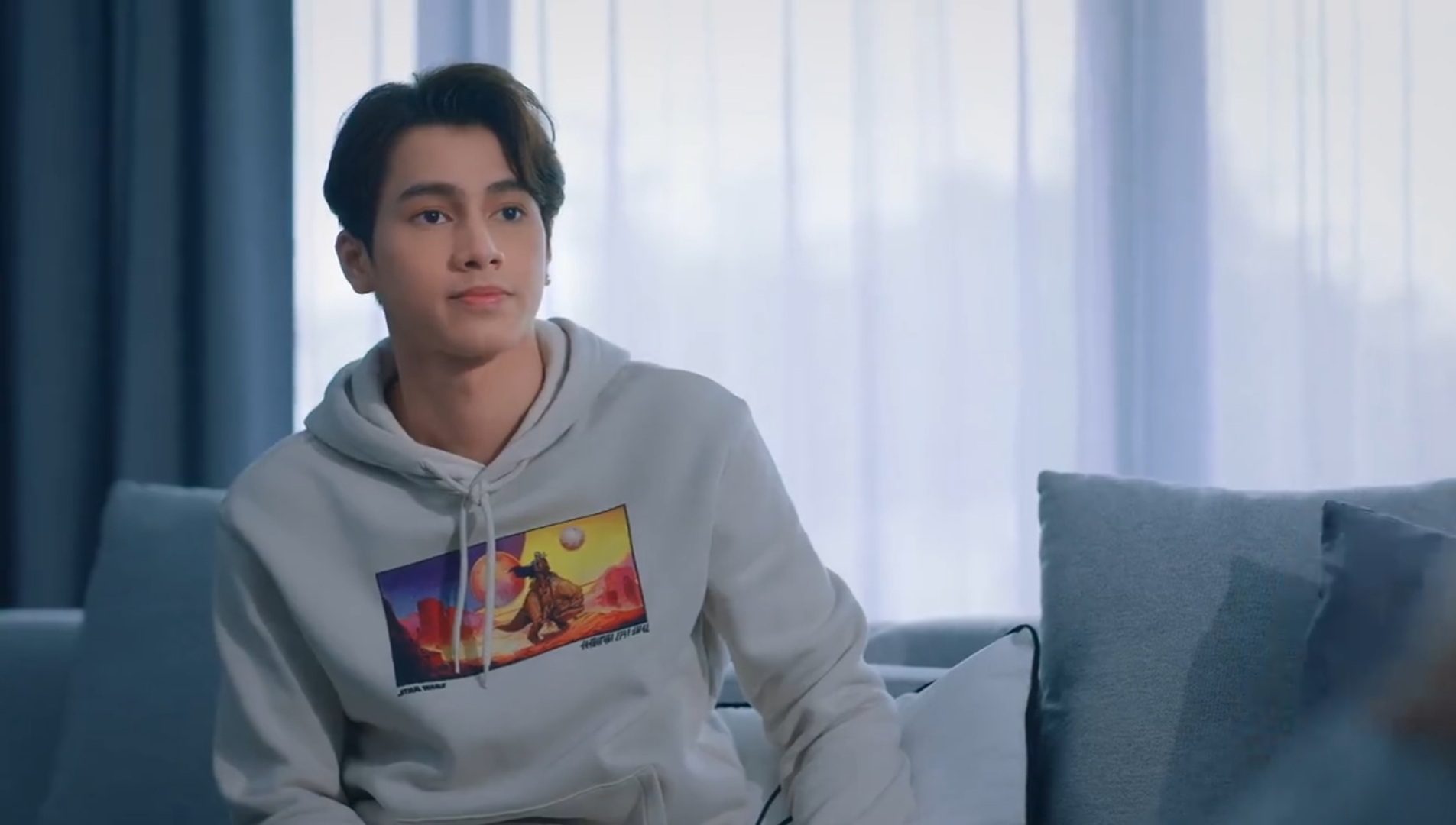 Leon in Don’t Say No

Is There a Chance For A Season 2?

Season 1 had a sweet ending, though not for all. While there was happiness that Fiat and Leo reconciled, our hearts partially broke seeing Leon and Pob drifting apart. If there is any scope of a season 2, then this can be a very compelling storyline. Leon and Pob had to call off their relationship as Pob wanted to work for less fortunate people, and that has always been his dream. So a gripping plot having their perspective will be enthralling to watch.

One thing is the behavior of people when Leo and Fiat finally acknowledged each other’s love. They were so happy for them. Every one of them knew that they had feelings for a long time; however, they couldn’t confess it. It was so natural and beautiful to watch, just how it should take it, and not only Fiat and Leo but every relationship the drama portrayed. It is imperative to say that till now, there are many stereotypes that surround gay love, which needs to be normalized. For nothing can be a greater act of love than a human loving another human.

Also Read: The Medium Ending Explained: What Happens At The End Of The Thai Horror?

Since there is no news regarding the making of season 2, naturally, no release date of the series has been announced yet. Don’t Say No season 1 got released on August 6, 2021, and continued upto 22nd October 2021. Only one episode used to release per week, which is Friday.

The drama used to air on its original network GMM One LINE TV with a duration of 50 to more than 60 minutes. A special 1hour 32 minutes special episode was telecasted on 6th November 2021. The special episode had the storyline, which started 3 years after Pob and Leon had their breakup. 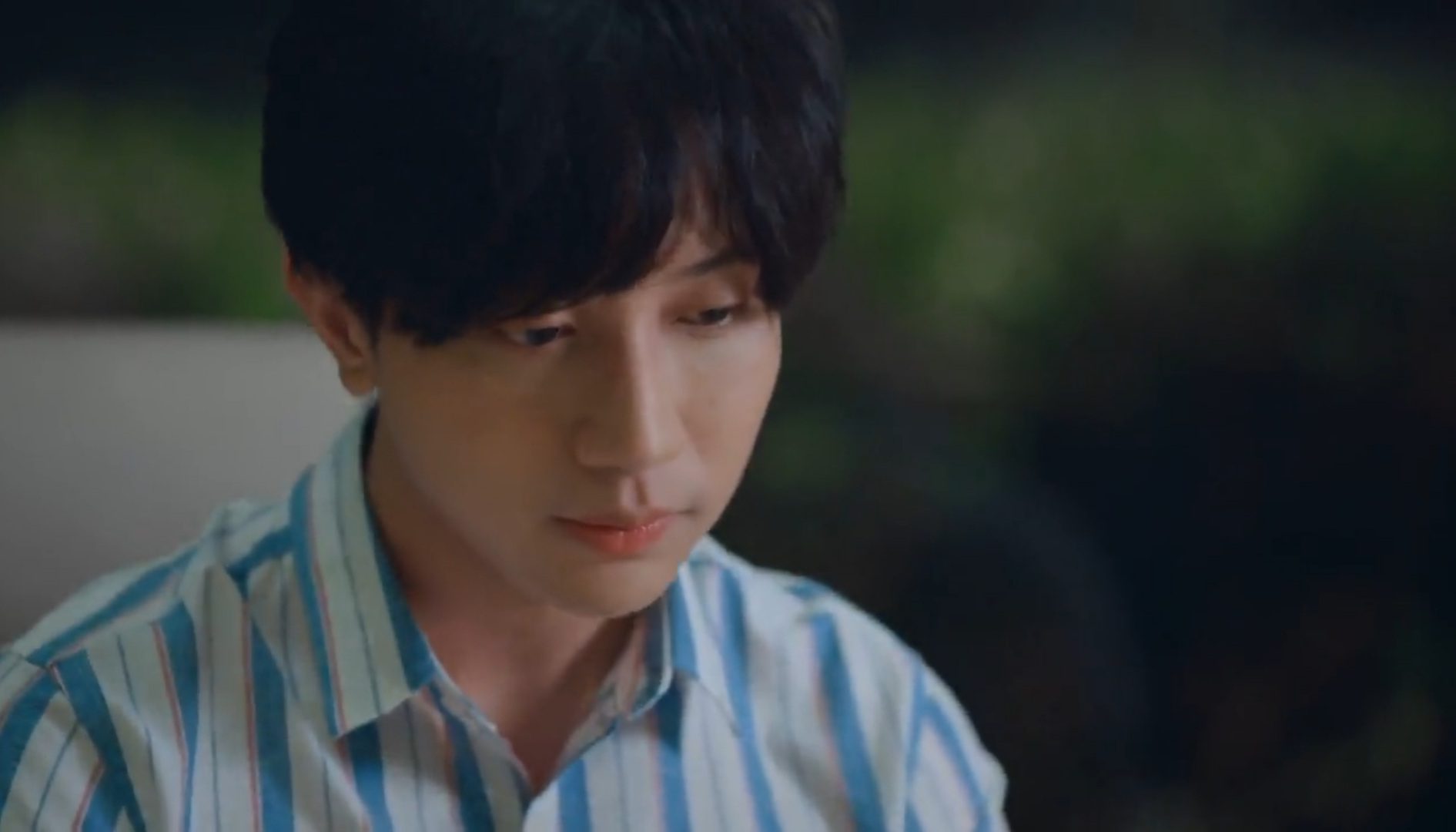 Pob engaged in thought about Leon.

Even if there is no official statement for a season 2, don’t forget to binge-watch the first season of Don’t Say No.

Since there is no official confirmation on Thai BL drama Don’t Say No season 2, BL drama fans can binge watch the first season no matter where they currently live. BL dramas are quite popular and are available on various streaming platforms.

Leo and Fiat are best of friends turned into lovers. They have loved each other throughout their lives but never got to confess. Though Fiat had been involved with many men previously, he never loved anyone the way he loved Leo. The first few episodes gave a sight of how there was a slight hesitation between them at first to behave like couples like what to say and so on. 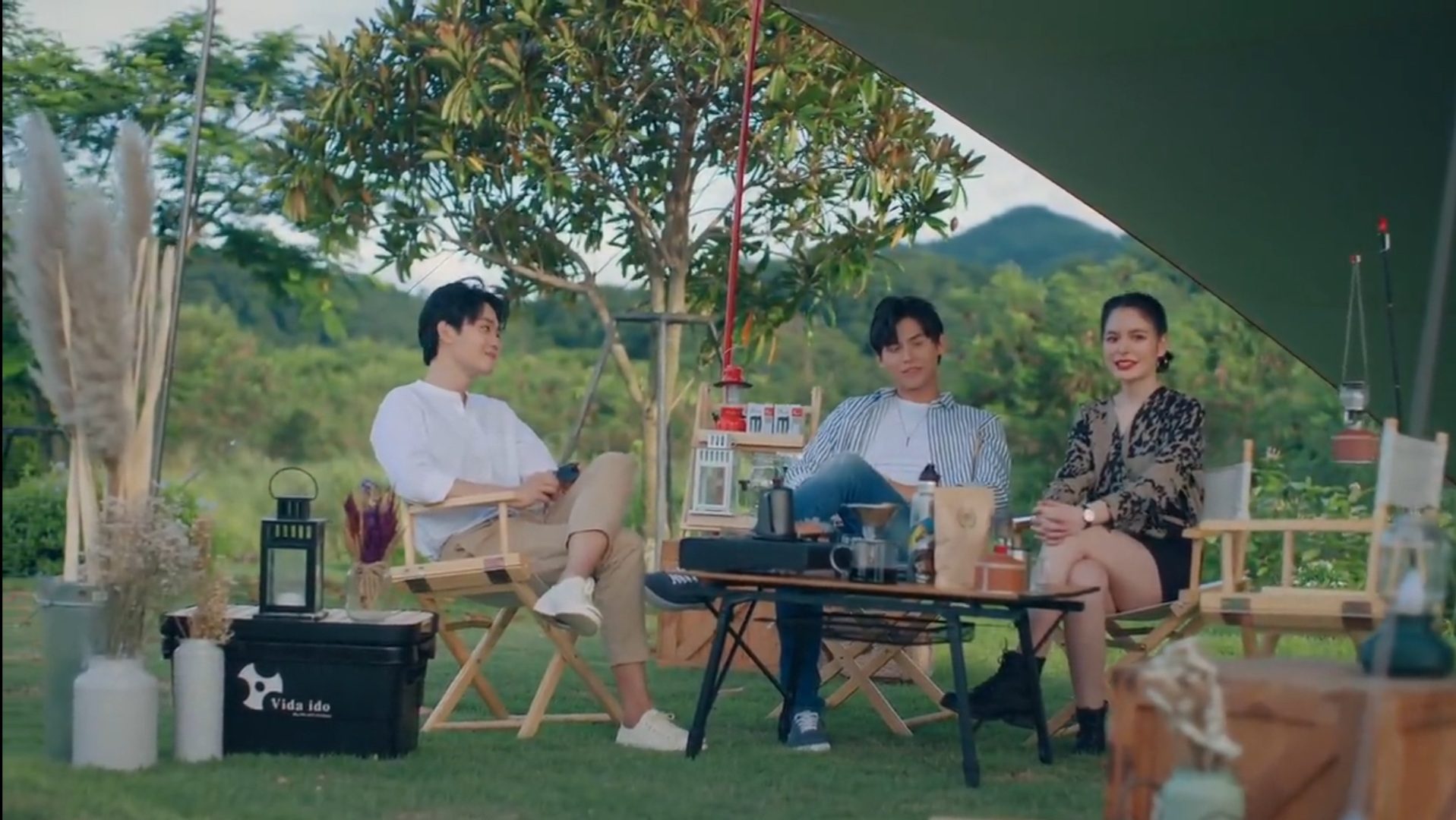 Leo, along with his and Fiat’s friends

Fiat Has A Past

Fiat had a past which he forbids to look at. When he was young, his mom always tried to imply that he was only allowed to love her and no one else. With time Fiat developed this feeling that maybe no one other than his mom loved him. Leo helped him to get out of this thought process by letting him know how much he means not only to him but also to their friends. However, this relationship was not easy as King, along with Punn, tried to sabotage it, however that didn’t happen.

On the other hand, Leon is Leo’s brother who developed feelings for Pob, who wants to work in an NGO to serve the underprivileged. Their chemistry was on point, but they had to end it as Pob had to travel abroad for his career, and he didn’t want to settle with Leon at that moment.

The series ended on a note where Leo and Fiat were together but left a pit in our hearts as we didn’t get the witness the Leon-Pob couple being together.

A special episode of Don’t Say No got released on 6th November 2021 Saturday. 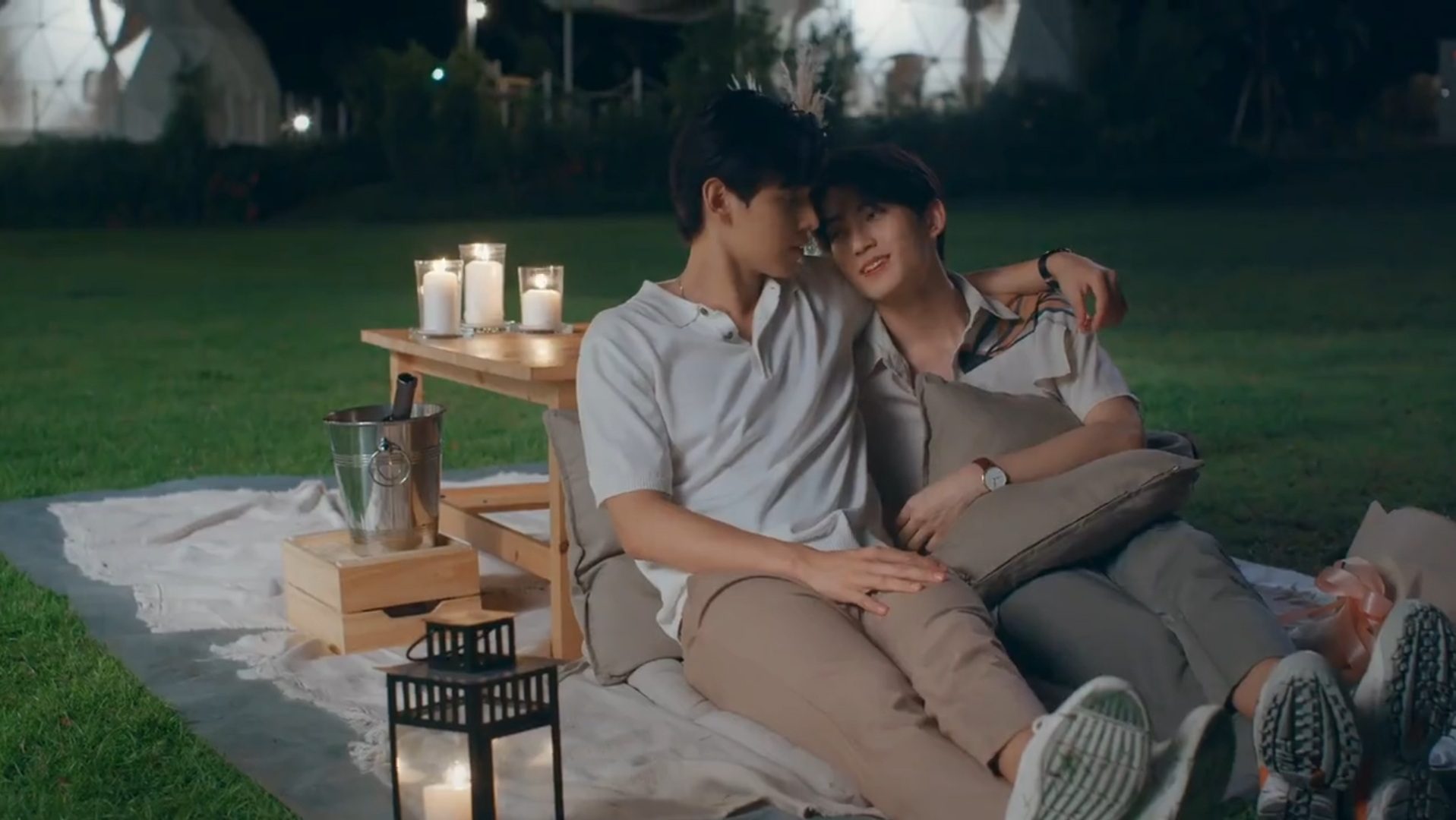 A still from Don’t Say No special episode

The story witnesses a three-year jump after Leon and Pob broke up. Leon is now a commercial prince who owns the commercial world. He has his own fanbase and is quite famous. After his shoot, he hurries to the airport to receive his to-be-diplomat brother, who is coming back to Thailand after two years. Leo, along with Fiat, finally lands in his hometown after being away for two years in England. Incidentally, Pob was also coming back from his work abroad. However, both of them were oblivious about it. At certain moments they were so close to each other but couldn’t meet. On one side, Pob misses Leon every single day, thinking that maybe he doesn’t remember his presence anymore, whereas Leon holds a slight ray of hope in his heart that one day he will meet Pob again. There were many instances where we thought that Now, it’s time they’re going to meet, however that doesn’t happen as somehow or the other they miss each other.

Coming back to Leo and Fiat, they were taken by their friends to spend some with them and also with each other. Leo was really happy to see Fiat smiling as, during their time abroad, time was really limited for them. Both spent quality time, and now, more than ever, they knew how to keep their love alive.

The special episode ended with a glimpse of behind the scenes where the cast shared their goofy moments and how they all shared a special bond. That is how the entire episode of 1 hour 32 minutes duration came to an end.

The Journey Of 12 Episodes Finally Comes To An End

Both First Chalongrat Novsamrong and Ja Phachara Suansri as Fiat and Leo were impeccable in their respective roles. The way they both portrayed Fiat and Leo was absolute bliss. However, we do think that a little bit more screen time or the story of Pob and Leon could have been shown more in this special episode. As we all know how Leo and Fiat are always there for each other, but the possibility of Leon and Pob again being together did make our hearts skip a beat. The beautiful journey of love, friendship, togetherness came to an end, hoping that maybe one day we may get another story in the form of Season 2.

Cast Of Don’t Say No

The main cast of the series are as follows-

First Chalongrat Novsamrong as Fiat – He is a Thai actor who was previously part of a boyband named Cute Chef. Though the band got disbanded in 2018, his popularity didn’t drop. He is an extremely popular face in the entertainment industry, and Don’t Say No was just another feather in his already shining cap. He is popular and is also well known for his stunning looks.

Ja Phachara Suansri as Leo – The 23-year-old Thai star got massive popularity through this series. Previously also he was well known for his projects. He was seen along with First Chalongrat Novsamrong in the BL series TharnType2: 7 Years Of Love. He is also known for his striking visuals.

Smart Chisanupong Paungmanee as Leon – He is a 20-year-old Thai actor. The famous role of Leon in Don’t Say No is portrayed by him.

James Pongsapak Rachaporn as Pob – James is a Thai actor who essayed the role of Pob. He portrayed the love interest of Leon. However, in the series, they both didn’t have a happy ending as he wanted to follow his career at that moment.