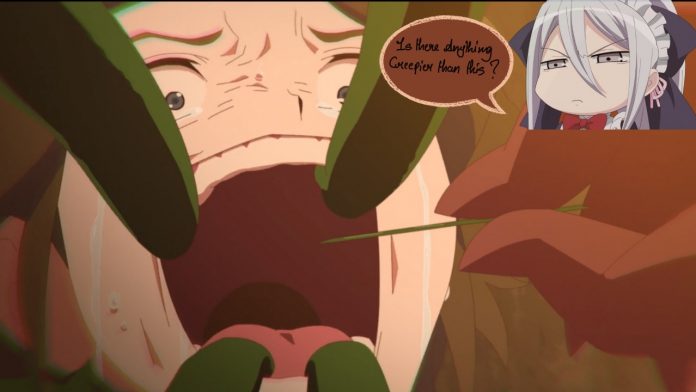 Did you also get shivers while watching Episode 24 of Digimon Ghost Game anime? If yes, then this is the right place for you to be. Let’s discuss the upcoming release date of Digimon Ghost Game Episode 25. Alongside we’ll also discuss some theories regarding the next Episode. There is no denying that Japan has the best media franchise, with variations covering manga, games, anime, merchandise, and more. And one of these famous Franchises is Digimon.

This Episode of Digimon Ghost Game was named “Twisted Love,” and it started with a man suddenly getting attacked by a plant-based hologram ghost. And later, the same ghost attacks multiple people. The only common link between these attacks is Yuto and his plants. As he runs a plant shop and every encounter he makes with someone, that same person gets attacked, including Hiro, when he visited Yuto as per his request.

Yuto then asked him for advice regarding this strange activity. He requests him to take the matter to Ruri and investigate it. Later, when returning home, Hiro gets attacked by the same ghost but is saved when Gammamon comes to rescue him. Witnessing this attack, he decides to investigate it seriously by uniting with team Lirurin to solve the case.

When Yuto tries to learn about the holograms, he also introduces his android robot, GW-1. Seriously from the first look, that robot looked creepy and repugnant. And contrast to that, it was the robot that was behind the attacks, as revealed later in the Episode. Apparently, Yuta’s love for his plants turned the ghost towards his robot. He just wants Yuto to himself and will harm anyone if they try to interfere or talk to him. After a fierce battle with Gammamon, Angoramon, and Jellymon, the GW-1 tried to turn itself into a human but failed and eventually died. Well, this Episode had a truly poetic end. True love can make one’s mind twisted.

What Will Happen In Digimon Ghost Game Episode 25?

Digimon Ghost Game anime Episode 24 ended with after-credits rolling, with The Ghost Navigator Himself making an appearance. The Ghost navigation is played by japan’s known actor and director Naoto Takenaka. The next Episode will be named “A Strange World,” where the mystery surrounding an Invisible or another strange ghost will come to light. Only this time it will be done differently than in other episodes. Because Naoto Takenaka himself announced that he would guide us through the strange phenomenon in the next Episode. Let’s wait to see if this will be an invisible ghost or someone from Hiro’s past.

How Many Episodes of Digimon Ghost Game Anime Will Be There In Total?

Digimon Ghost game anime has been airing for around seven months. With a total of 24 episodes aired to date, fans are wondering how many episodes will be there in total. Digimon anime series has been rebooted many times. In total, there are more than 8 Digimon anime series. With almost 400+ Episodes totaling them. On average, every Digimon anime adaptation was aired for more or less around 50-80 Episodes. So if the studio follows that formula, the anime should air 7-8 months more, probably till Winter 2023.

Also, Read – Anime Characters Who Were Forced To Be Evil

The anime first premiered on Fuji TV on 3 October 2021, and ever since the anime has premiered its episodes weekly.

You can watch Digimon Ghost Game Episode 25 on Crunchyroll and VRV.