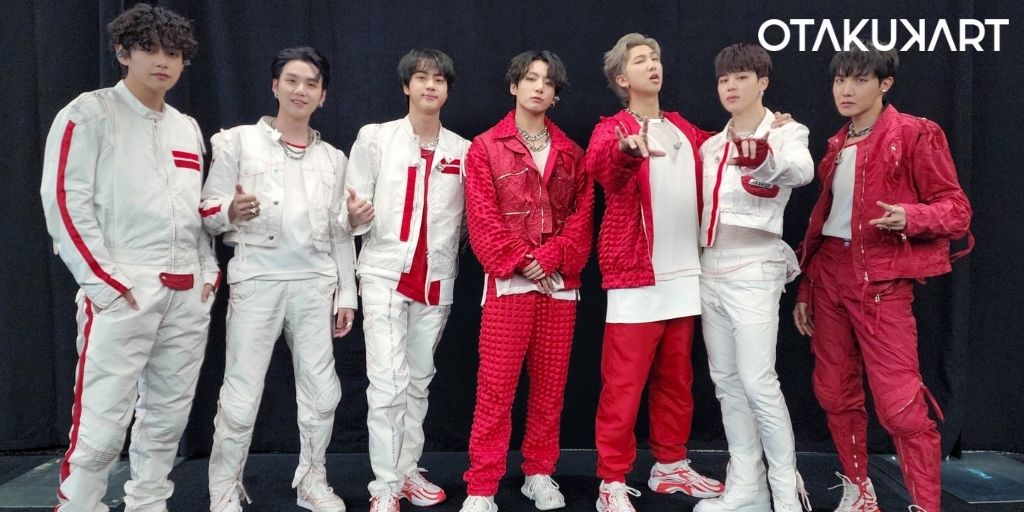 BTS concerts aren’t like your regular concerts. They are a grand level place of outing where not only fans but also great artists swarm to. BTS always make sure to attend their favorite artist’s concert if they are present there at the moment. Similarly, a lot of celebs are BTS fans and some are even good friends with them. They don’t take long to take their Army bombs out and attend BTS’s concerts to cheer up on them. While being in Las Vegas for their Permission to Dance tour, they themselves went ahead and met many artists like the legendary Lady Gaga. Many celebrities attended BTS’s PTD concert in Las Vegas and we stan these supportive artists.

Earlier, during their Permission to Dance at LA, celebrities, and friends like Anderson Paak, Conan Gray, and collaborators Halsey, Megan Thee Stallion, and Chris Martin of Coldplay was in attendance. With their latest tour at Las Vegas coming to an end, we witnessed a group of celebs who flocked to the concert. Thanks to Instagram and Twitter, it’s not difficult to find out who was there since they have posted plenty of stories and posts. From singers to influencers, here is a list of celebrities that attended BTS’s Permission to Dance concert in Las Vegas.

The English actor and comedian came to the concert with his daughter and wife. It has been clear from some previous instances that The Shaun of the Dead star is a big-time fan of the group. He said that he and his daughter bond over BTS. Talk about being a cool dad! The actor had earlier posted a story claiming that he would be attending the concert, and he did attend it. Not just this, he went backstage and clicked a picture with the septet, along with his wife and daughter. 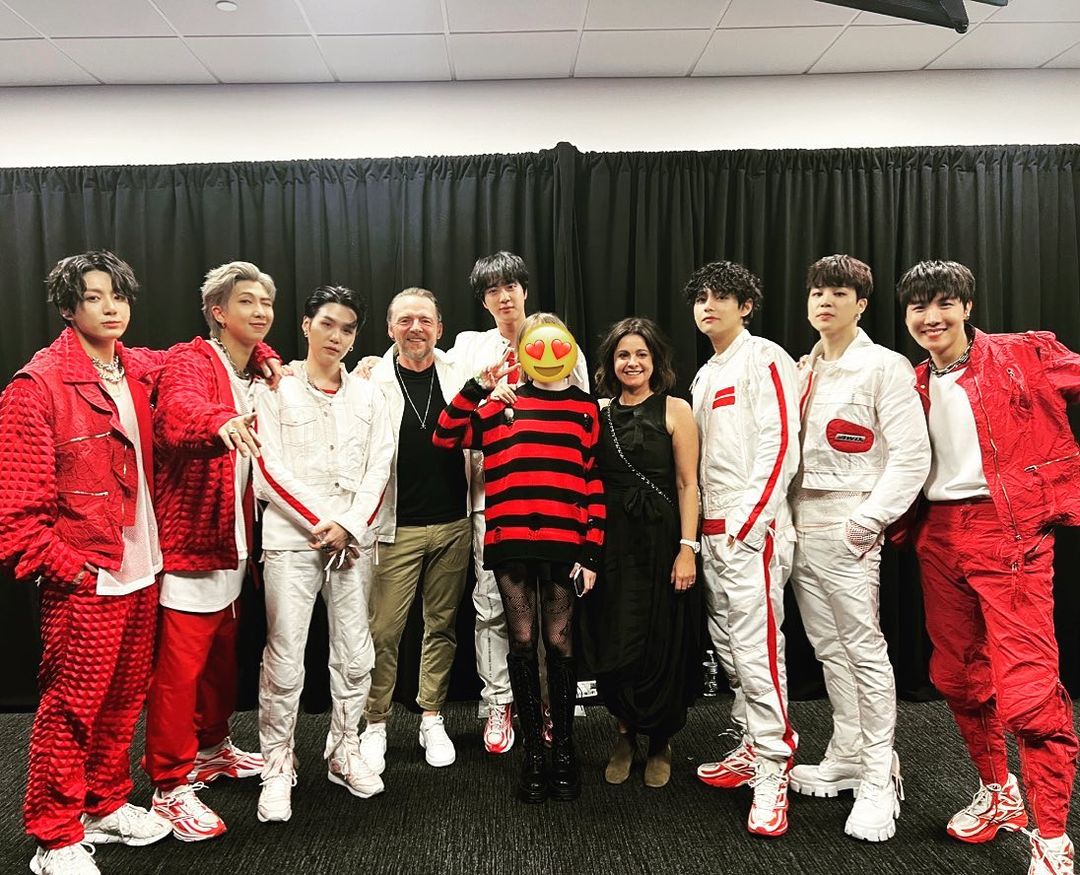 The American DJ and music programmer also came to see BTS in their PTD concert. Steve Aoki and BTS’s friendship goes back to their Love Yourself album era. Aoki has previously collaborated with BTS on their songs ‘Mic Drop’ and ‘Waste it on Me’. Since then, BTS and Aoki have been pretty close. They constantly hype each other up and have a very respectful mutual relationship. He even posted a vlog on his YouTube channel describing his experience of attending the concert. 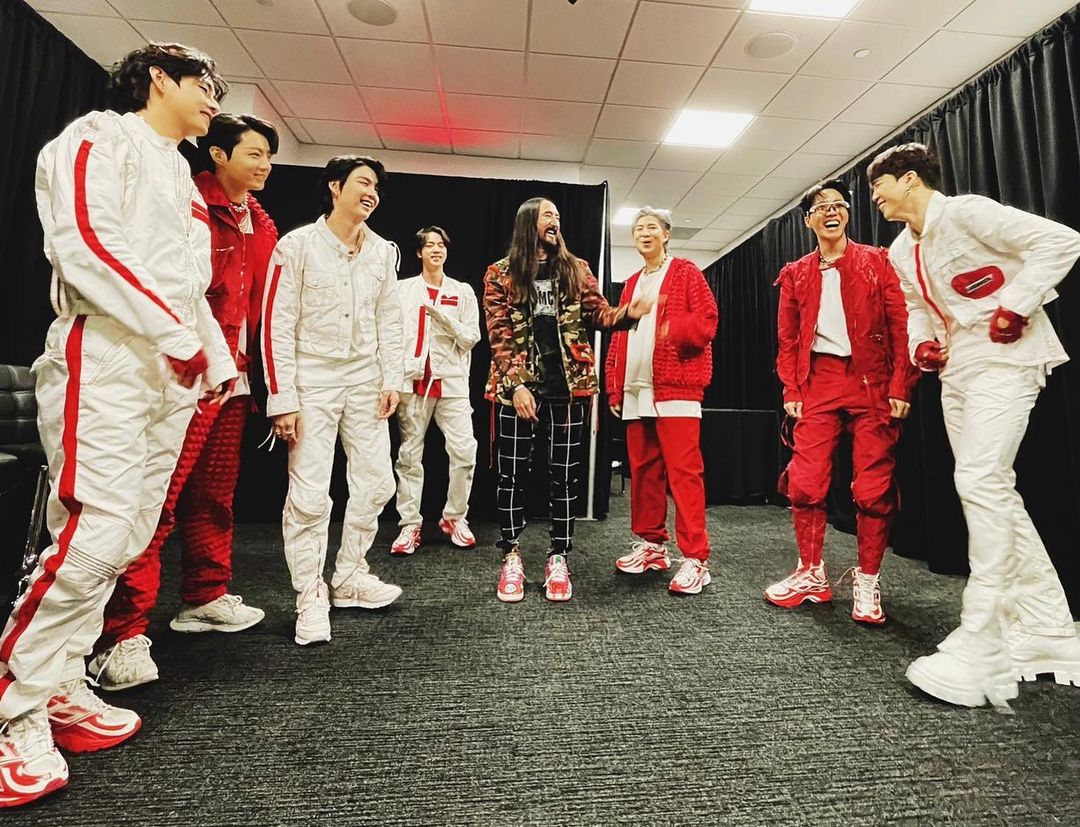 The former U-Kiss member Kevin Woo came to the concert along with his sister. He posted quite a lot of stories and pictures from the concert on his Instagram handle. He is known as a BTS Army for quite a long time now, as he has on previous occasions talked about BTS and their music. The American singer-songwriter and actor seemed to have a great time at the concert. After all, their concerts are deemed as one of the best places to be on earth. 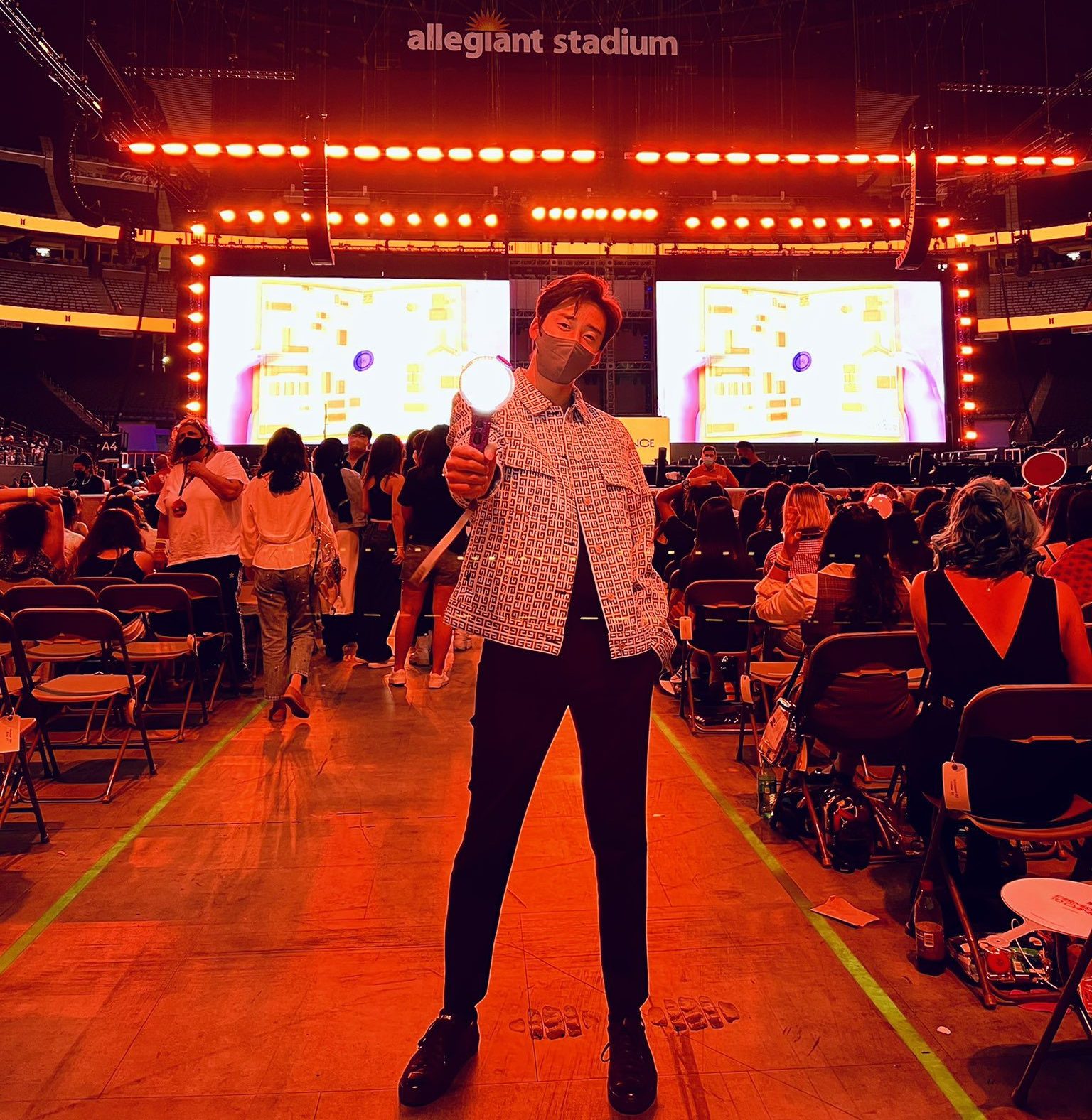 We all know the fun interviewer Liam McEwan who has interviewed BTS on a couple of occasions over the last 3-4 years. Armys love his non-judgemental attitude and the respect he gives to BTS every time he interviews them. Let me tell you how important it is to be in the good books of Armys. Liam has proved himself as a true stan who just doesn’t interview BTS as a part of his job, but is also a genuine big supporter of the boys.

He even visited the BTS pop-up store in Vegas. 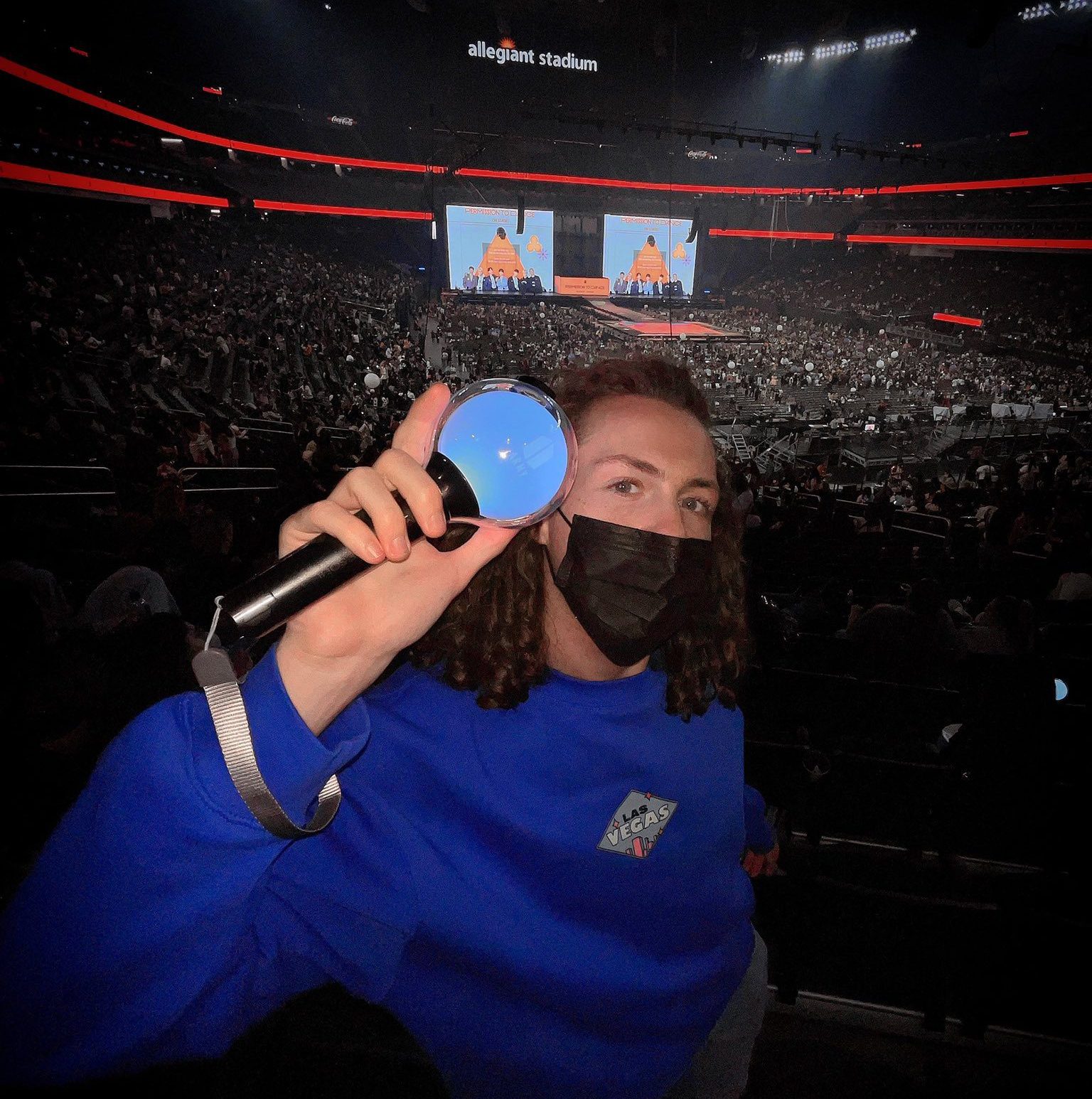 When J-Hope went to Lady Gaga’s concert he came back with some new friends. Michael is the musical conductor of Gaga and after J-Hope he only had good things to say about the rapper. Hobi even posted a picture with him and Lady Gaga on his Instagram. Michael and one more member from Gaga’s crew had earlier talked about being at the concert. And they did attend it. Michael shared live updates from the concert. Drummer Donald Barrett also met J-Hope at Gaga’s concert and even attended the concert with his wife and daughter the next day. 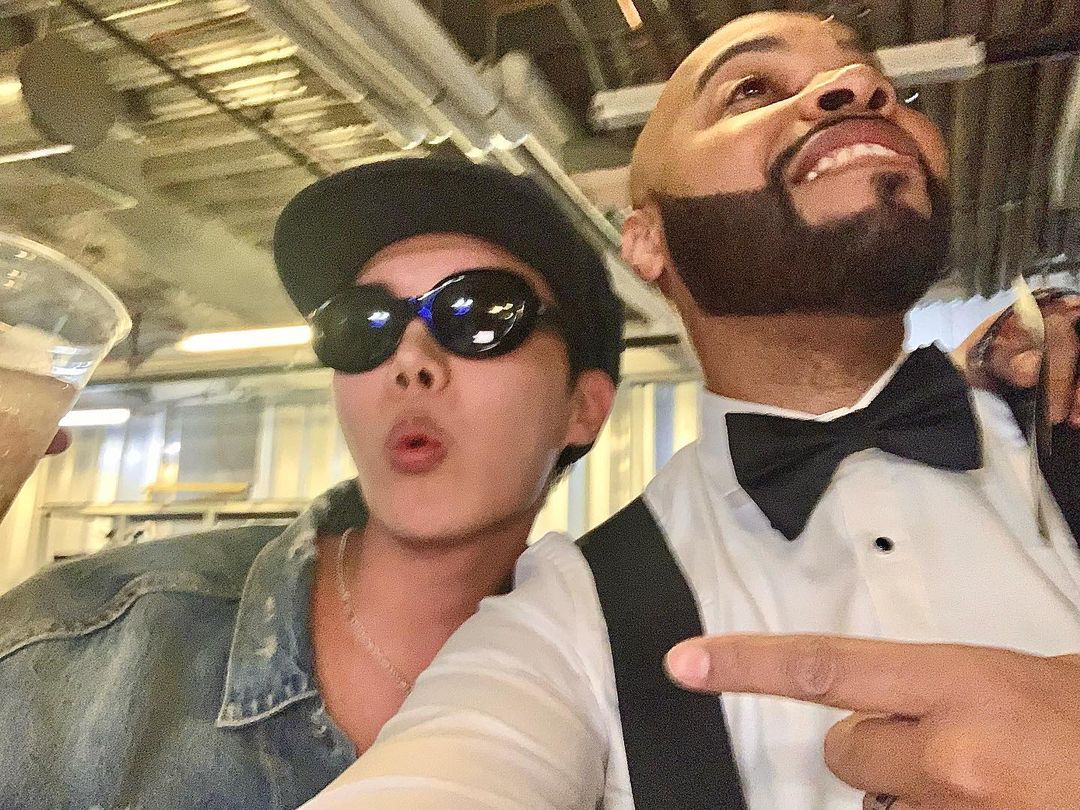 Also Read: BTS’ New Album ‘We Are Bulletproof’ – What To Expect?