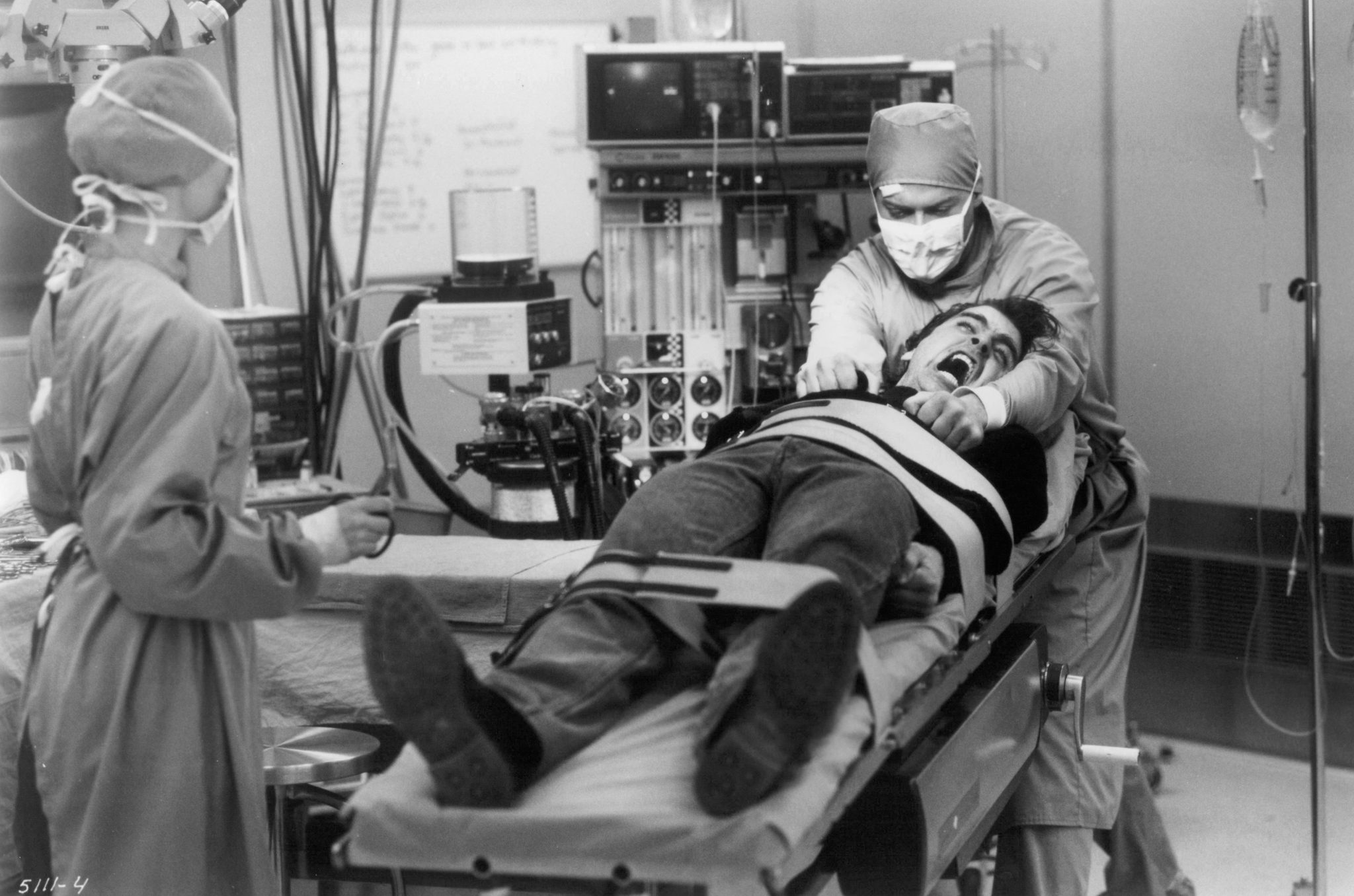 Body Parts is a 1991 Sci-fi horror movie starring ‘Lost’ and ‘The Marshall fame Jeff Fahey. The title encapsulates what the movie is about. It is a gore and grotesque body horror movie but with a creative storyline. Along with that, Jeff Fahey’s acting chops made the movie stand out. Loosely based on the novel Choice Cuts by French writing duo Boileau-Narcejac. Even though it’s based on a book by French writers, the filming of Body Parts happened in Toronto, Canada. An inevitable accident costs the hero his arm. But it is soon enough replaced by another man’s arm and things seem fine. Until he finds out something.

Don’t judge a book by its cover! The title and the images may throw you off but the overall movie is not too bad. It is written and directed by The Hitcher’s writer, Eric Red. Apart from Jeff Fahey, ‘All My Children’ fame Kim Delaney also stars opposite him.

A criminal psychologist, Bill gets into an unforeseen accident and loses one of his arms. However, the passionate Dr. Agatha Webb fixes another arm replacing the amputated one. Bill experiences scary nightmares and flashbacks, only to find out the arm belongs to a serial killer. On one hand, Agatha doesn’t want to deter her successful experiment and refuses to help. And on the other, the other two who get the same body parts, aren’t of much support either. Later, the serial killer although amputated is still found to be alive. A showdown kills the serial killer’s body for good and the movie ends with Bill having a new arm but a normal one this time. 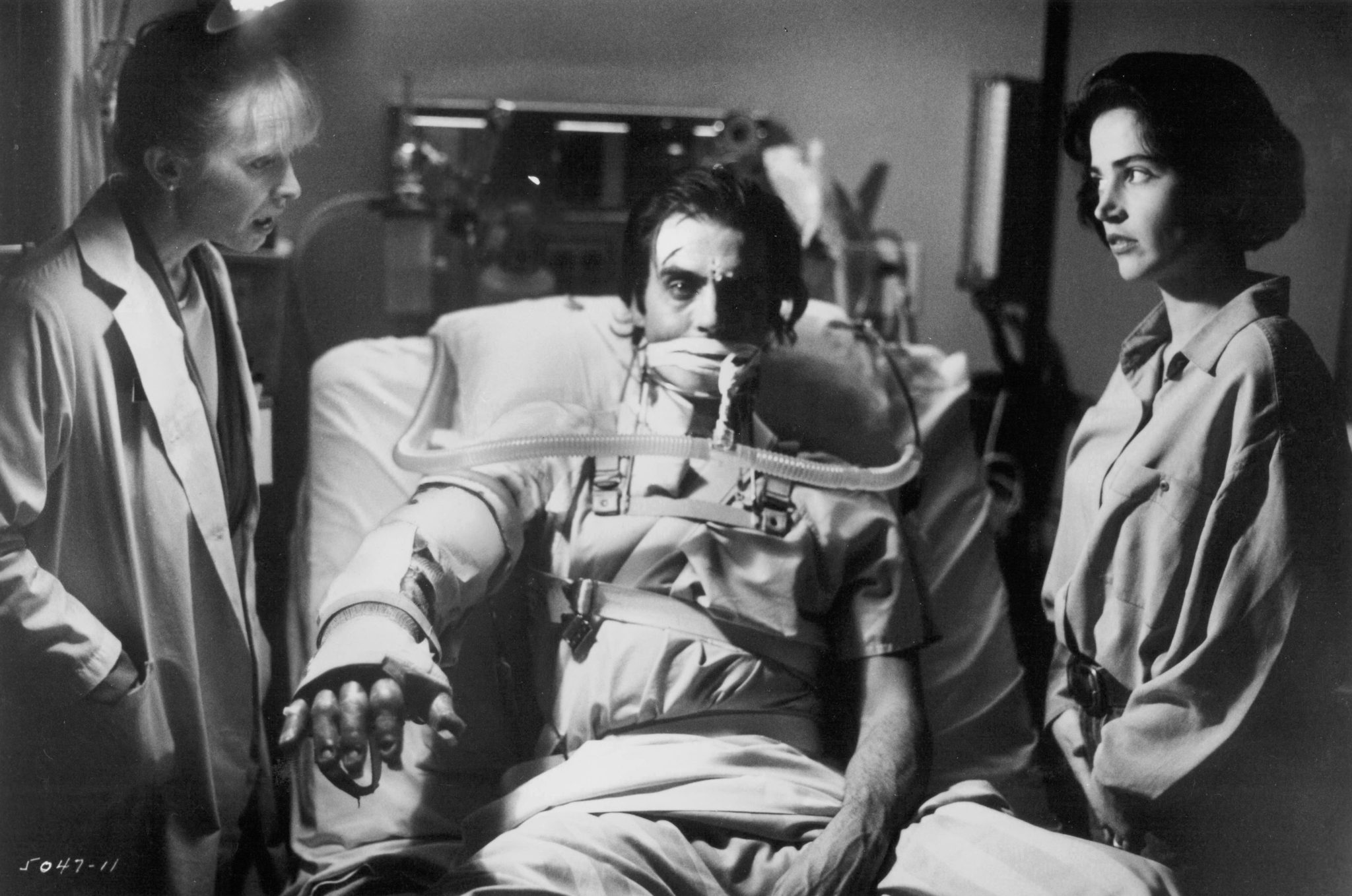 This movie has mixed reviews in terms of its apogée but it was still one of the most memorable 90s horrors. Since it’s a Sci-fi, it has creative liberty. However, a lot of critiques were against the impractical storyline. One critique even said that Body Parts have all the parts except for the brain. So, it is a controversial film! But if you love a good mindless gothic horror for the thrill of it, give ‘Body Parts’ a try.

Body Parts is a 1991 film and the production began in December 1990. The shooting for this movie happened in Toronto, Ontario, Canada. After shooting for three months, the filming finally concluded in February 1991. The theatrical release of Body Parts happened on 2nd August 1991 in more than 1000 theatres.

The filming of Body Parts in the winters of Canada provided the required gloomy background to the film. Well, the gothic and horror genres might be fun to watch but it’s harder to portray. Body Parts is a great movie for that time, apart from acting, the postproduction is also remarkable for its time.

How and Where to Watch This Movie

Body Parts was released on Home Video post the theatrical release in February 1992. In 2014 a DVD version of the movie was released followed by a Blue-ray released in 2020. The movie is also available online for rent on platforms like Apple TV, Amazon Prime Video, Vudu, and Google Play. You can rent this movie on Amazon Prime for $3.99 or you can also purchase it for $12.99. Apple TV also offers this movie for rent for $3.99 and $9.99 for purchasing it.

Even the American digital video store, Vudu offers ‘Body Parts’ for rent for a reasonable price, for rent $2.99 and $9.99 for purchasing. Although this movie is available online, it is not available worldwide. Viewers from America and Canada can watch it online but it’s not yet available in India.

Hope you enjoyed reading the article!

Also Read: Where is ‘Butch Cassidy and The Sundance Kid’ Filmed? See Where The Show Takes Us