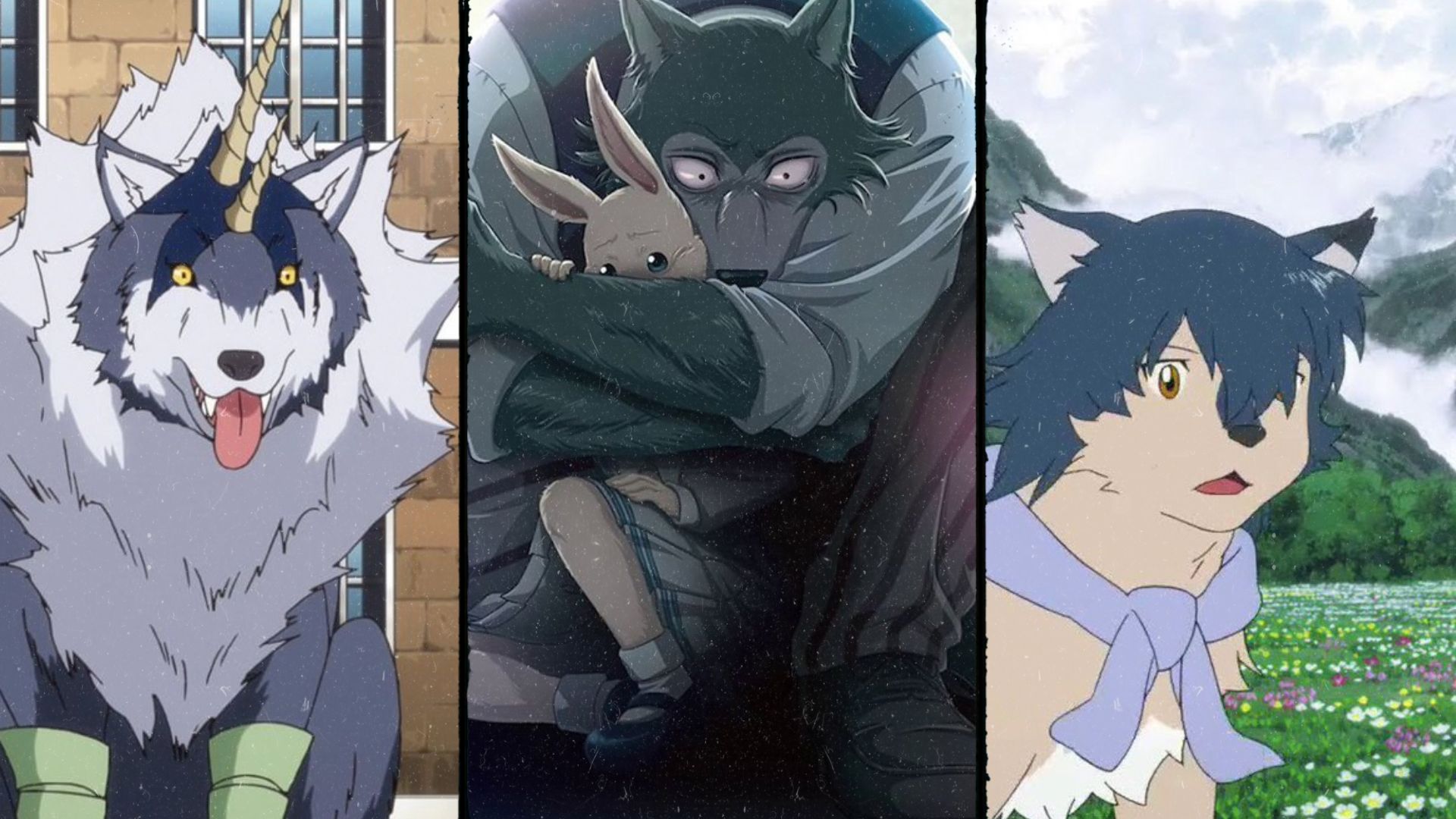 Furry friends are always fun to watch, so these are the best wolf characters in anime and everything you need to know about them! From anthropomorphic wolves to wolves who understand humans to complete wild wolves. There is a specific use of wolves in anime when creating a rugged character.

Animals have always been used in anime shows as supporting characters, and it’s always nice to see a fluffy companion along with the main protagonist. Wolves are one of the many ferocious yet elegant canine beings used in anime shows to bring more life and plot to the story. Many of these characters are well-loved even more than their human counterparts.

The plot of Wolf Children revolves around two children who are half-wolves, named Ame and Yuki, respectively. They move to the countryside with their mom after they lose their father and have adventures in the school that is situated in the woods.

When Ame was a child, he was lonely and did not participate in class, preferring to sit in the back and not listen. He frequently skipped class to be at home or see his mother at the nature preserve. He was bullied, but his sister stepped in to protect him and chased the bullies away. His wolf instincts began to emerge as he grew older, making him more daring and engaging in “wolf-like” behavior such as chasing prey or running around in the woods alone.

Unfortunately, in the end, the two siblings took very different courses in life. Yuki chose to stay in the human world, whereas Ame chose to go. Their choices demonstrate how much they’ve changed as they’ve grown up. As previously stated, Ame wished to be simply a human as he grew up, whereas Yuki was quite content with her wolfish nature when they were younger. 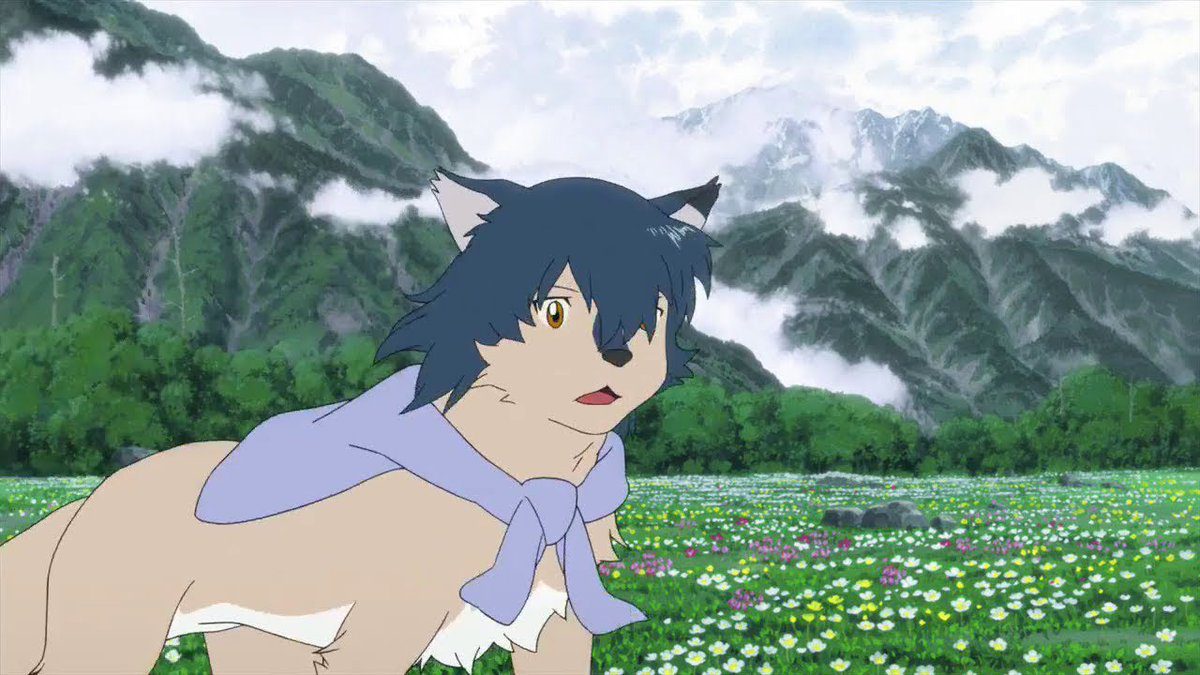 A solitary wolf’s delicate relationship with a benevolent bunny is tested in a world of anthropomorphic animals by a classmate’s murder, a captivating deer’s influence, and his own developing predatory tendencies. Beastars is an entertaining watch with many different takes on modern society.

Legoshi, often known as Legosi, is a male grey wolf that is the main character in Beastars. He is actually quite mild-mannered, meek, and clumsy, despite the fact that he is feared and underestimated by others for being a tall carnivorous. Legoshi has taken it upon himself to unravel the mystery of Tem’s murder, and as a result, he learns firsthand about the world’s prejudices.

Legoshi gradually accepts himself as a carnivorous grey wolf as the series unfolds and gains confidence in himself as he has a greater understanding of the world around him. Legoshi develops into a much more gregarious individual who enjoys being in the company of others but also appreciates being alone at times. 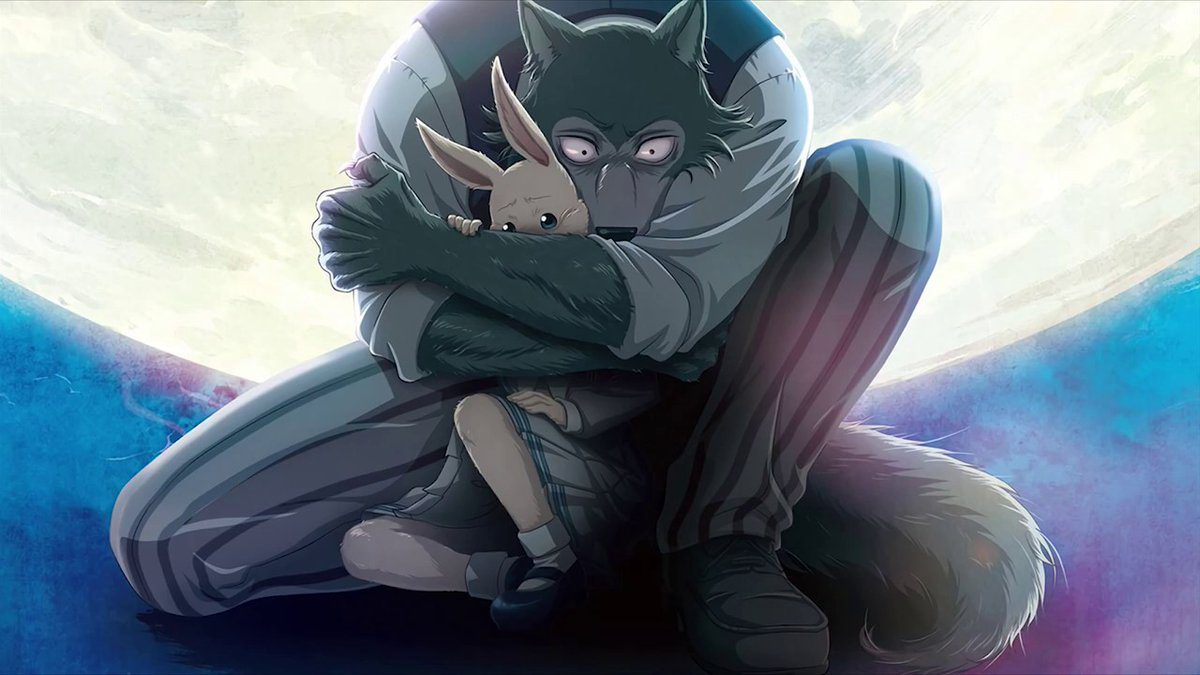 Also Read: Most Popular Must Watch Romance Anime in 2022

3. Ranga (The Time I Got Reincarnated As a Slime)

The Time I Got Reincarnated As a Slime revolves around Satoru Mikami, a lonely 37-year-old who is locked in a dead-end profession, is dissatisfied with his dull life, but after dying at the hands of a thief, he wakes up in a fantasy realm as a slime monster. His exploits with the other monsters set off a chain of events that will transform his new surroundings forever as he adjusts to his sticky new existence.

Rimuru Tempest names Ranga as one of his first group of subordinates. He is Rimuru’s most loving and loyal subordinate, virtually constantly remaining in his master’s shadow and absorbing his energy unless summoned or otherwise required. He is the current leader of the Tempest Wolf Clan and the son of the Direwolves’ former chief. Ranga is a valiant and proud beast. He has numerous canine characteristics for Rimuru, including loyalty, wagging his tail when delighted, licking Rimuru, being protective, and constantly trying to please his master Rimuru. He is willing to sacrifice everything, even his own life, for Rimuru’s happiness, and he will do everything in his power to ensure it. 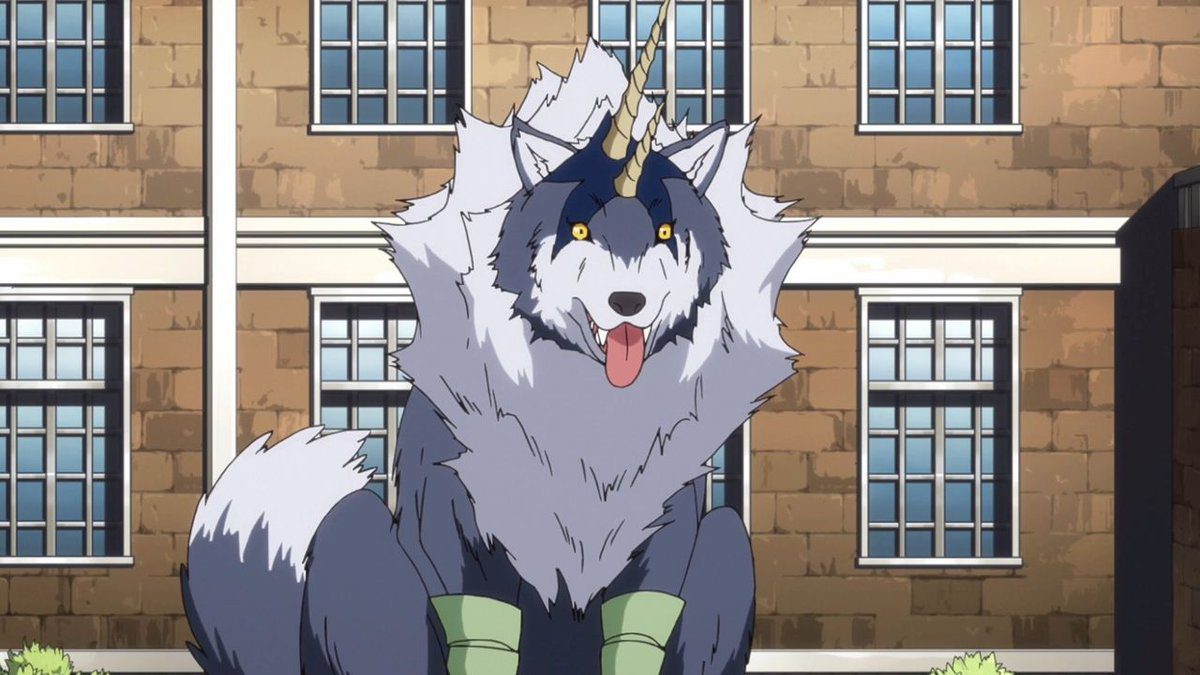 Young Ashitaka, who has been infected by an animal assault, seeks the assistance of Shishigami, a deer-like divinity. He watches people ruining the world on his journeys, provoking the wolf god Moro and his human partner Princess Mononoke’s displeasure. His attempts to mediate a truce between her and the humans only lead to more violence.

Moro is a Princess Mononoke supporting character. She is a three-hundred-year-old wolf goddess with divine strength and intelligence, as well as the ability to comprehend and speak human languages. Moro is a smart being who is perceptive to human deception. She is a stoic and tough character who is well aware of humanity’s wicked intents. She is also the wolf tribe’s leader and a caring mother. Moro appears to be menacing to Ashitaka, but he knows his love for San. Despite her dislike for people, she is very fond of San, whom she adopted after her parents abandoned her. Even after their squabble, she acknowledged Ashitaka’s bravery and love for San when he returned, despite being instructed not to return to the forest twice. 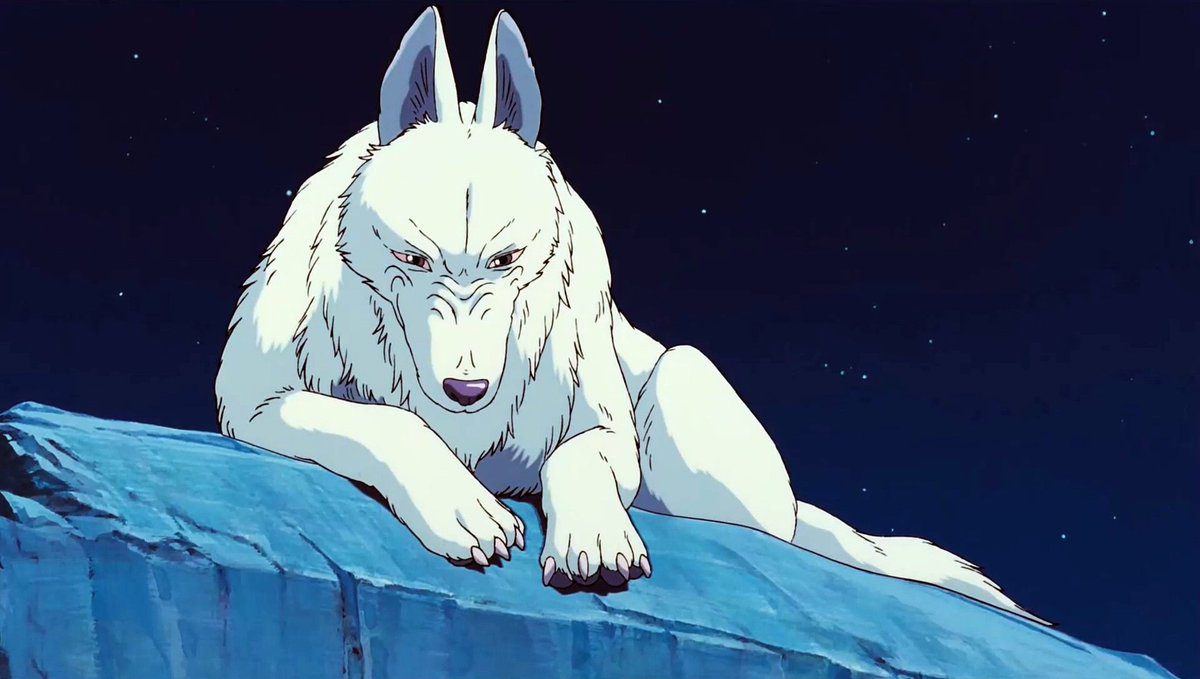 The story of Wolf’s Rain follows four wolves who have a fateful encounter whilst following the scent of the Lunar Flower and their journey to find paradise. Wolves are thought to be extinct in a post-apocalyptic future when humans live in domed cities surrounded by desolation. Wolves do, however, wander among them, impersonating humans in order to survive in the human world.

Kiba is the main protagonist and the first character presented in Wolf’s Rain. He’s meant to find the Lunar Flower and use it to unlock the door to Paradise. Throughout the pack’s search for Paradise, he emerges as their leader, never wavering in his trust that they will find a way to get there. His confidence in Paradise is unwavering throughout the series, and he is by far the most convinced of its reality. Kiba has shown to be a courageous character, always willing to defend and protect his comrades when they are in danger, often at the expense of his own safety. 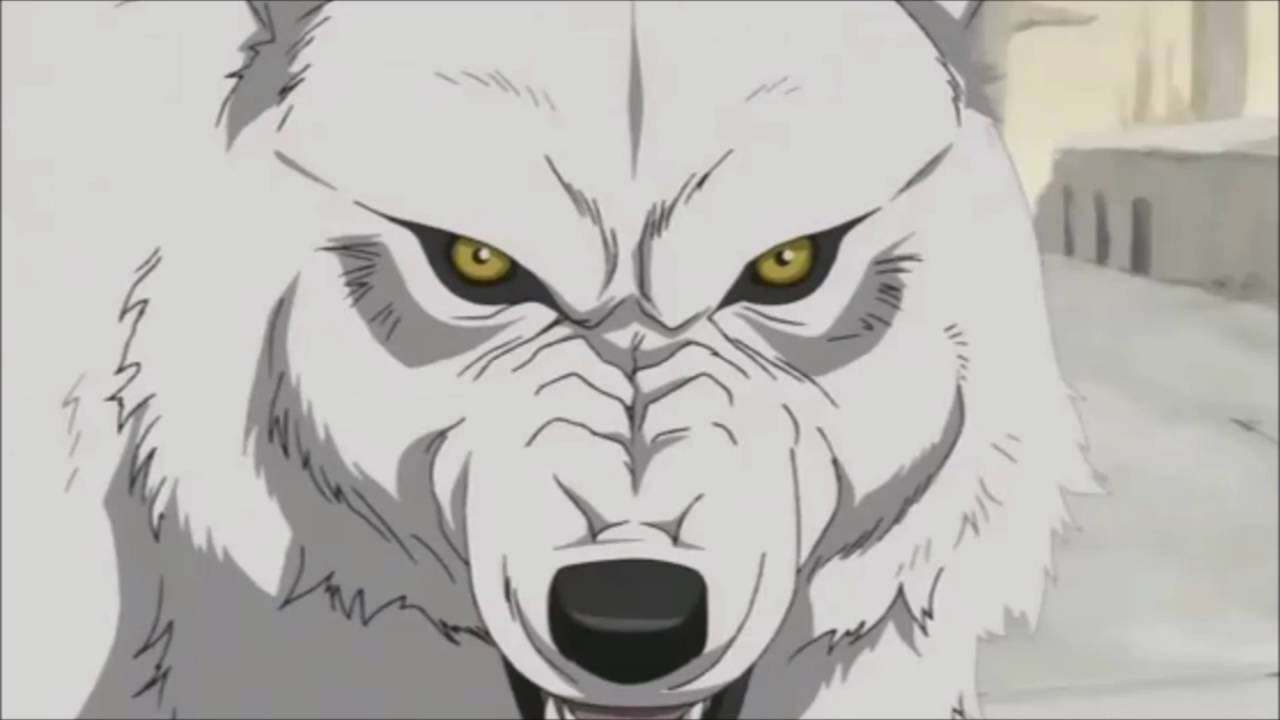 Kraft Lawrence, a 25-year-old traveling merchant, peddles various things from town to town to make a livelihood in a stylized, imaginary world with a historical setting with European elements, is at the center of Spice and Wolf’s story.

Spice and Wolf’s deuteragonist is Holo. She is a wolf spirit who dwells in the wheat, and she is a nonhuman. Holo, originally from Yoitsu, went south until she arrived in Pasloe, where she became the village’s wheat goddess. Sh escaped the field she had been living in for centuries, watching over Pasloe, by taking up residence in the wheat on a merchant’s wagon. Following that, she accompanied the trader, Kraft Lawrence, on his travels. She is mischievous with love for alcohol, anyone would love to have her as their companion. 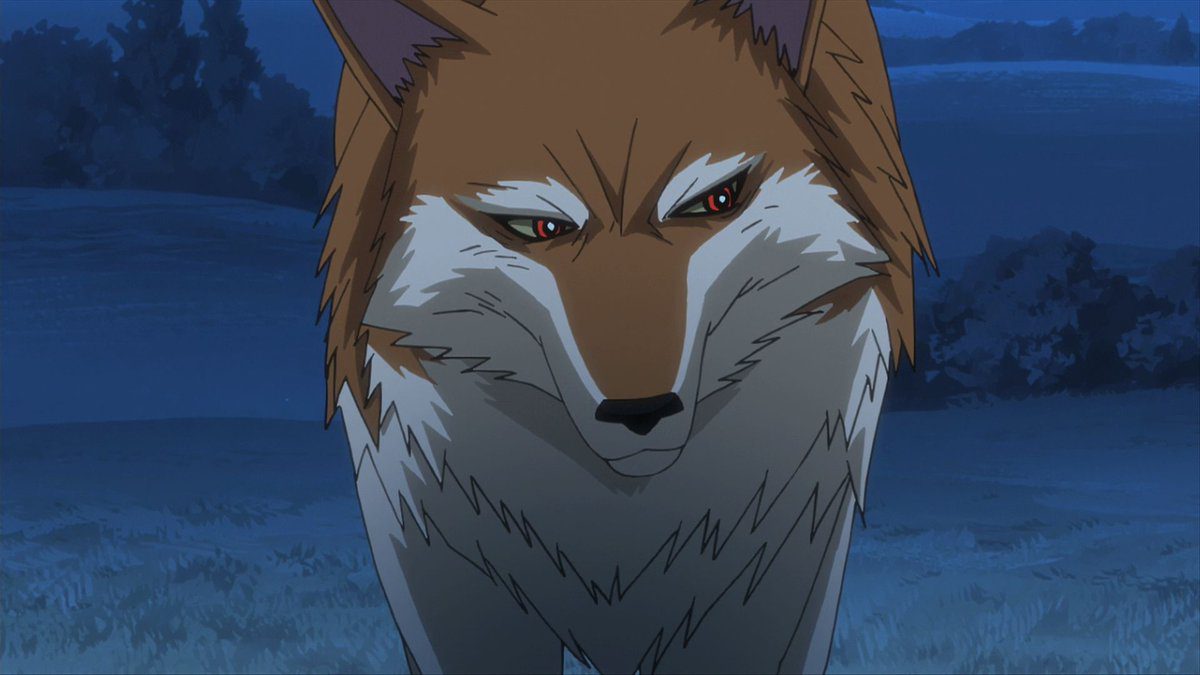 InuYasha revolves around a Kagome Higurashi, who, on her 15th birthday, is pulled into a demon well that belongs to her family’s shrine. Kagome is transported to a time when demons were abundant in feudal Japan, where she is relentlessly pursued by these nasty creatures, all in search of an object she bears unknowingly: the Shikon Jewel, a little sphere of amazing power. In the midst of this, Kagome meets Inuyasha, a half-demon kid who misidentifies her as Kikyou, a shrine maiden whom he appears to despise. Inuyasha has a strong disdain for Kagome because of her similarities to Kikyou. However, as he realizes the grave situation they are both in, he puts his animosity aside and helps her. They both set out on a journey together to look for the Shikon Jewel.

Koga was the young chief of the Eastern Yokai Wolf Tribe, also known as the Yoro clan, which Kagura and Naraku nearly wiped out. He first encountered Inuyasha as a battle opponent but eventually became reluctant, on and off ally. He had a significant rivalry with the ‘mutt’ Inuyasha throughout the series, based on their power and each canine’s desire to defeat Naraku, as well as Koga’s relentless pursuit of Kagome. 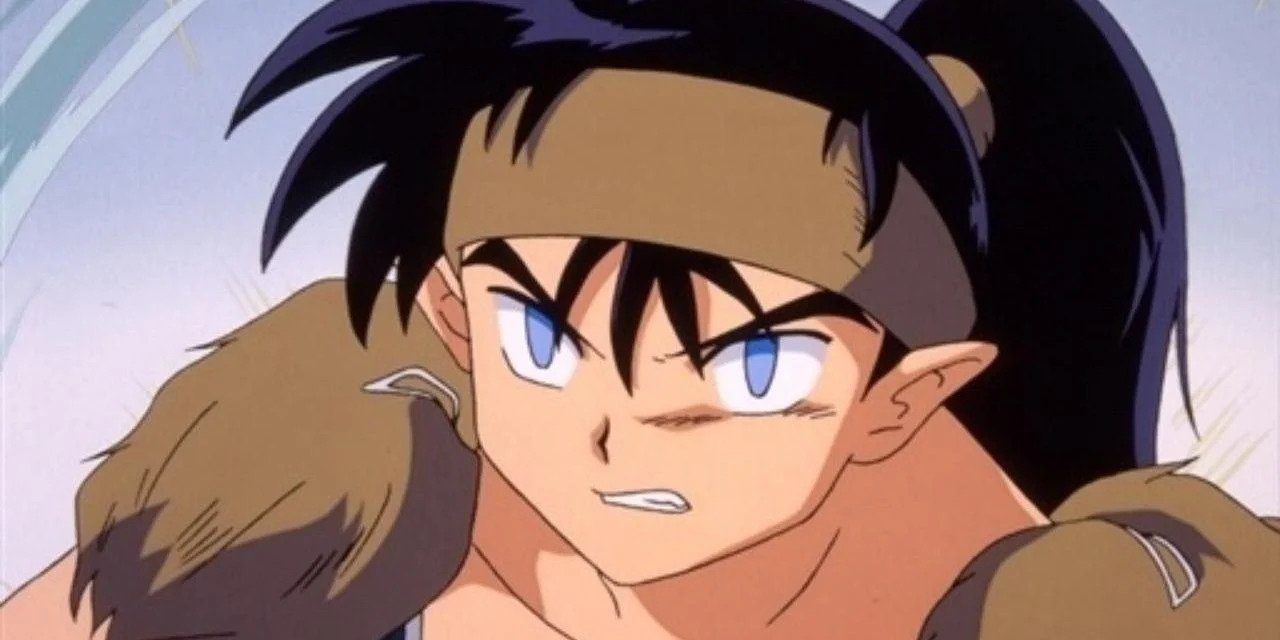 The story of Kanokon centers around Kouta Oyamada, a sweet young first-year high school student who goes from the countryside to the city and so enrolls at Kunpo High School. On his first day at his new school, he meets Chizuru Minamoto, a lovely second-year female student. Chizuru invites him to meet her in the music room alone. When he arrives, she declares her love for him and unintentionally exposes to him that she is a fox spirit. Chizuru has an on-again, off-again relationship with Kouta, which embarrasses him considerably.

A wolf spirit named Nozomu Ezomori transfers into Kouta’s school and class shortly after the story begins. She is all over Kouta from the start, which only serves to embarrass him further and irritate Chizuru at her new rival for Kouta’s affection. Nozomu appears impersonal and aloof, although she is deeply in love with Kouta and can display flashes of emotion. 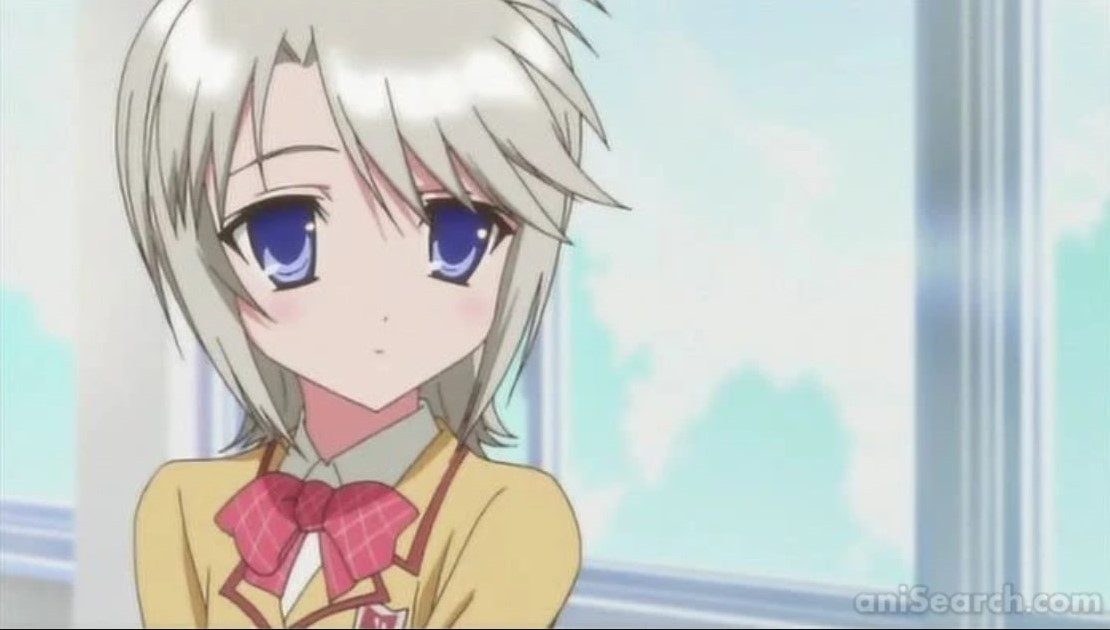 Residents of Tsuka village died in a plague five years earlier to the commencement of the tale, leaving only Shino Inuzuka, Sosuke Inukawa, and Hamaji alive. They seek refuge in a church near another community whose residents are suspicious of the survivors. The Imperial Church has now arrived in Shino’s body in pursuit of “Murasame,” the demon blade that contains “life.” When the Church discovers Shino will not accompany them peacefully, Hamaji is kidnapped, prompting Shino and Sosuke to travel to the Imperial City to save her. They run upon Satomi Rio, a Church Dean, who informs Shino he needs to find the other six bead holders.

Yatsufusa is a Sacred Beast and guardian deity who possessed Satomi Family members, usually females, with Rio being the exception. He’s a Dog God, to be sure. He is a white-haired wolf-like creature with purple eyes. He’s also three to four times the size of an average human. Except for Sosuke, Yatsufusa isn’t particularly nice with strangers. Shino has been told not to touch Rio by Rio himself. 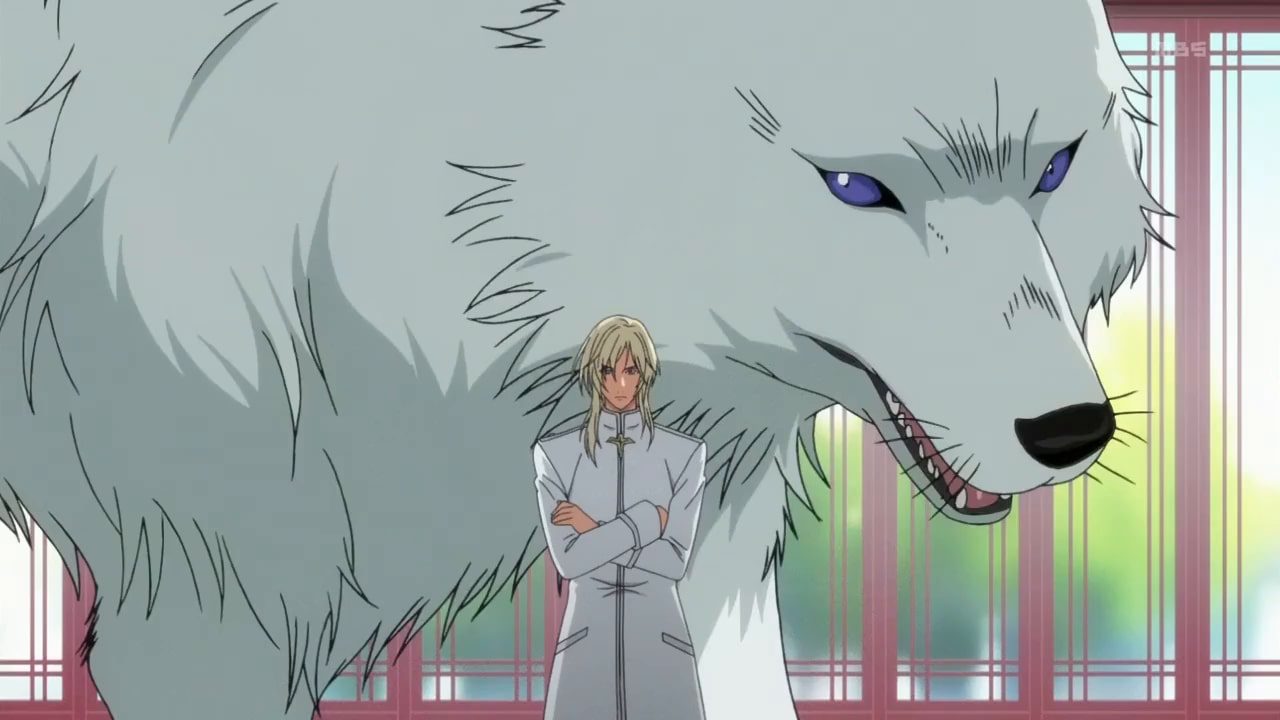 The Beholder, an extraterrestrial creature, makes a featureless white sphere that is eventually dubbed Fushi. Fushi transforms into a rock and eventually into a dying arctic wolf. Fushi meets a lonely boy who misidentifies him as his pet wolf, Joaan.

Joann’s real behavior is unknown, but it was apparently domesticated enough to live among humans as a pet during its years in the polar community. The Nameless Boy noted that it was “less talkative than normal” when Fushi returned in its place, indicating that it was an expressive and noisy animal. 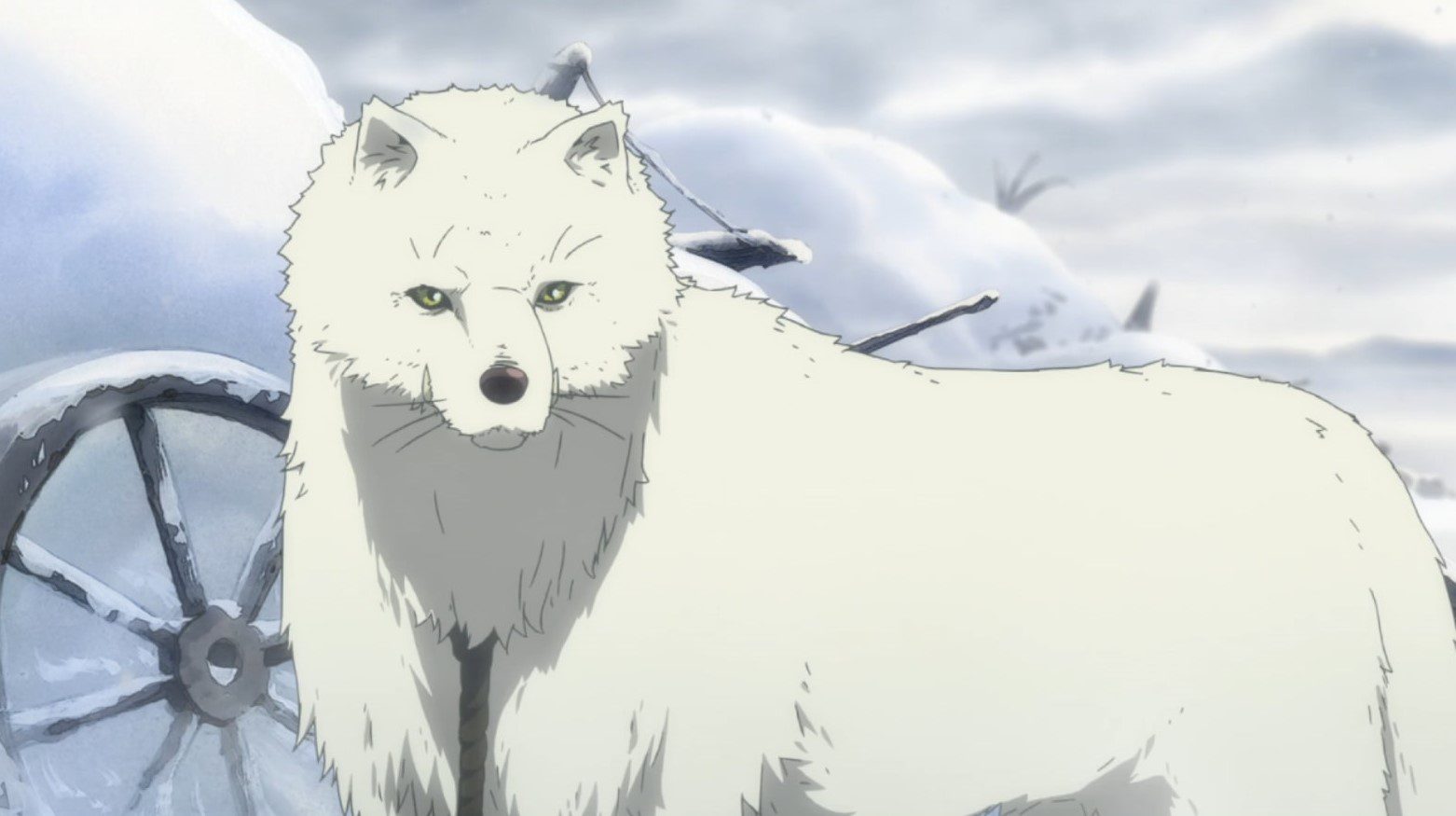