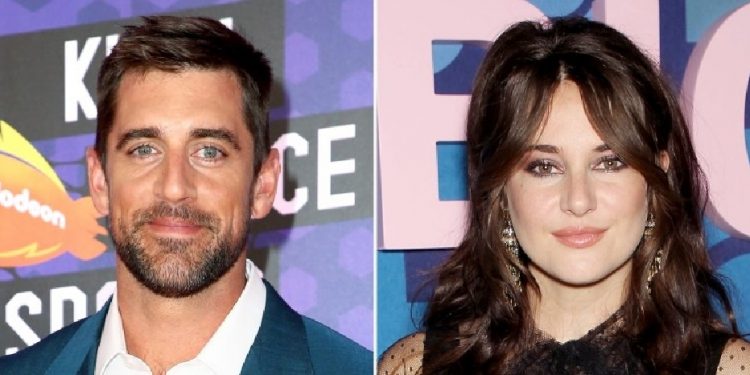 Are Aaron Rodgers And Shailene Woodley Still Together

The famous couple Aaron Rodgers and Shailene Woodley seem to be an ideal match. They’re frequently photographed together on vacations and at social events, and they’re both extremely successful in their own fields. However, speculations have begun to circulate that the two were drifting apart and that a breakup was imminent as a result of how they were living their lives following the COVID-19 bubble. Are Aaron Rodgers And Shailene Woodley Still Together? Let’s disprove these rumors once more to see whether there’s any truth to them.

Aaron Rodgers, the quarterback of the Green Bay Packers, turned 38 on December 2, and his fiancée Shailene Woodley did not mention the occasion on social media or stand by his side during the festivities. Apparently, this has nothing to do with their relationship, but it has sparked speculation over whether Aaron Rodger and Shailene Woodley are still together. Well, You must get all the answers here below. Enjoy Reading.

Aaron Rodgers and Shailene Woodley are “still together,” but their relationship is extremely confidential. The Green Bay Packers quarterback celebrated his 38th birthday on December 2 without his fiancée by his side. Woodley also neglected to mention the event on social media, leading some followers to wonder about their relationship status. According to a source close to the “Divergent” star, this indicates nothing, and the couple’s relationship is still going strong. “They have a unique, non-traditional relationship,” and  Shailene and Aaron haven’t broken up yet.

In that way, it’s not surprising that they don’t talk about one other’s birthdays and are quite private about things. The couple, who met in the midst of the pandemic in 2020, has kept their relationship mostly hidden from the public view since they began dating. Rodgers revealed his engagement during the NFL Honors broadcast on CBS in February when he won the Most Valuable Player award. In his acceptance speech, he acknowledged his “fiancée,” but he didn’t say who she was. However, allegations quickly spread that he proposed to Woodley since she was his final love connection.

Who is Aaron Rodgers?

Aaron Charles Rodgers is an American football player who now plays for the ‘Green Bay Packers’ of the ‘National Football League’ (NFL). When he led his club to a ‘Super Bowl’ championship in 2011, he became well-known. Aaron, who was born in Chico, California, has always been a football fan. He would sit through and watch an entire NFL game when he was two years old. Aaron also participated in other sports as a kid, such as baseball and basketball. At the 2005 NFL draught, he was predicted to be selected by the ‘San Francisco 49ers.’ Later, The ‘San Francisco 49ers’ preferred Alex Smith over him. The ‘Green Bay Packers’ then selected Rodgers.

Aaron has proven his worth throughout his career with his incredible skills and accomplishments. He holds the NFL records for “greatest touchdown to interception ratio” and “most consecutive games without multiple picks. Rodgers is also noted for his humanitarian efforts. He was able to raise $50,000 for the MACC Fund, a cancer research organization.

Who is Shailene Woodley?

Shailene Woodley from the United States is a famous actress and activist. She rose to fame after playing ‘Alexandra ‘Alex’ King,’ a drug-addicted adolescent in ‘The Descendants.’ She followed up her acclaimed performance in ‘The Descendants’ with a string of outstanding performances that demonstrated her ability to represent tough roles seamlessly.

Early in her career, Shailene was able to earn a prominent position in the film industry, which is an accomplishment in itself. Shailene began her acting career in commercials and television shows before moving on to big roles in Hollywood blockbusters. Woodley has won numerous honors for her acting abilities, including the ‘MTV Movie Awards,’ ‘People’s Choice Awards,’ and ‘Teen Choice Awards.’ She’s also been nominated for big accolades like the BAFTAs, Golden Globes, and Primetime Emmy awards. Shailene Woodley is a prominent actress who is also an environmentalist and activist.