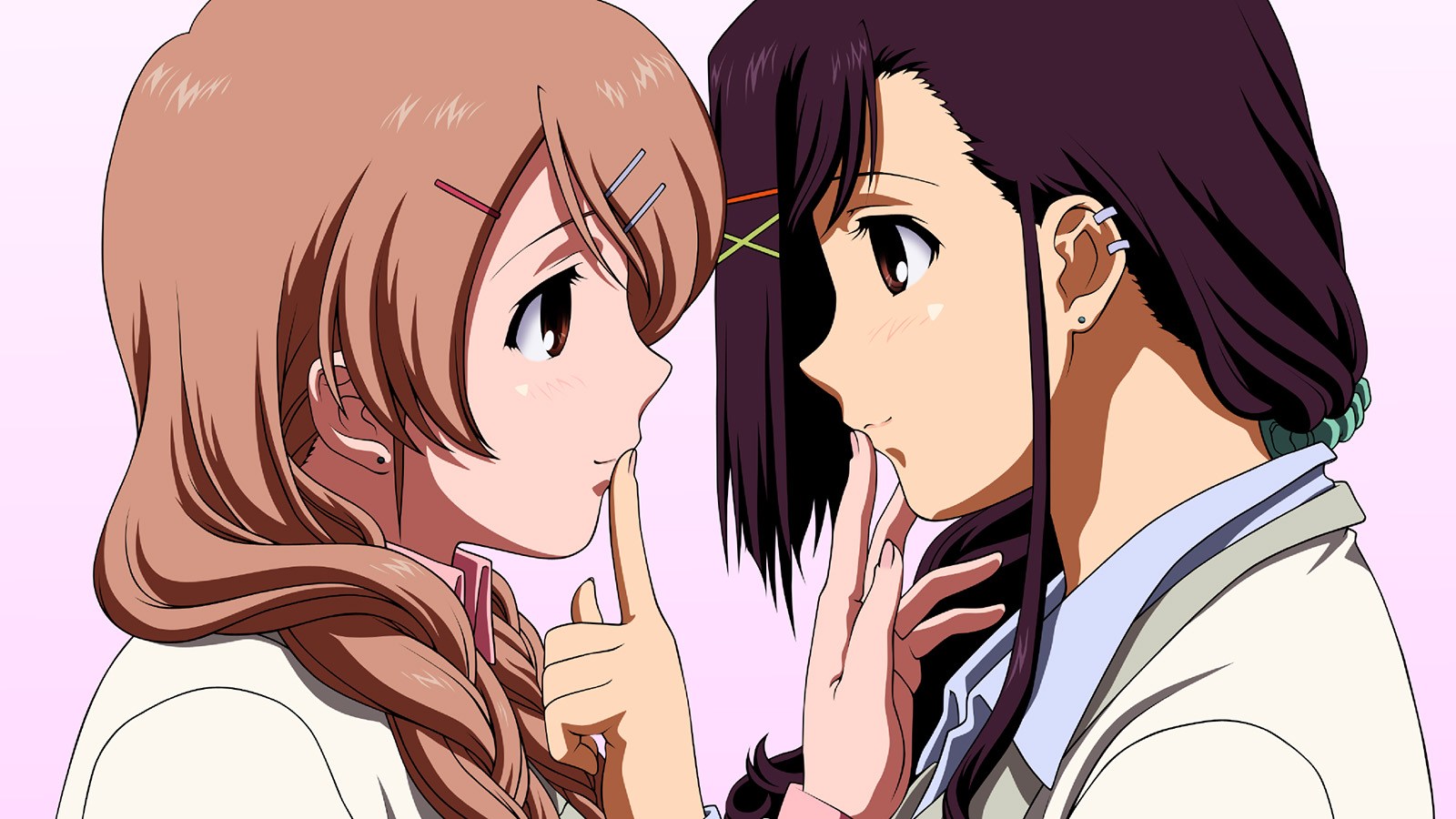 Let’s have a look at 10 Yuri Anime Series.

Waking up transformed into a beautiful girl might be the stuff of some guys’ fantasies, but when the suddenly effeminate Natsuru is informed by a stuffed tiger that he’s now a Kampfer, a mystical fighter who has to fight other Kampfers in female form, his life becomes a living nightmare! Putting aside the obvious “plumbing” issues, Natusru’s best childhood friend turns out to swing the other way and SHE has a crush on his new female body. Oh, and did we mention that some Kampfers use swords and gun?! Hormones, fists, and other body parts will fly as the daring, new gender-blender defender must become a contender or die!

The opinion around is this show is controversial. The plot is not that great, but the animation is undoubtedly amazing and lovable. Kampfer is funny and the girls are cute. And if you like fan service, this is it!.

To describe this show in two words, lesbian assassins is what it is. The story is set at Myoujou Academy, a private girls’ boarding school. The 10th year’s Kurogumi class has 12 assassins with their sights on one target, Haru Ichinose. Tokaku Azuma is a recent transfer student who is also targeting Ichinose, but she gradually develops feelings for Ichinose.

So between all the awesome fighting taking place, there was still enough room for some even more awesome yuri subtext to take place. Haru x Tokaku might have gotten the most screen time, though I’m pretty sure that some other pairs had enough time together to share some yuri love, whenever they were not on screen as well. However, this show lacks plot and character development.

No. 8 Inugami-san to nekoyama-san

The story revolves around Nekoyama Suzu, a timid, shy tsundere girl loves dogs, and Inugami Yachiyo, a super masochistic, air-headed, friendly girl who loves cats. One day, after a fateful meeting, the two find themselves attracted to each other. In response to Inugami’s instinctive approaches, Nekoyama is always bashful. Their friend Aki has to work hard to make jabs at some of the situations of the two, and also to stop Inugami from going berserk. There you have a recipe for a true yuri comedy.

This series is short, 3 minutes per episode but interesting and sweet. The great thing about this running at such a short length is that the anime is able to convey the central plot without adding too much filler. With great animation, this show is ligh hearted, entertaining, and enjoyable even though it is short. The characters are cute and adorable.

Nakamachi Kana is a junior high school girl. Her grandmother passed away and she was left all alone. She finds a newspaper carrier station and starts working as a live-in carrier. Her room has a hole on the wall. Other female workers living next door comes in through the hole and start a wild merrymaking.

Kanamemo is a bit more naughty when it comes to yuri humor mainly because of Haruka harassing Kana. Everything is done in a playful manner and Haruka’s antics often fail to “catch” Kana, so it’s not really too bad.The show also has the couple Yume and Yuuki to provide sweet and cute moments, so there’s something for everyone. And let’s not forget Mika who is totally gay for our heroine Kana. The story is not too bad, but this show is definitely funny and cute.

The highborn Himemiya Chikane is cool and aloof, the perfect young lady of good breeding. Kurusegawa Himeko is devoted to her, and secretly her friend. Their lives are undisturbed in their school until an ancient evil suddenly rears its head. To combat it, Chikane and Himeko must take on the roles of shrine maidens of the Moon and Sun.

We have to see beyond the fact that the story might not have been the best, with huge plot holes and plot twists that just didn’t make any sense. What actually makes so many of us love Kannazuki no Miko is rather its two heroines and the love they share. More than that, this show has decent animation with great mecha fighting. And once more thing to note that, Kanazuki no Miko may start unappealing but if you continue to the end, you may find the show worth watching.

No. 5 Sono Hanabira ni Kuchizuke wo – Anata to Koibito Tsunagi

An OVA featuring the couple from the third visual novel of the same name, Sono Hanabira ni Kuchizuke wo – Anata to Koibito Tsunagi tells the short story of Sawaguchi Mai and Kawamura Reo and how they went from confession to love-making.

Right after starting middle school, Akari Akaza joins the Amusement Club which is composed solely by her two childhood friends, Kyouko Toshinou and Yui Funami. Chinatsu Yoshikawa, Akaza’s classmate, becomes a member after finding out about the dissolution of the Tea Club.  The Amusement Club, situated at the tea room facility since the Tea Club disbanded, has no clear purpose, being free for the girls to do whatever they want.

The yuri content might also not be that high, there is no actual romance involved other than some characters drooling over their crushes. It will probably never cross that border, even if we already saw some kisses happen. However, this show is notable for being extremely hilarious with the super moe animation. And just from the title, we can tell that this show is light-hearted, funny and enjoyable. And this series is, indeed, success with 3 seasons and OVAs.

In the original manga’s story, Fumi and Akira were close childhood friends until Fumi had to move away. Ten years after losing touch with each other, the two girls meet again as high school freshmen. The two struggle to reconnect after so much has changed, and both deal with the trials and tribulations of high school — sometimes independently and sometimes with each other’s help. It’s a true coming together for these two protagonists in this anime, and a superb examination of yuri.

Compare to other funny and comedic seires, Aoi Hana is best known for its plot, a very thoughtful and touching story. The story and characters are not shallow, and the character development is really good. Aoi Hana is sweet, gentle but dramatic. The only minus point of this show is the animation.

Aoi Nagisa transfers to one of the three affiliated all-girl Catholic schools on Astraea Hill, St. Miator’s Girls’ Academy. There, she discovers a community of fellow students entwined in an intricate hierarchy, in which two Etoiles represent the three schools. In order to fit in, Nagisa must go to class, join clubs, and make new friends. Meanwhile, Shizuma Hanazono, the sole Etoile of Astraea Hill, finds herself drawn to this new, exciting transfer student. As Shizuma and Nagisa get to know each other, Shizuma finally decides it is time to face her troubled past.

This is the first show on this list with 26 episodes of 20-minute length. Strawberry Panic is absolutely a classic yuri that you must watch. This show has a very good plot and characters development with great music and art. It surely is dramatic. And the characters are cute and yet, s__y. It has to describe Strawberry Panic as it has almost everything of a good quality series, and yes, a well-done yuri anime.

Love is in the air when the story of Sakura Trick begins. Haruka Takayama and Yuu Sonoda were best friends in middle school, and are now attending Misato West High School together. They are assigned to the same class in their first year, but are given seats on opposite sides of the room! Haruka gets jealous of Yuu making new friends though, so the two decide to deepen their bond. “Let’s do something we’d never do with other girls,” Yuu says, and they share a kiss in a vacant classroom after school one day. After that one kiss leads to many kisses, the two begin to realize that the relationship they share has changed completely. But what will happen to their relationship once a disapproving older sister begins to suspect that something is going on between the two?

A bonafide yuri anime, Sakura Trick tells the love story of Takayama Haruka and Sonoda Yuu and how they slowly build their newfound love for each other. Their love life isn’t really easy as they battle against a jealous big sister and hide their relationship from everyone. This series is sweet, innocent, gentle, and romantic with, of course, drama. And to build up a relationship, this show surely has a decent plot and character development.

And why is this show number 1? If you love kissing, this anime has LOTS of it, Literally, you’ll see kissing scenes in every episode.