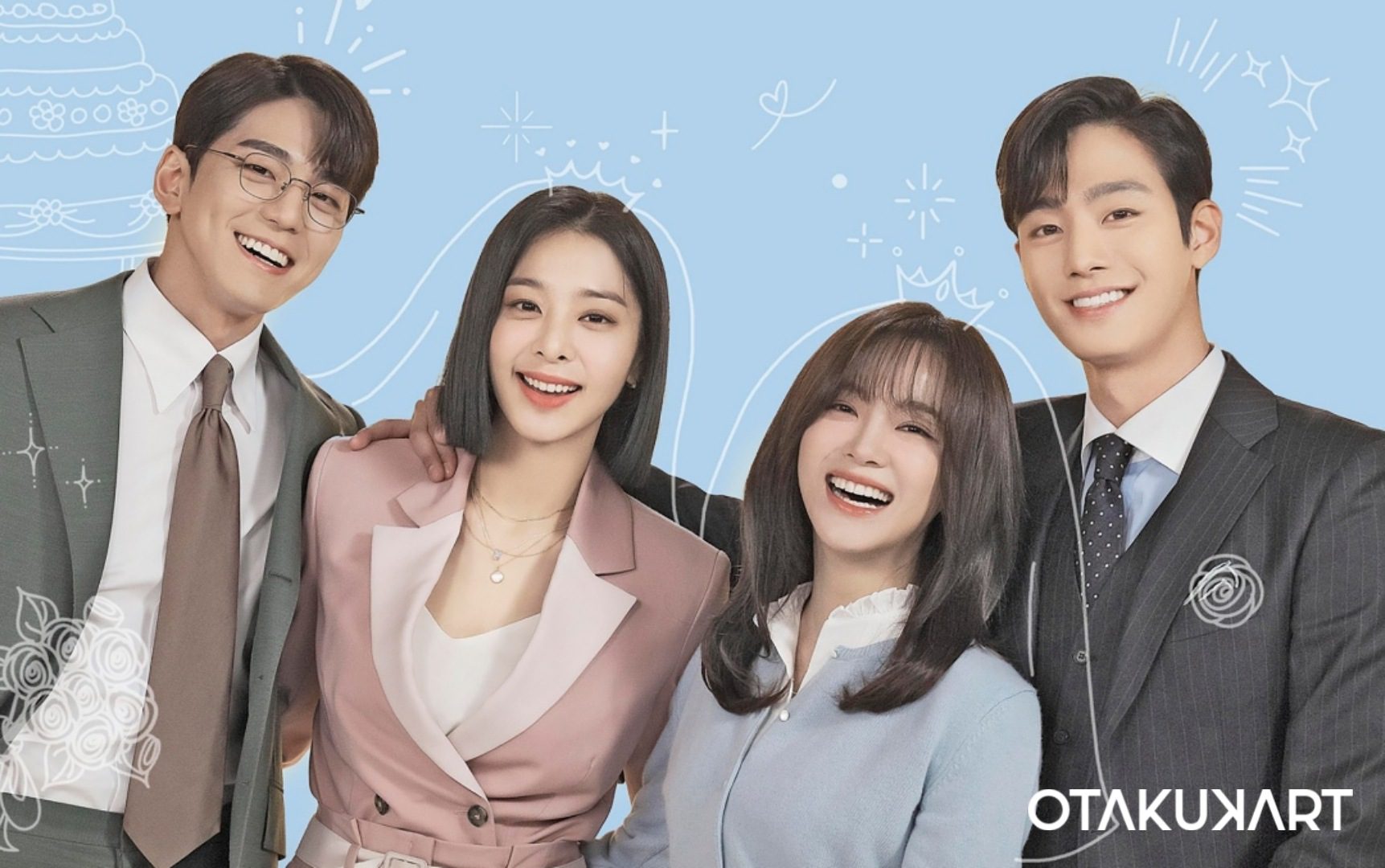 Apart from the masses who have entered the K-drama world through trendy shows like ‘Squid Game’ and ‘All of Us Are Dead,’ a majority of people have begun watching K-dramas with rom-coms. Starting from ‘Boys Over Flower’ to ‘True Beauty,’ the show makers always find a way to utilize the typical K-drama cliché, either directly or in a twisted manner.

However, lately, the South Korean entertainment industry seems to have minimized producing light-hearted and easy-watch K-dramas and have moved towards more thrilling and unique story arcs. Well, they are definitely an upgrade from what we used to have a few years ago, but that doesn’t ensure we don’t miss the old-school K-drama vibes!

The recently released Netflix K-drama, ‘A Business Proposal’ has been the talk of the community ever since it started airing. The hype is all about coming across the perfect rom-com K-drama one has watched in a long time! It centers on a woman named Shin Ha Ri, who, in order to meet her requirement of money, agrees to go for a blind date in place of her best friend.

However, she realizes that the guy whom she is trying to fool is the CEO of the company she works at, Kang Tae Mu. As planned, Ha Ri makes sure to make him reject her, but unexpectedly, Tae Mu decides to marry her, and thus the venture begins! Wondering what’s so special about this not-so-unique storyline? Here are all the reasons why you should invest yourself in this show!

1. The Lineup of Charismatic Main Characters

Have a look at the leads and tell us they don’t look like the people who have just stepped out of a webtoon! The very first scene in which we witness a transition from webtoon to live-action is definitely eye-catching. The charming Ahn Hyo Seop playing the character of the genius and calculative Tae Mu and Kim Se Jeong as the beautiful and funny Shin Ha Ri— who else can make a better pair than them! 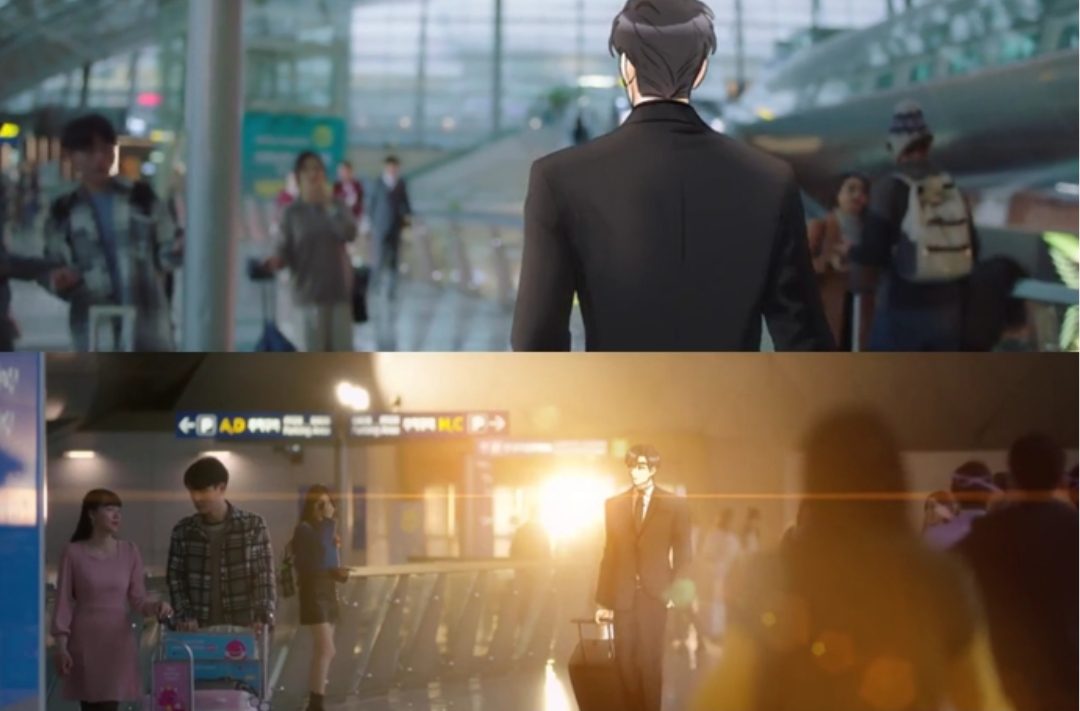 The Introductory Scene of “A Business Proposal’

From the gestures to the intonation of Ahn Hyo Seop’s character in this drama, have you noticed its striking resemblance with Park Seo Joon’s character in ‘What’s Wrong with Secretary Kim’? The same narcissistic and flawless guy who is still sweet to his lady! Ahn Hyo Seop has been a part of the hit Korean series ‘Abyss,’ ‘Dr. Romantic’ and ‘Lovers of the Red Sky’ while Se Jeong has gained recognition in acting with ‘The Uncanny Encounter’ and ‘School 2017’.

2. A Solid Storyline for the Secondary Couple

One of the most effective ways to make a show more engaging and energetic is the addition of a secondary couple who have their own solid side story! While most of the time they are assigned to support the main leads, in dramas like ‘Descendants of the Sun,’ ‘Run On,’ and ‘Doom At Your Service’ the supporting couples out-shine the main couple. ‘A Business Proposal,’ also features the love story of Kang Tae Mu’s assistant, Cha Sung Hoon, played by Kim Min Gue, and Ha Ri’s best friend, Jin Young Seo, played by Seol In Ah. 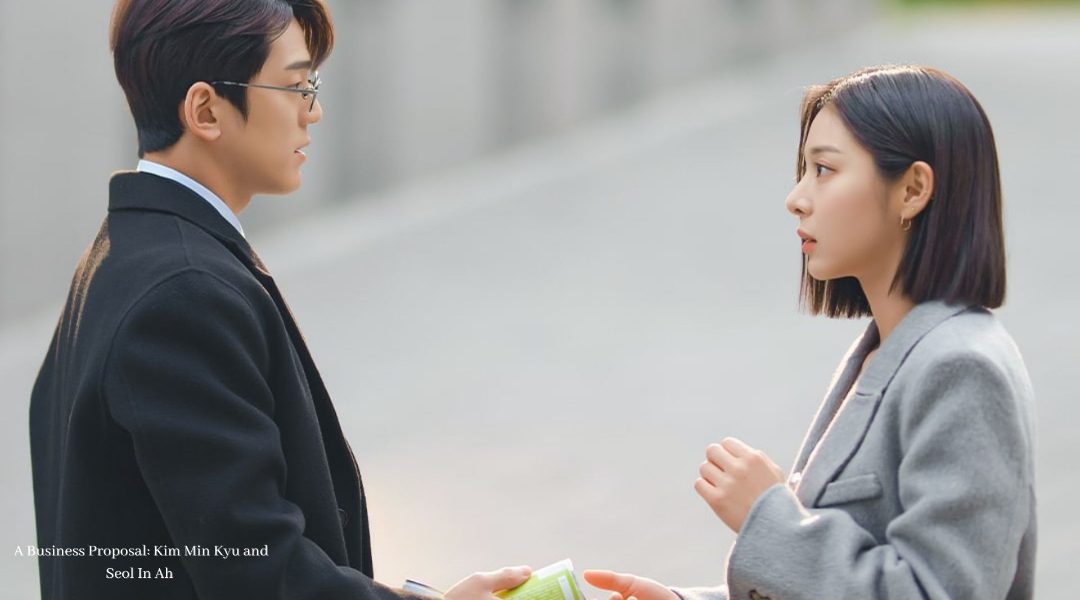 They make the scenes so dynamic to watch that it feels like they are the leads of their own show! While Cha Sung Hoon is loyal and trustworthy, Jin Young Seo is upbeat and positive. They might end up being our latest couple to feature in, ‘Came for the main couple but stayed for the second couple’ series!

3. A Grandfather Who is Cooler than the Main Lead!

K-drama series where the family members form a barrier between the possible happily-ever-after story of the leads are already outdated. Most of the time, the family members are supportive towards their children’s love life, but Tae Mu’s grandfather seems to be the matchmaker of their relationship!

From the very first episode, he has been giving the plot a direction, and the way he pushes his grandson to fulfill all his demands is such a show-stellar! Him watching TV series with his face mask on and passing judgments on those typical K-drama scenes make him, so fun to watch. In just a few episodes, Senior Mr. Kang has managed to have a separate fanbase that absolutely adores him!

There is a saying in the K-drama community that rom-coms are incomplete without cliché and second lead syndrome. While ‘A Business Proposal’ has made use of almost every possible K-drama cliché, it has hinted about the absence of any possible second lead syndrome. Coming from the spectators of office romance K-Dramas like ‘She is Pretty’ and ‘Her Private Life’ where no matter how hard you ship the main couple, you are ought to feel bad for the second male lead, ‘A Business Proposal’ is a much-needed watch! However, that doesn’t mean it doesn’t feature a love triangle.

The female lead, Shin Ha Ri, has been in love with her university friend, Lee Min Woo, played by Song Won Seok, for the last seven years. However, when she realizes that he will never have feelings for her while watching him going back to his ex-lover all over again, she gives up on him. In the future episodes, Min Woo might as well realize his feelings for Ha Ri, but it doesn’t look like he will manage to gain the sympathy of the spectators. So, get ready for a guilt-free watch!

5. Comedy That Will Make You Fall Down From Your Seat!

If you have lately been missing K-drama comedy like the ones we have enjoyed in ‘She is Pretty’ and ‘What’s Wrong With Secretary Kim,’ God has answered your call! With the overload of action, thriller, and melodramatic shows for the last few months, ‘A Business Proposal’ has come up as a stress reliever. Remember the blind date scene when Ha Ri mentions ‘Samantha and Rachel,’ that makes Tae Mu spill his coffee! That’s the genre of comedy we have been craving for, haven’t we? Moreover, Ha Ri rejects Tae Mu after calling him an archaeopteryx, and Sung Hoon realizing how much he resembles the bird-like dinosaur can not be funny!

6. The Enchanting Chemistry Between the Leads

No matter how great the storyline is, if the chemistry between the main leads is bland, the show won’t be able to keep its viewers. And the makers of ‘A Business Proposal’ have made sure to work on this! Even though Tae Mu and Ha Ri are putting on a fake dating show, the viewers can feel the sizzling chemistry between them. The scene where Tae Mu blows off the candles on the cake with Ha Ri while helping her with her ripped dress or when he helps her put on her shoe are some of the instances that prove he has already fallen for her. On the other hand, the way both of them wish each other on their fake first anniversary with the most sincere emotions in their eyes looks surreal! 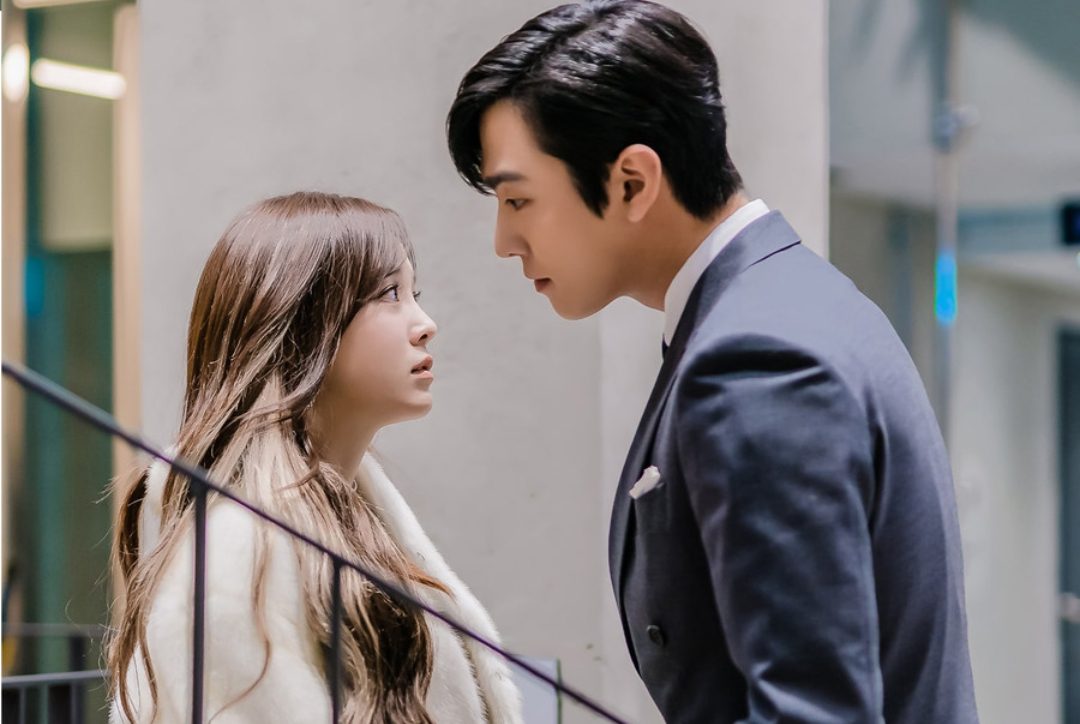 Tae My and Ha Ri

Fortunately, the secret about the fake identity of Ha Ri is partially revealed within the first three episodes of the drama itself. This ensures enough time for the leads to develop their relationship without the fear of misunderstanding in the latter part of the drama.

7. The Bond of Friendship That the Female Leads Share

It’s common to witness bromance story arcs in K-dramas but sis-mance is something rare and ‘A Business Proposal’ has made sure to give us one. Despite the contrast between the family backgrounds of Shin Ha Ri and Jin Young Seo, they have been the best of friends for years. They share their life issues with each other, get drunk, and even get scolded together like blood siblings.

Young Seo acting cute in front of Ha Ri, expecting her to fulfill her demand but bringing trouble for her in return, if that’s not the real trait of a sibling then nothing is! Thank heavens! They won’t turn into love rivals in the future and stain their friendship. The scene when they get drunk and make police officers drop them at home is one of the most hilarious moments of the show. 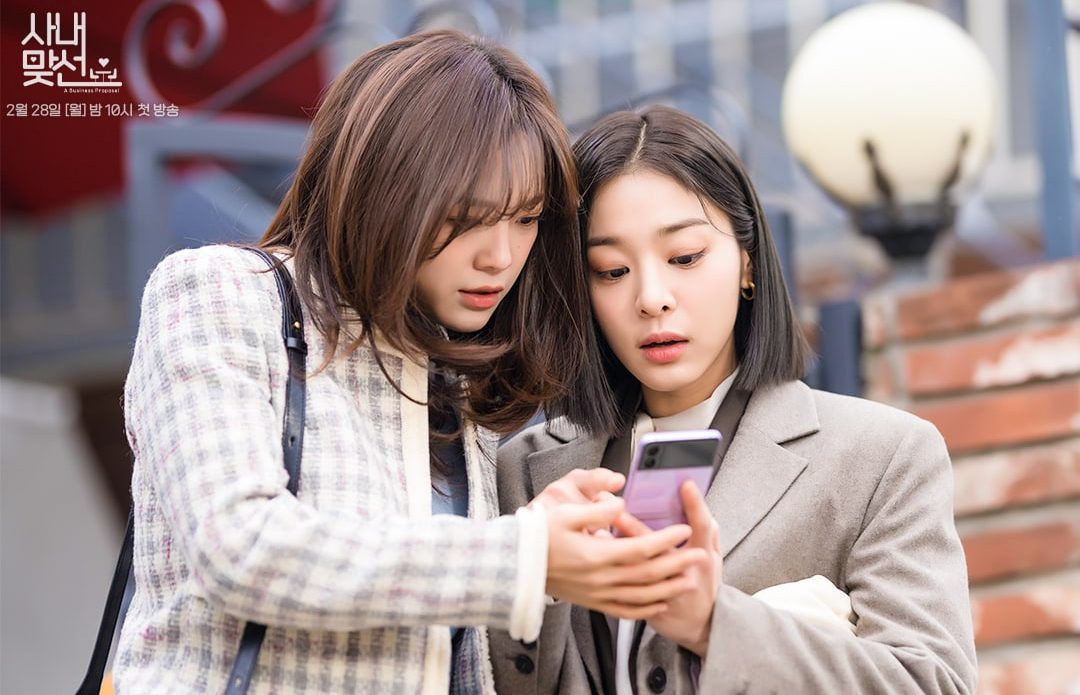 8. The Brotherly Bond of Tae Mu with Sung Hoon

Tae Mu’s chemistry with his assistant is also unparalleled! We K-drama addicts have always been a sucker for bromance moments and the way Tae Mu and Sung Hoon have been shown to be very professional at the workplace along with being great buddies is definitely a treat for us. We are yet to discover the backstory of their bond but it seems like we can expect a lot more bromance scenes between them in the upcoming episodes!