The majority of tragic accidents that occur in our world are due to human error. From the Chernobyl disaster to the Beirut explosion in 2020, humans themselves are the cause of the majority of the accidents that take place. However, something truly horrifying happened on the morning of December 6th, 1917, during the height of the first world war, that remains monumentally devastating in its respect. The ship Mont Blanc, laden with heavy explosives to be used in Europe, collided with the SS Imo on her way out of Halifax Port, Canada. The results were devastating.

Mont Blanc exploded with such sheer ferocity that it became the largest man-made explosion until the United States dropped the atomic bomb on Japan in 1945. In fact, the Halifax explosion remains the largest non-nuclear explosion to date. However, this tragedy, which cost the lives of 1782 people, could have been easily avoided had the ships’ captains proved to be more cautious and less egoistic.

SS Imo was a Norwegian ship that had arrived at Halifax to carry cargo toward war-stricken Belgium. The ship had arrived on December 3rd but wasn’t stocked until the 4th. She had been given permission to clear port by the 5th, but due to her coal coming late, the ship wasn’t filled until late that night. SS Imo couldn’t leave after restocking her coal either, as the anti-submarine nets had been raised for the night.

SS Mont Blanc, on the other hand, was a French cargo ship. The Mont Blanc had been filled to the brim with explosives and dangerous cargo that was to be used against the Germans on the Western Front.  As she had arrived late on the evening of December 5th, the nets had been raised Mont Blanc had to wait outside the city, at anchor, for daylight. Though ships carrying perilous and dangerous cargo of explosives were banned from entering the civilian port, the outbreak of the World War and the increased risk of the German submarines had allowed the rules to be revised and the regulations to be relaxed. 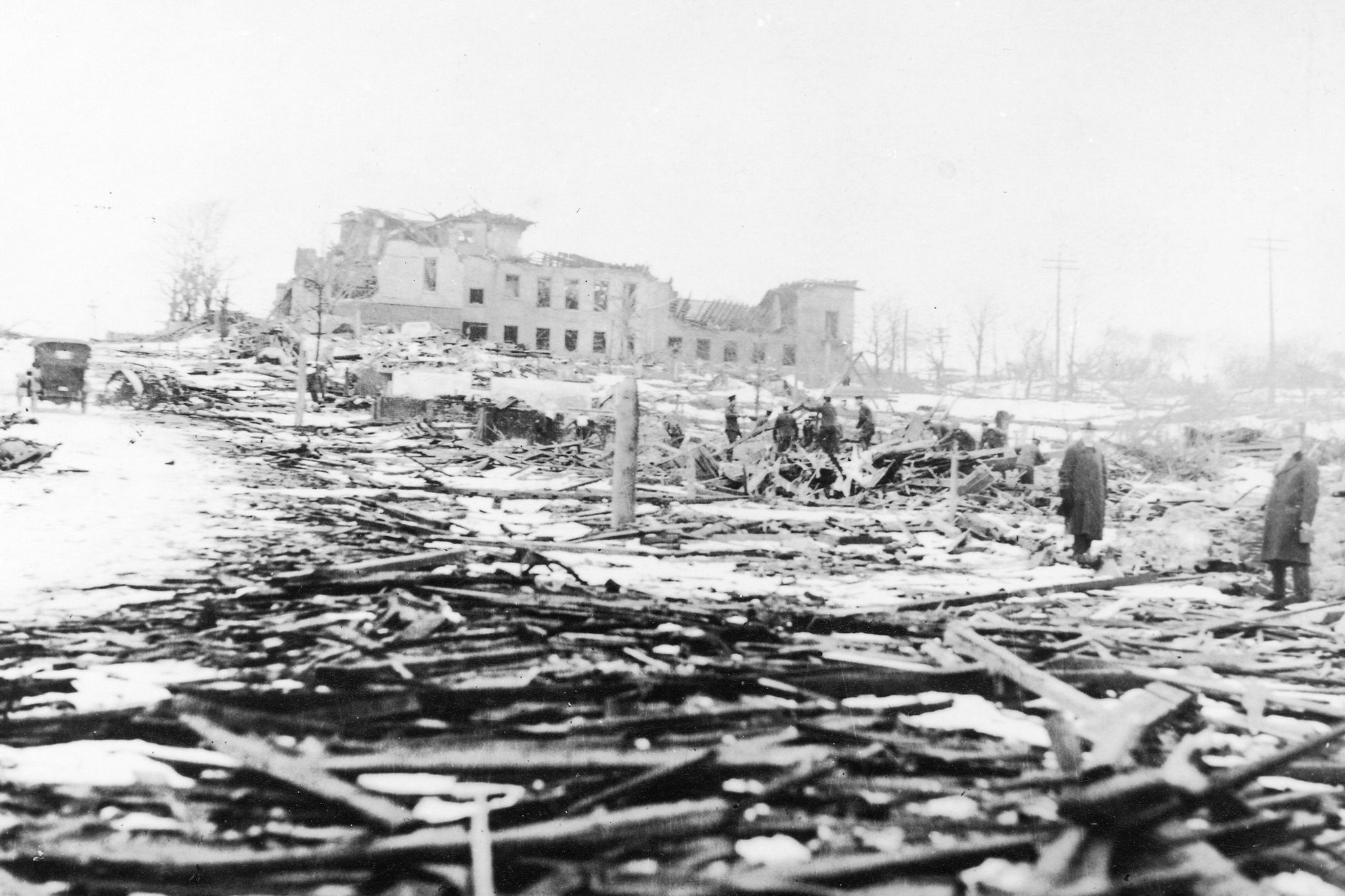 Halifax, after the explosion

A ship entering or leaving the Halifax port had been restricted to a maximum speed of 5 knots. As SS Imo prepared to leave, she was already behind schedule. Hence, she was traveling much faster than the permitted limit. At this same time, Mont Blanc entered the port. She saw the Imo approaching fast and at a steep angle (Imo was exiting the port on the wrong side) and realized there could be a collision. Mont Blanc, which was traveling at a speed of 1 knot, blasted her horn so that the Imo would change course. SS Imo replied with two horns. She wasn’t going to yield her position.

Mont Blanc’s captain gave orders to stop engines and angle to the starboard; at once, he understood that it would be a tight pass. He ordered another single blast in hopes that the SS Imo would change course herself, but the Imo returned another double blast. She wouldn’t comply. On hearing the simultaneous blasts from the ships, the sailors aboard other ships, and people on the port, gathered to watch what seemed like an inevitable, imminent collision. By now, both the ships had cut their engines, but the momentum of the behemoths carried them forward.

As the captain of Mont Blanc couldn’t abandon ship, as the cargo they were carrying were military-grade explosives, he ordered a hard-to-starboard. For a moment, it seemed that it would be a near miss as the Mont Blanc violently traversed herself. But SS Imo sealed the fate by giving three short blasts of the horn; the Imo was reversing her engines. The sudden reversal of the engines slowed the Imo considerably. The combination of the cargo-less Imo’s height in the water and the transverse thrust of her right-hand propeller caused the Imo to turn sharply and right into the Mont Blanc. Imp’s bow sliced through the prow of the Mont Blanc, compromising her cargo.

The ships collided at 8:45 am. The damage to Mont Blanc wasn’t severe, but the force of the collision caused the barrels on the deck to burst open. The benzol from the barrels seeped into the hold, where the explosives were kept. Imo’s engines soon kicked in, and she disengaged, creating sparks inside Mont-Blanc‘s hull. These ignited the benzol, and a fire started at the water line and traveled quickly up the side of the ship. 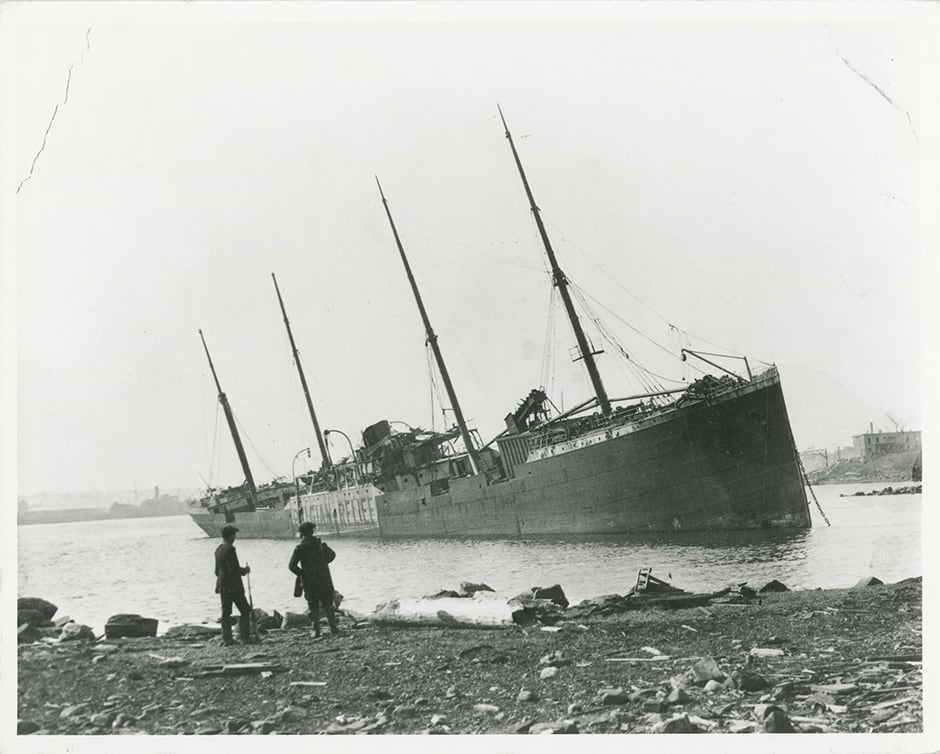 Knowing that the ultimate was about to happen and realizing there wasn’t anything he could do to stop it, the captain of Mont Blanc immediately ordered his men to abandon the ship. By now, Mont Blanc’s superstructure was on fire, and the port was watching it, awe-struck. The frantic crew of Mont-Blanc shouted from their two lifeboats that the ship was about to explode, but over the excitement from the crowd, they were not heard.

At 9:04:35 am, a flaming Mont Blanc exploded. The ship was completely blown apart, and her forward turret was launched into the air. The turret came down 5.6 kilometers away, and her anchor, which weighed half a ton, settled 3.2 kilometers away. The explosion killed 1600 people instantly, with another 300 dying later. This tragedy could’ve been prevented had the captain of the Imo acted wisely.

Read More: The Legend Of Agartha: The Lost Continent