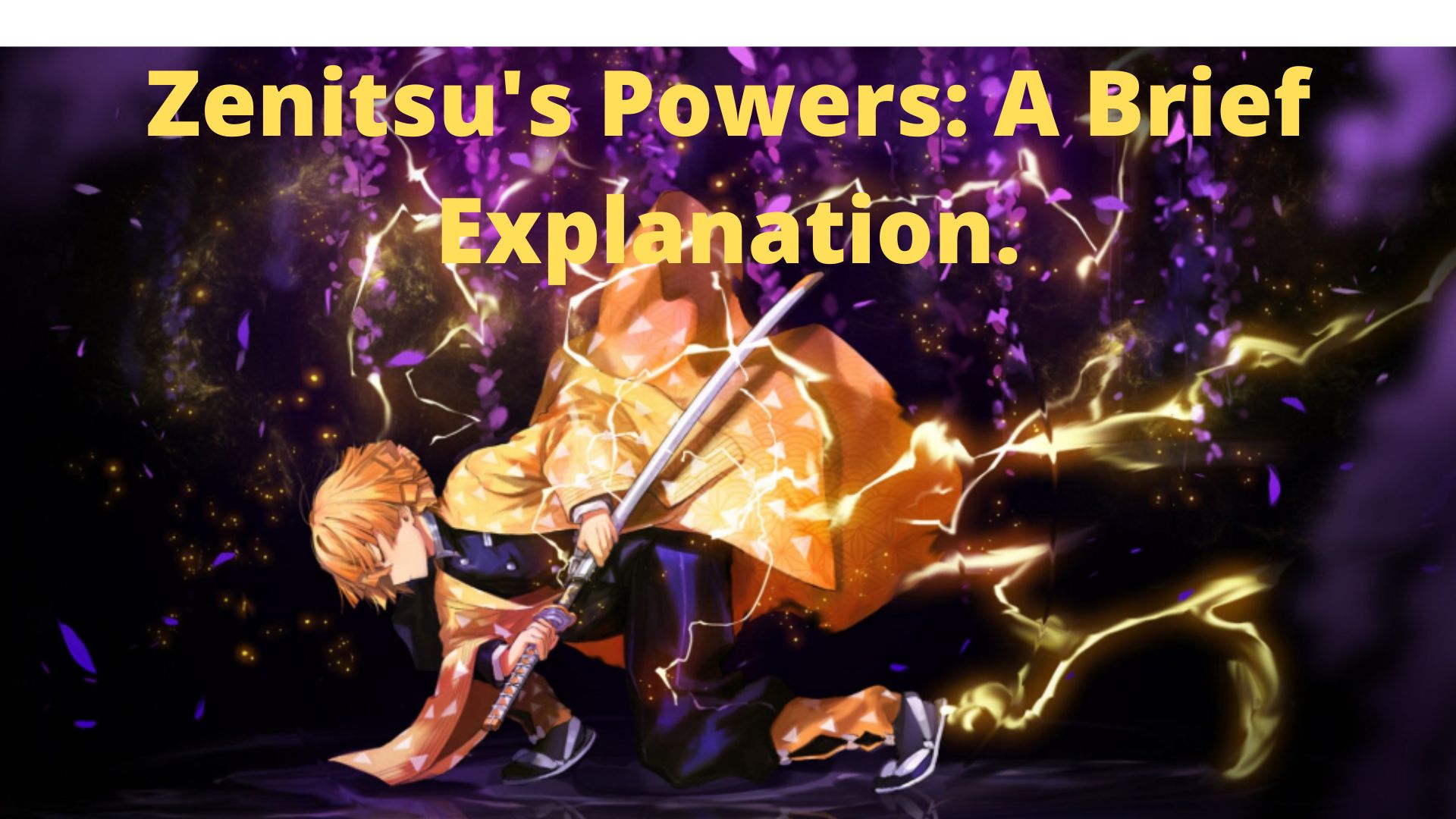 If you are an anime fan, you might have encountered a mind-boggling power at least once. Whether be it Itachi’s Izanami or Zenitsu’s Electricity. Well, we should not call it that. However, today we will discuss Zenitsu’s powers briefly. Today’s topic is Zenitsu’s Powers: A Brief Explanation. So buckle up, homies, and don’t forget to not fall asleep like him.

One of the critical characters in Demon Slayer: Kimetsu no Yaiba is Zenitsu Agatsuma, who, along with Inosuke Hashibira, travels with Tanjiro Kamado and Nezuko Kamado. He belongs to the Demon Slayer Corps and is also a Demon Slayer. Zenitsu is a little lad of average height, fair-skinned, with eyes that slant downward in fear and change color from light brown to gold. He has bangs that fall unevenly in front of his face. Much smaller, yellow hair of varying lengths makes up his hair. They merge into a darker orange tint. Zenitsu’s hair was black when he became a Demon Slayer. However, when he was hit by lightning while undergoing training, it changed into the color it is now.

He dons a lighter brown variation of the normal Demon Slayer outfit. It includes his distinctive white-triangle-patterned. Yellow-and-orange gradient haori, a dark brown gakuran jacket, a white belt around his waist, and hakama pants that extend. Zenitsu also wears a pair of Kyahan. He pairs these with about the same pattern as his haori. Moreover, three white bows are tied at the front.

Due to his skill with a sword and the astounding array of abilities he possesses, Zenitsu is one of Demon Slayer’s most formidable combatants.

When the occasion demands it, Zenitsu acts bravely, especially when it comes to defending his companions. He’s a worthy opponent in battle. Zenitsu has killed a number of demons during his time in the Demon Slayer Corps. Thanks to his superb swordplay and extended the reach of his skills and abilities, despite his lack of confidence. He wields a blade called a “Nichirin Blade,” a katana made from an ore that continuously absorbs sunlight. Which just so happens to be a serious flaw of the demons they fight.

Zenitsu’s “Thunder Breathing” swordsmanship technique, when mastered, enables its user to swing their katana so swiftly that it resembles lightning. Zenitsu can dash at any demon he’s battling at a blindingly rapid pace. Moreover, behead them before they have a chance to respond while armed with his sword and the Thunder Breathing technique. Zenitsu’s sword skills in Demon Slayer are supplemented by a variety of unique abilities. He demonstrates incredible speed and strength in battle despite suffering numerous wounds. He possesses a remarkable tactical genius that enables him to determine his opponents’ weaknesses.

The Use of Additional Senses

Zenitsu is not the most powerful character in Demon Slayer. However, he also has superhuman hearing, which enables him to hear danger in even the slightest sounds. As a result of this, he also has extrasensory perception. This enables him to hear people’s thoughts and emotions just by listening to their sounds. The capacity of Zenitsu to engage in a fight while dozing off or otherwise incapacitated in Demon Slayer may be his most astounding strength. This talent was developed as a result of his propensity to faint when his worries get the better of him. However, falling asleep has no effect on any of his other skills; in fact, there are instances when he does better in battle when he isn’t even awake.

When Zenitsu is awake and conscious of his environment, he can be worthless because he panics so badly that he frequently begs Tanjiro to save him. However, when Zenitsu is asleep, he is able to let go of his crippling dread and worry and allow his talent to come through. Zenitsu is comparable to Rock Lee from the comic and anime series Naruto in this regard because they both need to enter a different mental state in order to access some of their more potent abilities. Zenitsu needed to fall asleep in order to use his faultless sword and breathing method, unlike Rock Lee, who needs alcohol to trigger his Drunken Fist.

Even though Zenitsu has unusual abilities in and of itself, the way in which he must sleep in order to use them is strange. When a demon put the demon slayers to sleep in Demon Slayer: Mugen Train, it proved to be incredibly helpful. Even though Zenitsu was using the blood demon art, he was still able to fight the demon because of this.

When Zenitsu is dozing off, he can use his powerful thunder breathing techniques to move with his Nichirin Blade at breakneck speed. Sleeping allows him to display his amazing powers, which lie latent beneath his flighty demeanor.

Also Read: What Episode Does Rock Lee Take Off His Weights?