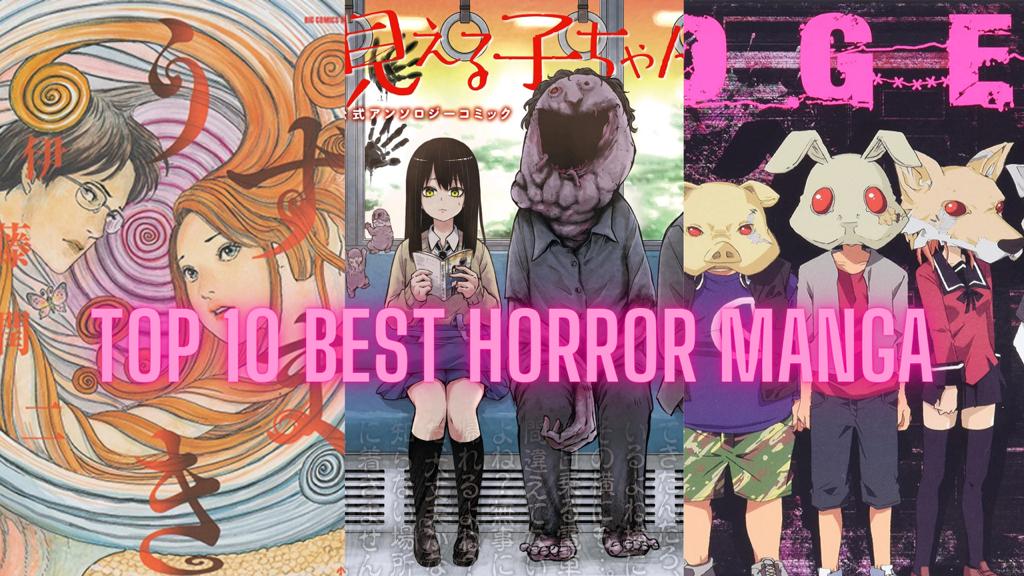 Let’s Talk about the Top 10 Best Horror Manga That You Can’t Resist Reading. We’ll also talk about why you should read these manga. Reading Manga in a sense is pure bliss as it introduces a reader to many more imaginative characters with great Plot Developments. Whenever we try to read a type of manga, we all feel a certain amount of pent-up emotion being burst into a form of wholesomeness. Many Genres of manga are out there with so many different characters that easily woes the heart of one. And among them is the Horror Genre which has grasped the Manga industry for many years with many devoted fans. Let’s Discuss this all in detail.

Horror as a Genre is not only about scary gory panels but also about the psychological aspect of one’s mind. What does one feel while witnessing a gruesome murder done by his/her family member? Or How does one find the path to freedom through a spiral of darkness? Well if you are fascinated by these questions you might find the list we have prepared for you interesting. Some of these manga dive deep into the horror aspect of human emotions and crazy scary panels. So keeping that in mind, Here is the list of Top 10 Best Horror Manga.

Mieruko Chan manga is written and illustrated by Izumi Tomoki. The Story Follows Miko Yotsuya, a high school girl who has a special gift to see spirits. Her life turns upside down when those horrifying spirits threaten her best friend’s life. The Reason Mieruko chan was on the list of Top 10 Best Horror Manga was due to its blend of comedic and Horror situations that the characters face. Miko’s character is forced to deal with many chaotic situations which will be very engaging for the readers. 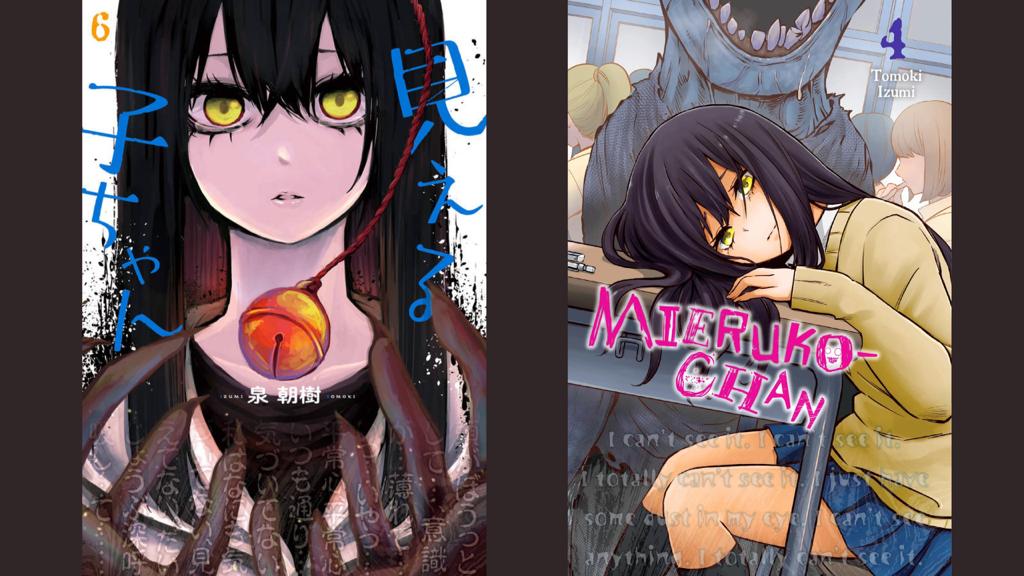 Doubt manga is written and illustrated by Yoshiki Tonogai. The Story follows a group of six high school friends who are forced to participate in the Rabbit Doubt game. The Rabbit doubt is a survival game in which a group of rabbit players identifies the wolf among them, and if they fail they get killed by the wolf. Who is the traitor amongst these six high school friends? The Reason Doubt was on the list of Top 10 Best Horror Manga was due to its thriller – Horror aspect of the story. The Suspense is mind-blowing when everything gets revealed at the end. 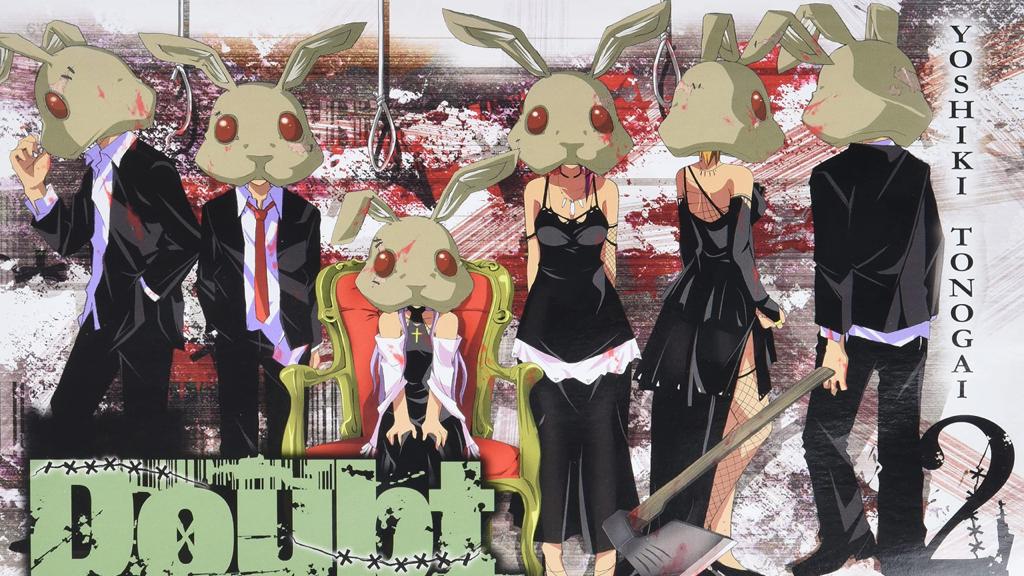 Starving Anonymous manga is written by Yuu Kuraishi and Illustrated by Kazu Inabe. The Story follows Ie, a high school student. One day when returning home from school, his bus gets flooded with gas and he suddenly passes out. He wakes up to find himself in a truck packed full of human bodies which are ready to get processed into sugary fluid bodies. How will Ie be able to escape this hell? The Reason Starving Anonymous was on the list of Top 10 Best Horror Manga was due to its over-the-top creepy artwork and promising story that has great character development. 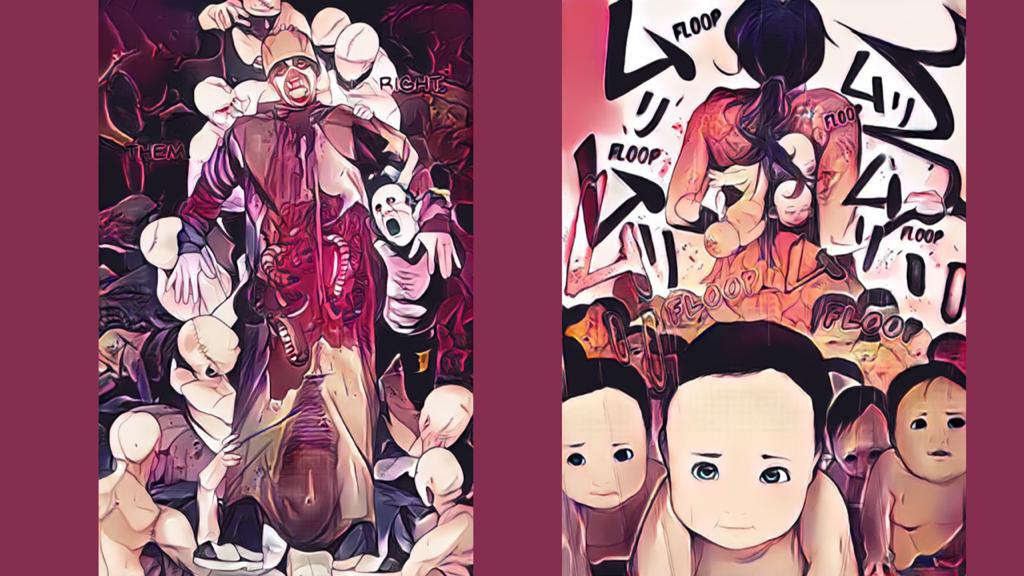 Also Read: 10 Creepiest Episodes In The Uzumaki Manga: Horror That Will Make You Tremble

School-Live manga is written by Norimitsu Kaihou and Illustrated by Sadoru Chiba. The Story follows Yuki Takeya, an elementary school girl who is obsessed with her school. She is part of the School-Live Club and according to the club rules she is not allowed to go home. In Yuki’s mind, a school is a lively place but in reality, it’s a hell hole where students have become zombies. And Yuki is not accepting this reality shutting away all her memories by creating a mirage of fake school life. The Reason School Live was on the list of Top 10 Best Horror Manga was due to Yuki Takeya’s character. She goes through an insane transformation journey. 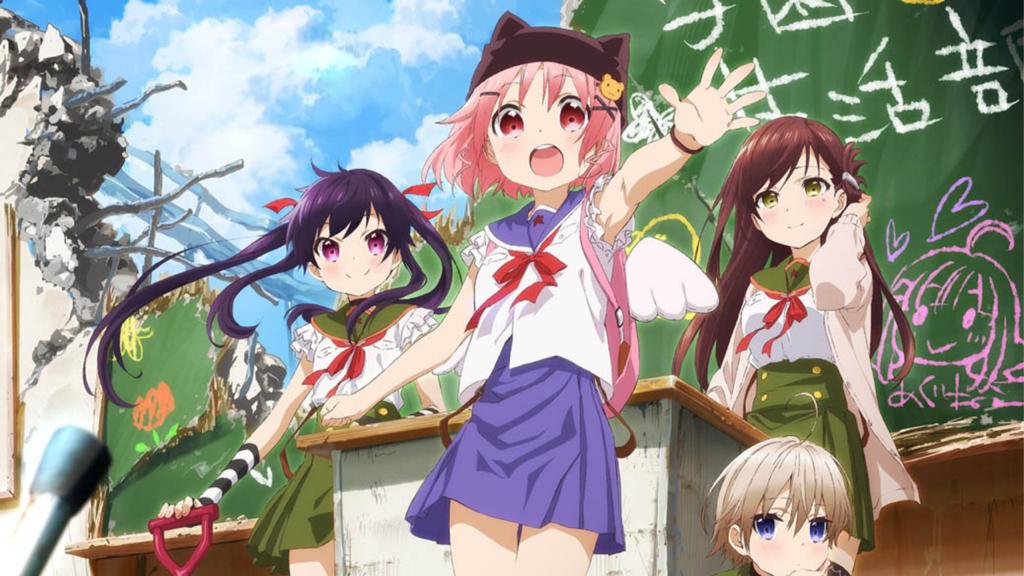 Fort of Apocalypse manga is written by Yuu Kuraishi and Illustrated by Kazu Inabe. The Story Follows Yoshiaki Maeda, a 16-year-old young boy who was framed and convicted wrongly on charges of murder. When he arrives at Shouran Academy Juvenile Detention center, he is placed in a cell with three other fellow inmates who are detained on various heinous charges. Stuck between the politics of Prison, Yoshiaki soon finds himself in deep trouble when the prison is attacked by infected Zombies. The Reason Fort of Apocalypse was on the list of Top 10 Best Horror Manga was due to its Zombie-centric approach to creating something new as the story progresses. 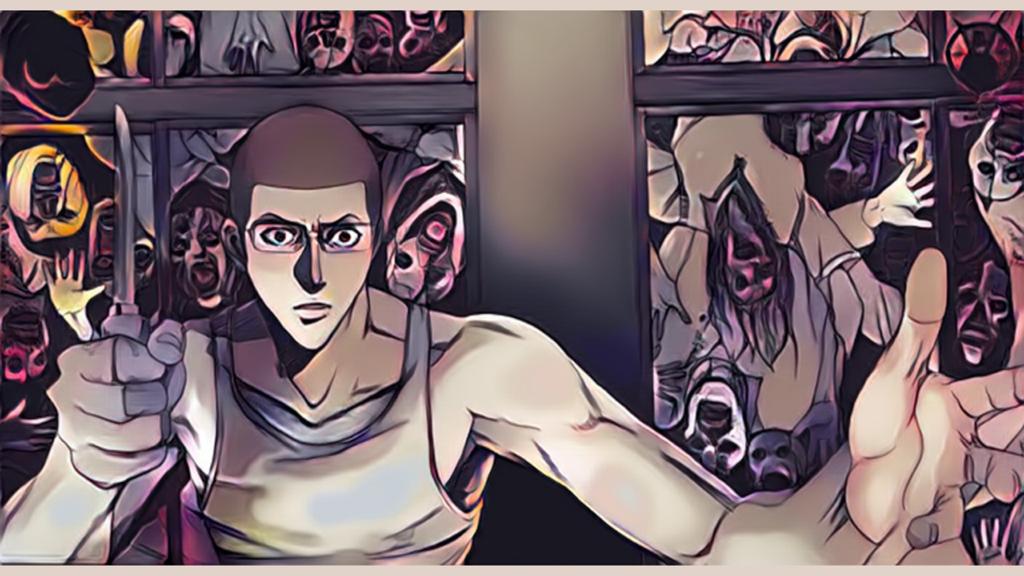 Also Read: Top 10 Manga That Has a Live Action

5. My Dearest Self with Malice Aforethought

My Dearest Self with Malice Aforethought manga is written by Hajime Inoryuu and illustrated by Itou Shouta. The story follows Eiji Urashima, an average university student, who leads a normal life with his friends. One Night after returning home from a party, he goes to bed only to find himself waking up three days after beside a beautiful girl named Kyouka Yukimura who claims to be his girlfriend. Having no recollection of the last three days, Eiji falls into a deep spiral of betrayal and sorrow as he finds his biggest secret exposed in front of the whole world as he is the son of a Serial Killer. The Reason My Dearest Self with Malice Aforethought was on the list of Top 10 Best Horror Manga was due to its suspense aspect of the story, there are many instances when Eiji deals with gruesome situations. 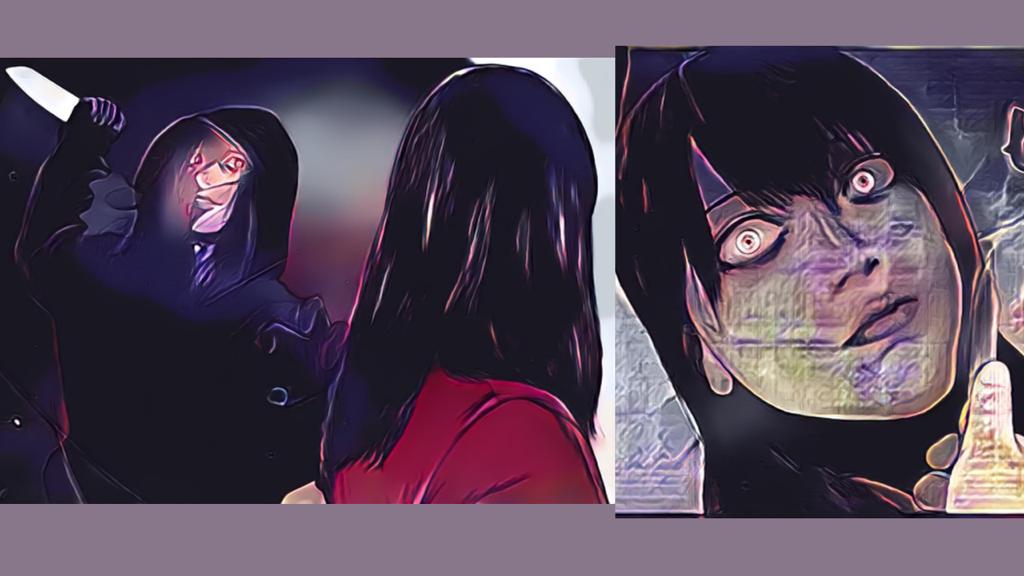 My Dearest Self with Malice Aforethought

God Child manga is written and illustrated by Yuki Kaori. Set in 19th-century London, the story follows Cain C. Hargreaves, a young nobleman who has inherited his role as the head of the family. He Investigates various mysterious and gruesome murders involving seriously disturbed people. The more he dives into the investigation the more it becomes difficult for him to digest the reality of the situation. To help him along is his Butler Riff and his 10-year-old half-sister Mary Weather. The Reason God Child was on the list of Top 10 Best Horror Manga was due to its portrayal of dark murder stories which will shake you to the core while reading. 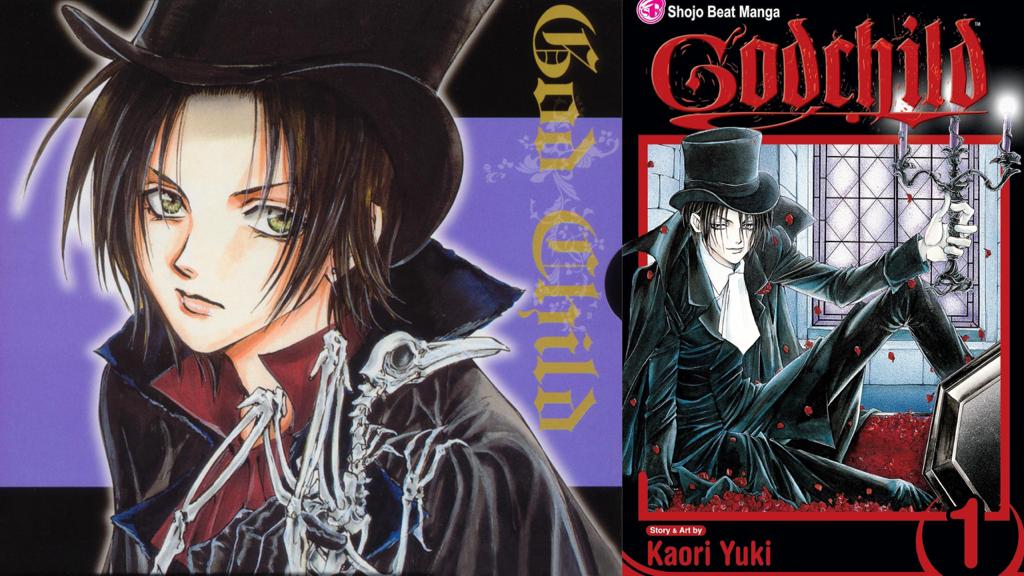 3. Blood on the Tracks

Blood on the Tracks manga is written and illustrated by Oshimi Shuuzou. The Story follows Seiichi Osabe, a middle scholar. Seiichi is happy to lead a normal and happy life with his family and friends. The only thing that is different in his life is Seiichi’s mother as she is very overprotective of him. One day things start to escalate when his mother Seiko Osabe tears off his love letter which was given to him by a girl. Her overprotective feelings towards her son soon progress into horrifying incidents that eventually destroy Seiichi’s life completely. The reason Blood on the Tracks was on the list of Top 10 Best Horror Manga was due to Seiko Osabe’s character, as her portrayal of a disorderly and manipulative mother is very disturbing to read. 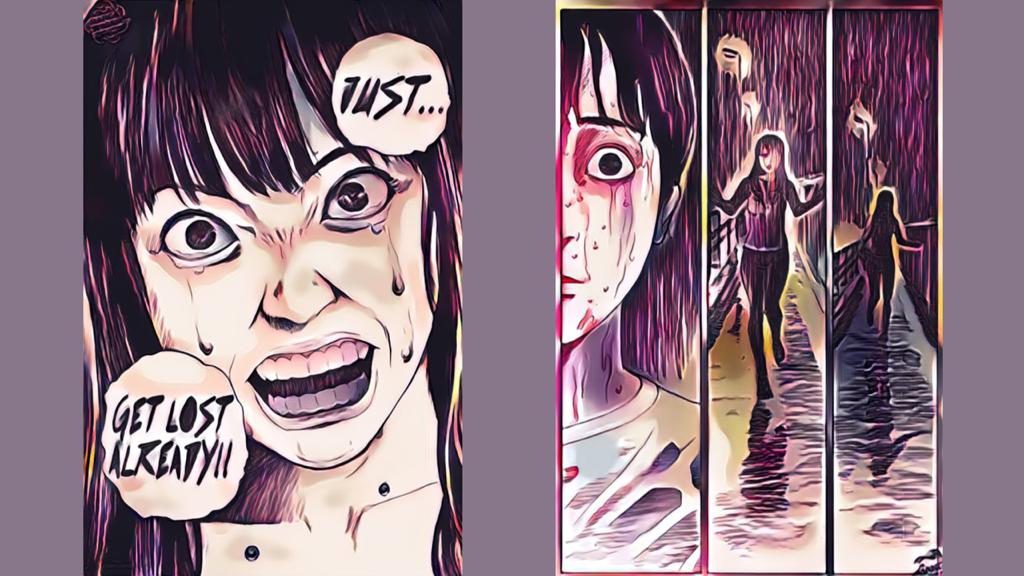 Blood on the Tracks

Shigahime manga is written and illustrated by Hirohisa Sato. The Story follows Osamu Hirota, a high school student. Leading a normal life with his girlfriend was his only goal of Osamu but due to an immortal vampire woman, his life gets shattered into pieces. He is forced to hunt for blood and drink it if not his whole body will take a form of a monster. The reason Shigahime was on the list of Top 10 Best Horror Manga was due to its brutal dark atmospheric situations between each character as they crumble into chaos at night. This is a very addictive manga and one can easily finish this in a day ( I certainly have). 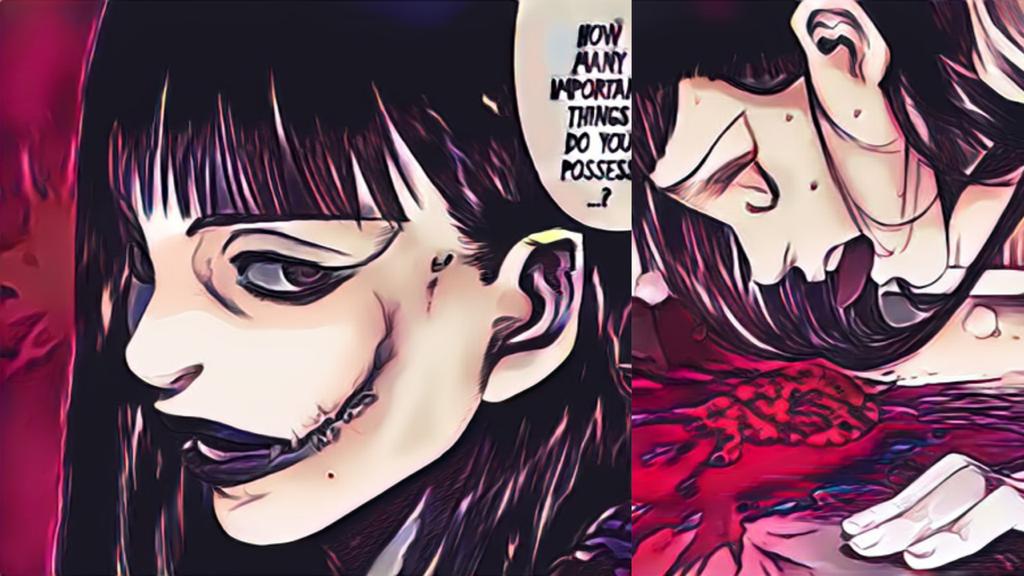 Uzumaki manga is written and illustrated by Junji Itou. The Story Follows kirie Goshima, a high school girl who lives in the town of Kurouzucho. One day everything falls apart in the town when one of Kirie’s friend father Toshio Saitou gets obsessed with spirals inflicted items. True horror transcends when Spirals get inflicted on every living and nonliving thing. The Reason Uzumaki was on the list of Top 10 Best Horror Manga was due to its extremely horrifying artwork and dreadful storytelling. 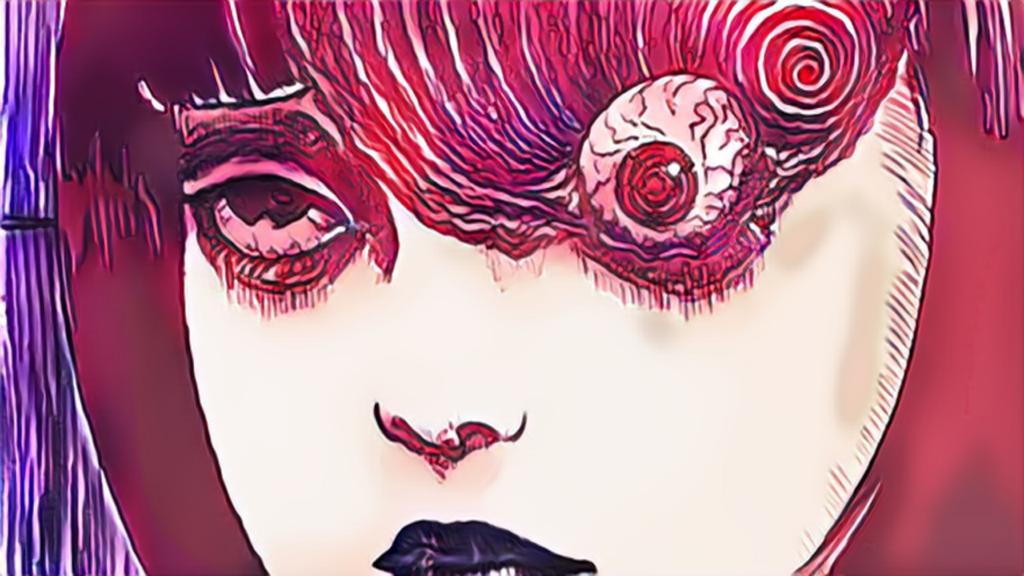 Also Read: 7 Best Mystery Manga That You Should Read