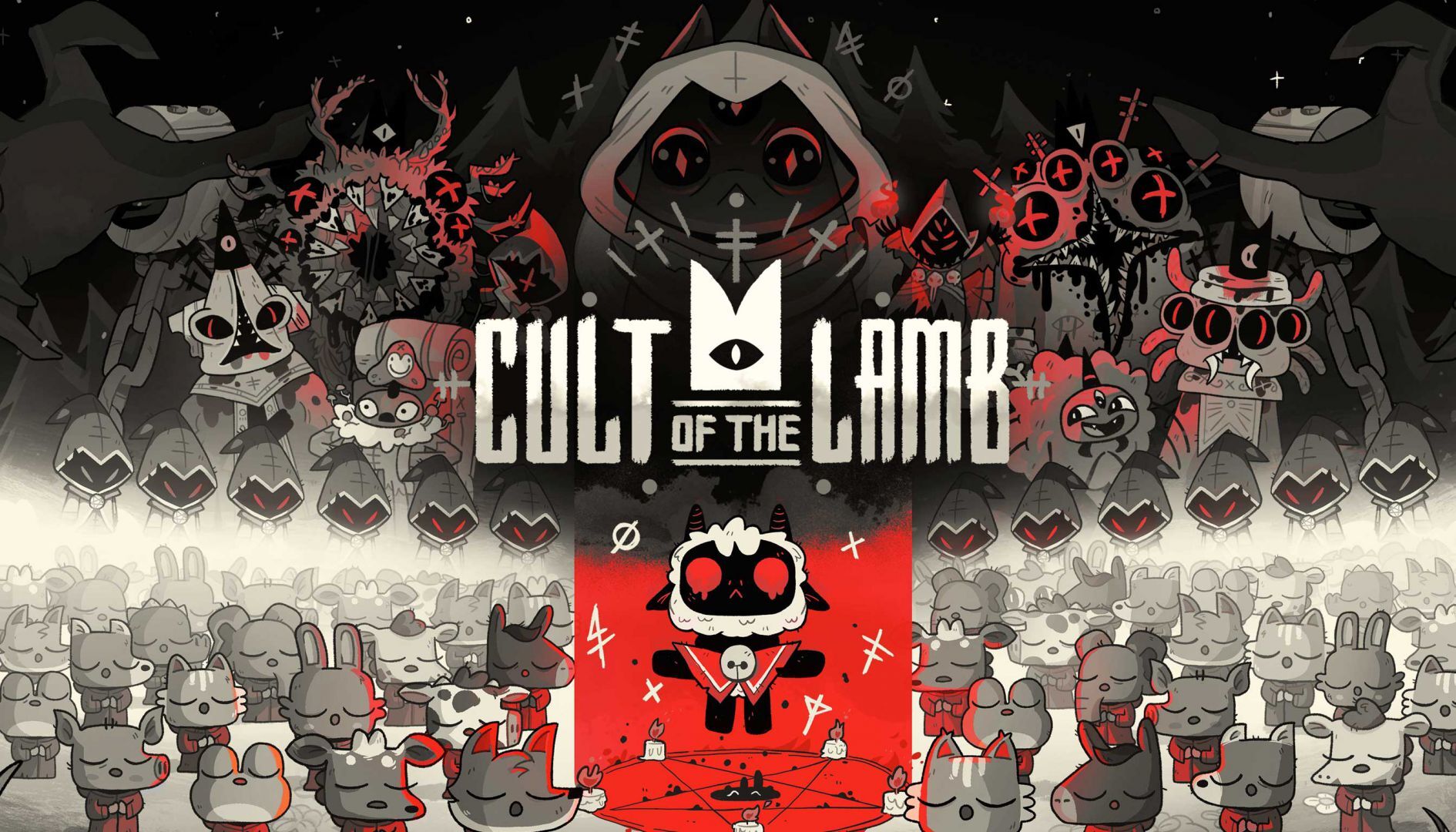 Cult Of The Lamb

Devolver Digital has gained a reputation for releasing games made by studios that think beyond the box. “Cult of the Lamb,” an action-adventure cult simulator, is no exception. If you’ve never heard of it, the title is a hack-and-slash roguelike that draws inspiration from numerous other games in its genre to create something totally original. It was first unveiled back in August of last year. Of course, the first thing you should note is that despite the game’s generally attractive appearance, its internal mechanics are somewhat bizarre.

Cult of the Lamb, which teased a cult building simulator with exquisite 2D visuals set against a 3D environment, was one of the nicest surprise announcements at Gamescom 2021. With support from publishers Devolver Digital and scheduled for a widespread release in 2022, it’s the biggest release by independent developer Massive Monster to date. Cult of the Lamb might just be for you if you’re trying to start your own cult while going out to spread the word and kill sinners.

Cult Of The Lamb Release Date

Cult of the Lamb will be released on 11 August 2022, nearly a whole year after its title reveal back at Gamescom 2021. The game was initially scheduled for release in early 2022 but was later delayed until August. Players won’t have to wait too long to begin building their cult now that they know when the game will release. 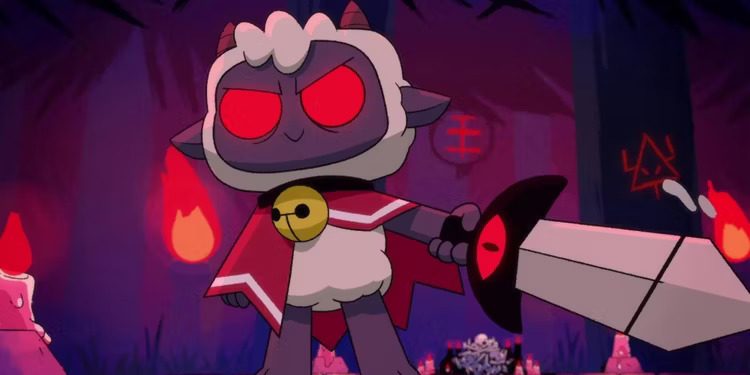 Cult Of The Lamb Release Date

“Cult of the Lamb” is the latest work from Massive Monster, a three-person independent development studio. Before shifting to console and desktop games, the firm got its start in the flash games market. “Never Give Up,” and “The Adventure Pals” two of its earlier works, were released on PC and Nintendo Switch, respectively, with the former also appearing on Xbox One, PlayStation 4, and Series X|S. It will take a lot of time and patience to become the most powerful cult leader, but fortunately for gamers, this game doesn’t require a powerful PC to play.

Cult of the Lamb will be released on the PC, PS4, PS5, Xbox Series X/S, Xbox One, Nintendo Switch, and Steam. So you shouldn’t run out of options for how to play it! To be honest, you really can not ask for better platforms. The Nintendo eShop, PlayStation Store, and Steam all already have product pages for Cult of the Lamb. However, as of this writing, Steam is the only one that allows you to place an order. As an alternative, independent merchants have also begun to post product pages.

Cult Of The Lamb Story

According to Devolver Digital’s official website, “Cult of the Lamb casts players in the position of a possessed lamb saved from death by an ominous stranger and you must pay back their debt by building a faithful following in his name.” Players will need to “form their own cult within a land of false prophets, traveling out into various and exotic locations to develop a faithful community of woods worshippers and promote their Word to become the one real cult”. 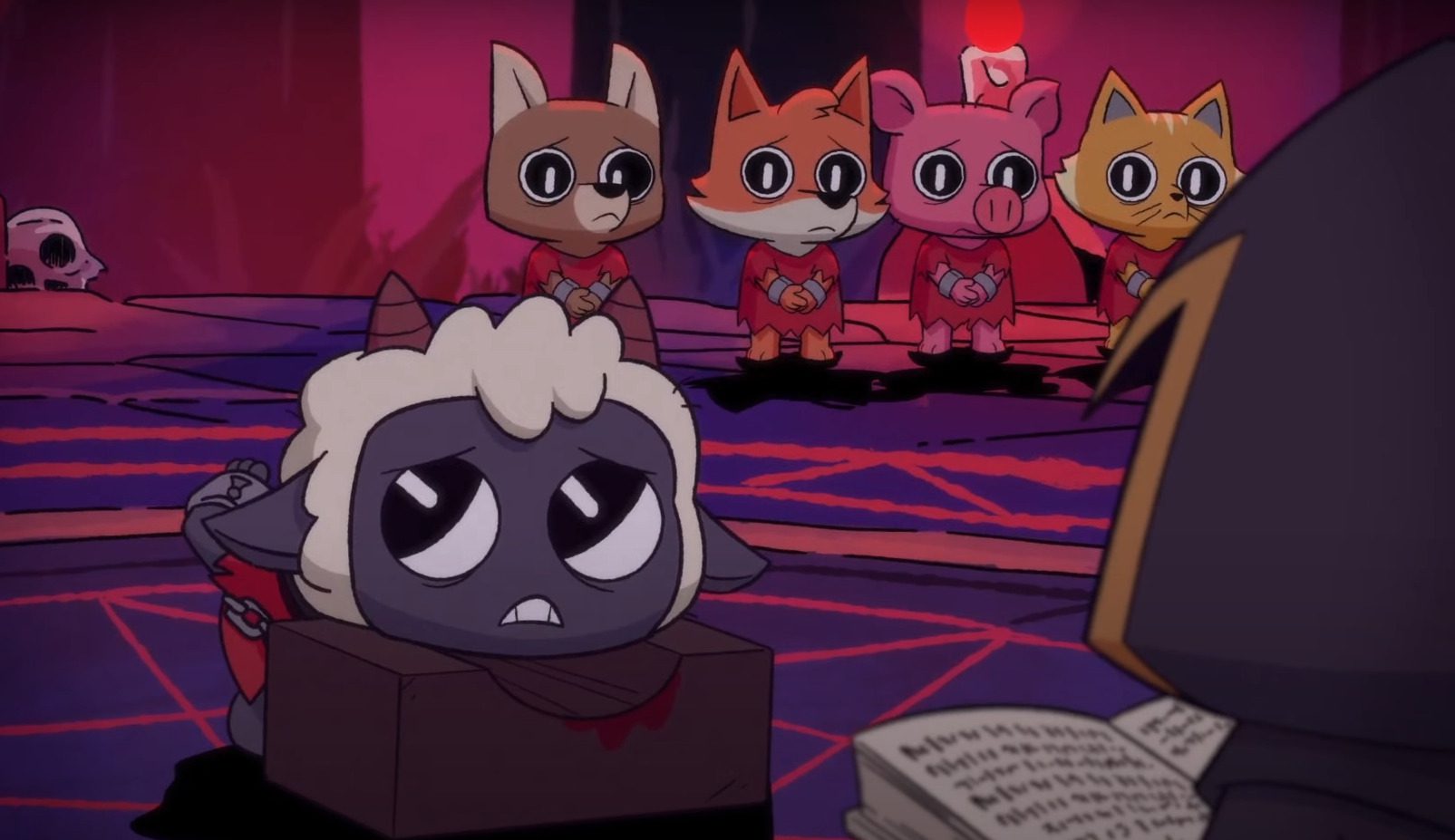 Cult Of The Lamb Story

It looks like you’ll need to create buildings and hold rituals for your cult as well as travel to “a large, randomly generated environment” where you’ll “fight off hordes of opponents and defeat rival cult leaders in order to take in their power and impose your cult’s authority.”

In August 2021, the first trailer for the game was released, displaying a combination of gameplay and cinematics. It started with the main character (a lamb) being beheaded by an unknown group before a God seemingly heals you and gives you the ability to destroy them. As you do this, you also release a number of other creatures, which signals the start of the cult by having them kneel to you. After a few additional scenes that show the cult’s expansion, the game shifts to gameplay that shows warfare, resource collection, and base construction.

A few months later came the release date trailer, which once more mixed gameplay with cinematics. This trailer was a tease for the game’s console release. This one featured rituals, boss battles, and new weaponry that seemed to showcase more of the systems.

Cult Of The Lamb Gameplay

To provide a distinctive gaming experience, “Cult of the Lamb” blends strategy,  action-adventure, and life simulation aspects. You are tasked with creating the titular cult in honor of the stranger who saved your life as the title’s leading lamb. Explore a map that has been selected at random and gathers materials to build things, carry out “dark rituals,” and preach to your followers to strengthen their faith. 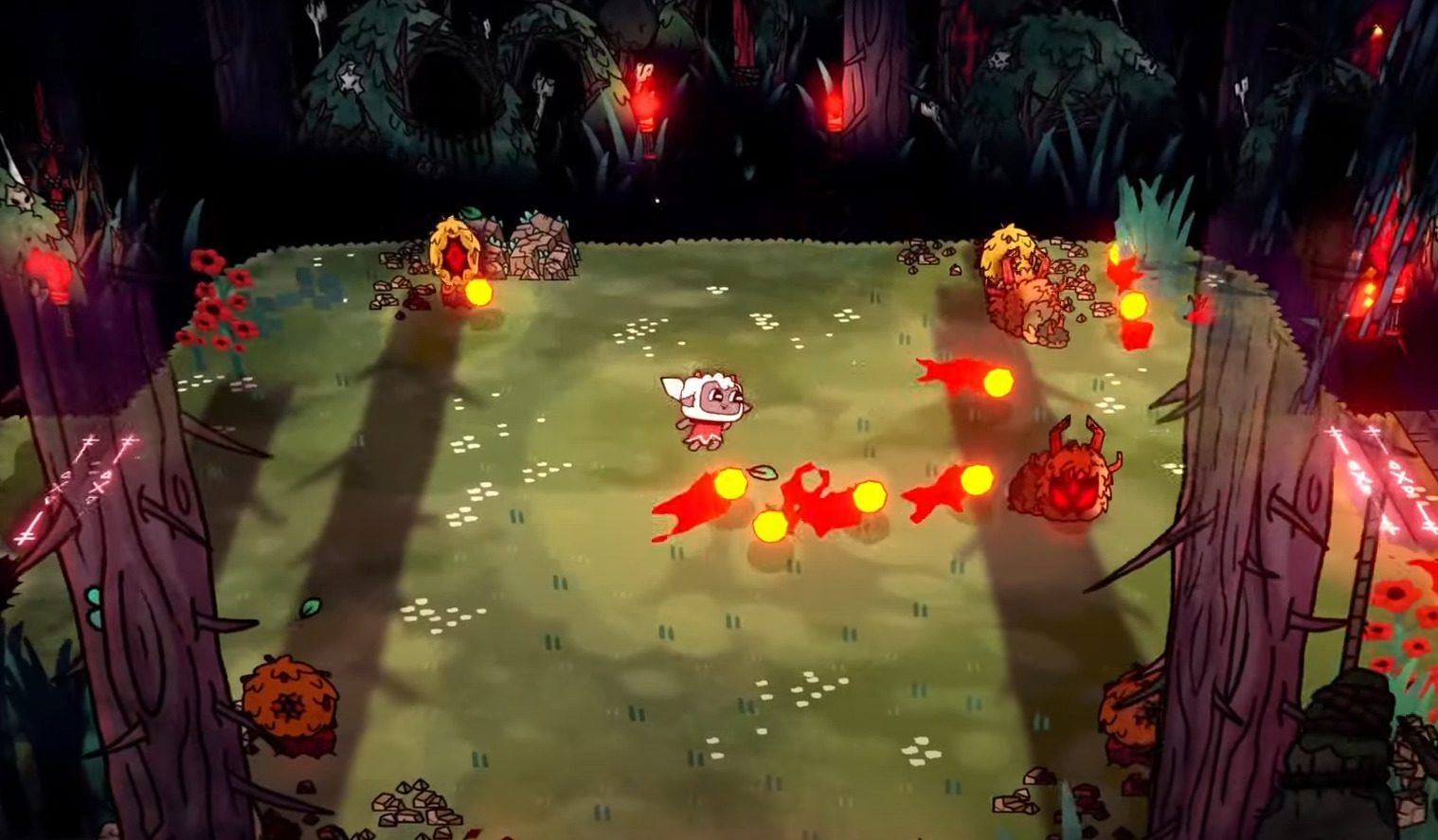 Cult Of The Lamb Gameplay

While building up your base is important, you’ll also run into enemy hordes and “false prophets,” or other cult leaders who need to be exposed for what they are doing. You can take their authority for yourself once you defeat one of these rivals, enhancing the dominance of your own group. As your power spreads, you can shape your flock and work with others to unravel the secrets of the five distinct regions. You’ll require every bit of help you can get to finish your sinister mission.

Be A Cult Leader In Cult Of The Lamb

Nothing is more satisfying than forming a new cult, and Cult of the Lamb may be the perfect game for the job. This independent game features unpredictable locations, dangerous foes, and a cult leader to follow. Whatever your reason, you’ll need to brainwash your supporters. Although Cult of the Lamb is a dark story, millennials will also enjoy it for its adorable iconography. For example, a gigantic tentacled creature is shown entangling a fox in the game’s Reveal Trailer. Sermons from the Lamb in the game have the power to bring doubting believers back to their faith, offer dissidents to the One Who Waits as sacrifices and put troublemakers in Stock Punishment. 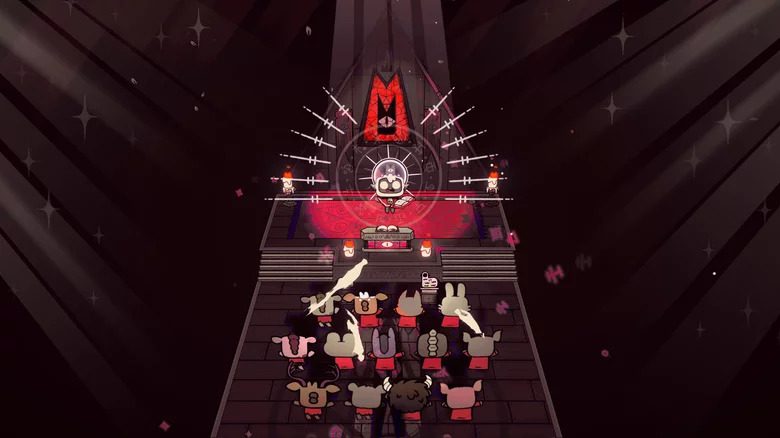 Cult Of The Lamb – Be A Cult Leader

It’s really challenging to control a cult. Once you’ve recruited new members, you can give them assignments like gathering supplies or performing rituals at the main shrine. If you are able to keep your community clean, the cult architecture will be self-sufficient and simpler to maintain.

The game includes managing colonies in addition to dungeons. Be sure to take advantage of the opportunity as a new exploration run will bring the cult more resources and followers. You can engage in more activities as your cult develops and spreads, such as resource extraction, brainwashing, and the establishment of missionary outposts. You play a possessed lamb in the game who needs to assemble a devoted flock and spread the message about “The One Who Waits.” As your flock expands, you can invite more animals to join it, which will increase the size of your following.

The gameplay of the game mostly relies on managing your followers, therefore, mastering it is necessary for success. You’ll need to collect resources, construct temples, brainwash new members, and indoctrinate followers as well. Along with managing their everyday routines, you’ll also need to preach. This game combines cult management and roguelike combat in a semi-rogue-like setting. You can customize the appearance of your cult using the administration meta-systems in the game. Additionally, you have control over how much power your followers receive for performing side quests and other tasks. 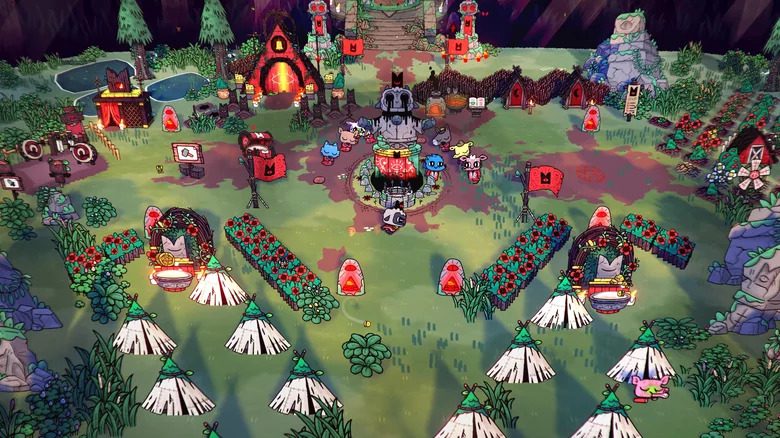 Cult Of The Lamb – Manage Your Followers

You must be a kind leader who can gather supplies, construct homes, and handle a variety of tasks. If they are not fed or kept happy, they will become resentful. The game’s city-building aspect is comparable to Fire Emblem Fates’ checkpoints. To find out how your followers are doing, you must check in with soldiers. To increase your followers’ power, you can give them missions and lectures. Both your reputation and the number of followers you have in the game’s community can be managed.

The balancing act in the game is similar to a management sim rather than a roguelike. You’ll gather supplies, enlist new followers, and ultimately assassinate the ruler of the area. In order to survive, you’ll need to gather supporters. This is where your plan will be useful. A high amount of influence will make it simpler for you to win over new supporters, acquire resources, and silence critics. The game is a fantastic simulation that focuses on controlling a variety of different meters. Fortunately, Cult of the Lamb informs you when anything is wrong and foretells the results of doing nothing. You can plan appropriately and prevent major failure by paying attention to warnings.

You must educate your flock, spread wisdom, and purify your enemies if you want to receive rewards at a high level. If you win a battle, you’ll receive gold as payment for your victory, which is the prize for devoted supporters. However, you shouldn’t worry because you can always upgrade your weapons afterward. Even your swords and other weapons can be transformed into common objects. You will have lots of gifts to provide if you are a true cult leader. 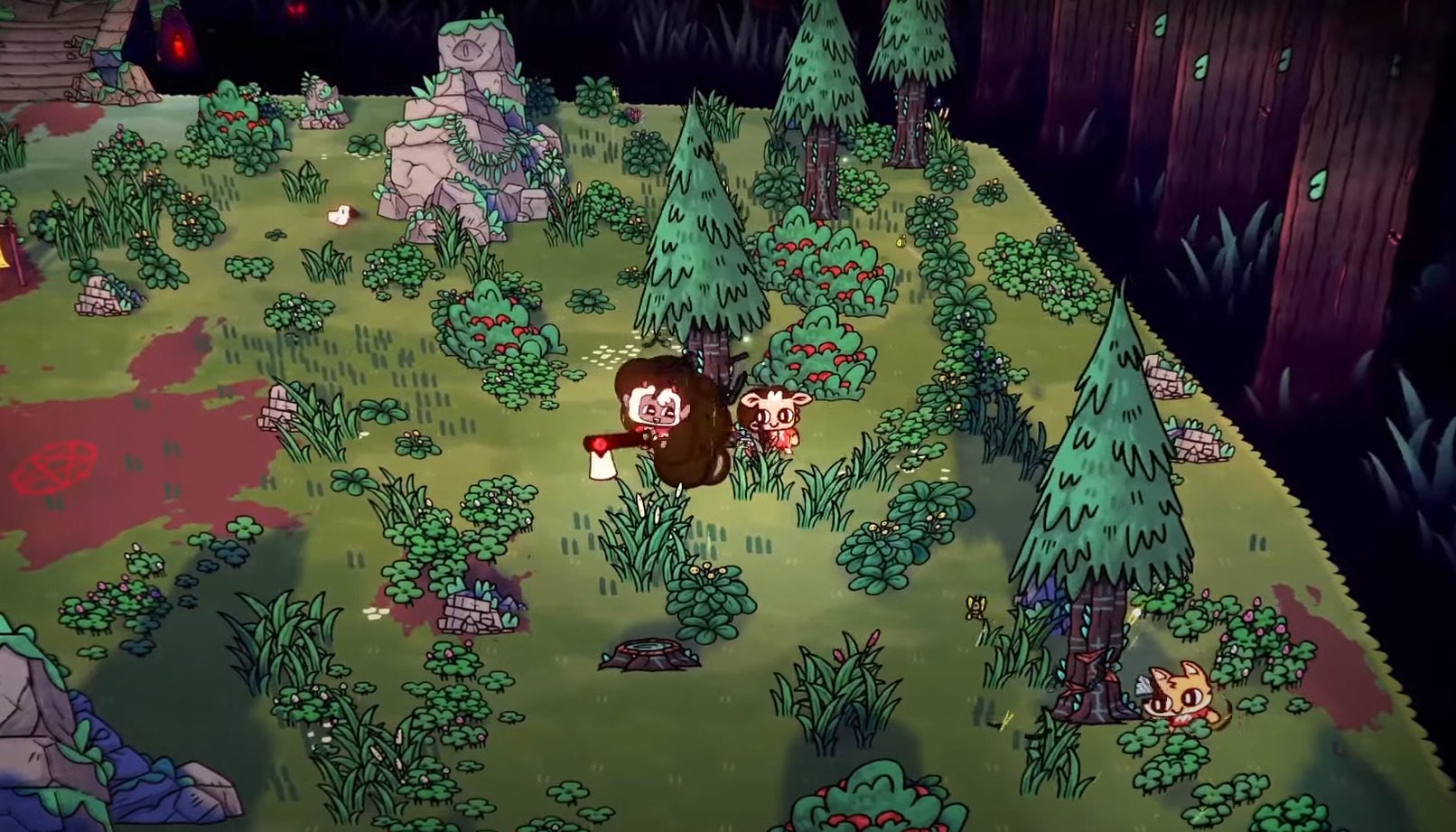 Cult Of The Lamb – Collect Resources

Cultists can be found all across the game. During the Lamb’s sacrifice, you’ll also run against anonymous cultists. The cultist who cuts off the lamb’s head has a wolf-like snout and ears, but their faces are covered by hoods. The cultists in the game are common enemies that don’t appear to be specific to any one biome. According to the creators, they sought to make cultists independent of particular biomes.

Also Read: Out Of The Furnace Ending Explained: Why Was Russell Free?