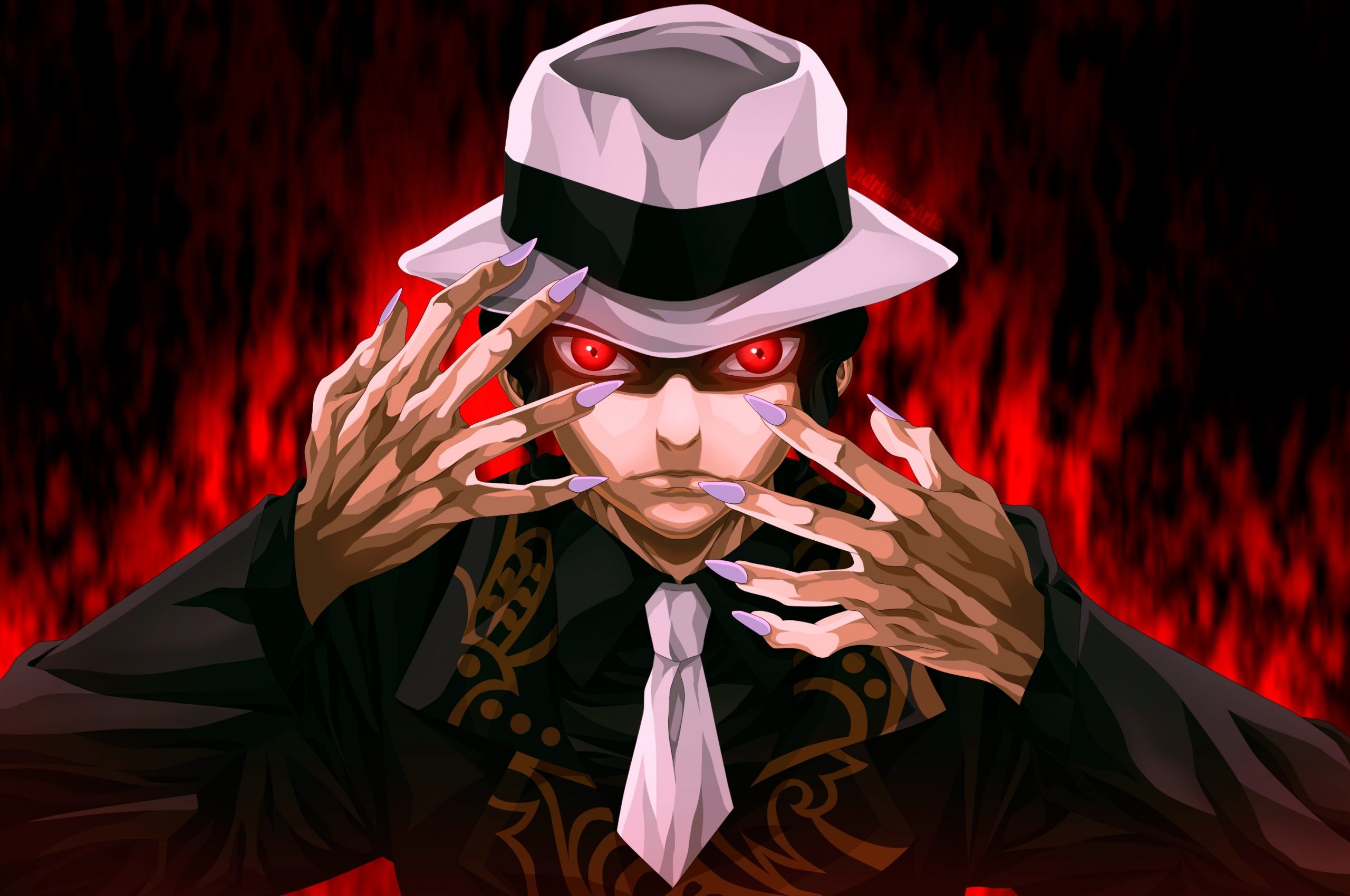 Demon Slayer Kimetsu no Yaiba On February 14, 2021, a new season of Demon Slayer with the working title Demon Slayer Season 2 “Kimetsu no Yaiba Entertainment District Arc” was revealed. It is based on the manga of the same name by Koyoharu Gotouge. The project will be directed by Haruo Sotozaki, as it was in the previous season, with character designs by Akira Matsushima and animation by Ufotable. In this article, you will know about the top 15 Muzan Quotes. So let’s get started.

In Demon Slayer: Kimetsu no Yaiba, the main antagonist is Muzan Kibutsuji. He is the Demon King, the first of his kind, and the forefather of all demons. Muzan is also the leader of the Twelve Kizuki, a group of the world’s most powerful demons who answer to him directly. Muzan has transformed into a demon a millennium ago while attempting to cure his terminal illness, and his goal has been to live without fear of death and become truly eternal since then. He intends to accomplish this in two ways: by tracking down the Blue Spider Lily or by creating more demons in the hope that one of them will one day be able to overcome their sensitivity to sunlight.

Muzan, as Demon King, has complete control over all those who have assimilated his blood to become demons, with the exceptions of Nezuko Kamado, Tamayo, Yushiro, and later Chachamaru. Muzan is of the same bloodline as the Ubuyashiki Family, it is later revealed. Muzan is a cold-blooded killer who is ruthless, intimidating, and extremely intelligent. He has little regard for his subordinates and sees no value in any human he has met. He is rarely seen upset or happy, and most of the time, even when murdering his subordinates, he appears completely monotone and detached.

His facial features are exaggerated in the manga to make him appear more expressive, especially when he is enraged (possibly as a way to display his normally unreadable emotions). In the anime, his expressions change slightly, but his voice tone remains nearly constant, emphasizing his monotonous demeanor. Many demons admire him because of his imposing and cruel nature. Let’s look at Muzan Quotes that you should know as a Demon Slayer Kimetsu no Yaiba fan.

15. “People who are dead never come back to life. Instead of sticking to such things, why don’t you just work for dairy money and live quietly?”

Muzan’s cold words enraged Tanjiro by insulting his victims and their families. Muzan is cold-blooded, ruthless, intimidating, and incredibly smart. He brutally murdered a pair of drunk men for being rude to him and their female companion for doing nothing, all while proclaiming his perfection and superiority over them, displaying his pettiness by refusing to accept any humiliation and will do whatever he wants until the humiliation is removed. 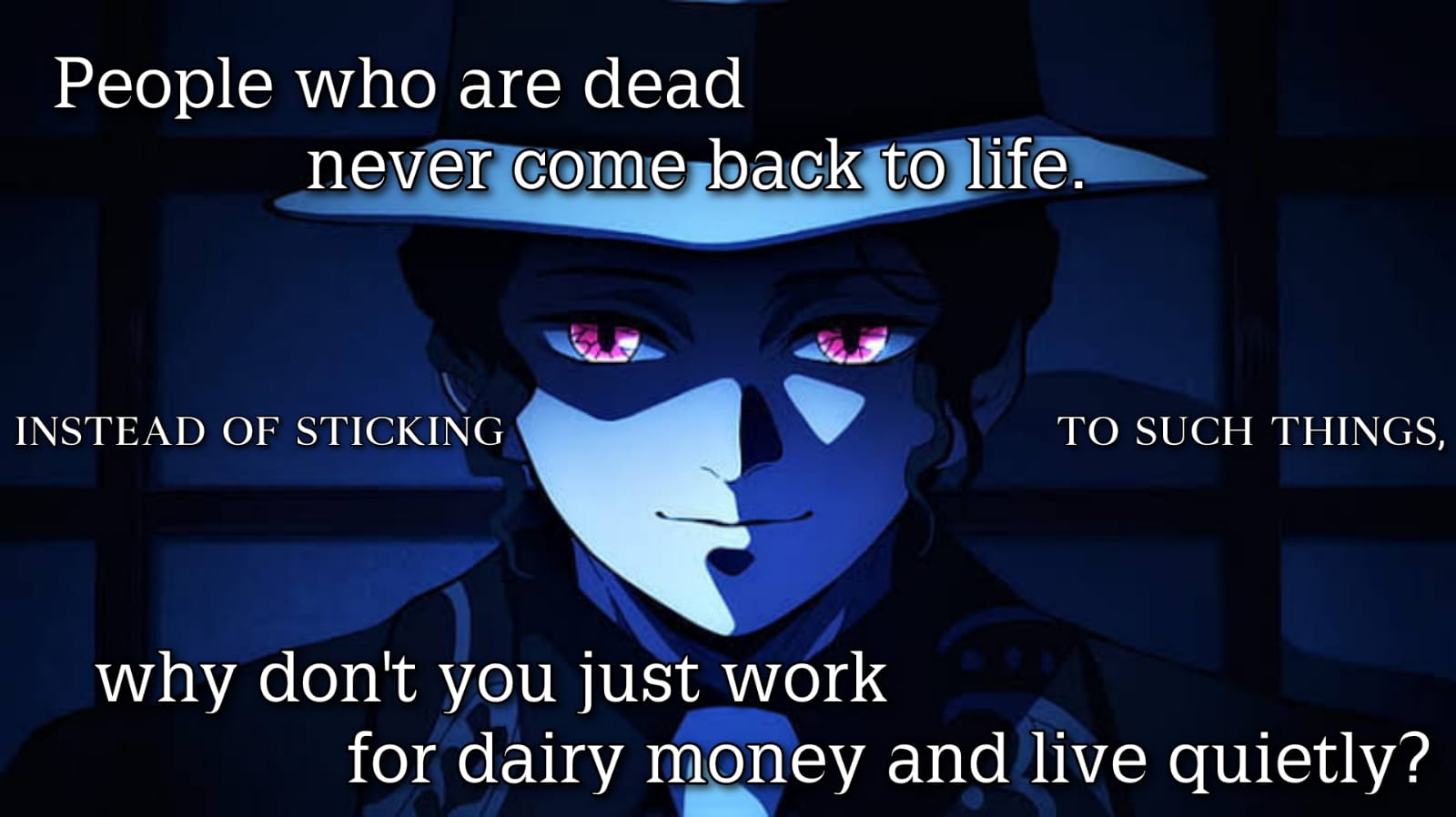 Muzan only saw insults and threats in it, which only adds to his hatred for humanity and the Demon Slayers. He also believes that because he has never seen a God or Buddha, Heaven has absolved him of murdering thousands.

Before transforming Michikatsu Tsugikuni into a demon, he made this offer to him. Tsugikuni was a fantastic swordsman who chose to become a demon under Muzan’s influence and became known as Kokushibo.

Michikatsu was persuaded by Muzan Kibutsuji to become a Demon, taking the name Kokushibo after being frustrated by his inability to surpass his brother and fearing the fated death of those who awakened their Demon Slayer Marks. He took three days to fully transform into a demon because he was also a Breathing user. 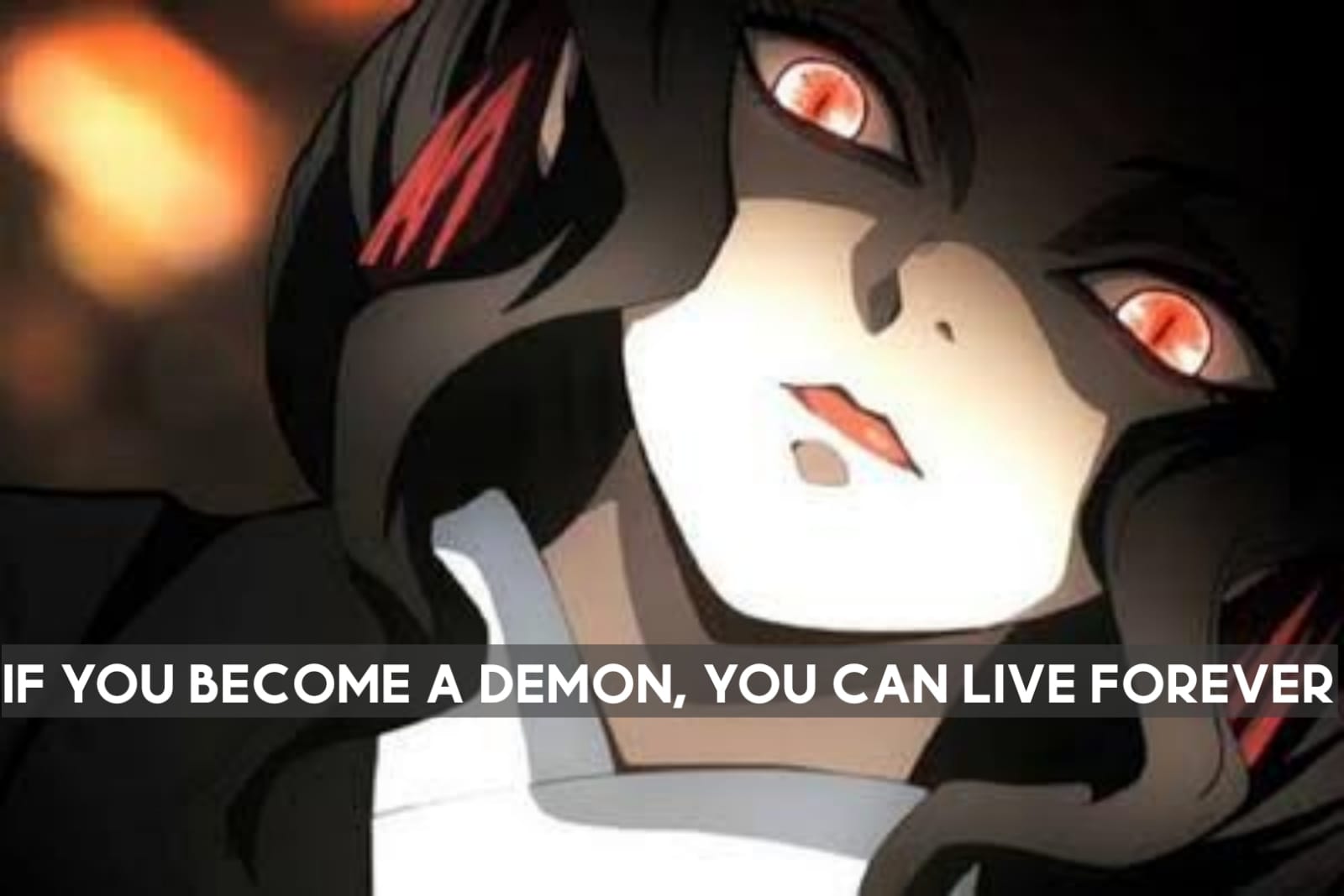 13. “Nobody was useful. I will smash the Demon Slayers tonight. I will kill them all”

To deter Tanjiro, Muzan created a distraction by transforming a young man into a Demon, but not before Tanjiro declared his intention to pursue Muzan to the ends of the earth to kill him. Muzan, enraged by his threats, would send multiple Demons to kill Tanjiro throughout the series, including Yahaba, Susamaru, and Enmu. 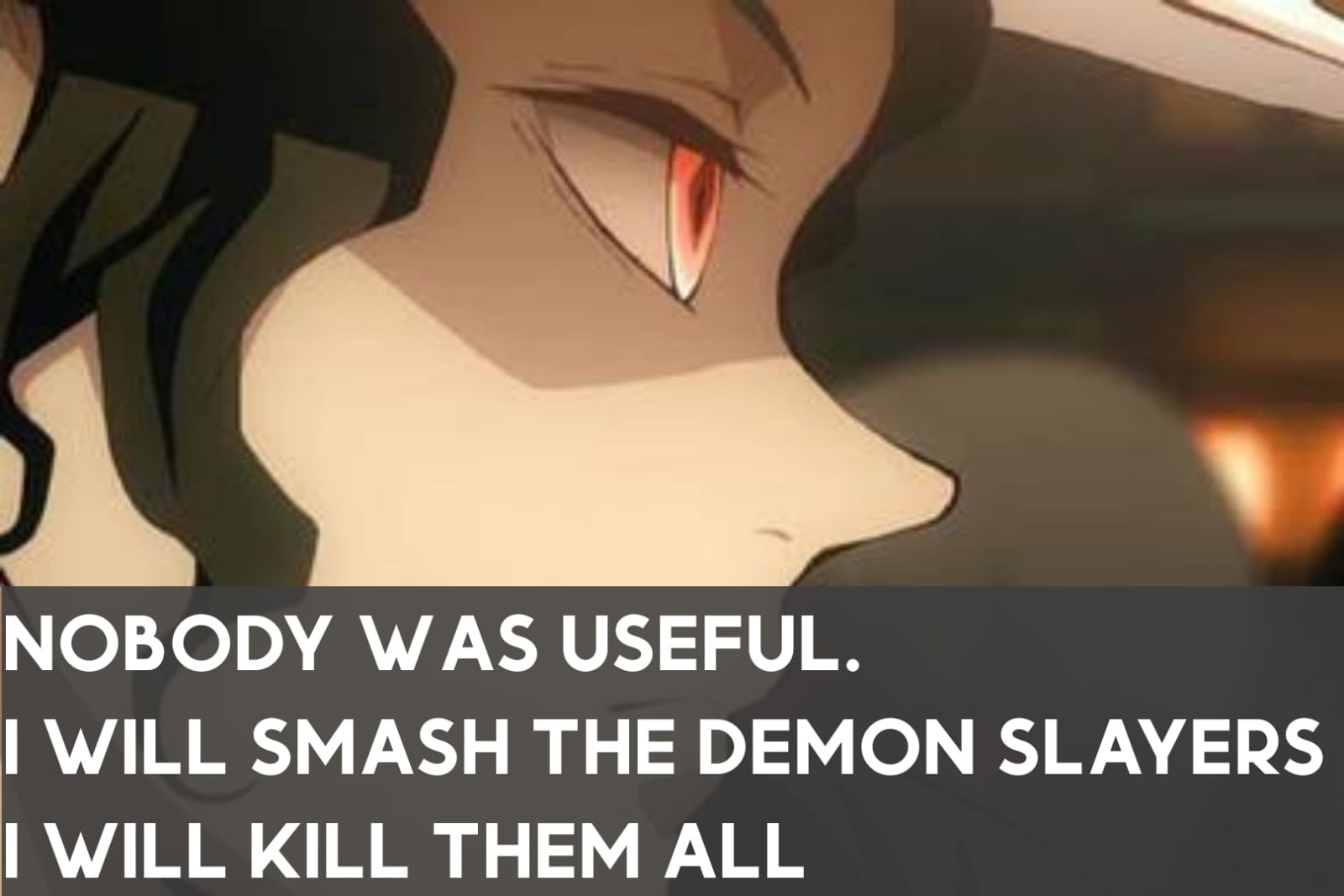 12. “You look ugly. Tanjiro Kamado, we can’t tell which one is a demon anymore. You make me sick”

Tanjiro sustained serious injuries while fighting Muzan, but he remained defiant. Muzan made fun of Tanjiro, calling him ugly and weak.

Muzan, who has a terrible facial burn, reveals that he injected his blood into Tanjiro during his previous attack and that his body will be destroyed, boasting that he is already dead. 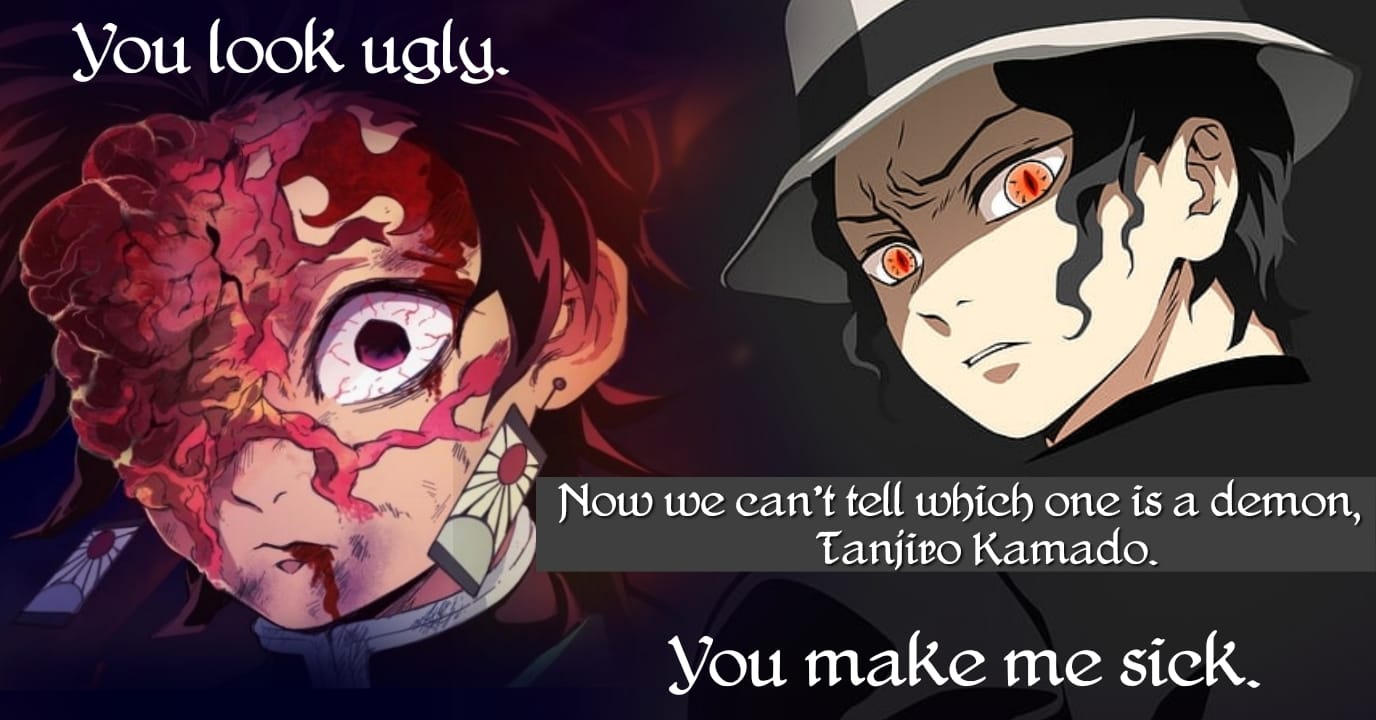 11. “Only feelings are eternal and undying. That is true. I have no recollection of killing a single human being.”

Muzan is a cold-hearted, ruthless, and intimidating character. He had killed far too many people in his lifetime. He felt no guilt or shame about it and even brags about it at times.
He’s extremely violent, heartless, and the type of person who will go to any length to achieve his objectives.

10. “So what if you only got rid of one Hashira? As if that were such an accomplishment.”

Muzan is ruthless and unforgiving. Battling and defeating a formidable foe meant nothing to him if the goal was not met. Azaka, who was congratulating himself on defeating the flame Hashira, was put in his place by Muzan’s words.

9. “A foregone conclusion that a demon will beat a human.”

Regardless of who the human was, a demon’s hunting and killing was a common task. Muzan was annoyed that Akaza was congratulating himself on defeating the Flame Hashira because to Muzan, he was just another worthless Human.

8. “I haven’t got any punishments. I’ve been freed of the murder of hundreds of thousands of people. I haven’t seen God or Buddha for a thousand years.”

Muzan had killed hundreds of thousands of people in his thousand years on the planet. He believes Heaven has absolved him of the responsibility for the deaths of thousands because he has never seen a God or a Buddha.

Muzan is never satisfied with simply defeating one Hashira. Muzan’s favorite character, according to the official fan book 1, is Akaza. But even Akaza finds it difficult to please his autocratic boss. 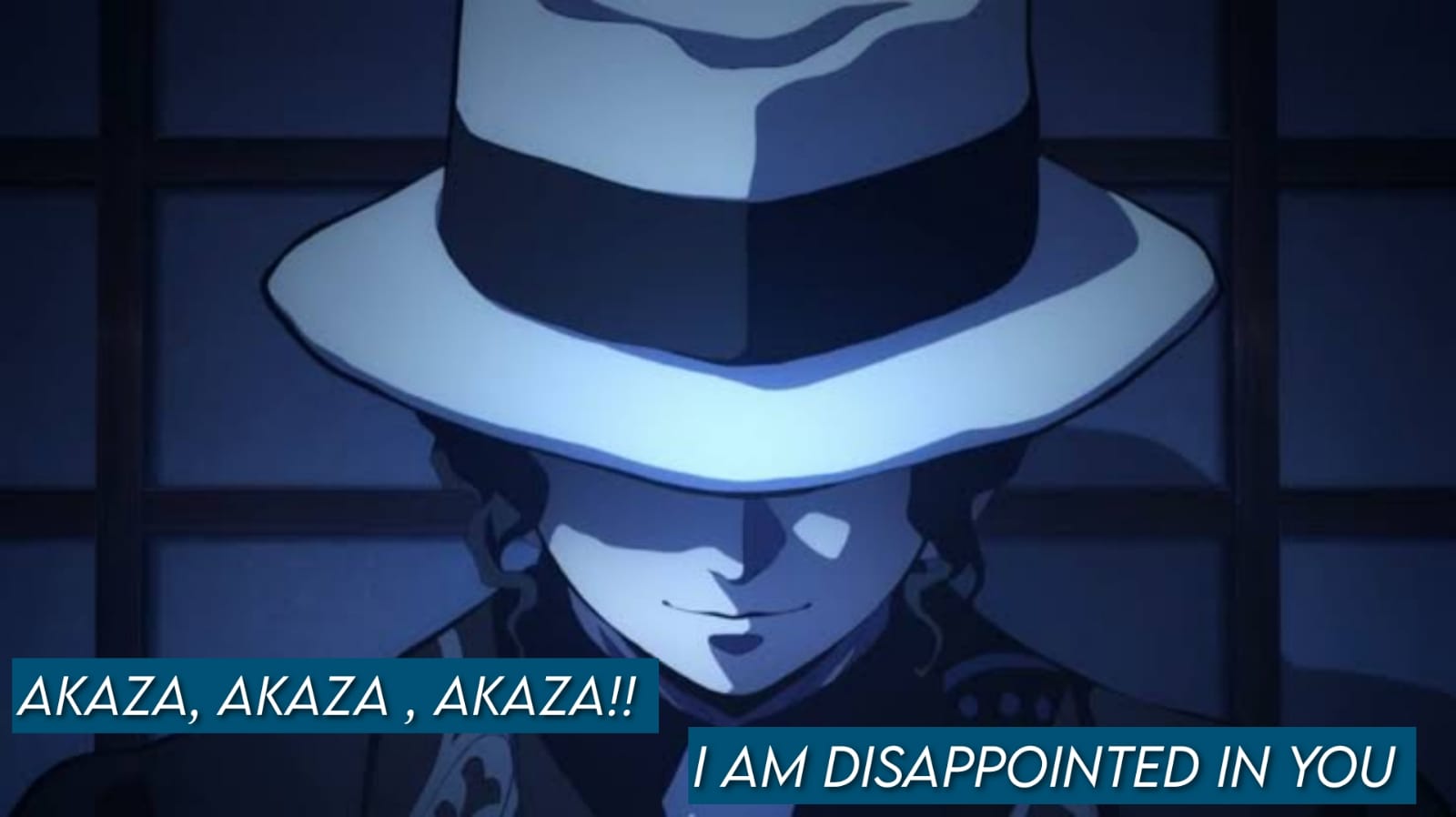 Muzan inquires as to whether Akaza has discovered the Blue Spider Lily, but the demon admits that he has not. He then assures Muzan that he has executed the order to kill a Hashira. Muzan, on the other hand, is unimpressed, wounding the demon and claiming that Akaza was unable to kill three other slayers. As a final blow, Muzan expresses his dissatisfaction with Akaza and orders him to leave. The humiliated demon then vents his rage on Tanjiro’s sword, destroying it and vowing to assassinate the young Demon Slayer.

Yoriichi was Muzan’s archenemy. Yoriichi had been dead for a long time, but his face reappeared in Muzan’s blood memory after Tanjiro reawakened his Demon Slayer Mark, reigniting Muzan’s fear. 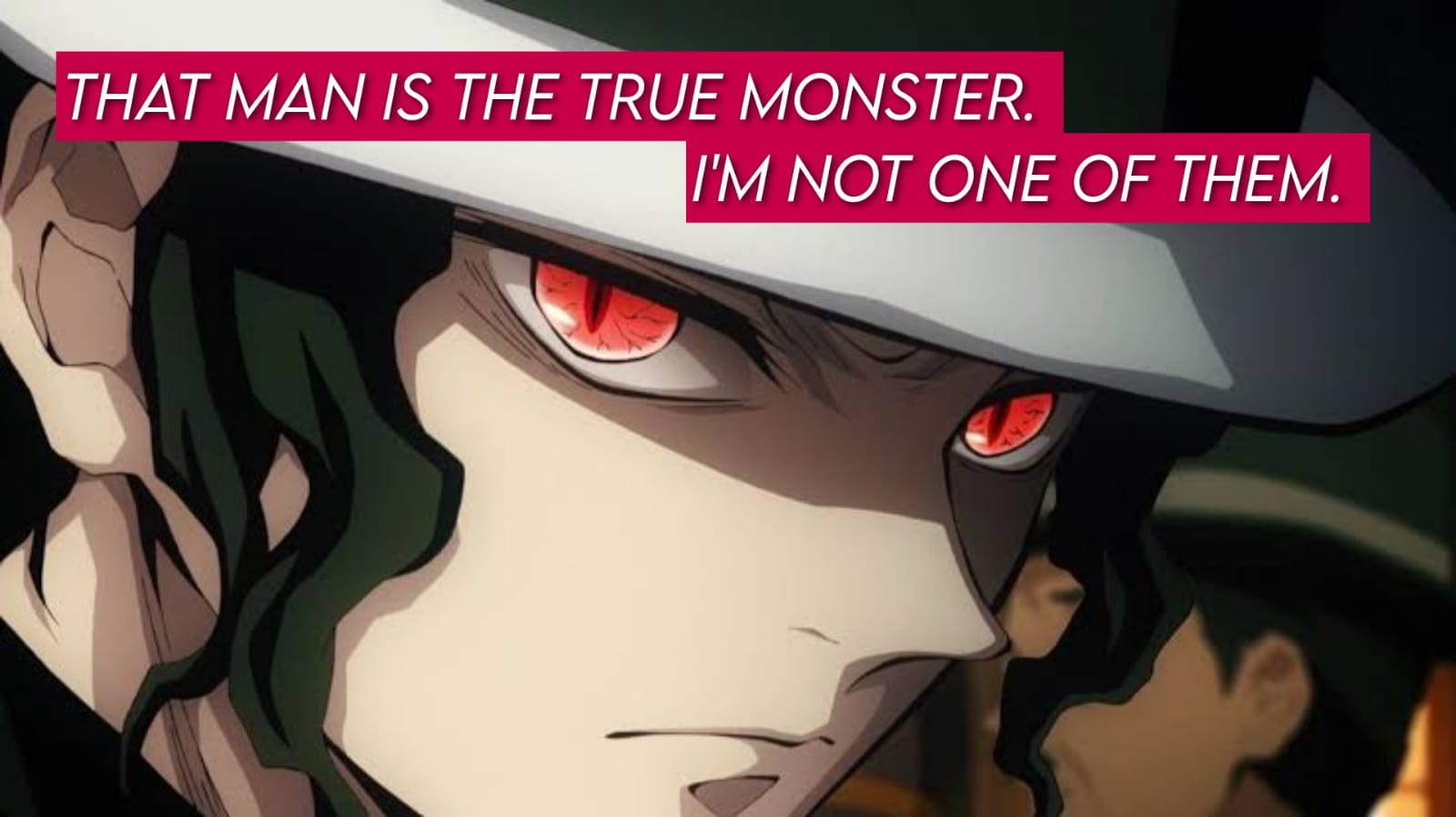 When Tanjiro asked him about Muzan, Numa no Oni became extremely terrified. Muzan is terrifying to demons.

The Demon Slayers irritated Muzan because they continued to attack him in any way they could. 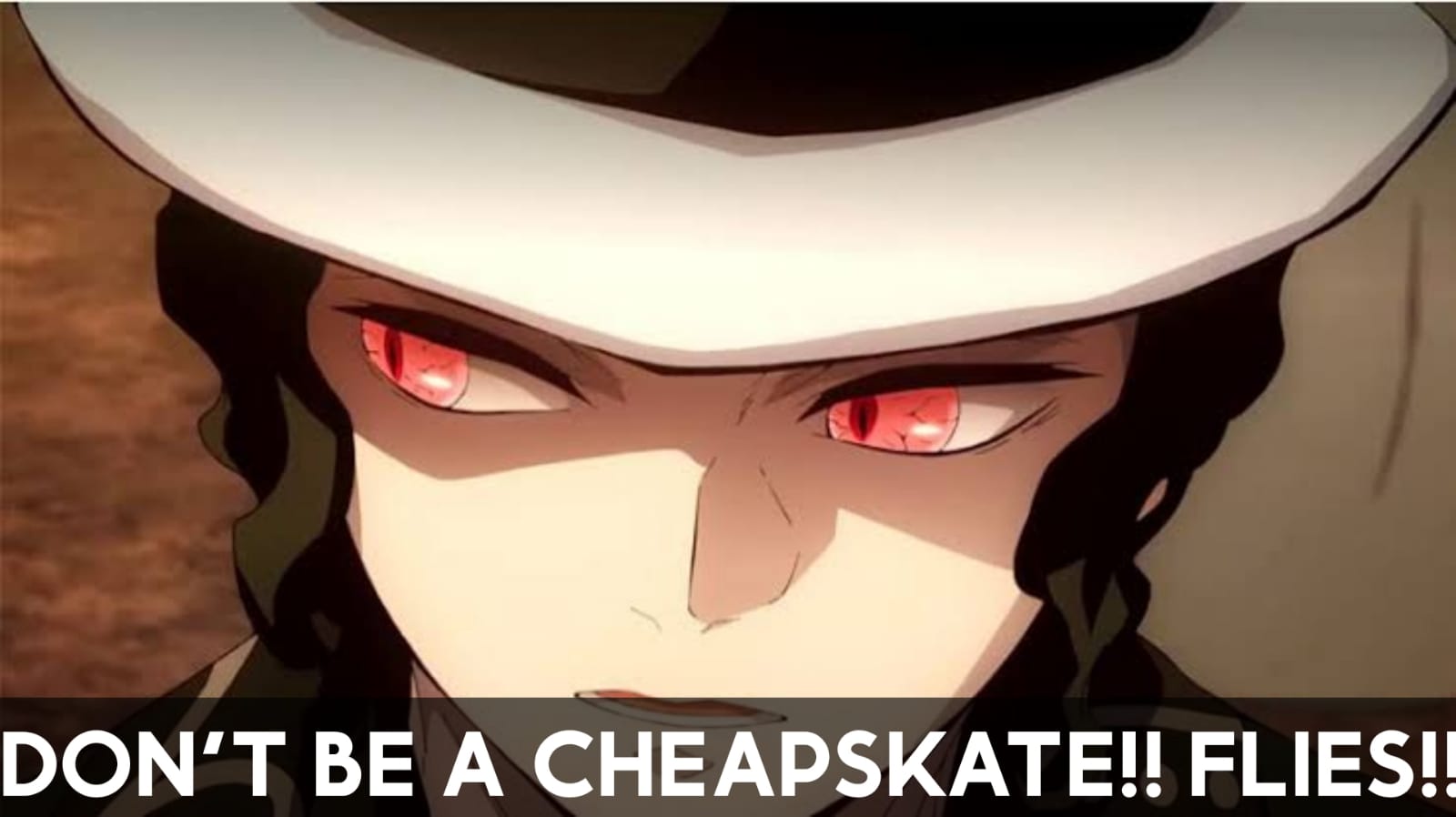 2. “Head down and kneel. Prostrate before me.”

Muzan summoned the Lower Moons to his base, Mugenjo hearing Muzan’s voice made them stiffen their bodies. Muzan is the absolute existence they can never resist. Every demon born from Muzan’s blood is cursed with a deadly curse that activates if they reveal any information about him, most commonly by saying his name in the presence of Demon Slayers. Demons such as Tamayo and Nezuko, on the other hand, have broken free from the curse.

According to Rokuro, the Lower Moon Rank 2 Demons are not allowed to deny Muzan’s words or speak their own. Muzan also can read the thoughts of demons. If he doesn’t like them. They deserve to die. 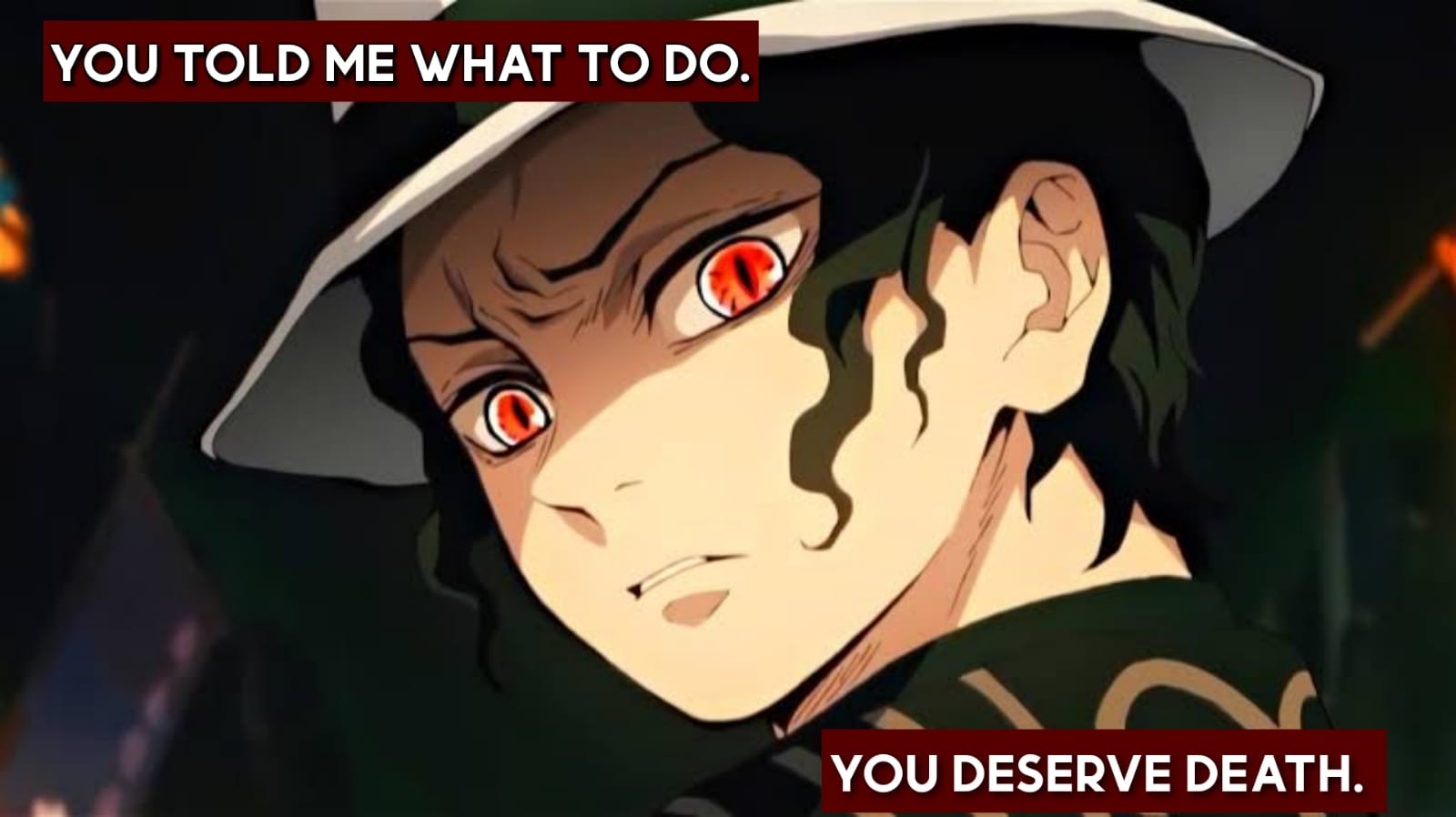 This curse can only be obtained by ingesting Muzan’s blood. Power appears to be easy to avoid, but for demons, it is both intoxicating and terrifying. Many people follow Muzan because he wields great power; they don’t want to jeopardize their lives, so they obey his orders.