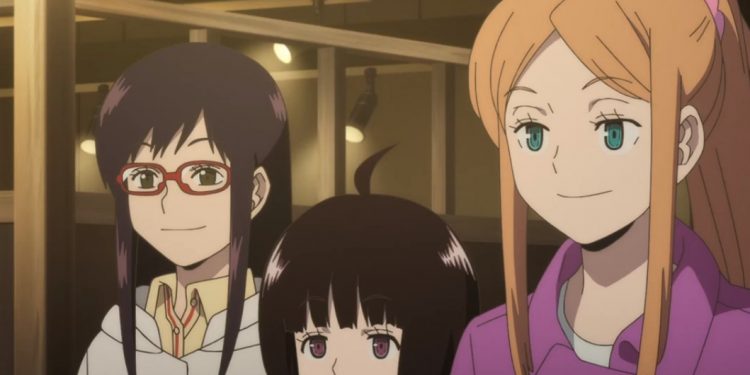 World Trigger Season 3 Episode 9 reveals Tsuji’s arrival as the Border welcomes him. The girls tease him, and the boys notice that Tsuji is afraid of the girls. Shiori and Chika try to hug him, but one of the girls tells the two not to mess with Tsuji since he is helpless. World Trigger-Season 3 reveals the journey to the Away Mission after Hyuse joins Tamakoma-2 to help them achieve their goals. From World Trigger Season 3 ‘s latest episode, Osamu admits that Tsuji has trobles talking with women.

Konami tries to charm Tsuji, but one of the boys reminds her that she hates it when boys try to hit on her. They both decided to enjoy dinner together as a welcome party for Tsuji. Shiori talks with Chika about the orders. The crew realizes that they don’t have to order expensive stuff, but they must have their favorite dish. They enjoy eating food and realize that soon they will be up for another mission. Osamu also had his say about the food they chose, and everyone enjoyed that. The girls wonder why Osamu has no trouble being around girls.

Konami believes that it is because he has a beautiful mother, and beautiful ladies don’t scare him. Osamu is the only boy sitting with three ladies at the same table, and the rest of the boys are on the other side. Tsuji is shy and wonders if they will tease him again. Osamu thinks about his mother and realizes that he has never met a woman with more intense than his mother. But other boys believe that it depends on how one was raised. The girls notice that Chika loves rice, and she has already finished more than five bowls of rice.

Chika believes that nothing is tasty than plain rice, but Shiori gave her more meat to make her rice tastier. The boys don’t have problems when they talk with Hyami since she is adapted to any circumstance. But they realize that the only girls that Tsuji can talk to are Hyami and Hatohara. Tsuji reveals that Hatohara was nice from the start, and he gets comfortable when he is around the two. He knows that Hyami and Hatohara will defend him when girls try to toy with him. Hyami gets angry when Tsuji praises Hatohara and forgets about her.

Tsuji explained why he praised Hatohara and that he first had a wall when it came to Hyami, but she is also lovely. Hyami is glad that Tsuji said something about her. She gives Hyami more food, and the boys wonder if Osamu has ever heard about Hatohara. They also reveal that Hatohara is the Sniper, and Osami agrees that he knows her. Usami and Konami are unaware that Azuma and the others had consulted Tamakoma-2. Konami and Usami want to know about that. Hyami talks about having a barbeque before Hatohara left.

Tsuji thinks that it will be best and it will be for Inuka’s birthday. Hyami wonders how Inuka will go there with civilians. Tsuji thinks that she can’t since she is the Border agent. Osamu notices that Tsuji and Hyami get along when they talk together. He asks them why she wants to go there, and they reveal that her little brother was kidnapped just like Chika’s. They also reveal that she wants to join the Expedition to find her brother. Unfortunately, she was not selected. Komi wonders if it was because she could shoot well. Later Osamu thinks about Hyuse’s battle tactics.

World Trigger-Season 3 Episode 9 will be released on 5 December 2021. Kuga and Hyuse think his tactics are not a problem since they can score using Viper against the other Squads. Kuga thinks that Osamu wants them to use the trick. But they can come up with another plan against Ninimiya Squad. Osamu accepts that and realizes that it will work for Tamakoma-2. Let’s look at World Trigger-Season 3 Episode 9 official details.

You can watch World-Trigger Season 3 Episode 9 online on Anime Digital Network & Crunchyroll on Sunday at 1:30 AM JST. You can also watch World Trigger-Season 3-Episode 9 online on Youtube Channel & VRV via Crunchyroll. Chika reveals her past and that no one believed her in what she saw, but her friend believed her. Her friend went missing and decided that she would find her someday. Chika also remembers when she was allowed to join Tamakoma-2, and Osamu and Kuga will correct her errors. Let’s meet when World Trigger-Season 3 Episode 9 is released.