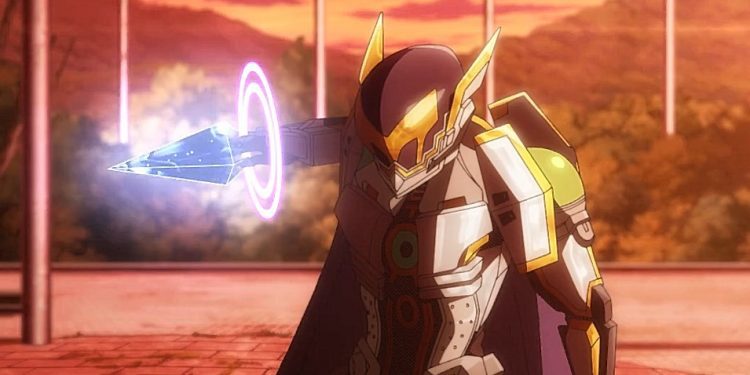 Platinum End Episode 14 reveals White vs. Red after Metropoliman decided to remain since his allies had abandoned him. Metropoliman told Mirai that it would be his White Arrow vs. Mirai’s Red Arrow. Mukaido realizes that it is a fair fight, and Metro asks Mirai if he is ready to take on 1v1. Platinum End has returned after delaying its previous episode. In the recent episode of Platinum End, Mukaido is glad that Metro did something that sounds like him ever since the battle has begun. Mirai has accepted the challenge, and Metro talks about the rules they have to follow during their duel.

Other God Candidates thought Metro was fooling Mirai and told Mirai not to accept the challenge. Metro told Mirai that he could decide on the rules since no one trusted him. Mirai reveals the rules they will use, and Metro agreed to fight on those conditions. They know that it will be a battle without holding back or trying to escape, and they have to attack each other while dodging only. Metro thinks that an idiot has come up with something good. They land on the ground and decide to fight there since they don’t want to involve other God Candidates.

Mukaido reminds Mirai to shoot Metro with Red Arrow and land the final blow. Mirai believes that he can handle Metro and he will kill him. Metro’s Angel thinks that the amusement park is not the place to settle the scores. Metro told her to mind her business since he knew what he wanted to do. He took a coin and said that he was Tail and Mirai was Head, and it would be decided who would attack first.

Metro tossed the coin and pulled one of the old tricks in the book. He attacks Mirai before the coin lands on the ground. Fortunately, Mirai deflected the attack before getting hurt. Beret and Ravel were impressed by Mirai’s reflexes. Metro withdraws his White Arrow and reminds Mirai that he is exercising. He told Mirai that it was his time to attack, but they could attack each other at a distance of five meters. Mirai follows the rule and shoots Metro with the Red Arrow. But Metro surprised him and sent that arrow away. Mirai was surprised that Metro did it differently from him.

Metro explains why his defense is different and tells Mirai that he is sure that he should not change one rule since they will fight without using wings. He vows that he will become God. Metro believes that Mirai made a stupid rule that won’t give him an advantage, and a brat must not underestimate him. Metro believes that no human can beat him since the throne of God awaits him. Mukaido asks Metro if he believes that he has become God. Metro replies that he has become Lord God, and he likes the sound of that.

He looks at the sky and stretches his arm, and shouts that he is Lord God. Metro recalls when he was with a beloved one. The beloved one realizes that Metro has fulfilled his promises, and she is excited. Metro told the lady that the flowers he created would never wilt that afternoon. But that happiness vanished, and Metro decided he would become God to back that happiness since his beloved, Rea, died. Mirai believes that Metro won’t become God without paying for his sins. Saki gets excited since Mirai is surviving mighty blows.

Platinum End Episode 14 will be released on 14 January 2022. Mirai told Metro that he would receive divine punishment no matter how many killed people. They argue about God’s topic, and Mirai reveals that he is a ”special” human after showing Metro the powers he has never seen. Metro tried to manipulate Mirai and told him about Hajime, who had no friends. Let’s look at Platinum End Episode 14 official details.

Also Read: Futsal Boys Episode 1: All That You Need To Know.