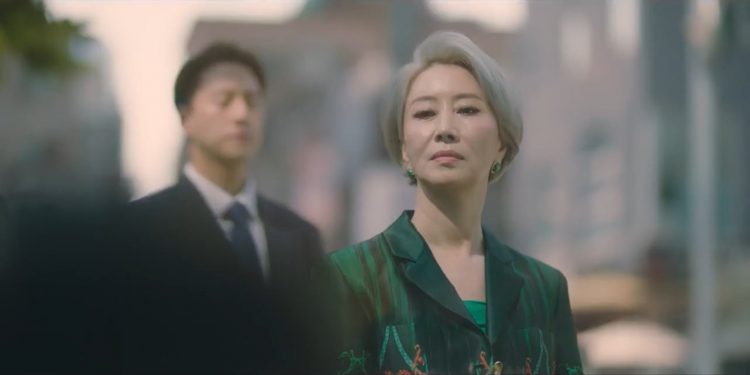 As the series progresses to episode 10 of ‘Uncle,’ it seems like it will get harder for Jihoo and his mother to escape what they’re running from. Jihoo’s grandmother is a vicious woman who will not give up on something she wants. Legally, Joonhee has custody of her son. But Joonhee knows that her Ex-Husband and Mother-in-law are people that are sitting at positions that allow them to extend unreasonable amounts of power over others. Joonhee is genuinely terrified that her son will be taken away from her because of them.

After Joonhyuk gets hired as the music teacher at the school Jihoo goes to, the Momvelies are flustered. They ask the principal to dismiss him, but his reply only tells them not to meddle in the school’s business anymore as he is tired of it. Though things are getting better at school for Jihoo, his grandmother will be making an appearance in the coming episode as someone who has great influence over the matters of an educational institution. Previously, we saw a scene where she sees Jihoo in public but does not approach him. This hints at the fact that she thinks she can have him without force, which is as petrifying to the viewers as it must be to Jihoo and his mother.

Dogyeong appears in front of Joonhyuk, with all hope lost. At first sight, Joonhyuk is furious and wants to drag him to the police station so he can turn himself in. However, his heart softens, and he takes him out for a meal before that. He gives Dogyeong a warm and motivational talk and comforts him by telling him of his own difficult past. As they are about to leave, they encounter a group of men in suits. Joonhyuk immediately realizes that these men are not the police like they claim to be but simply people hired by Hyeryung. He is aware that she must want Dogyeong gone before the police can even find him. The two try to escape but are caught and wake up in a cold room. Dogyeong cleverness manages to save them from freezing to death as he causes an explosion, and they escape.

Joonhee is accused of homicide

Before Dogyeong turns himself in, he pays Chaeyoung a visit. They have an emotional talk where he tells her that her mother will always interfere in their relationship and he could not handle it anymore. Devastated, Chaeyoung decides to visit the apartment he used to live in. Joonhee lets her have a look around, and Chaeyoung has a few nostalgic moments thinking back to the time she spent with Dogyeong in that space.

After the girl leaves, Joonhee feels unsettled and decides to follow her out. She realizes that Chayoung did not go down but went to the rooftop instead and chases after her. But it is too late, as Chaeyoung has already jumped off the building. Joonhee gives her statement to the police but is held back as Hyeryung accuses her of pushing Chaeyoung off the building. She encourages Dajung to give a false statement as a witness who saw that, which makes Joonhee a suspect.

As Chaeyoung lies unconscious, her mother is slowly losing her mind. She even goes as far as saying, ‘Why didn’t you just die?’ to her daughter, who lies still and takes off her oxygen mask. She is interrupted by a nurse that enters. Chaeyoung wakes up and remembers it all. Guided by Joonhyuk in a wheelchair, she comes forward when Hyeryung is making a scene about Joonhee being a murderer and confesses the truth. She admits that she jumped off the building of her own will and that Joonhee had nothing to do with it.

Hyeryung is forced to vacate her spot as the Diamond

As all of Hyeryung’s lies come to the surface, the Momvelies are more enraged than anyone else. When Hyeryung approaches the club like she used to, they ridicule her and do not let her even take the seat she always has. Hyeryung’s reaction is nothing close to being embarrassed or dispirited. In fact, she boldly stands up for herself and tells them that the club will not be able to function as it did before if she was gone. Adding to this, the next day, she is taken away by the police for embezzlement, forging signatures, and more. She also loses favor with the political leader she was collaborating with.

What to Expect From Episode 10 of ‘Uncle’?

Episode 10 of Uncle seems like it has a lot in store for us. We can expect to see Jihoo’s grandmother turning things in her favor. We witnessed her sharing multiple interactions with the congressman, Hyeryung used to work with.

Uncle Episode 10 will be released on 9 January 2022. Hyeryung may be in custody right now, but many think she will make a comeback, and it will be strong. Will we get to know more about what happens with Chaeyoung and Dogyeong? Tune in on the weekend to find out!

Where to Watch ‘Uncle’

Uncle can be streamed on Viki. Hyeryung’s dismissal, Joonhyuk becoming a music teacher, and Joonhee going out with Kyungil means a lot will happen in the upcoming episodes. All fans are eagerly waiting for the weekend to see all that shall change.