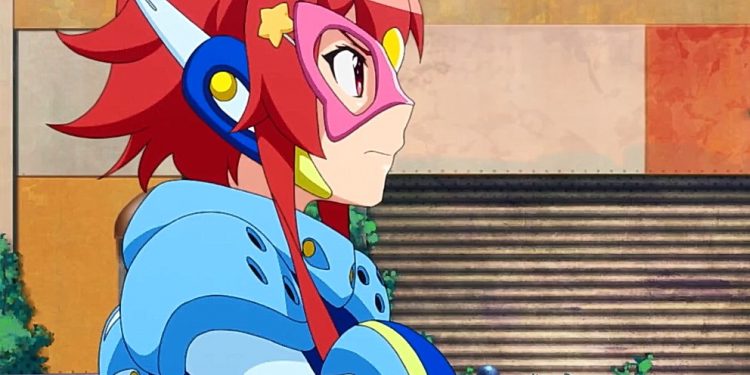 Rumble Garanndoll Episode 12 reveals the mystery behind True Army. Munakata decides to make a deal with True Army and realizes that he can get money to open another shop if he sells the robot. Hosomichi recalls the day he worked with Rin to fight against the enemies. But Captain Munataka has ruined everything after infiltrating the town and told them to evacuate from a lawless country, or it will be a war. The citizens accept defeat since True Army was well-prepared and Balzac Army has no match against them. In the recent episode of Rumble Garanndoll, Hosomichi wonders if it is the end of everything they have built.

The True Army continues to take things in Balzac’s territory, but the crew is relieved since a new battery girl has joined them. The lady was shining like an Angel, and Yuki wondered who is that shining lady. Rin is also surprised and never knew that there was someone inside. Balzac reveals that the lady who shines like Angel is Nastassja Tanaka’s general. The lady told them to call her Tanaka, and she kept her identity a secret. Yuki wonders if Tanaka is another Balzac since they show the same signature moves.

Mimi wanted to explain, but Balzac’s crew began to chant Tanaka’s name. Yuki and Rin can’t believe that Tanaka stole the hearts of all men since they get carried away whenever a new girl joins Balzac’s crew. The guys carry Tanaka like a queen, and Tanaka tells Yuki and Rin that she will prepare the Revolver for the next battle. They know they have scores to settle with True Army and defend the Territory since Captain Akatsuki wants to govern their territory. She promised them that she would pull the last trump card.

Hosomichi and Munataka continue their journey, but Hosomichi is worried about his crew. He asks Munataka if the crew will retreat, and Munataka believes they will leave the territory since they cannot fight back and will fool if they stay. Munataka has given up and wonders what the point of fighting is since they can make money and leave the country. Hosomichi realizes that this country was the first place he considers his home, making friends. But he can’t believe that they have to lose a place they call home and get separated since they were a family.

Munataka continues to talk, and Hosomichi looks by the window since he is not interested in money or leaving the country. He has no clues that Balzac’s crew is preparing to fight despite having a minimal chance of losing the battle. Munataka notices that Hosomichi is sad and talks about Rin, Mimi, Yuki, and other girls that Hosomichi doesn’t want to hurt. Hosomichi’s cellphone rings, but the battery dies before hearing important news. Munataka wonders why Hosomichi likes Zaburn’s ringtone. Hosomichi explains how Zaburn changed his life.

The two talk about Rin and how she liked the series; they watch Tv and discover that Akatsuki of the True Army is taking the Exhibition Center to Akihabara by airships. The news report reveals that Akatsuki is planning to drop it on Akihabara. Munataka switches the Tv since it is disturbing them. Yuki communicated with Hosomichi and told him that they couldn’t let things end like this. She wears her battery suit and gets ready for war. Yuki convinces everyone in Akiharaba to defend the territory.

Rumble Garanndoll Episode 12 will be released on 28 December 2021. Hosomichi decided to turn back since his robot stopped the car and reminded him not to give up. He apologizes to Munataka and that he will fight for Balzac’s territory. Hosomichi wields his Garrandoll and heads back to protect Balzac’s territory. Tanaka finished training with the Balzac crew, and the battle between Garrandolls and True Army began. Let’s look at Rumble Garanndoll Episode 12 official details.

Also Read: Will Love Free The Hostages Inside the Tower In Tower Of God Chapter 523?.

Is A Betrayal On It’s Way In Super Rich Episode 11?