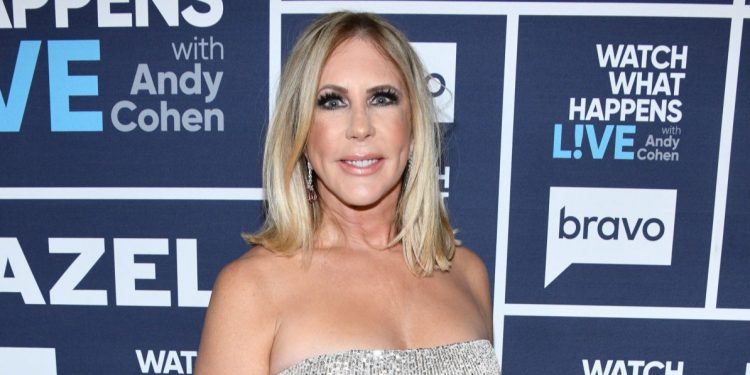 Vicki Gunvalson, the ex “Real Housewives of Orange County” star, has a new man in her life after her divorce from Steve Lodge. Vicki’s love tank may be filling up after she shared images of herself with a new partner on Instagram. The photographs, which were uploaded on her Instagram account on Thursday, December 30, 2021, show the man kissing her on the cheek and is tagged as Marlon Michel. People are interested in learning more about Vicki Gunvalson’s new boyfriend. So, in this article, we’ll go through what we know so far. But first, let’s take a look at Vicki Gunvalson. So, let’s start.

Victoria Gunvalson is a popular American reality television personality and businesswoman best known for her fourteen-season starring role as a housewife on Bravo’s The Real Housewives of Orange County. Vicki Gulvanson was born in Chicago, Illinois, on May 25, 1962. She comes from a middle-class background. Her father works in the construction industry. Gunvalson’s height is 1.7 meters, and she weighs 66 kilograms. Coto Insurance was founded by her. She is a part of the original cast of Bravo’s reality show The Real Housewives of Orange County. Gunvalson announced her resignation from the series in January 2020. She presented a podcast called Whoop It Up with Vicki in 2020.

Vicki Gunvalson’s new boyfriend is Marlon Michel. Vicky began seeing Marlon shortly after her divorce from Steve Lodge. Vicki posted two photos of the new man after her son-in-law teased him about being a “chaperone” on a date. Vicki’s son-in-law, Ryan Culberson, shared a photo on his Instagram post of his wife, Briana, and their three sons with the comment “Date chaperone” on December 27, 2021. Vicki was also seen seated with a male, whose identity was unknown at the time. Vicki has now shared two images of the man, the first of which is a group shot with Marlon standing next to Vicki, and the second of which shows him kissing her cheek with the comment “Here’s to a wonderful start to 2022,” which includes Vicki’s famous catchphrase. Following her post, Marlon has been called Vicki Gunvalson’s new man across the internet.

Who is Marlon Michel, and where did he come from?

If we talk about Marlon’s Instagram, which hasn’t been updated since July, there’s not much to go on. Marlon provided a glimpse of smoke from a small plane he looks to be flying himself in his most recent post, dated July 15, 2021. Marlon is a 1999 graduate of the University of Alberta’s medicine and dentistry department and works as an anesthesiologist, according to an article on the university’s website.

Michel practices in the United States and was “grew up in the little southern town of Glenwood, Alberta,” according to the article, which states that he “contributes his outstanding success to hard work and getting active in the community.” According to the website, the article was written in response to a $75,000 endowment (similar to a scholarship) he will give over the next five years “based on both academic standing and suggested financial need for MD students at the University of Alberta.” Marlon has two children, a boy, and a girl, according to his Instagram.

Vicki was previously married to Steve Lodge before dating Marlon. Gunvalson of the famous show Real Housewives of Orange County dated her ex-fiancé, Steve Lodge, for five years before calling their separation in 2021. Vicki claimed that she met Steve at a charity event in April 2016, and the two began dating soon after. After what she had gone through with her ex, Brooks Ayers, the former Housewife was overjoyed to find a man she could trust. Vicki was not just in love with Steve, but her children Michael and Briana were also supportive of her new relationship. Steve first appeared to be the appropriate match for Vicki, but it appears that their relationship began to deteriorate shortly after the engagement. Each of them, however, appears to have moved on, as Steve is now engaged to someone else, and Vicki is rumored to be dating a new man.

Vicki Gunvalson earned the Bravo Network’s Lifetime Achievement Award in 2014. It was the first year of the Real Housewives of Atlanta Awards. In 2015, Gunvalson was named Orange County’s Entrepreneur. The popular award was presented to her in recognition of her contributions to the insurance and financial services industries. Vicki Gunvalson got the Reality TV Award for Reality Queen in 2016. Vicki Gunvalson has a net worth of $7 million dollars. Aside from business, she was paid a yearly income of $500,000 thousand by the Real Housewives of Orange County. Vicki Gunvalson is one of the top actresses in the world. Despite her personal difficulties, she has remained committed to her job.

Also Read: Who is Danny Cipriani’s Girlfriend? Who Is The Rugby Player Dating?