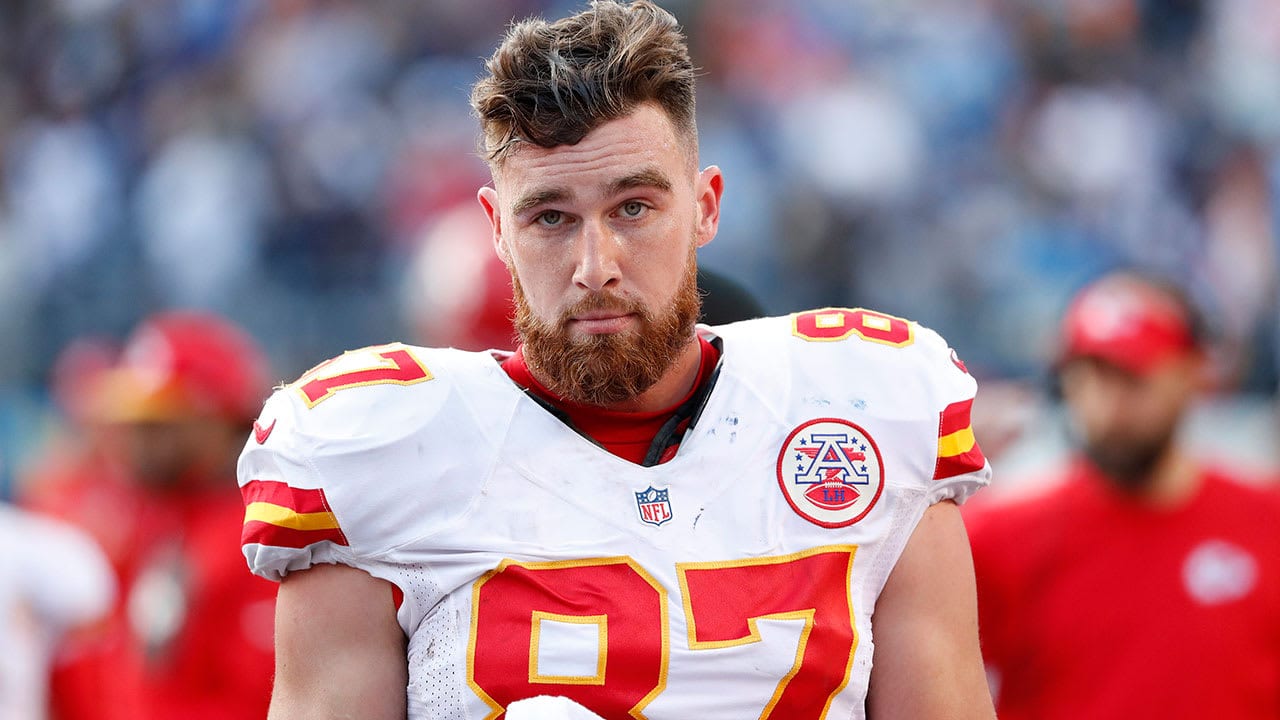 Who is Travis Kelce dating?

Original Article: American football tight end, Travis Kelce, born Travis Michael Kelce, plays for the Kansas City Chiefs in the National Football Association. He was drafted in 2013 by the Chiefs in the third round of the NFL draft. And later, he won the Super Bowl LIV with the team over the San Francisco 49ers. Previously Kelce used to play at the University of Cincinnati. He’s also a six-time Pro Bowler and three-time first-team All-Pro selection.

Undoubtedly, Travis Kelce is full of talent. However, his dating life is also one of a kind. He has a separate and huge fan base. The fans always want to know who Travis Kelce is engaged with romantically. Luckily, the football star has been dating his girlfriend for a long time now, and things are serious.

Earlier, the athlete said pretty great things about his partner. Furthermore, he explained how she is one of the best things that ever happened to him. So let’s go ahead and find out more about his partner and girlfriend. Who knows she might steal his last name soon?

Who is Travis Kelce dating?

Travis starred in the 2016 E! Entertainment television show, Catching Kelce. He met 50 young and beautiful ladies in the show, who participated in the race to win his heart. Maya Benberry was announced as the winner. But, unfortunately, Travis dated her only for a brief amount of time.

He later began dating his current girlfriend and partner, Kayla Nicole. And she has been with him ever since. She is a reporter and a model, and with over 500K Instagram followers, she’s been living a happy life with Kelce. During a Q & A session on Instagram, Nicole revealed that the couple met on Instagram. She also confessed that Travis stalked her, and then she DM’d him. And it was the end. It is definitely the shortest and the sweetest love story we have ever heard. 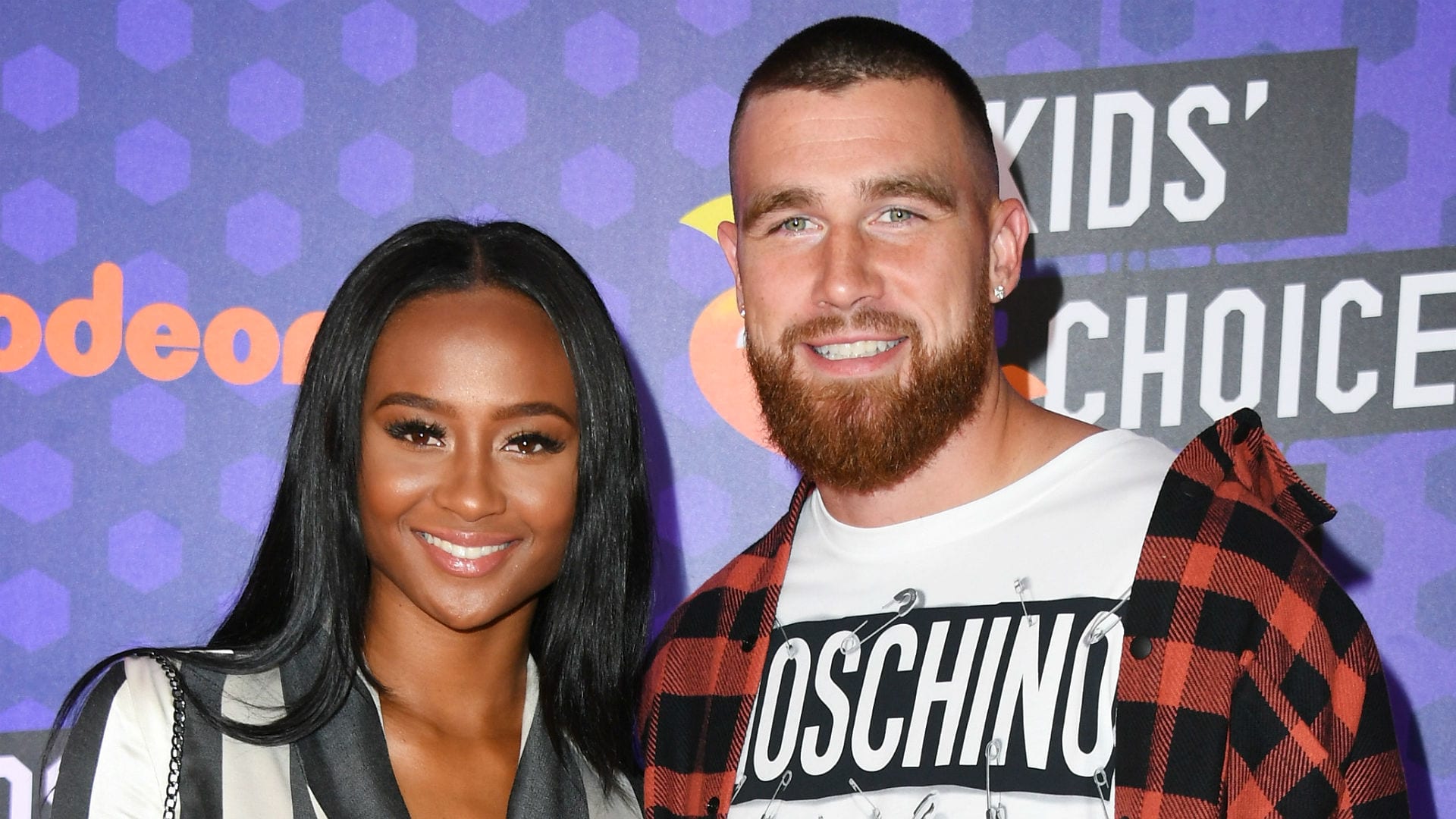 Unfortunately, in August 2020, Travis and Nicole parted ways. But don’t worry, the couple has reconciled now. Months after their break up, Travis confirmed in an interview with WNBA that he and Nicole are back together. Moreover, they will be celebrating Christmas together.

Nicole frequently posts pictures of her and Travis. Check out her IG posts with beau Travis here. Undoubtedly she is her man’s biggest fan. In the IG post, she wrote that she woke up next to this AFC champion. And it is the most satisfying thing to watch her man achieve his dreams. She also praised her boyfriend for his dedication. Furthermore, she mentioned that his passion for this game is unmatched. He also inspires her, and she confessed that she dreams bigger because of him.

Who Is Kayla Nicole?

Born on November 1, 1991, Kayla is the second child of her parents. Born to Roosevelt Brown and Robin Curry, Kayla has a West Indian origin, although she hails from Los Angeles, California. Kayla Nicole was formerly known as Kayla brown, and she began dating Travis skills in 2017.

Nicole owns a journalism degree from Pepperdine University in Malibu. However, she also works as an On-Camera host and model. She’s also a sports journalist. Previously, she has worked as a reporter for the NBA And BET. Nicole has also been a part of beauty pageants. 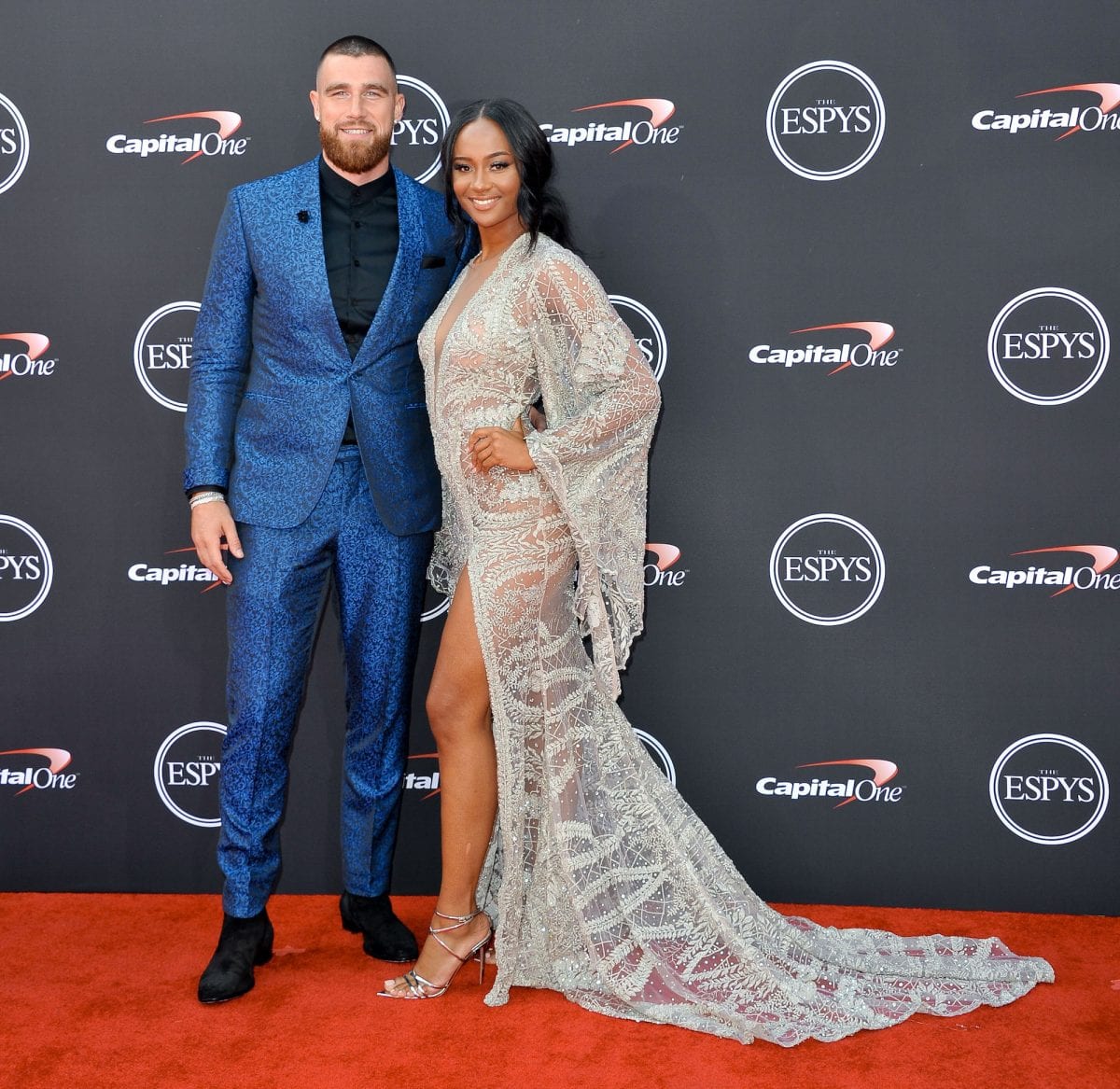 Besides her work as a journalist, she also owns a fitness brand called strong is sexy. Kayla often posts workout videos on the YouTube channel as well. Travis’s girlfriend also works for Fashion Reverie, a fashion magazine. Look’s like she is equally talented as her partner.

Nicole and Travis have been dating for a long time now. And things seem pretty serious between the couple. Recently Nicole professed that she is ready to be a wife. Do we hear wedding bells? Anytime soon? We hope so.

The football star has already opened his heart and previously told that she makes him happy. And she is the best thing in his life. We hope the couple stays together for a long time.

Until then, keep reading and stay tuned for more updates on your favorite celebs in the town.

Meet Travis Kelce’s Girlfriend In 2022: Who Is She?

Coming back to Travis Kelce’s personal life, he previously dated Maya Benberry, whom he met in the dating show, Catching Kelce. When things didn’t work, they broke up for their respective betterment. It didn’t stop him from getting romantically linked again. Thereafter, Travis started dating a social media influencer with whom things ended too. What’s up with him now? He appears to be happy and in love too. Who is she? If you are looking for Travis Kelce’s Girlfriend in 2022, here is what we know.

Talking about his love interest, Travis Kelce’s Girlfriend in 2022 is reported to be Zuri Hall. Who is she? Well, Zuri is professionally a television personality. She serves as the correspondent for Access Hollywood on NBC. Besides this, she also presents the show, American Ninja Warrior. Zuri also made a cameo appearance on The Morning Show. Last year, she also hosted Miss USA. Also, she appeared on Race in America Season 2, in 2020. 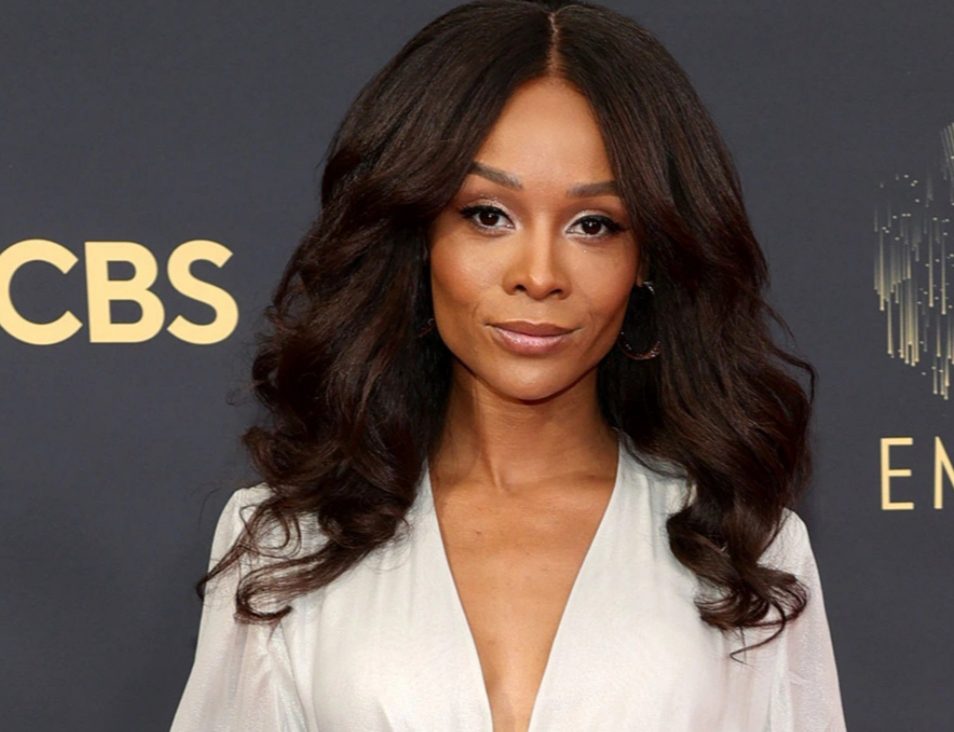 Born on 2 June 1988, Travis Kelce’s Girlfriend is now 34 years old. This means she is older than Travis by a year. But, who cares about the age, when in love? Well, she hails from Toledo, Ohio. We wonder what fueled their dating rumors on the internet.

It’s not known since when Travis Kelce and Zuri Hall are sharing a romance. But, it feels like they are in the early stages of their relationship. Neither of them has posted any pictures of them as a couple, so far, on their social media accounts. So, we surely can’t comment anything on Travis Kelce’s rumored relationship with Zuri Hall.

As mentioned earlier Travis Kelce’s long-time ex-girlfriend, was Kayla Nicole. Their relationship was on and off. They started dating back in 2017 and called it quits, this year. He slid into her DMs on social media and that was how things started between them. However, fans were not shocked by their split as many already expected the same to happen at any time. The reason was reported to be more because the NFL player was frustrated and tired and thus forced her to pay half for everything. 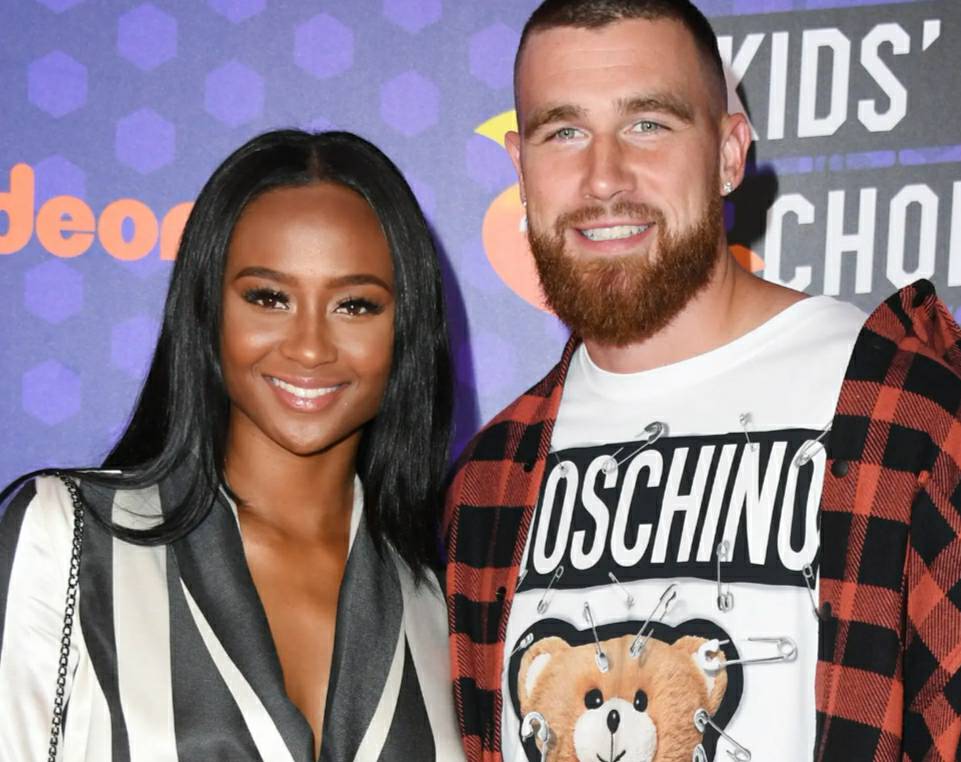 Wishing Travis Kelce nothing but the best for the upcoming days of his life. You may give Travis a following on his Instagram account for more updates. Well, imagining Zuri Hall and Travis Kelce together as a couple, they will look good together. Hoping their dating rumors turn out to be true. What’s your say on Travis’s reported relationship with Zuri?