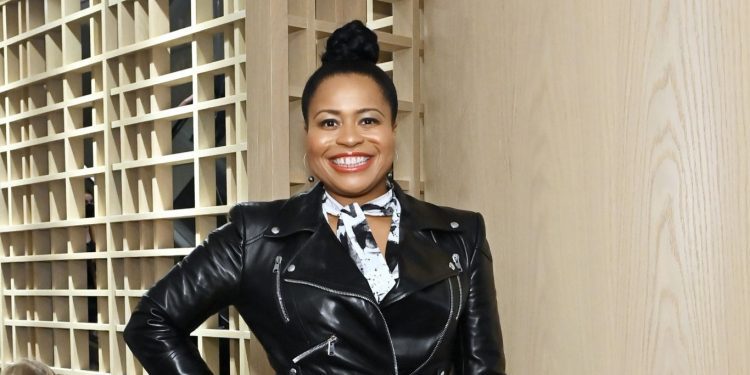 Courtney Kemp’s success as a writer and producer on CBS’s The Good Wife (2009-2016) paved the path for her to create the critically acclaimed criminal thriller Power (Starz, 2014-) and become one of the fewest African-American showrunners in primetime television. She began writing original stories before she was a teenager in Westport, Connecticut, and polished her skills at Brown University and Columbia University, where she obtained her master’s degree. Who is Courtney Kemp’s Boyfriend? We will answer all the questions here.

Kemp made a name for herself as a creator and showrunner with the success of Starz’s ensemble crime thriller “Power.” But she’s now breaking into the big leagues of uber-producer status as she plots the path for four spinoffs focusing on major characters in order to create a “Power” universe similar to the Marvel Cinematic Universe’s sophisticated storytelling. “Power Book II: Ghost” premiered in 2020, followed by “Power Book III: Raising Kanan” in 2021, and “Power Book IV: Force” in early 2022, with the first two having already been renewed for second seasons. Despite her ties to Starz and Lionsgate, Kemp signed a multi-year deal with Netflix in August 2021 to create new programming for the streaming service. Kemp’s End of Episode banner attempts to highlight stories created by women, people of color, and LGBTQ+ people.

Who is Courtney Kemp’s Boyfriend?

Courtney Kemp is currently single and is not dating anyone. In terms of the American writer’s personal life, she married a Ghanaian guy and took his surname, ‘Agboh,’ after their marriage. Agboh divorced him after only a few years of marriage. The writer is currently single and no longer goes by the name ‘Agboh.’ She goes by the handle ‘Courtney A. Kemp’ on Twitter and Instagram. The media, on the other hand, has no access to the specifics of her other family members, family background, or relations.

Courtney A. Kemp was born on May 4, 1977, in Westport, Connecticut, in the United States. She began reading college textbooks at the age of eight and then moved on to William Shakespeare’s plays. She attended Staples High School and graduated in 1994. Kemp afterward attended Brown University, where she earned her bachelor’s degree. Courtney then went on to earn a Master’s degree in English Literature from Columbia University. Kemp lost her loving father, Herbert Kemp Jr., in 2011 and dedicated the first episode of ‘Power’ to him.

How Kemp Rose To Prominence?

Kemp worked for high-profile magazines like Mademoiselle and GQ after graduation before leaving journalism to write for the J. Crew catalog. While she was there, she was approached by television producers who wanted to turn a story Kemp had written for GQ into a series. The concept never materialized, but it piqued Kemp’s interest in writing for television.

Kemp migrated to Los Angeles at the age of 26 and got a job as a staff writer on the famous “The Bernie Mac Show” (Fox, 2001-06). Courtney went on to work as a writer and script editor on shows including Eli Stone (ABC, 2008-09) before settling into her role as a writer and producer on The Good Wife. Kemp received an Emmy nomination for Outstanding Drama Series with producers Ridley and Tony Scott in 2011 before departing the CBS series the following year. Kemp then worked as a producer and occasional writer on network shows such as Hawaii 5-0 (CBS) before taking over as showrunner with Power. The crime drama, which was co-produced and co-starred rapper Curtis “50 Cent” Jackson, was one of Starz’s most popular shows, with the greatest ratings for its second season premiere and finale in the network’s history.

The four-year, reportedly eight-figure agreement will have Kemp’s End of Episode production company creating content for the worldwide streaming video service. Kemp will continue to serve as an executive producer on all of Starz’s Power spinoffs, including Book II: Ghost, Book III: Raising Kanan, and Book IV: Force (which is slated to premiere in early 2022).