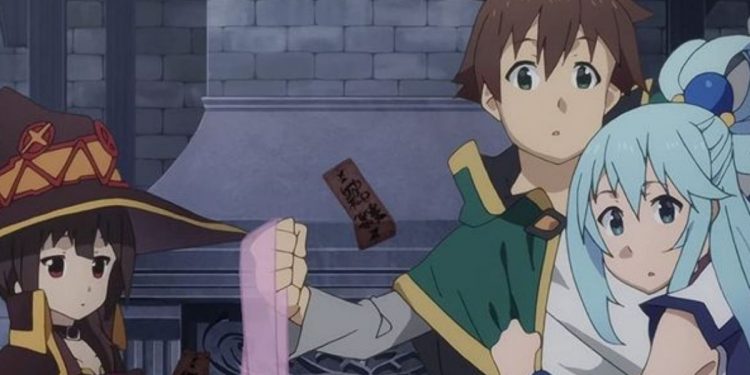 When you are a fan of anime and manga series, your life not just only goes around the plot and events of the series. Being an otaku means that you are equally involved in the life of characters too. With the life of character doesn’t mean limiting yourself to what you are currently witnessing in the series, it sometimes works by curiosity. Throughout a particular anime series, we witness interactions between various characters, and sometimes we just wanna know who is going to end up with whom. Most of the time, it is regarding the protagonist’s love interest and sometimes about the side characters. In this article, we are going to know about the personal life of Kazuma from the series Konosuba. In straight wordings, we are going to know with whom Kazuma is going to end up by the end of the series.

Konosuba: God’s Blessing on This Wonderful World is a Japanese light novel series created by Natsume Akatsuki was released on 1st October 2013. Later, an anime adaptation of the light novel was also revealed with illustrations by Masahito Watari and Joseph Yokobori. The manga series started published by Fujimi Shobo on 9th September 2014 and is still ongoing. Later, an anime adaption of the manga by Studio Deen was also released on 14th January 2016. The anime series has been concluded with 20 episodes and 2 OVAs. The series was popular that’s why we hear going to the discussion about who will end up with Kazuma?

If you have seen even a little bit of the series Konosuba, you will be very well aware of this character. Kazuma Satou is the protagonist of the series, the guy is living a literal dream or every fantasy lover. He was reincarnated into a fantasy world after death. Initially, he was a common student from Japan who preferred to skip school just to sulk around the house and play a video game. However, he died in an accident and was reincarnated in the fantasy world. There he met the Goddess of Water Aqua and paired with her to defeat the demon king. As for his appearance, Kazuma is not a very tall man and stands at 5’4″. He was spiky brown hair with a green that together gives him a rather cute look.

As for his personality, Kazuma has lived two lives, and back in his normal life, he was a complete introvert. He didn’t like to socialize and stayed within his house until he have to move for something more adventurous. When he was sent to the fantasy after his death, his personality didn’t change completely. As he lived a life in the fantasy world, he used to manifest some of the traits from his previous life. He used to get nervous while meeting someone new. Other than this, Kazuma is very well at making sarcastic remarks and has a blunt speech. Throughout the series, we have witnessed Kazuma coming in contact with many women as he was actively trying to build his harem. So, this fact makes us wonder with whom among all the women he will end up with.

Who does Kazuma end up with in KonoSuba?

In the very beginning, when Kazuma was sent to the fantasy world, he met Aqua first. Despite we seen them bickering and fighting over the petty things in the whole series, they both were proved to be inseparable. However, this doesn’t mean that we should ship them together because they reflect more of a sibling’s behavior. Then there comes Darkness, who almost ended up with him but missed her shot. When Kazuma saved Darkness from her arranged marriage, she developed feelings for him. In volume 12, she finally decided to confess her feelings but was rejected by Kazuma and left with a final kiss. So, with whom Kazuma ended up, don’t forget we are still left with Megumin, and she is going to hail the answer with major spoilers.

From the very first moment since Kazuma and Megumin met each other, they both enjoyed their close relationship, and they stood by each other every time. They both developed a relationship where Megumin started to feel secure in his presence. After the eventual progress of their relationship, Megumim labeled their relation as “more than friends but less than lovers”. In volume 14, we witnessed both of them in an increased level of intimacy. After a short while, in volume 17, Megumin and Kazuma end up together and make their relationship public.