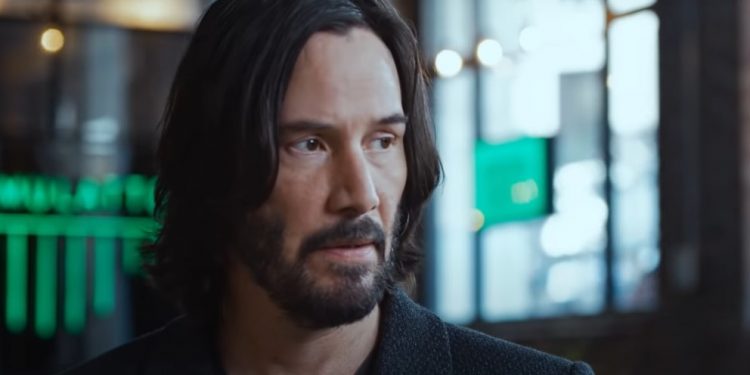 When is The Matrix Resurrections release date? The latest matrix movie will see Carrie-Ann Moss and Keanu Reprise their roles as Trinity and Neo respectively, as they embark on a fight against a computerized world that enslaved mankind and sent it to sleep on pods creating a virtual reality world. If you ever read Plato’s cavern of souls, it has a very similar feel to it.

Created out of a script penned by Lana Wachowski, Aleksandar Hemon, and David Mitchell, The Matrix Revolutions will take newcomers and veteran fans of the 1990s-2000s movies to yet another installment of a world of cybernetic science fiction fantasy horror adventure where man must fight machines. Come and take the red pill with us here at Otakukart as we prepare to enter The Matrix.

The Matrix Resurrections will release on December 22, 2021, in theaters everywhere, and it will also release on HBO Max the same day at 3:00 AM, Eastern Time, United States. Additionally, the movie will be available for streaming on HBO Max for a month. So, if you want to enter the matrix, read our scoop on where to watch this movie further down this article. Instead of presenting you a review chock-full of spoilers, I chose to give you my honest opinion on this movie in the following section with the least amount of spoilers possible.

Is Lana Wachowski Pushing it Too Far With a Fourth Movie?

The original Matrix trilogy became a pop culture icon and changed the way we think about movies. Firstly, it changed vocabulary. And that’s something few movies have the luxury of doing, take, for example, Francis Ford Coppola’s “The Godfather” with “I’ll make him an offer he can’t refuse”, or George Lucas’ Star Wars with “May the force be with you”. In the case of the Matrix, it’s “red pill or blue pill” and the new meanings they now have in pop culture. Back when the original movies came out, Lana was Larry Wachowski, and the world isn’t been the same since 2003.

Secondly, if you look at the interviews that the filmmakers did about this movie, The Matrix Resurrections isn’t much about man versus machine. I mean, the feeling is there, for sure. But it’s much more a love story and a heist film than a matrix film. In my opinion, if the matrix was to be resurrected only to see Neo as a corporate sellout doing games and have Lana Wachowski lazily compile the previous adventures into the backstory for a videogame franchise inside the movie. They’d best leave the matrix dead.

Take into consideration a few things, Carrie Ann and Keanu are twenty years older now, they can’t choreograph martial arts as well. And no matter how many dazzling special effects you put into the movie, if you can’t have a consistent plot, you’ll end up with just another Speed Racer —another Wachowski blunder no one remembers or more likely, tries to forget. There are notorious absences and big shoes to fill, Laurence Fishburne’s Morpheus is no longer there, and Hugo Weaving’s iconic Agent Smith is now incarnated by a Jonathan Groff with sunshades and an attitude that simply won’t go to the standards the iconic Hugo Weaving accustomed us.

In sum, if Lana Wachowski wanted to make a better story, she would’ve never made this movie. An enamored Neo seeking to rekindle things with Trinity defeats the purpose of having him go through the pain of actually losing her in the previous installment. That’s the whole point of the nature of the heroic. But don’t let my lines discourage you from watching this movie. This is just my opinion. Watch at your discretion, but rest assured, it ain’t nothing like the previous ones. That’s for sure.

Where to Watch The Matrix Resurrections?

The Matrix Resurrections will be available in theaters worldwide. And if you want to watch it online, then navigate to HBO Max. Firstly, HBO Max will be the only place to enter the matrix this 2021. As stated earlier, the movie will release on December 22, 2021. And the movie will also be available on HBO Max on the same date for 31 days. If you wish to watch The Matrix via HBO Max you must have the HBO Max ad-free plan that goes for US$ 14.99 a month.