The Society Ending Explained: Where Did The Kids Go? 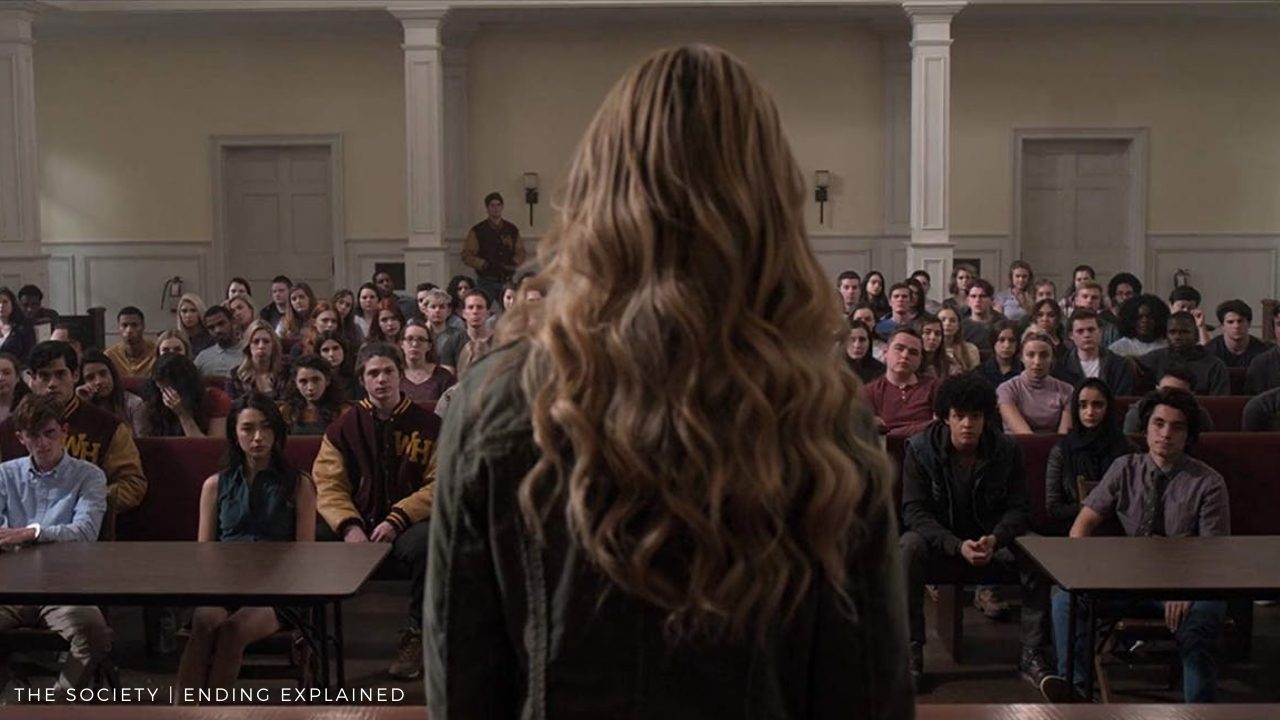 “The Society” has been one of the highest-rated shows on Netflix. The best coming-of-age drama you can come across to. And if you are planning to move out and living on your own, it is a must-watch. The idea of a group of youngsters trying to manage a whole of the society and trying to save it from ending is something that can not be skipped. Season 1 of The Society left the show on a cliffhanger. And unfortunately, it won’t be coming back for a second season. So here is what we can make up from the ending of The Society to feed our pleasure!

We can say it all begins when a questionable ‘smell’ started spreading in the town of West Ham, Connecticut. Nobody has any idea where the smell is coming from, sometimes the smell is gone, sometimes it’s so high that you can’t breathe. One of the officials has called a man named Pfeiffer to look into the matter. While the elders are busy with their work, the kids of the town are going on a camping trip for the weekend. As the day goes on, Grizz, the football guy notices a Bible verse “Menemene tekel upharsin” graffitied on the wall. Ignoring it he goes to the bus that is going to take him on the trip with his friends. As the bus takes them to camp away, they have to cancel their trip. Because of some landslide that has blocked the roads. 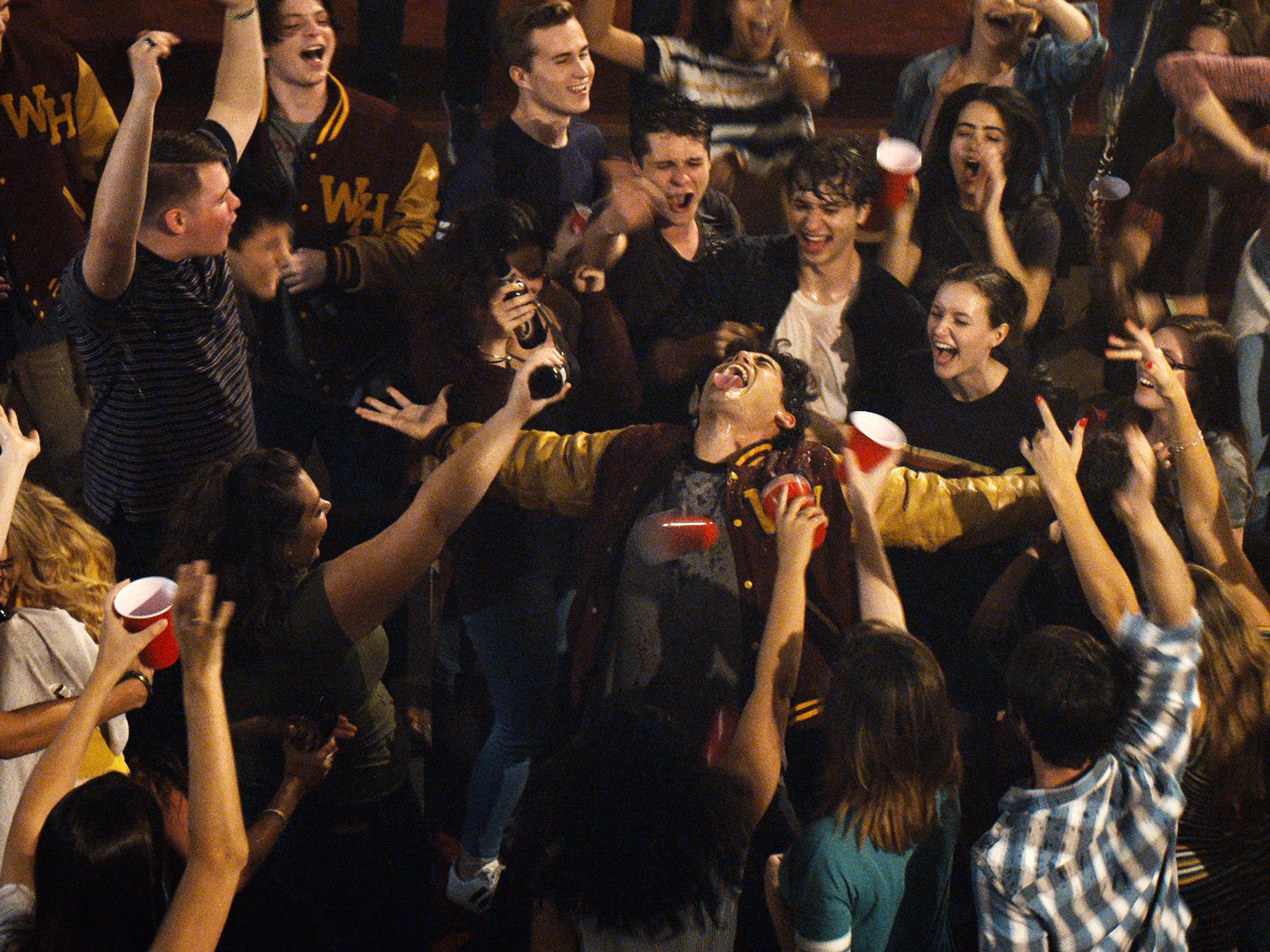 What Happened In “The Society”?

And as they reach the stop where they started, they find not a single person in the town waiting for them. With everybody gone, the teenagers decide to do the most basic thing they could think of: throwing a party. A lot of things happen at the party, pictures, couple fights, loners going back to their rooms, confessions, and a lot more. But a sudden realization hit them that there is no internet or cable TV. Or anything for that matter that connects them to the outside world. As the sun rises the next day, the youngsters see no sign of the adults or any other living creature other than themselves in the town. Every road and the rail tracks are cut short at the ends surrounded by a thick forest. Holding on to the fact that they are all alone, Cassandra suggests everyone stick together.

But it is not as easy as it sounds since everyone has a mind of their own and raging hormones. Everyone together tries their best to form a society and get back to the “normal”. Making a list of the food and other resources they have and managing it. Looking through old photos and documents so they can find a single clue. Looking through they find out that the strange man Pfeiffer asked for $1.5 million to remove the smell but the council denied it. Thinking this could be a possible reason Campbell destroys the documents to save his family’s honor. From what started with eclipses on alternate days soon became something big. A rainstorm with things setting themselves on fire and store windows being broken.

Also Read: The Last Of Us Part II Ending Explained: The Game Is A Masterpiece

Setting Up The Laws and The Prom

As they know that the danger is just starting, it is no use for them to just wait and see what happens. Cassandra, being a born leader proposes to set laws as there was a certain danger to the women in comparison to men. Pitching in with her, Kelly suggests organizing the prom as it will be a step-up for getting back to normal. Organizing a town meeting, they start planning how things will go on from now and set a “committee to go home”. From the food being rationed to everyone eating together in the cafeteria. Living together to save energy and water. While everyone is trying to co-operate with Cassandra, there are some who aren’t happy with her. Harry being rude to her and going against her and her sister Allie not liking that she is taking the lead. 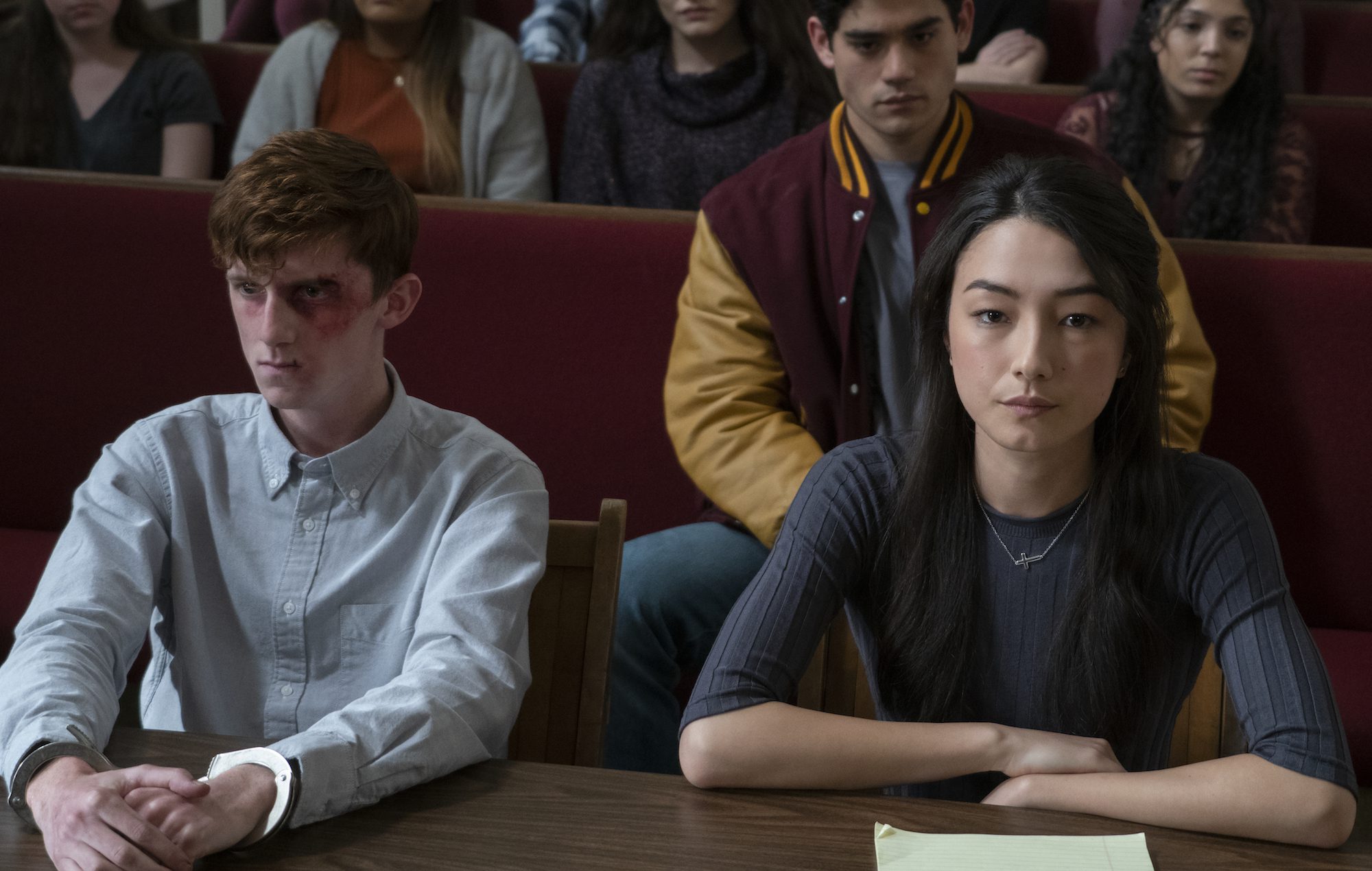 Soon the date of the prom comes up along with a love triangle between Allie, Will, and Kelly. Campbell and Elle are too hooking up for the first time. While everybody’s having their moments, Cassandra stays back to clean up. As she goes to take the trash out, she sees a dog and bends down to pet the dog before it goes running off. As she gets up, somebody attacks her with a gun.

Looking For The Killer

All of the youngsters hold the memorial service for Cassandra. Gordie along with Allie takes up the responsibility to investigate her murder. With the leader gone, the committee starts to fall apart. Looking at all the chaos, Allie is asked to take her late sister’s position. After being forced by Gordie, Will, Becca, Sam, Luke, and Grizz, she agrees. With her taking the lead, Allie confiscates all the guns in the town. A few days later a guy names Dewey that nobody had any idea about confesses to Harry that he was the one who killed Cassandra from him.

Telling this to the committee, the guards go on to arrest him. In his trial, Dewey revealed that the reason he killed Cassandra is that she rejected him and Campbell helped him kill her. Proved guilty, he is sentenced to death while Campbell after spending some time in jail gets out because of no proof against him. 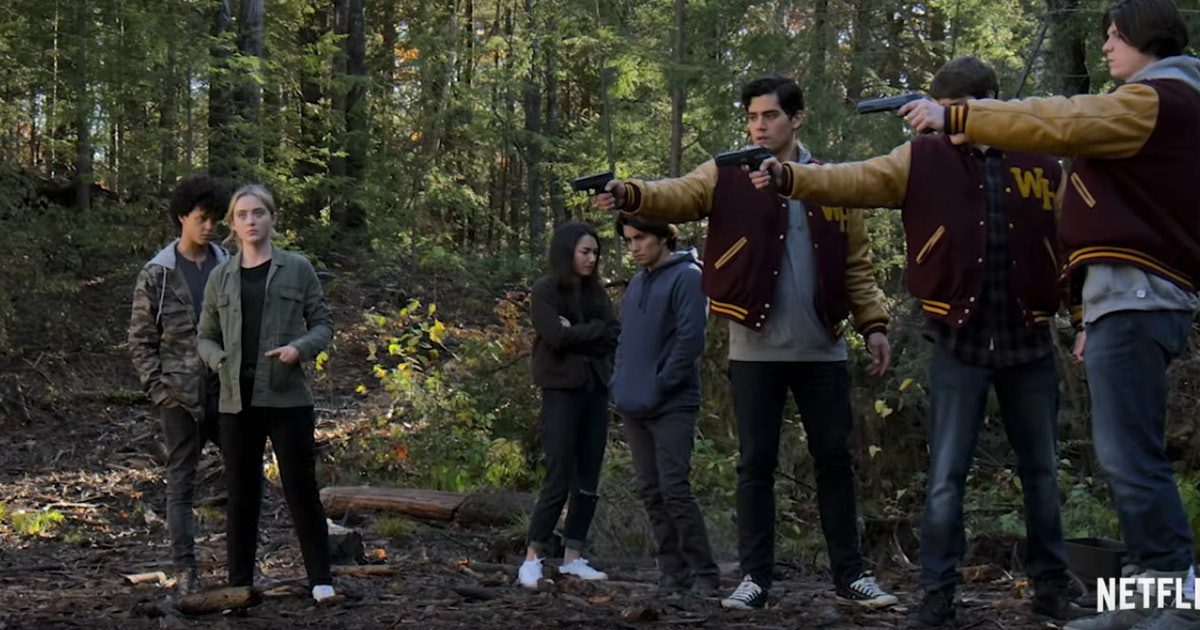 The Ending Of “The Society” Explained!!!

As The Society moves towards its ending, six months have passed. The guy who killed Cassandra is dead. Allie is leading the committee go back home. Luke and Helena are engaged. Sam said that Becca can tell she is pregnant with his kid since he has always wanted a family. Gwen and Clark are in a fake relationship so they can have a private room. Allie and Will are working on their relationship. And Thanksgiving is coming!! With the looks of it, things are starting to get better but problems haven’t ended yet. As the food and resources are ending day by day, society will only be able to go through the upcoming winter and spring. To overcome the problem, there are going to start farming.

Also Read: Who Is Lindsey Stirling’s Boyfriend? About The Violinist’s Love Life

An Attempt To Murder

At Thanksgiving, everybody got some major changes. While everybody is celebrating together, Elle and Campbell decide to spend time alone. Sick of him torturing her, Elle tries to poison Campbell through his favorite pie. As she makes it for him on the occasion, he suggests celebrating with everybody at the church. By the end of Thanksgiving, a few people from the whole society including Allie eats the pie. Feeling guilty Elle eats most of the pie herself. As the poison starts kicking in, all of them end up in the hospital but luckily nobody dies. As the occasion ends, Allie announces that the city will run the proper elections and choose a mayor. The people who are running for Mayor are Harry, Allie, and Lexie.

Looking through the old pictures when it all started, Kelly realizes that the bus driver behind Cassandra is not just anyone but the man who was supposed to be dealing with the strange smell. 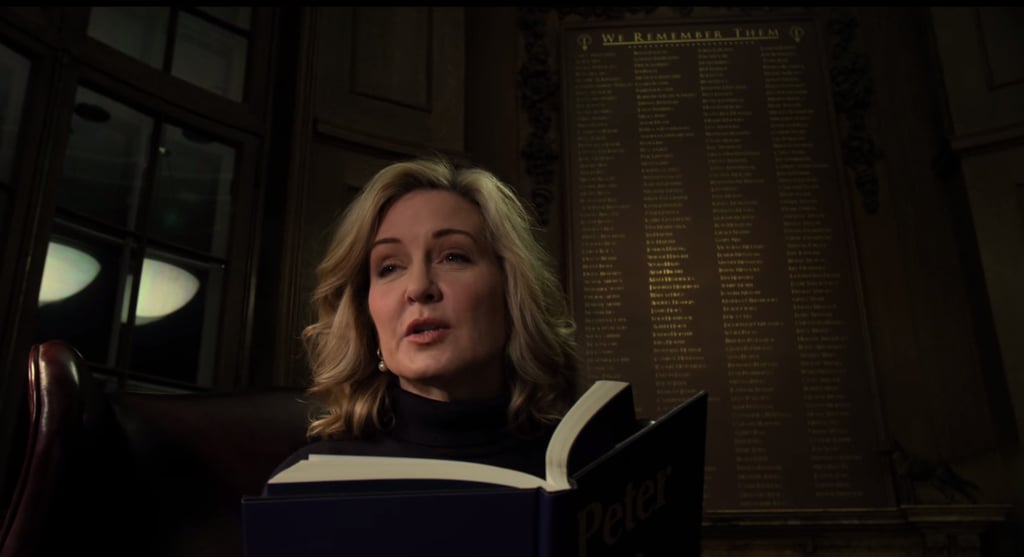 The Society Ending: Is It The Parallel Universe?

Nobody really remembers the strange man or the driver. And they are definitely not ready to believe that man drove them to a parallel universe. As the discussion goes on, Campbell plays his trick and sends the guards to arrest Allie and Will. Telling everyone that they have been plotting against him and keeping Elle hostage. On the other side, Lexie keeps getting people against Allie. As both Allie and Will are brought to church, an angry mob is awaiting them. Blaming them for planning to sabotage the election, the mob tries to lynch both of them. As everything goes dark. They saw the dog i.e. the only living being except them in front of the library. A hand reaches down to pet it and it belongs to Allie’s mother.

She walks into the library and begins reading from Peter Pan to the people of the society. All of them wearing yellow ribbons. There is a hoarding behind them that reads “WE REMEMBER THEM” with the name of all the kids living in another world.

COD Vanguard Beta: When Will it Be Available?

How Freddie Mercury Passed Away? The Rock Artist Extraordinaire