Isaiah did walk through the light but moments later it took three other people as well. What does this mean for La Brea Season 1 Episode 11? 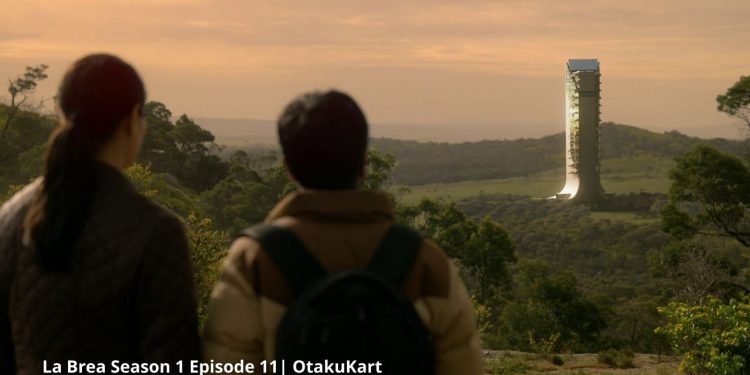 La Brea saw Eve and her group managing to get Isaiah to the light. Probably they rushed, and the Mysterious Light took some dear ones of their own with Isaiah. Also, a presence of a mysterious technology back in time may also affect the way we look at this world in La Brea Season 1 Episode 11 if it’s happening. So what went down? It all came down to Silas wanting Isaiah back and not letting him go with Eve. This saw him holding Josh and Levi captive. Either Eve brings his grandson, or Josh dies, that was the deal. Eve didn’t think twice and left to save her son.

So, Eve’s group did manage to take down Silas’ group for now. But they also had to make it in time before the light closed, and this saw Izzy on the other side and Josh on this side getting sicker every other minute. On top of that, Gavin, Izzy, and Ella saw that there is a chance that another sinkhole is opening. It was far away in Seattle, Gavin, Ella, and Izzy have a chance to save their family and loved ones, but what if they didn’t find what they were looking for on the other side? Let’s find out.

Previously on La Brea Season 1, we opened with Eve going all out to save Josh and Levi. Silas held them captive hoping Eve would bring and give him Isaiah back. At the same time, Eve needed to get Isaiah to the light, or her children will die. She decided to go ahead and confront Silas as his men surrounded her. Getting caught was the plan all along. Meanwhile, Ty and Paara gather back up to save Eve, Josh, and Levi. Lily, on her side, had a mission of her own to bring the map to Isaiah as she was joined by Veronica.

Eve’s friends came and got her, Josh and Levi rescued. In a matter of moments, Josh started feeling a weird pain in his body. It’s all because of Light coming to a close which will see Josh and Izzy getting sick slowly. So we see the same on the other side where Gavin and Izzy plan to leave for Seattle, where the next Sinkhole could be opening. Thus, giving them a chance to go to the other side and save their family. But before they can leave, Izzy starts feeling the same effect Josh did.

Also Read: The Grand Serpent Arrived on Earth: What will happen in Doctor Who Season 13 Episode 6?

Tragedies take place when Marybeth’s wounded trying to save Isaiah and fighting one of Silas’ men. She soon succumbs to the injury leaving Lucas crying. At the same time, Lily had to leave Veronica behind as she got caught in an animal trap. The light was closing, and Lily had to make that decision in order to get to Isaiah in time.

After going through caves and traps inside them, Eve’s group comes closer to light only to see Silas come confronting again. Izzy and Josh continue to grow sick while Eve takes a desperate decision to attack Silas. With help of Ty and Paara, she gets him to the light, and he walks. Izzy and Josh are back to being normal, and things seem to have cooled down for now as the groups come together and embrace the hard-fought victory.

Lily doesn’t make it in time to give Isaiah the map. Riley comforts her to let it go, but before they can walk back, the light grabs both of them and Josh as well. At the same time, Gavin, Ella, and Izzy track down the sinkhole and jump in it to go back in time to rescue their family and loved ones. Lastly, Aldrige led Scott to a mysterious, technologically advanced building that exists in this stone-age world.

La Brea Season 1 Episode 11 is not happening. Episode 10 of La Brea marked the end of the first reason for the show but there is another good news in the air. NBC has renewed the show for a second season run that may continue the story right where it left off. We are expecting La Brea Season 2 release in late 2022. Around the same time, the first season debuted if the show picked up production quickly.

Once La Brea Season 2 arrives, there are several questions we would like an answer to. For example, where did the light take Riley, Josh, and Lily? Then the mysterious building that Aldrige introduces Scott to. Does that mean advanced technology was in hiding from the men back in time?  Coming to Gavin, Ella, and Izzy, how far would it take them to reunite with Eve, Josh, and Veronica? Also the longer path they would have to take in order to track them as they were in Seattle when they jumped into Sinkhole.

La Brea Season 1 Episode 11 might not be happening. But, until Season 2 of La Brea arrives, you can stream the first season on Hulu in the United States while on 9Now in Australia. In the other international territories, you can opt to video-on-demand services of Amazon Prime Video, VUDU, iTunes, Microsoft, Google Play Movies & TV, and YouTube TV to buy and rent La Brea Season 1.