"The Ice Road" entails a thrilling story that comes with some twists, turns, and perils aplenty. We breakdown what goes down at the end of this Liam Neeson starrer. 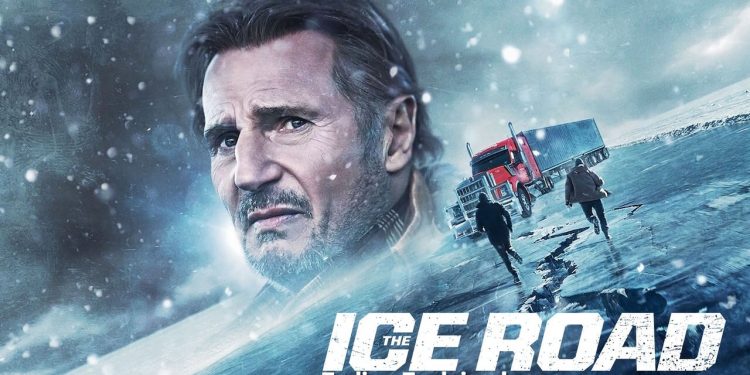 The Ice Road is currently available to stream on Netflix.

“The Ice Road” is yet another addition to the long list of Liam Neeson starrer action vehicles. This time, Neeson is battling the frozen ocean with heavy-duty trucks. Treading a rapidly thinning layer of ice with massive ice road trucks, Neeson has to run against time in order to rescue 26 trapped miners in Manitoba. Contending with a brutal terrain, mechanical beasts, and malicious saboteurs, Mike and company have to perform some gigantic maneuvers by the time “The Ice Road” approaches its ending.

Hitting the digital streaming platforms on June 25, 2021, “The Ice Road” is directed and written by Jonathan Hensleigh. Playing a trucker by the name of Mike McCann, Neeson is joined by Marcus Thomas as his brother Gurty. Laurence Fishburne stars as Jim Goldenrod, Benjamin Walker as Tom Varnay, and Amber Midthunder as Tantoo. Let’s now delve into all that the ending of “The Ice Road” entails. Warning: Spoilers ahead!

What is The Ice Road About — Plot Synopsis

The Ice Road follows Liam Neeson on his new high-octane action endeavor, and this time he’s battling one of the coldest rivals yet — ice. It all starts with an explosion at a mine in Manitoba, Canada. The accident leaves all the 26 miners working there trapped, with no way out. Making an already harrowing situation even more hopeless is the limited and quickly depleting supply of oxygen the miners have to make do with until help arrives.

Meanwhile, we meet two of the main protagonists of our story —Mike and Gurty McCann. The Gurty brothers have a tendency to hop from one job to another. However, it’s not a fault on their part. Gurty, the younger of the two, is an Iraq War veteran who suffers from PTSD. This invites the pricks to make fun of his condition and pass derogatory remarks. After one of the truckers derogates Gurty with an offensive term, Mike gifts his face a deserved print of his knuckles. Subsequently, the trucking company the brothers work for fires them.

As is the routine for the brothers, they swiftly move on to another gig. Mike hears about a job involving ice road trucking in Winnipeg. The brothers take the job and we soon meet the other characters in the main roster. We meet Jim Goldenrod, the trucker that leads the rescue mission to deliver the wellheads to the mine. Jim hires the McCann brothers and a young lady named Tantoo. There is another member that joins the truckers on the mission. Tom Varnay is the fifth member who joins the rescue as the insurance guy for Katka, the company that owns the mine.

The rescuers get the consignment and are promised $200,000 for the rescue mission. Katka’s general manager George Sickle tells them that the rescue plan involves blasting a tunnel to free the miners. And so the rescuers set off for the mission. Three trucks, determined truckers, and an unforgiving journey. As the truckers navigate through the perilous terrain, it’s not just the ice that poses dangers to their lives. We soon learn that someone amidst the truckers is an impostor trying to sabotage the mission. Meanwhile, the miners also learn that the company they work for isn’t exactly keen on getting them out alive.

The ending of “The Ice Road” is a climactic action-heavy affair. Mike and Gurty, along with others in the rescue mission are oblivious of Varnay’s true intentions at first. However, as things start going awry, the trust among the rescuers starts to breach. The first biggest hurdle that Mike and company face is when Goldenrod’s engine breaks down. He gets on with the repair but midway through the process, the ice beneath him starts cracking. As the ice breaks, Goldenrod’s leg gets trapped. After struggling and trying to wriggle himself out, Goldenrod comes to make peace with his situation. Accepting that he has no way out, he calls out to let go of him and his rig, freeing the other two trucks. Mike, Gurty, Tantoo, and Varnay survive as Goldenrod sacrifices himself to save them.

Varnay manages to convince Mike that Tantoo was behind the sabotage that led to Goldenrod’s death. Tantoo denies the allegations and reveals that she has a vested interest in the rescue mission. She informs them that one of the miners is his brother. However, as they continue to question her, she escalates the situation by pulling out a gun. Gurty manages to disarm her though, before tying her up. The men then get on to repair the trucks. However, that’s when the McCann brothers learn that they were wrong to apprehend Tantoo. She wasn’t the one who sabotaged Goldenrod’s rig, Varnay was.

After repairing the trucks to resume their mission, Varnay locks Mike and Gurty inside their rig. We learn that Varnay sabotaged Goldenrod’s rig, and his mission has always been to sabotage the whole mission. After locking the brothers inside, he knocks down Tantoo and puts her in the truck, and drives off. Before driving off, he has left dynamite in their truck to diminish all chances of survival. Varnay looks back at the site when the bomb sets off and presumes that they’re dead. However, the McCann brothers survive.

We learn that Varnay’s goal from the start was to dispose of the miners and the rescuers. Posing as an actuary, Varnay embarks on the mission to ensure the wellheads don’t make it to the mine. Why? Well, if they do, and the miners survive, it’ll propel an investigation into the operation and subsequently, to the Katka CEO’s corrupt cost-cutting. CEO George Sickle doesn’t want the news of his minimal wage system to come out. To make sure that doesn’t happen, he orders Varnay to carry out the sabotage, and Varnay goes to extreme lengths to execute it.

The action is amped up to an eleven by the time “The Ice Road” reaches its climax. After Varnay’s ridiculously persistent attempts at impeding the rescue mission, the McCann brothers give him a run for his money. However, the pretend-actuary has a knack for surviving and coming back. All the while, there is the behemoth issue of a frozen ocean for the rescuers to contend with. Mike repeatedly tries to get rid of Varnay but he keeps surviving. A recurring pain for the lot, Varnay manages to inflict great hurt to Tantoo. However, Mike and Gurty save her and resume their journey. During his greatly determined efforts at sabotaging the mission, Tom causes Goldenrod’s death, blows up a truck, and triggers an avalanche. However, Mike does manage to get the upper hand amid a high-octane action sequence.

Do the Miners get Saved — All those who Survive.

The ending of “The Ice Road” sees a lot of mayhem and the tragic death of Gurty. He dies while trying to stop the truck from sliding through a gap after the bridge collapses. He ends up being crushed between the gate and the truck. Consequently, Gurty dies, but not in vain. His sacrifice enables Mike and Tantoo to make it to the mine in time. Mike comforts the dying Gurty and bids a heartbreaking goodbye. At the mine, they successfully bring in the wellhead and all the miners are rescued to safety. The survival of miners also means that George Sickle’s wrongdoings are finally exposed. Mike manages to land a hefty punch to Sickle before his arrest. Tantoo reunites with her brother.

The ending scenes of “The Ice Road” show Mike and Tantoo three months after the events took place. While Tantoo now works at Goldenrod’s garage, Mike has brought a sweet rig for himself. He has named his truck “Trk Trk Trk”, a name that Gurty recommends early on in the film. Although now Mike does fairly well for himself transporting sporting goods, we do get a nod for a possible sequel. However, only time will tell if Neeson ever returns for “The Ice Road” 2.

The Ice Road is currently streaming on Amazon Prime Video in the UK and on Netflix everywhere else.

Also Read: The Luminaries Ending Explained: Heat Happens At The End Of The BBC Miniseries