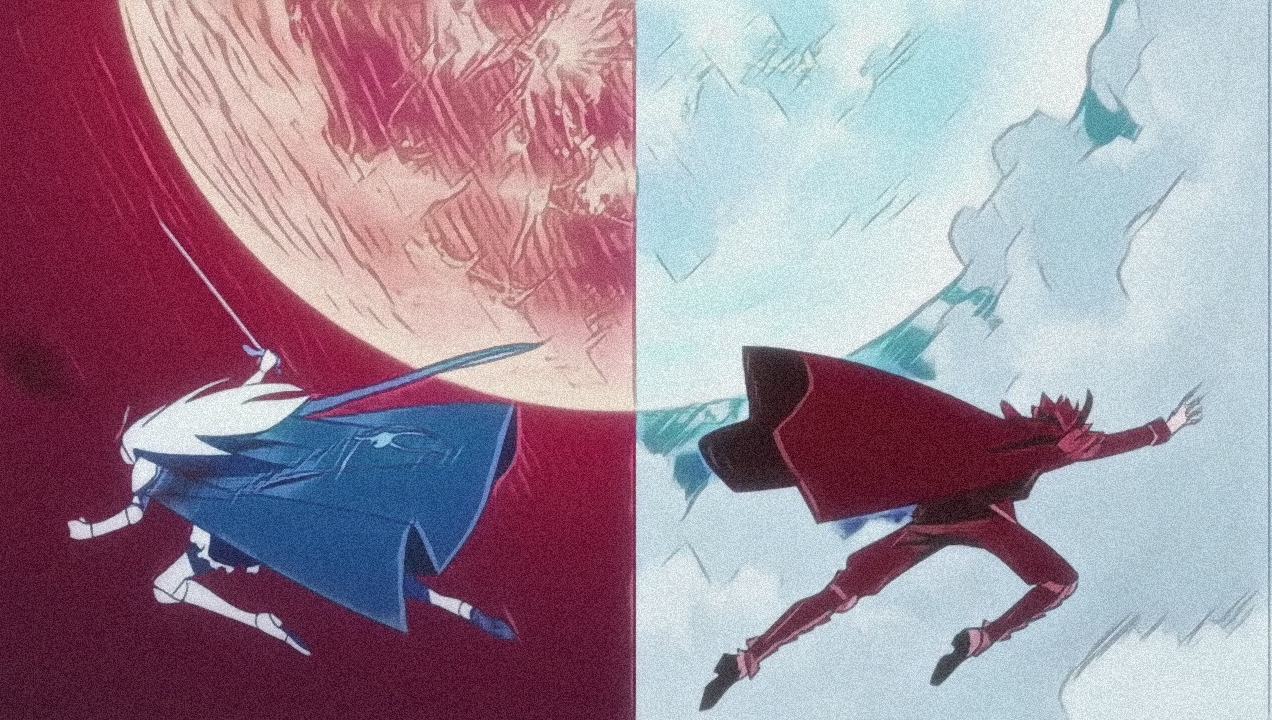 The Devil is a Part-Timer! aired its first season in 2013. The season had 13 episodes that ran for about 25 minutes each. The anime has been adapted from a light novel written by Satoshi Wagahara. Later the light novel was illustrated into a manga by Akio Hiiragi. So far, the manga has 27 volumes. The light novel came to end in August 2020, seven months after which a second season of the anime has been announced. The license for the animation of the light novel was acquired by Funimation. The anime was finally animated under White Fox studio and produced by Sotsu, Lantis, Pony Canyon, magic Capsules, and Infinite.

The anime falls under the genre of Supernatural and Comedy. However, it eventually almost turns into a harem. It’s pretty clear from the name that the story concerns the Devil. The vibes that come with the anime are dark but the majority of its content is comedy. Rather than being an intense anime, it is actually very laid down. Looking for an anime for a quick light watch? Or looking for an anime to recommend to your friend who recently started getting into anime? Or are you trying to get into anime and are looking for the first anime to watch? Well, The Devil Is a Part-Timer might just be the one for you.

Devil is a Part-Timer Season 1 – Recap 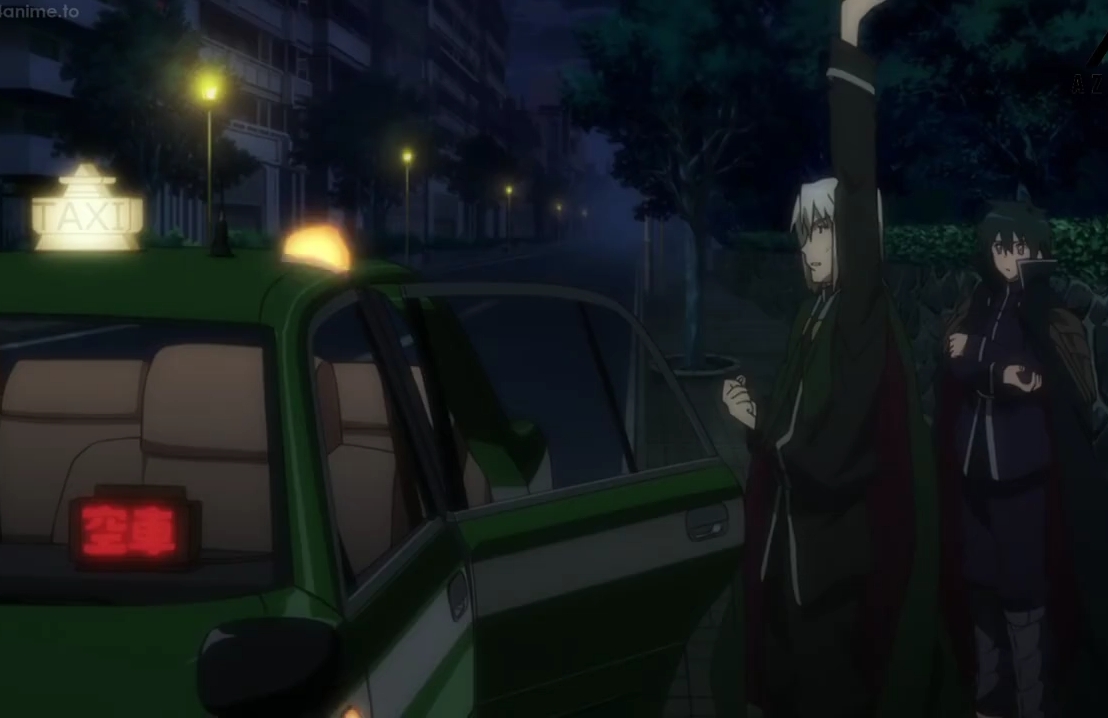 Satan and Alsiel stop a taxing while attempting to do some magic after entering the earth.

The story begins with Satan’s attempt to dominate Ente Isla with an army of demons. He spreads chaos throughout the nation until a Hero interferes. The is Hero is later identified as Emilia. Satan escapes her wrath by teleporting himself away from Ente Isla but ends up on Earth with his loyal servant/general Alsiel. The land in Tokyo, younger in looks and are unable to return to Ente Isla or their own world.

Satan ends up living on earth for a long time without his powers. He picks up a fake alias. Now, he has the identity of Sadao Mou and Alsiel renames himself as Shirō Ashiya. Sadao starts working part-time at Mg Ronald, a local fast-food restaurant. Thus begins his journey of living an ordinary human life that surrounds him with a job, bills, and common relationships.

Read:   Interesting Facts About Konohamaru You Should Know

The actual story begins when he finds out that Emilia the Hero had also been teleported into Earth while following satan. The Devil is a Part-Timer depicts the lives of this hero-villain duo as they survive on earth as complete commoners while keeping an eye on each other.

A lot has happened in The Devil is a Part-Timer throughout the first season. First, we see the Devil enter earth with Alsiel. Then we see Emilia follow him here. Later, we see Lucifer is also on earth and gains the guise of Hanzo Urushihara. Lucifer works with Orba, a member of the Church of Ente Isla, and causes anarchy on Earth. We also see more characters from Ente Isla, like Suzuno who has arrived here to kill Sadao (Satan). Long story short, there are a lot of people on earth due to Sadao. Talk about popularity! The anime at this point has become a reverse isekai.

So far, we know that Sadao’s power comes from feeding on the negative energies of people. However, he has stopped feeding on negativities as he has grown a likeness towards humankind. Also, Chiho, a cute human from Sadao’s workplace seems to have a crush on him and now knows everything about him. The main antagonist, Sarue is also introduced. 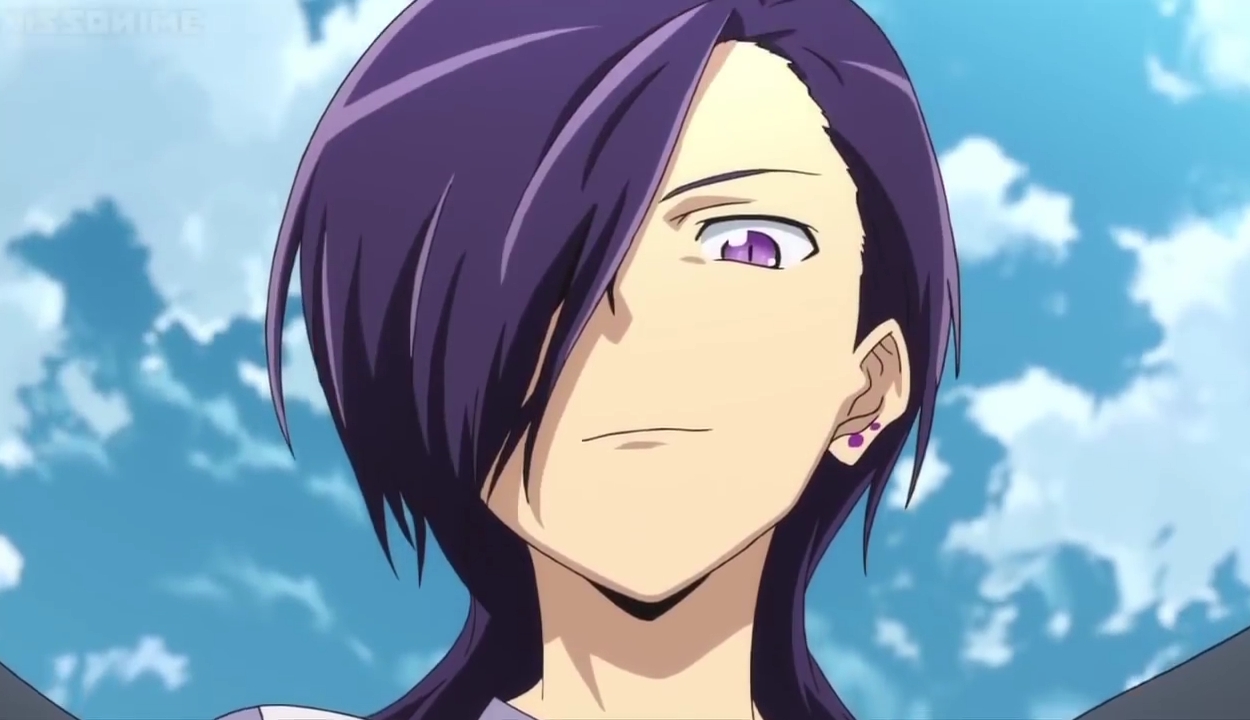 Lucifer appears on earth after getting strong by feeding on negative emotions.

The climax begins from episode 11 when Suzuno reveals that she works for Sarue. She is actually an assassin, though she does not exactly like her job. Suzuno has got orders from Sarue to kill Satan. Sarue, who had strong magic nullifying abilities, abducts Chiho. He then introduces himself as Archangel Sariel. His goal is to attain the sword from Emilia so he tortures her to give him the sword.

Sadao finds out about Chiho’s abduction and goes to save her. Orba who has a hand in this goes to Ushihara and seeks his help. Orba brings the moon closer to the Earth as Sariel derives his powers from the moon. In episode 12, we see the final face-off between Sariel and Satan. Sariel has a revamp in his powers due to the increased size of the moon. However, a large amount of negative energy such as fear is emitted by people from seeing such a big moon. Sadao feeds on these negativities and gets stronger.

At the same time, Orba is knocked down by Ushihara that erases the effects of his magic– thus making the moon go back to its regular size. Sadao defeats Sariel and saves Chiho and Emilia.

The Devil is a Part-Timer Season 1– Plot analysis 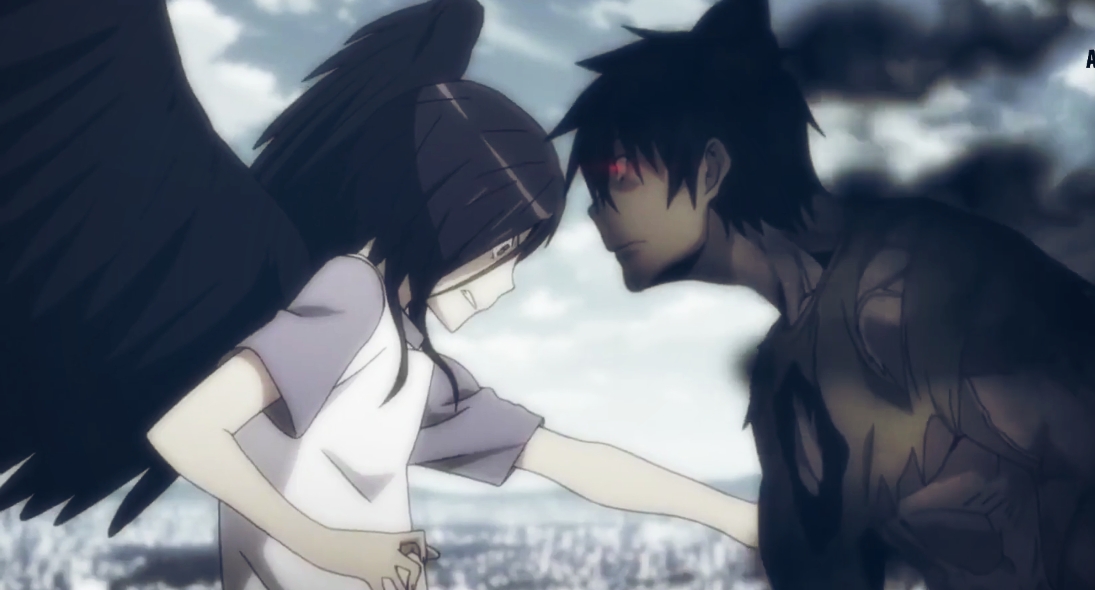 Sadao in his true form in the battle of Lucifer Vs. Sadao.

In season 1, a lot of things were left kind of in a middle. Sariel might be defeated but it’s not like he won’t cause further problems. Moreover, Emilia’s allies from Ente Isla barely got any screentime. The anime could be a comedy genre but leaving the story midway to focus on humor is quite frustrating.

Also, Sadao and his generals as well as Emilia is still stuck on Earth. Will he go back? Or will he remain a part-timer at Mg Ronald’s throughout his immortal life?

Sadao seems quite popular among women too. The first season shows many potential romantic sparks between the Hero and Satan. Since romance is a genre of this anime, it is quite interesting to wonder who Sadao would end up with. Those who have read the light novel might already know the answer to this but it’s interesting to wonder the turns season 2 will take to reduce the damage done by the light novel.

The Devil Is a Part-Timer Season 1: Review

The anime began in 2013 and ended the same year after 13 episodes. The number of episodes was well chosen as it makes the anime not too long that it becomes unbearable nor too short that it feels rushed. The anime has a simple storyline about a Devil who gets teleported to Earth which is executed pretty well. The general idea is not too intense which makes it a pretty great light anime. The fight scenes are not exactly epic but they are indeed understandable and neat. The anime goes in a unidirectional flow without huge surprises. However, this is actually a good thing since it helps people get a better insight into the characters without thinking too hard about them.

One great thing about this anime is its humor. The anime will definitely make you laugh, especially with Emilia’s constant spying and as she tries to figure out his big master plan while all Sadao is doing is trying to gain some domestic experience. The jokes are clever and the anime bestows some quality content to us in terms of a comedy anime.

The character development is also finely executed. We see Sadao grow from a ruthless Devil to a human-loving harem protagonist. He also starts wanting to understand humans and even stops feeding on their emotions even if it means that he will be left powerless. Another significant character development comes from Emilia, who goes from hating Satan and wanting to kill him to actually seeing his change and siding with him. The progression is gradual and well witnessed by the viewers. However, my personal favorite character development was Lucifer. He goes from being a badass evil to protecting his lord in the end. Not to mention, he becomes a shut-in and an otaku, much like the rest of anime-loving weebs. Lucifer is a total mood no matter how you see it!

The Devil is a Part-Timer Season 1: Main Cast and Characters 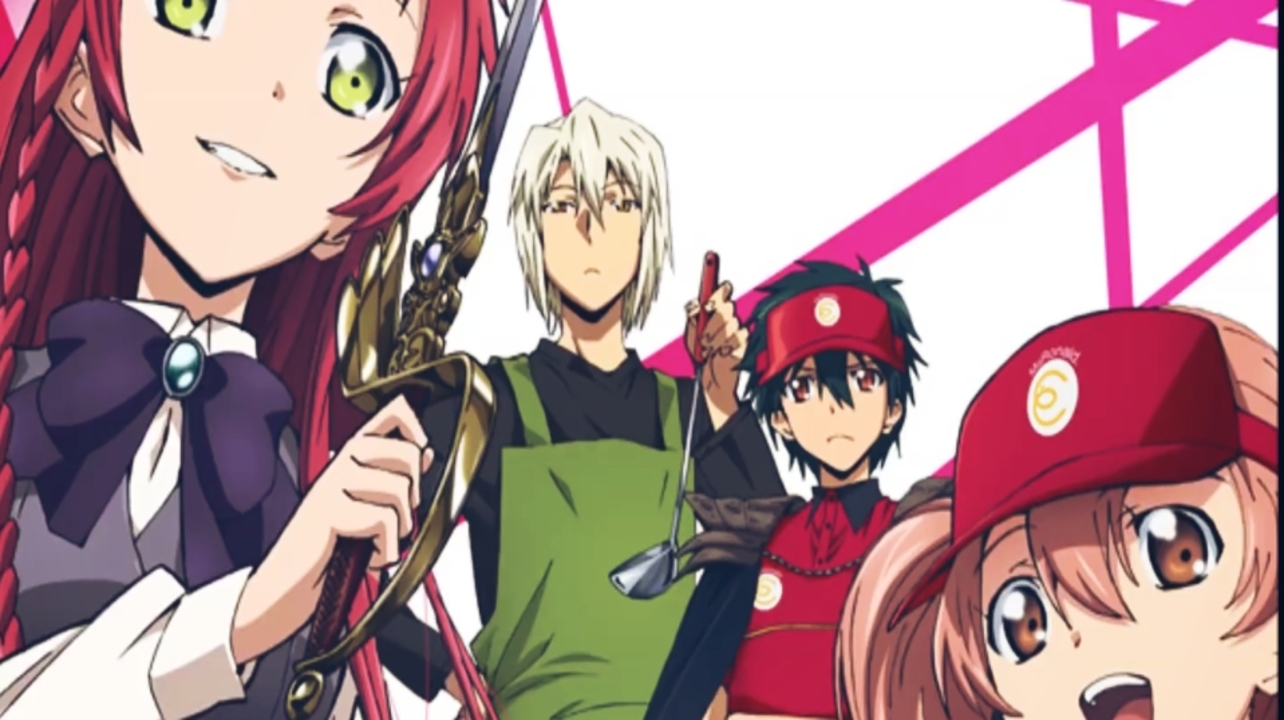 The main characters of the anime Devil is a Part-Timer: Season 1.

The anime has a fun set of characters and a remarkable cast that voices them. Satan, the cynical devil who is later known as Sadao is voiced by Ohsaka Ryota. You can identify this character from many roles such as Akashi Keiji from Haikyuu and Marcus from Shingeki No Kyojin. The hero, Emilia, who follows Satan to the world of humans was voiced by the same voice actress who dubbed Utahime Iori from Jujutsu Kaisen and Mio Akiyama from K-on, Hikasa Yoko.

The loyal servant, Alsiel is voiced by Ono Yuki who voices Tetsu in Servamp and Kagami Taiga in Kuroko no Basuke. The notorious character Lucifer is voiced by the never-growing voice actor, Shimono Hiro. He also voiced characters like Connie from Shingeki No Kyojin and Zenitsu from Kimetsu no Yaiba. Chiho, the part-timer at Mg Ronalds who has a severe crush on Sadao is voiced by Touyama Nao. Touyama also voiced popular characters like Hebiichigo in Boruto and Shiro Enjouji in Kokoro Connect. Finally, the antagonist, Sarue is voiced by Igichi Yuichi, popular for dubbing characters like Max Alors in Fairy Tail and Genshiro Saji in High School DxD.