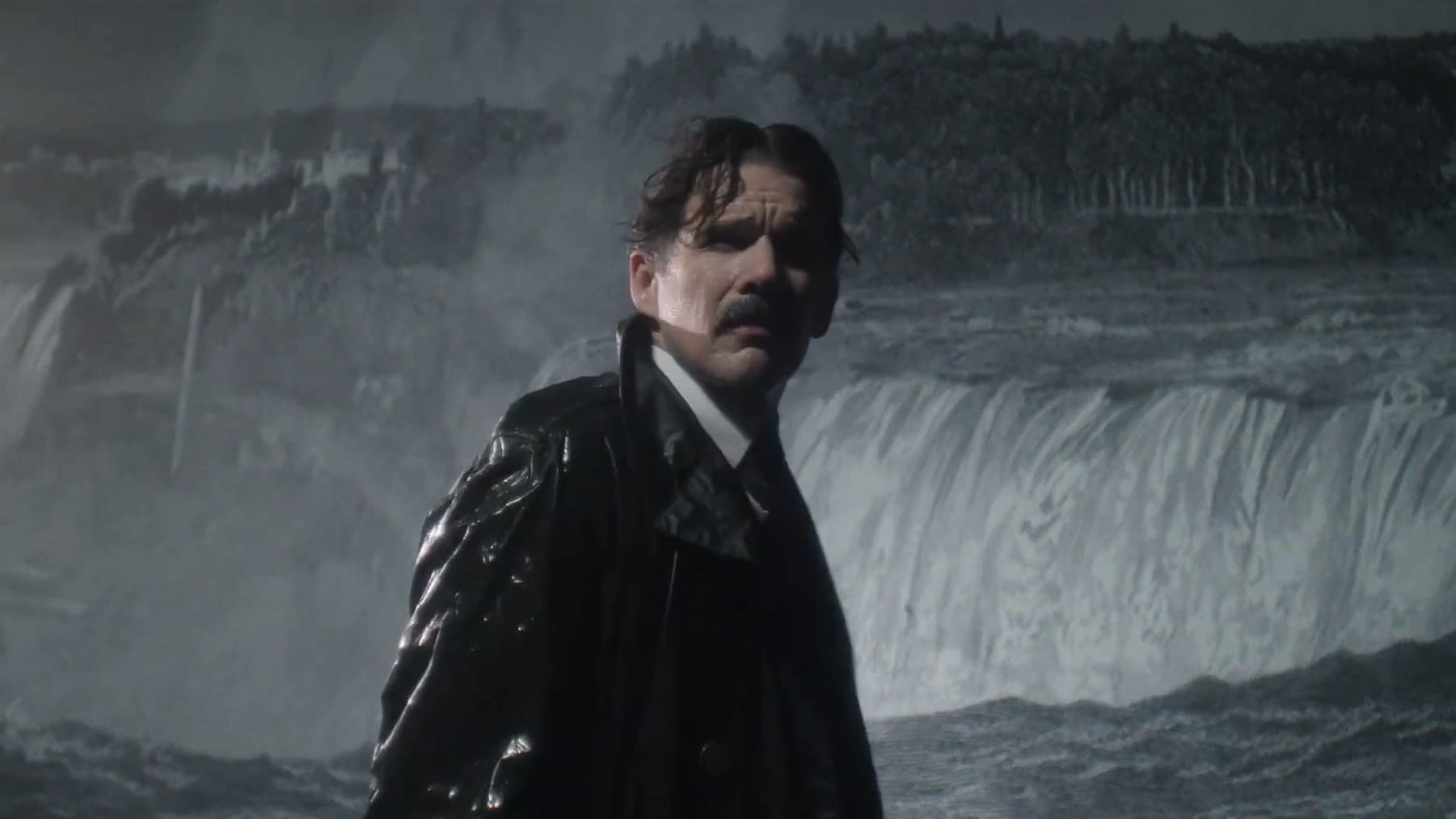 Nikola Tesla is a visionary inventor, played by Ethan Hawke, who fights to fulfill his dream of bringing his revolutionary electrical system to people. He faces a lot of challenges in his way of breakthroughs in transmitting electrical power and light because of the worldwide wireless energy. He interacts with Thomas Alva Edison, the greatest inventor of America, and J.P. Morgan’s daughter Anne to transform his thoughts into reality.

Nikola Tesla first saw electricity while petting his cat when he was a child. When he grew up into an adult, he works under Thomas Alva Edison, played by Kyle MacLachlan, in 1884 New York City. Edison did not see him in a special way and didn’t look highly at him; the reason may be because Edison’s wife had just died. One day they got into a conflict during work and smashed ice cream cones on each other’s faces.

Anne Morgan, played by Eve Hewson, the narrator of the movie, appears with a laptop and says these are not the only things that happened to him. In Google, only a few pictures of Tesla appear, and it has no mention of his invention of the first flash of the motor. She also says in Google there are twice about Thomas Edison. She then proceeds to say about Tesla’s past and inventions. 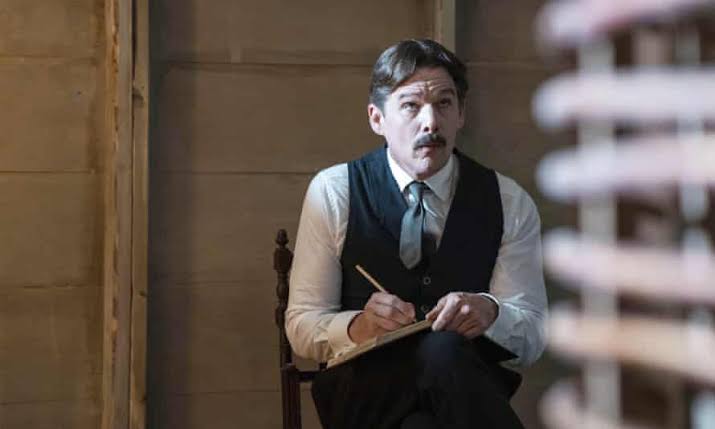 Tesla had troubles earlier in his life and wasn’t financially stable until he was able to find a few people who was willing to pay him more than Edison. Tesla, along with his friend Anthony Szigeti from Budapest, worked on his induction motor. They received praise for it, and Tesla then meets Anne, J. P Morgan’s daughter. Tesla reveals the idea he came up with, George Westinghouse. He lets Tesla know about the rivalry between him and Edison’s invention, as Edison puts a lot of effort into execution. Edison rejects Tesla’s alternating current, stating that direct current is better. Tesla says that someone beat him too, as his friend Szigeti showed him one of his inventions. He decided to leave the town and find other ways to earn. On the other hand, William Kemmler becomes the first person to be executed with electric induction. And Tesla started dating Anne, even after knowing his father is one of Edison’s friends and also funds him.

Tesla’s machine powered the World’s Fair in 1893, and he was highly successful, as everyone praises his alternating power supply. Edison realizes his mistake and apologizes to Tesla, and offers him to work together. But, this meet never happened, and they never reunited. Westinghouse tells Tesla that they need good funders to fund them, as their business is not doing good. And Westinghouse would go bankrupt if he paid Tesla completely what he owed. Tesla gave up his horsepower clause, tearing up their contract as he had no other way but to accept the merger.

Tesla slowly starts liking a famous actress Sarah Bernhardt who gets a large audience by performing in different places. One day, everyone goes to see her act, and Edison and Tesla meet there. Edison was angry and indignant at Tesla’s successful inventions and research and leaves.
Tesla moves to Colorado and develops the Tesla coil. The coil was impressive, and its blows up the local generator. Tesla shows his researches and machines to J. P. Morgan and the advantages of using the machine. Earlier, Anne also suggested her father be his investor after speaking about his works. Though Morgan wasn’t completely satisfied with his work, he still agrees to fund him.

Meanwhile, Edison shifted his business from electricity to mining but failed miserably, and he loses a lot of money. Then Tesla opens in an interview that the machine he is working in could pick up signals from Mars. Tesla asks Morgan for more money for his funding and explains he is developing a technology to map brain waves. Morgan doubts him and thinks that his experiments and machines are not going to work. He puts him aside and plays tennis with his daughter. Tesla then sings in an imaginative way, “Everybody Wants to Rule the World.” Anne then asks Tesla if he wants to take the relationship forward as they were drifting apart. She moves to the French countryside and works for child health services and camps.

She also says that Tesla lived longer than Edison, Morgan, and Westinghouse and died at the age of 87. She then remembers what Tesla told as she thinks that he might either overreach or live in the world he dreamed of.

Direction and Production of Tesla-

The movie is released on January 27, 2020, and had its world premiere at Sundance Film Festival. And released in theaters on August 21, 2020, The movie is 102 minutes long. The movie was a low-budget movie. It had a budget of 5 million dollars and received a box office of 401,332 dollars.

Casting and character analysis of Tesla

Nikola Tesla, the protagonist of the movie, is played by Ethan Hawke. He was an American inventor and contributed a lot to the design of the modern alternating current electricity supply system. He was born in a low-income family, was penniless. He worked in a New York City hotel. He spends hours on his scientific research and experiments. Though he once worked under Edison, he never had a good relationship with him. Tesla didn’t have the business mindset that Edison and others had. Ethan’s performance was unbelievably brilliant and attracted the audience throughout. He delivered the right emotions to the character and nearly saved the movie. 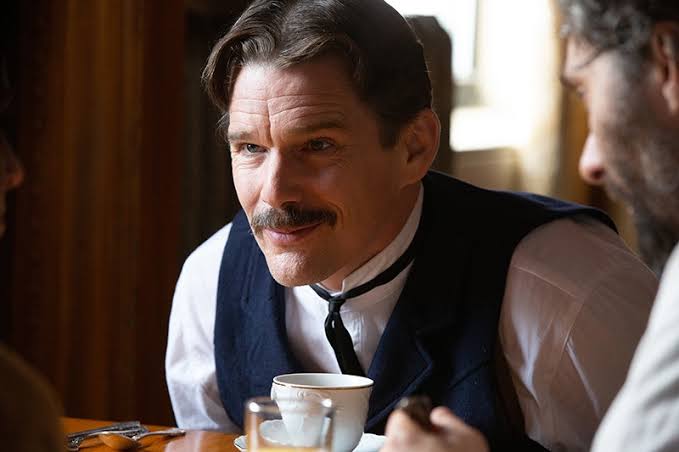 Anne Morgan was the narrator of the story, played by Eve Hewson. Anne is believed to have a crush on Tesla, though the feelings were a bit exaggerated in the movie.

Critics and Audience review of the movie

Though this movie was based on a true character, and also his biography was published in a few books, including Tesla: Man Out of Time. But the film had little connection with the actual person. It failed to portray the character, Tesla, and his research and him being an outstanding and one of the most significant inventors of all times. The character looks sulky and left out most of the essential things that he has done and his contribution to the present world.

Tesla is one of the most influential figures in the science field; there are a lot of documentaries and books written about him; the movie has been a disappointment to the audience and people who love science and is an admirer of his work. Ethan Hawke’s acting was the only good thing in the movie. The characters lacked detailing and connection with reality. The whole storyline seemed confusing and was totally scattered in all places. The plot was too slow to follow and develop interest and mostly bored the audience.

The film was a low-budget film, and a few scenes were awful. It really didn’t compliment the movie, neither the situations. The tones used in the film was bizarre. The screenplay and the director failed in creating bonds with the audience, as most of the scenes didn’t make sense. The last scene where Tesla sings a song was unnecessary, and many people considered it disrespectful to the legendary inventor. The movie omitted all the vital and crucial things, and also his early life. He was a unique and interesting person, so there were a lot of things that could be added. The movie all over underestimated his struggles and his discoveries. It is because of him electrical system exists. The movie was a disappointment all in total. My ratings for the movie Tesla- 2/5.