Let's get to know some underrated couples from romance animes who don't get that much love from anime watchers! 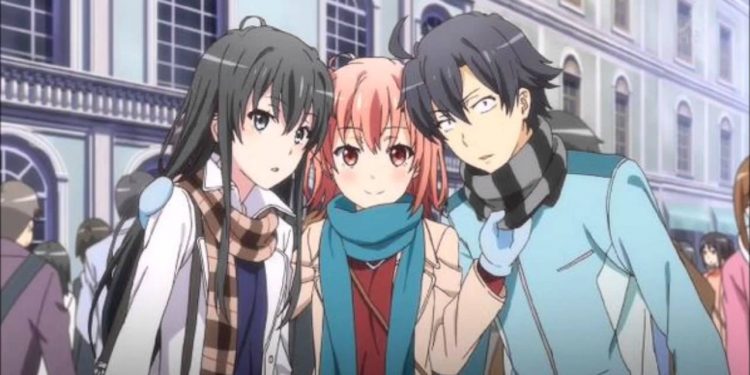 Watching a romance anime is always an exhilarating experience as they contain meet-cutes, silent pining, extravagant and realistic courtship, and heartbreak all at once. A good romance anime does not depend on cheap tricks like cheesy tropes or too much show of emotion. Rather they try to show a part of the authentic human experience on this planet. Watching just action anime series can get a bit tedious and boring. That’s why one must spice it up with some good old romance! A good romance in an anime can make you fall in love with love again if you think this world has made you too cynical. They will make you laugh and cry at the same time as well as make you want to be in a relationship.

Now, if you are a romance anime fan, then you must have seen some of the shows like Maid-Sama, My little monster, Kimi Ni Todoke, Golden time, or even Gekkan Shoujo Nozaki-Kun. But here, in this article, we’ll talk about all the underrated romance anime couples you may have missed along the way. If the popular romance animes did not already give you unrealistic expectations of love, then watching these surely will.

The anime Tsuki Ga Kirei is a story of young love between two students in their final year of junior high. Akane Mizuno is a member of the school track team, and Koutaro Azumi is an aspiring novelist. Two totally different people, but somehow they end up falling for each other. And it takes more than convenient seating positions and a few chance encounters for their hearts to finally be in love. The animation and art style of this series is beautiful and fluid. The color palette brings in a sense of warmth and belonging for the watchers, which is something essential to the idea of love.

There is nothing particularly extraordinary about our couple. But their cute interactions and reservations, in the beginning, make them more believable as two young people in love. And there’s always something amazing in the simplicity of the ordinary romance.

Scum’s Wish is a melancholic tale of two teenagers who are in a relationship with each other to forget the ones they truly love. The anime does not have the nicest title or the nicest story. Hanabi  Yasuraoka has been in love with her neighbor Narumi Kanai forever, so when she has him as her homeroom teacher, she is possibly elated. But  Narumi gets attracted to the music teacher  Akane Minagawa and relationship blossoms between them. Mugi, who was in love with Akane, gets heartbroken.

Due to a few chances encounters, Mugi and Hanabi get into a relationship with each other to forget their woes. This is not a healthy, happy relationship, but I would call it tainted teenage love. But the couple does treasure each other as individuals, and slowly their bond grows. The relationships take a lot of effort, and sometimes they are not reciprocated. It is a portrayal of difficult and adult life. So, for the fans who want a bit more realistic and adult love in their animes, this is a must-watch!

Now Nana is cult-classic amongst Josei anime lovers. Written and illustrated by Ai Yazawa, the anime follows two girls named Nana who are polar opposites but somehow find friendship and solace in each other. After watching the anime, most people talk about Nana Osaki and Ren’s relationship. But not many mention Nana Komatsu or Hachi’s relationship with Nobu. Both of them were very expressive with their love. And Nobu was just right for her after she had been left and strung on by those other guys. However, this couple’s moments were short-lived as Hachi gets pregnant with Takumi’s child and decides to marry him. Since Hachi is weak-willed, she thinks she needs someone like Takumi and goes with him.

Kaname and Sousuke appear in the mecha anime series titled ‘Fullmetal Panic!‘. They are honestly perfect together even though they are complete opposites of each other.

Kaname and Sousuke are featured in the Mecha series: Full Metal Panic! If Mecha’s aren’t your cup of tea, you’ll change your mind after watching this series. As I did. Kaname is very practical, and her no-bullshit attitude always seems to help out Sousuke. And Sousuke always protects her during any combat situations. Their personalities balance each other out, and that’s why their bond is so special.

Definitely give the anime a watch if you are looking to get into the Mecha genre.

5. Origin: Spirits of the Past – Agito, and Toola

Origin: Spirits of the Past is a sci-fi film about a world that is totally different from ours. In this world, some 300 years in the future, forests, and plants have gained sentience. The protagonist Agito finds a girl, Toola, sleeping in a strange machine. He realizes that she may be the key to achieving peace between humans and the trees. The film is great as a sci-fi film, but the special bond between Agito and Toola makes it a great romance anime as well. The animation is also very good, the credits of which goes to Studio Gonzo.

Kaoru Kamiya and Kenshin Himura are featured in the historical anime series titled “Rurouni Kenshin.” They are a very chill couple. Kenshin is a calm and collected swordsman fighting with a special reverse-ended blade which makes it impossible for him to kill his enemies. Kaoru is a very kind-hearted woman who loves Kendo and has her own Dojo. The anime has 95 episodes and a couple of OVA episodes.

My teen romantic comedy SNAFU is a 2013 anime series about some high school students who have problems developing real relationships. So they come together to form their own club. Our protagonist Hachiman is a loner with no friends in the beginning. Throughout the anime, he learns to be more social with his classmates and peers. When he meets Yukino, he thinks of her as a haughty and cold-hearted ice queen. However, they slowly find out that they are very similar to each other in the way they are ostracised by others. Hachiman tried to use this as a way to befriend her but was immediately turned down.

They develop a banter-based friendship that slowly blossoms into romance. Yukino admires Hachiman because he can be unabashedly himself.

Now, SKET dance is a comedy series about three friends who form the SKET club at school to help anyone with any problem. They’ll do anything no matter how odd the job is. Switch is the 3rd member of the club, along with Bossun and Himeko. He wears glasses and always speaks through a computer-generated voice using his laptop, which he carries everywhere. Now, the reason why Switch does this is because of his tragic past where he loses his brother. However, the way Switch tries to get over his past trauma just to support Momoka is nothing short of a miracle.

Even Momoka, who was a delinquent before coming in contact with the sket club, turns her life around to become a pop singer. Although the anime doesn’t really spend that much time exploring their relationship, their antics are so cute that they deserve a spot on this list.

Itazura Na Kiss is a Japanese shōjo manga series written and illustrated by Kaoru Tada. The manga was super popular back in the day, and it got serialized into an anime as well as live-action series. The series revolves around a dimwitted girl named Kotoko Aihara, who has been in love with Naoki Irie since the first day of high school. He is the school captain, topper, gets good grades, and on top of that, he is handsome as hell. But he is unsocial and is very rude to Kotoko when they first meet. He even throws away her love letter. But as the story progresses, he slowly learns of all the things she does for him, even at the expense of herself. When he finally falls for her, Naoki falls hard.

Cardcaptor Sakura is another popular anime that first aired from June 2000 to December 2001. Touya Kinomoto is Yukito Tsukishiro’s best friend from high school. Throughout the anime series, Touya and Yukito’s closeness is displayed often. Touya gives Yue his powers in order to save Yukito’s life. Although their relationship is never exclusive or quite explored in the anime, their love is very apparent. Eventually, Yukito openly admits his love for Touya to Sakura after she confesses to him, notably calling Touya his “number one”.