Susana Gomez rarely shares about her private life and is in a relationship with a celebrity singer. 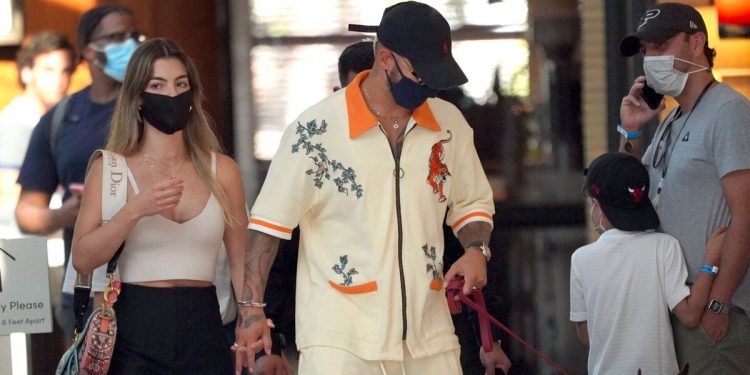 Maluma and Susana seen together in Miami vacation

Susana Gomez is gaining much limelight ever since her relationship with a famous Columbian singer got public. So, who is Susana Gomez dating? Gomez and her boyfriend’s relationship was much among the talk of the internet ever since they got seen together in 2020. Well, the long rumors came to an end this year when her boyfriend had gone public with her recently. The couple indeed had a special Christmas with Susana’s boyfriend showing off her. Yes, now, Susana Gomez is openly dating her celebrity boyfriend.

There are not many details as to when or how Susana met her boyfriend. But, they do belong from the same place that could slightly explain their meeting. She was also seen together with him on numerous occasions and outings. Gomez is also in a good relationship with the family of the singer. But, she is not into the entertainment circle or showbiz business like her boyfriend. Susana had also been married before coming into a romantic relationship with her singer boyfriend. But, her marriage did not last long as she broke up with her ex-husband.

Susana Gomez is dating Juan Luis Londoño Arias. He is a famous singer from Columbia and is popularly known as Maluma. Public and fans were already speculating that the duo were in a relationship since last year. But, the pair had neither confirmed nor affirmed the rumors. Recently, Maluma has openly shown his girlfriend at Christmas, which confirmed their relationship. Well, the rumors regarding them arose towards the latter half of last year. It continued for the whole year in 2021. Many even went to claim that his girlfriend is pregnant. At last, the rumors came to an end after one year when Maluma posted an intimated photo of them together while celebrating Christmas.

Susana and Maluma Celebrated Christmas Together

Susana celebrated Christmas together with her boyfriend and his family. Maluma posted a photo on his Instagram account with his girlfriend, which put an end to the long speculations of the public and fans. The photo was somewhat distorted and blurred. However, he is seen kissing his girlfriend, Susana, while in an intimate pose wherein he is holding her by the waist before the Christmas tree. He also captioned the post as Thanks Santa. It seems like he is expressing his gratitude to Santa for bringing him a wonderful gift. Furthermore, Susana also has a good relationship with the family of Maluma.

Susana got seen together several times with Maluma since 2020. They never said anything about their relationship despite all the rumors surrounding them. It further lead to people believing that the pair had indeed been dating. Thus, they unofficially confirmed their relationship, more or less. The rumors, even more, came around when the pair were got spotted holding hands and locking lips in August 2020 during their outings.

Gomez was also present in the celebration of Maluma’s Papi Juancho album release alongside the family and friends of the singer. If it is not short, they even sparked pregnancy rumors among his fans on social media during the beginning of this year. Maluma, at that time, posted a photo on his Instagram account wherein he got seen lying on the stomach of someone with a blissful smile on his face. Many people believed that his girlfriend was pregnant seeing the photo.

Susana Gomez is an Architect

Susana Gomez is not into the entertainment circle like Maluma or his popular ex-girlfriend, Natalia Barulich. Rather, she is an architect and has her own company specializing in interior designing. The name of her company is Ese-Ese. Susana and Maluma belong to the same place from Columbia’s Medellin. Her artistic works include several light colors, wood finishes of blonde, and textiles that are naturally produced. Susana was also previously married once but got divorced. A close insider mentioned that Susana being married was one of the reasons why Susana and Maluma’s relationship was not romantic. But, the insider also claimed of not knowing whether Maluma was the reason for her marriage breaking up or she went out with him after she became single once again.

Also Read: Who Is Maluma Dating – Seen Together With Susana Gómez