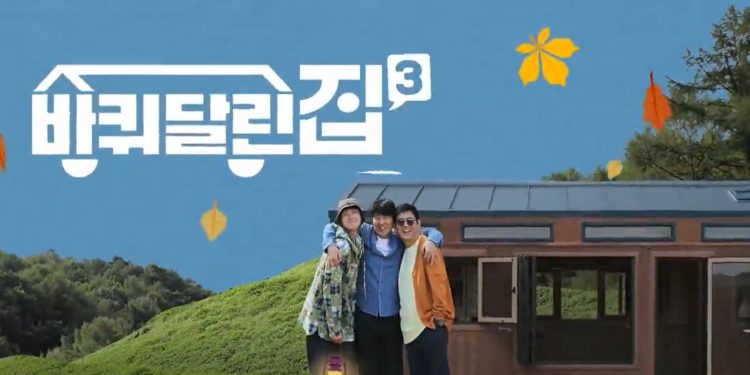 Director Shin and the fathers of ‘Reply 1988’ will continue their stay in ‘House On Wheels 3’ Episode 11. Along with their House On Wheels, Dong Il, Hee Won, and Gong Myung reached Hongcheon County, waiting for their guests when it started snowing. Soon after, they saw two men approaching them. The fathers of the global hit ‘Reply 1988’, Choi Moo Sung and Kim Sung Kyun met Dong Il after years of working together. All actors except Hee Won revealed that they have worked with each other in recent times. Getting in the car, they made their way to the front yard. Driving through the city, they reached the small town in Hongchon to get the stuff for the meal they’d been waiting for.

Cramped in between the seniors, Gong Myung had to answer who was the nicest among all of them. Not taking any risk, he said Dong Il and the jokes about his upcoming enlistment were on again. Moo Sung vibing to Anne Marie on their ride back home when others couldn’t understand anything was a major relatable moment. Reaching their destination, they arrived at the front yard surrounded by mountains and pine trees. The House on Wheels is in Dongmakgol, Hongchon. Setting up the house, Dong Il set up the fire while others went on to prep other stuff.

Gong Mung and Dong Il went straight to the kitchen to work on lunch. Taking lunch duty for the first time was a bit hard for him. But he managed to do things on his own as Dong Il prepared other things. He cut the meat up that they were going to have for lunch along with the seasoning as they reminiscence about the old memories from the show. After enjoying raw meat in snacks, the actors got back to their duties for lunch prep. They were making some eggs and braised chicken to side with seasoned meat. Everyone devoured the delicious food in front of them, along with enjoying the fire, they had to keep themselves warm. After lunch, as Gong Myung was too tired to continue, and went to take a nap. The senior actors enjoyed the fire and talked about the time they had on sets.

Also Read: Young Ro Stands Up Against Soo Ho In Episode 6 Of ‘Snowdrop’

Soon after, Gong Myung joined them, too, as the actors talked about their experience with each other on the set. As the campfire died down, everybody got up and went to the place they got for themselves to stay. A small clay house for all of them to stay and enjoy just like their time in ‘Reply 1988’. Gong Myung was too happy feeling the warmness of the place. While everybody just lay down thinking about the old times. After drinking some Deodeok Sikhye, a rice drink, the actors went on to rest. But as the place got too hot, Dong Il wanted to change spots, but nobody wanted to. With everybody sleeping, Gong Myung went on to spend some time with himself. Sitting alone outside, he eventually fell lied down under the cool air. Soon after, the seniors followed him out, too, having enough of the heat outside.

‘House On Wheels 3’ Episode 11 Release Date & What To Expect?

‘House On Wheels 3’ Episode 11 will release on December 30, 2021. With the dinner time arriving, Moo Sung and Sung Kyung took over the kitchen to make the dinner. And as they all were setting the food and table, Director Sin Won Ho arrived just at the right time! With the dinner being ready, everybody sat down to enjoy the meal. The actors told Director Shin the things they’ve done and eaten in the past 5 hours. Sitting under the cold sky with the bonfire in front of them, Director Shin and the fathers reminisce about their time on ‘Reply 1988’.

‘House On Wheels 3’ Episode 11 will be available to watch on the streaming platform Viu and channel tvN.