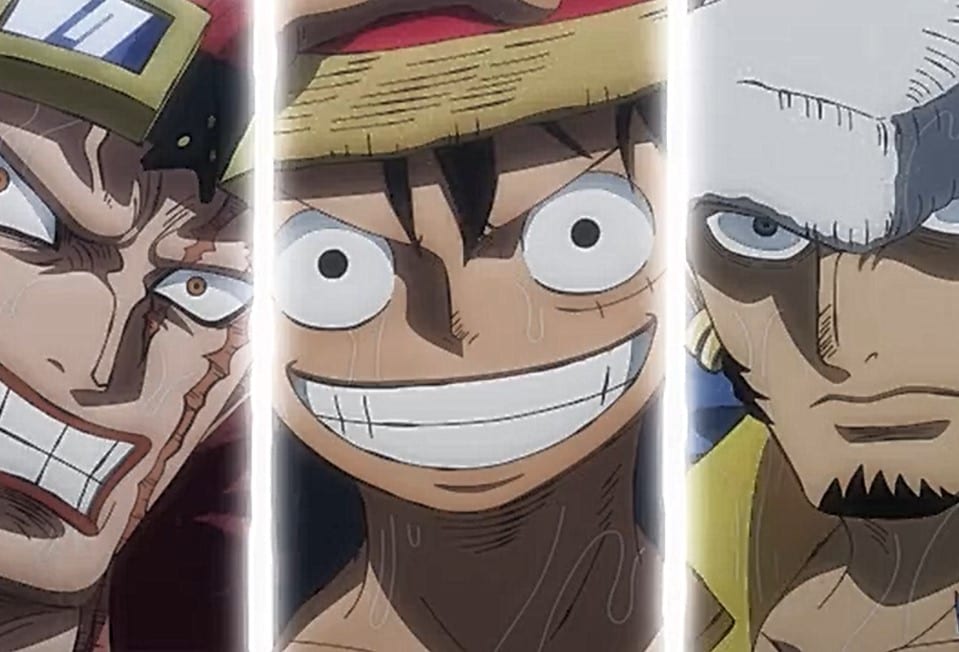 The Akazaya members who lost Oden got scattered. Toki sends the rest of the members to the future before she died. Danjuro and Komurasaki started with a mission to eliminate Orochi in private after abandoning their real names. Kinemon and the Akazaya members met with Monkey D Luffy. Twenty years later, Orochi received a letter and got furious that the Samurai came showing off that day. Kaido is sitting near Orochi drinking his beer and comments that Orochi’s spy is competent.

Orochi replies that his spy is a trustworthy man who will help them destroy the Akazaya members. He recalls the day he made an ally with his spy and promised that he would kill the guys who slash his parents. The old geezer and the old hag told their spy that their revenge has just started. Orochi tells the spy to live his life as an actual Kozuki retainer and die as Kozuki’s retainer without letting anyone know. The spy accepted Orochi’s offer and said he has been looking for a place to die as an honor.

Previously on One Piece Episode 977

The episode title is ”The Sea Is For Pirates! Raid! To Onigashima!”Plenty of troops for the raid are gathering at twilight on the day of the Fire Festival at Tokage Port. The troops are heading to Onigashima, led by the Captain of Straw Hats. Luffy raises his Katana and comments they will take Kaido down. The Samurai shouts yeah after Luffy talked about taking down Kaido. Kinemon is waiting for Luffy with the Akazaya members. Raizo is worried that Luffy is taking time to show up, and Ashura thinks the port gets attacked. 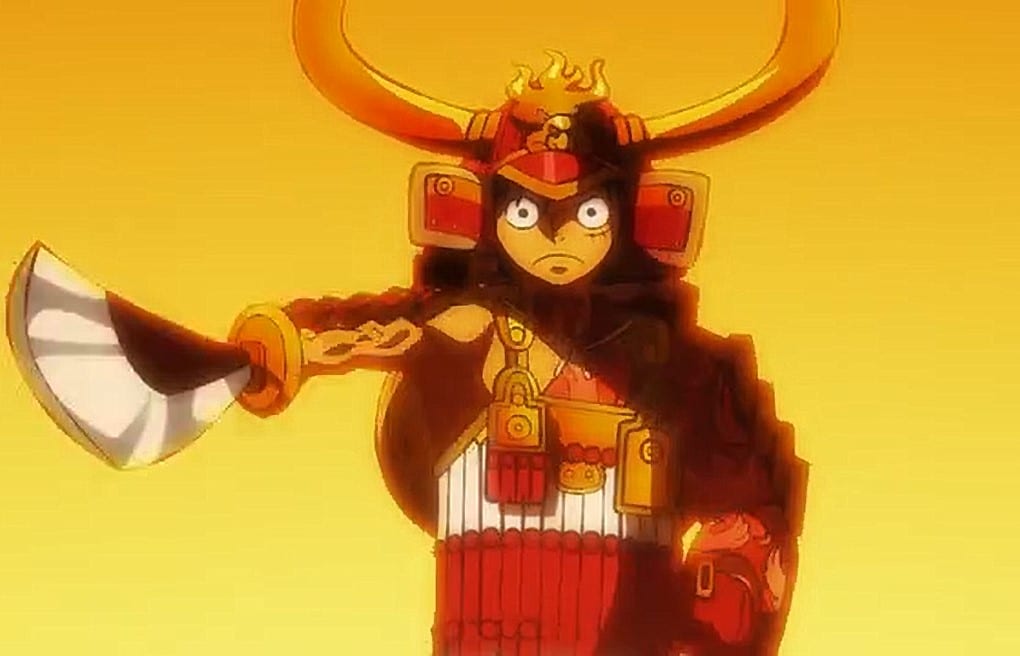 Kinemon looks at the flyer and comments that at twilight on the day of the Fire Festival at Tokage Port. The Akazaya members wonder what is happening since this is the day they agreed that they would attack Kaido and his underlings. Kinemon tries to communicate with Hyogoro and Luffy through snail, but he couldn’t connect. Moreover, Dogstorm Musketeers didn’t respond when Kinemo tries to call them. Ashura notices that Kinemon can’t stop talking about their purpose and told him to stop.

Ashura told Kinemon to look at the sky and heaven that has abandoned them since there is heavy rain and thunder. Kinemon realizes that Yasuie died a brutal death, and they have to avenge Yasuie’s death. Kinemon recalls everything and the path that he walked through with the Straw Hats. He realizes that the trio ( Luffy, Zoro, and Sanji) is mighty Samurai.
Zoro promised to slash Kaido with Emma, and Luffy vows that they are here to win against Kaido.

At the Port, Momonosuke notices that Kinemon is taking a small boat and comments that it is suicide to use the small boat in this weather. Kinemon refuses to give up and replies that if they miss this opportunity to take down Kaido now, they won’t get another chance. Momonosuke gets shocked to hear that they have to wait another a year if they don’t attack directly. Kinemon reveals that they don’t have to hide since Kaido and Orochi’s men might find them at any moment. 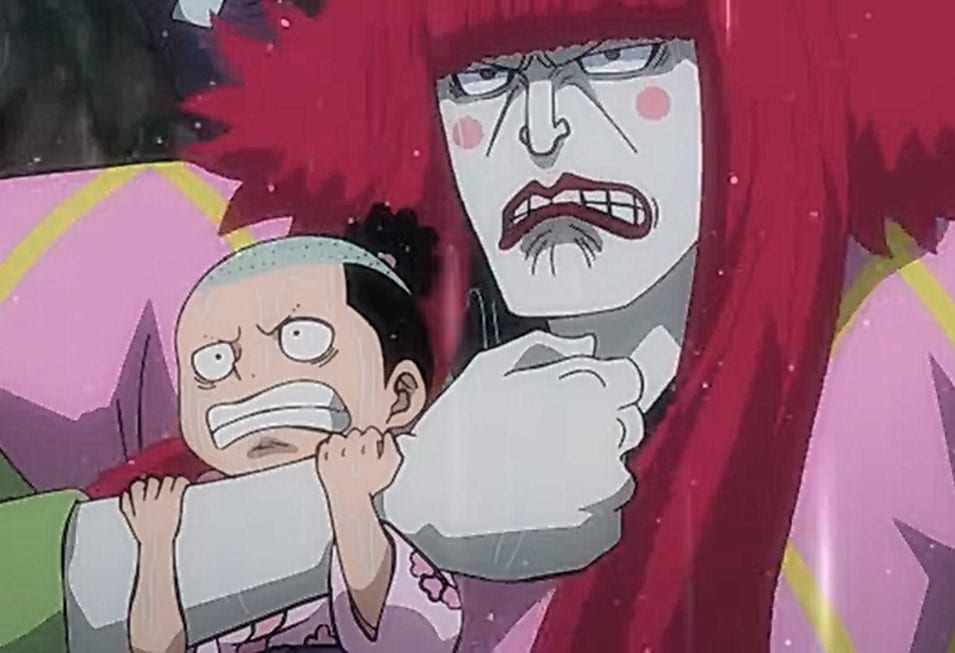 Shinobu holds Momonosuke as he tears, witnessing Kinemon and the rest of the Akazaya members heading to attack Kaido. None of the expected 4200 troops arrived, but there were signs of destructions at the port. Kinemon looked behind and told Momonosuke that they are not giving up. Once they infiltrate Onigashima, they will point a Katana at Kaido’s neck before anyone realizes they are there. The Akazaya row the boat and head towards Onigashima.

On their way, Kuki realizes that something is wrong. Kiku shouts that someone has leaked their plans again. The crew discovers that Kaido told them that they might be a spy in their castle. Kinemon remarks that he doesn’t want to know that since they have a mission to complete. Kiku suggests that Kinemon must find the guy and cut his head or move forward. Kanjuro sheds tears and said they have to clear the misunderstanding.

Kanjuro realizes that he is the one who leaked everything and wonders why these guys are fighting amongst themselves when he is the real culprit. Kinemon and the rest find that Kanjuro is the culprit and cut his head. But the real Kanjuro appears behind Yoshinobu and Momonosuke. Shinobu fights with Kanjuro, and Luffy arrives, firing some canons. Luffy apologizes that he is late. Captain Kid shouts that he won’t let Straw Hat have Kaido’s head. Kaido’s men realize that the pirates of the Worst Generation have appeared.