Female K-Pop Idols have taken over a huge part of social media platforms in all ways. Their impact is huge and their followings explain a lot. 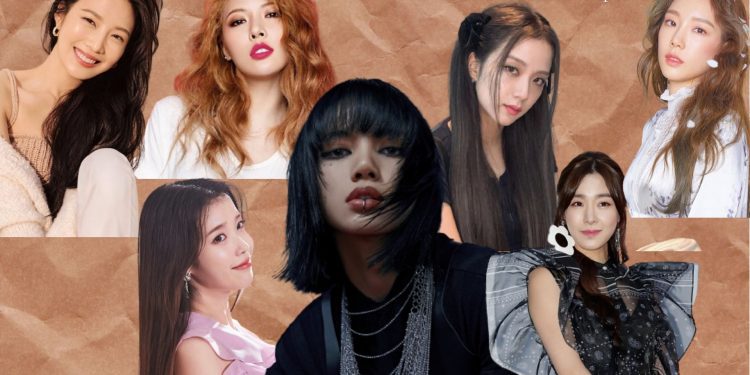 Female K-Pop Idols have taken over a huge part of social media platforms in all ways. Their impact is huge, and their followings explain a lot about their talents and skills. Coming to the K-Pop industry then their social media influence is really strong and popular. Through various global social media platforms, they have gained huge recognition all across the globe.

Several K-Pop artists have expanded their social media all across the globe, and their fans following have reached huge diversity. Fans out there love to stay connected with their favorite idols, and social media platforms are the best medium for the same. Ranging from personal to sponsored posts, the artists out there keep their fans engaged in every possible way.

Every post from them is like a big treat for their fans, and thus they can stay in touch quite easily and frequently. All in all, social media platforms have become a huge influence in today’s world, and many idols have reached record-breaking followers on their respective social media accounts.

Here, we have summarized the list of the topmost followed female K-Pop idols on Instagram. Therefore, let’s have a quick skim inside.

The South Korean rapper, singer, and dancer, Lisa is one of the renowned names in the global music industry. Operating under YG Entertainment, she is recognized as a member of the South Korean girl group Blackpink. Moreover, she is one of the most followed female K-Pop idols on social media platforms.

Since her debut, she has released and dropped many successful performances and tracks. The Korea Herald made an announcement on April 19, 2021, about the solo debut of Lisa. Finally, the rapper made her solo debut on September 10, 2021, with her single album Lalisa. The music video of the album’s lead single “Lalisa” became the most-viewed video with 73.6 million views by a soloist in a duration of 24 hours.

Since her debut, Jennie has been part of many successful projects. Apart from her group activities, she has also been ranked first among casting choices and received multiple proposals from broadcasters for variety shows.

She made her solo debut and released her album titled “Solo”. The hip-hop track debuted at number one position on the Gaon Music Chart and bagged all three titles for simultaneously topping the digital, download, and streaming charts. The song gained KMCA platinum certification, and at the 8th Gaon Chart Music Awards, it bagged the “Song of the Year”. Moreover, it brought great success to Jennie by appearing in the New York Times’s playlist.

Jisoo is recognized as one of the members of the South Korean girl group Blackpink. With her honey-like vocals and sharp personality, she is one of the popular faces in the global music industry.

Apart from her team activities, Jisoo has also appeared in many shows and drama series. For two consecutive years i.e., 2017 to 2018, she was a part of “Inkigayo” as an MC. In the year 2019, she made a short cameo in the tvN drama series titled “Arthdal Chronicles”. Her next screen appearance was as the main character in the JTBC drama series “Snowdrop”.

She also has many writing credits under her name, including the group’s first Korean-language studio album, “The Album”. She co-wrote “Lovesick Girls”, the lead single of the album. Moreover, Jisoo is also going to make her solo debut soon.

Born and raised in New Zealand, Rose is a South Korean-based singer and dancer. She is one of the popular faces in the music industry and is a member of the girl group Blackpink.

Since her debut, she has been part of many successful projects and has appeared in many broadcast programs like “King of Masked Singer” and “Fantastic Duo 2”. Her solo debut album “R” was released on March 12, 2021, and the head single “On the Ground” gained 41.6 million views in a span of 24 hours. The lead single alosa papered on the 70th position on the Billboard Hot 100. This made Jit one of the highest-charting songs by a Korean female soloist in the US. Moreover, her global fan following tripled with her appearance in the 2021 Met Gala.

The South Korean soloist is one of the most followed female K-Pop idols on social media platforms. IU is a popular singer, songwriter, and actress. Since her debut, IU has released countless successful tracks that have gained her the pedestal she is standing on today. Her career was not all sunflower and rainbows, but she managed to pull through and cement her name in the global music industry.

Apart from her music career, IU made her film debut through the Netflix anthology series “Persona” on April 11, 2019. Later she was starred as the main lead in the South Korean supernatural drama series “Hotel del Luna” which became one of the highest-rated drama series. She released her ninth EP “Love Poem” on November 18. As expected, the lead single bagged positions on several music charts, both domestic and global.

With many releases and projects in between, in October 2021, IU made the announcement about “Strawberry Moon” her digital single. Later, on December 29, 2021, she released “Pieces”, a new special album.

She is one of the bestselling artists in the South Korean music industry and has sold out many of her releases. Her debut EP “I” was released in the year 2015 and ranked in the first position on Gaon Digital Chart. Later, Taeyeon made appearances in many reality shows like “We Got Married”, “Begin Again”, and is currently acting as an MC for “Amazing Saturday”. Moreover, she has also recorded soundtracks for several successful drama series like “Hotel del Luna”, “Beethoven Virus”, and “Hong Gil-dong”.

In the year 2021, she sold out one million physical albums and twenty million digital singles. This gained her the title of one of the best-selling solo artists in South Korea.

Suzy is one of the globally popular South Korean personalities. With her golden vocals and wonderful beauty, she has gained the spot for being one of the most followed female K-Pop idols on social media platforms.

Apart from her music career, she is also well-known for her acting ventures. She stepped into her acting career with the 2011 drama series “Dream High”. Her debut gained her many future projects like “Gu Family Book”, “Uncontrollably Fond”, “While You Were Sleeping”, “Vagabond”, and “Start-Up”. Moreover, her appearance on the big screen through the movie “Architecture 101”, gained Suzy the title of “The Nation’s First Love” in South Korea. The 27-year-old artist left JYP Entertainment on March 31, 2019, and joined Management SOOP.

The South Korean singer, songwriter, rapper, and model, Hyuna is one of the known personalities of the industry. She is a former member of Wonder Girls, and after departing from the group and company, Hyuna joined Cube Entertainment as a part of 4Minute.

The group became the nation’s sensation, and thereafter Hyuna bid adieu to it. She signed the contract with Psy’s PNation and released “Flower Shower”, her first digital single. The track bagged the top-ten entry on the US Billboard World Digital Songs Sales. Later, on January 28, 2021, her seventh EP “I’m Not Cool” was released. And then she collaborated with Dawn releasing “1+1=1” their duet EP.

Joy is one of the globally recognized personalities and is known as a South Korean singer, actress, and host. She is also part of the girl group “Red Velvet” and has also been part of several drama series.

The 25-year-old artist made her solo debut on May 31, 2021, and her EP “Hello” which consisted of 6 remake songs from the 1990s and 2000s, was released. It became an ultimate success with the title track bagging number one position on multiple music charts and the album recording ranking at the first position on the iTunes Top Album Charts of 26 countries. Moreover, the title track also appeared in the Top 10 of Billboard’s K-Pop Hot 100. Soon, the EP gained her many awards and nomination at several music award shows.

Joy’s Hello was also listed as one of the Top 25 Best K-Pop songs of 2021 by NME. She made a comeback to the screen with the JTBC K-Drama “The One and Only”.

The Girls’ Generation member Yoona has bagged the spot for being one of the most followed female K-Pop idols on social media platforms. She is recognized as one of the amazing South Korean singers and actresses.

Apart from her music career, she has also been the part of many drama series like “You Are My Destiny” which brought the media’s attention to her as an actress, and also bagged the “Best New Actress” award at the 23rd KBS Drama Awards and the 45th Baeksang Arts Awards. The 31-year-old artist released her debut EP, “A Walk to Remember” on May 30, 2019. The EP charted on the Gaon Album Chart at the third position. She has been through several wonderful successes in both her music and acting career. The results have led her to various CF deals and has established her as a top idol-actress of Hallyu.

The Canadian-Dutch-Korean singer and songwriter Jeon Somi is one of the notable names in the South Korean music industry. She was a former member of I.O.I and then made her solo debut under the label The Black Label.

The 20-year-old artist made her solo debut on June 13, 2019, and released her single “Birthday”. The music video of the song recorded over 4 million views in the span of 24 hours on YouTube. The track bagged the 18th position on the Gaon Digital Chart and the 22nd position on the Billboard Korea K-Pop 100 chart.

Later, her new single “Dumb Dumb” was released on July 23, 2021, which gained 10 million views in the duration of 24 hours. It bagged the eighth position on the Gaon Digital Chart and the 9th position on the Billboard Korea K-Pop 100 chart.

Moreover, “XOXO” her debut studio album, was released on October 29, 2021. The album sold out 55,223 copies in November and bagged the sixth position on the Gaon Album Chart. It also became Somi’s first entry in the Billboard Global 200.

Tiffany Young is an American singer and a part of the South Korean girl group “Girls’ Generation”. Operating under SM Entertainment, Tiffany debuted in August 2007 and then made her solo debut in the year 2016 releasing her first EP “I Just Wanna Dance”. She departed from SM Entertainment in October 2017 and returned back to Los Angeles to pursue a solo singing career.

She released a cover of “Remember Me” on March 14, 2018, under her stage name. Her first US solo single “Over My Skin” was recorded in June 2018 under the label Transparent Arts. Tiffany released “Magnetic Moon” on August 2. The single followed the Magnetic Moon Tour, which took place from October to November 2019. With countless releases and success, Tiffany was starred in the South Korean production of the Broadway musical “Chicago” on February 16, 2021.

Later, on June 29, 2021, it was announced that she will be venturing deeper into her acting career with the JTCB drama series “The Youngest Son of Conglomerate”.